Everything You Need To Know About T. Rex’s Fearsome New Cousin, The Timurlengia Euotica

Everything you need to know about the monumental discovery of Timurlengia euotica, the terrifying missing link in the T. rex family. 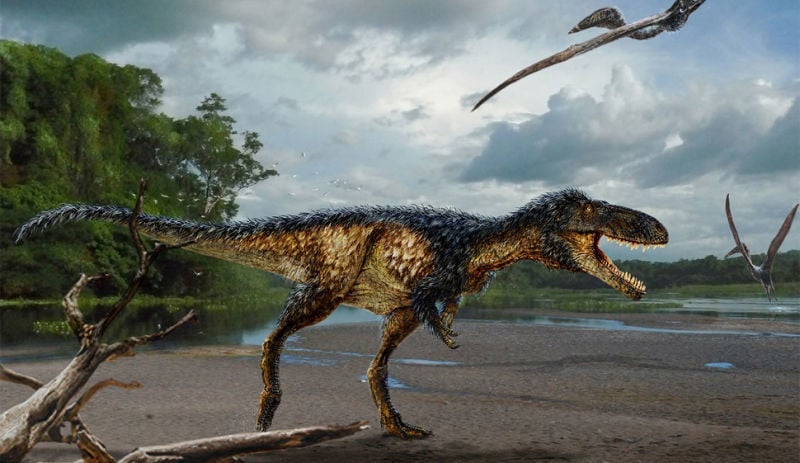 Yesterday, researchers unveiled their discovery of Timurlengia euotica, the newest member of the tyrannosaur family, most known of course for the T. rex. This new species is not only fascinating in its own right — it also provides an elusive missing link in the history of its larger, more famous cousin. Here’s everything we know about Timurlengia euotica so far:

How big was it?

On average, an adult Timurlengia euotica would reach between 10 and 13 feet in length and weigh approximately 600 pounds — all in all, a little larger than the biggest tigers alive today. However, Timurlengia is dwarfed by the T. rex, which, at 42 feet in length and seven tons in weight, was the largest carnivore to ever live on land.

How scary was it?

While Timurlengia didn’t boast T. rex’s fearsome size, it did boast T. rex’s underappreciated brain and senses (namely sight, smell, and hearing), all of which were quite sophisticated relative to other dinosaurs.

Furthermore, unlike the clunky T. rex, Timurlengia was a “nimble, long-legged pursuit hunter and probably a better runner than T. rex,” according to paleontologist Hans-Dieter Sues of the Smithsonian Institution’s National Museum of Natural History. And according to the Smithsonian, Timurlengia sported “slender, blade-like teeth suitable for slicing through meat.”

In the words of paleontologist Stephen Brusatte, the leader of the team that analyzed Timurlengia’s remains, “Timurlengia would be a frightening creature, in the same way that a lion is pretty frightening to us. But if you were somehow transported into an alternate dimension and had a choice between facing down a Timurlengia or a T. rex, you would go with Timurlengia anytime.”

Where did that name come from?

Timurlengia euotica comes from Timur, also known as Tamerlane, a 14th century central Asian conqueror who sought to restore the Mongol Empire of Genghis Khan. Aside from both the dinosaur and the conqueror being rather intimidating, Timurlengia was so named because of where its remains were discovered…

But hundreds of millions of years ago, this desert was home to many dinosaurs and other prehistoric creatures, and has since proven to be a fruitful hunting ground for paleontologists.

When did it live?

About 90 million years ago, in the latter half of the Cretaceous Period, and near the end of the tyrannosaur line (which started about 170 million years ago). This timing is the chief reason that the discovery of Timurlengia is so momentous…

Why is this discovery such an especially big deal?

The first tyrannosaurs were shockingly small (about the size of a human) and remained that way for a long time, only to suddenly evolve to the enormous size of T. rex at the very end of the family line (and the time of the dinosaurs as a whole). Until the discovery of Timurlengia, there had been a gap in the fossil record for the period between about 100 million and 80 million years ago.

Timurlengia helps fill in the gap and reveal how tyrannosaurs got to the late-period behemoths we all know and love.

What Timurlengia Euotica chiefly reveals, and what will surprise anyone outside of the paleontology community is that, again, the tyrannosaurs were very small for a long time, that they were exceptionally smart and possessed keen senses (the opposite of what we learned in Jurassic Park), and that it was these smarts and senses that eventually allowed tyrannosaurs to rise to the top of the food chain and grow to enormous sizes.

Or in the succinct words of Brusatte, “Tyrannosaurs got smart before they got big.”

Next, check out terrifying prehistoric creatures that weren’t dinosaurs, the craziest dinosaur facts you will ever read, and the six most bizarre dinosaurs that ever existed.