Meet Tina Bell, The Black ‘Godmother Of Grunge’ Who Created The Seattle Sound

Half a decade before Nirvana released their first album, Tina Bell and her band Bam Bam pioneered the combination of punk and heavy rock that would come to define grunge music. 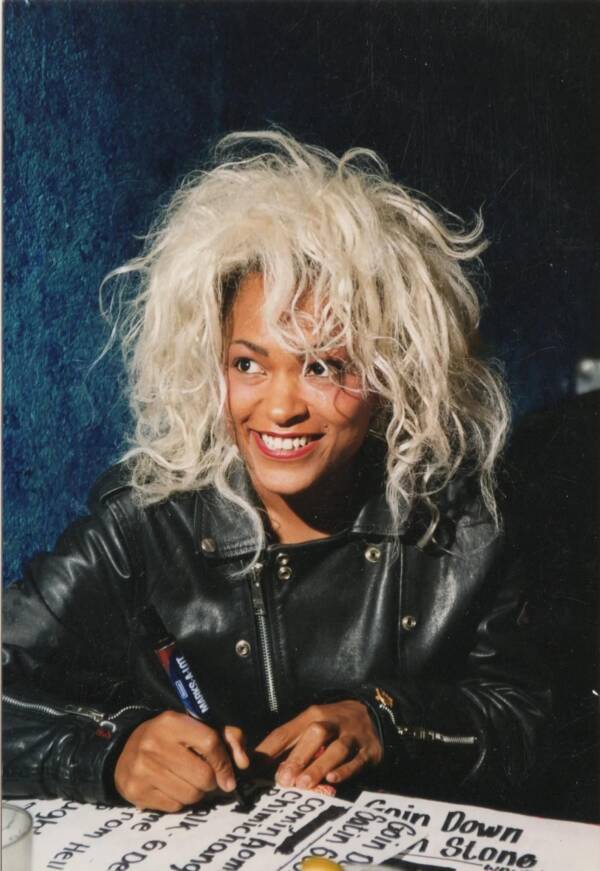 Cynthia Lavik/Buttocks ProductionsAlthough Tina Bell performed for packed shows in Seattle for nearly a decade, she never received widespread success and retired from music in 1990.

Before grunge even had a name or a set of superstars, a 26-year-old Black woman named Tina Bell was giving it a powerful voice. In 1983, Bell and her husband, Tommy Martin, formed a band called Bam Bam that pioneered the new “Seattle sound” — years before anyone else.

Bam Bam distinctly mixed rock genres that would come to define grunge music. They were the first to record at the studio that later nurtured bands like Nirvana and Pearl Jam. And when Kurt Cobain was bouncing between punk bands and Eddie Vedder was drifting between San Diego and Chicago, Bell was singing to sold-out clubs in the center of the Seattle scene.

But her story has remained largely untold in the official histories of the genre. And though the men of grunge received widespread acclaim, Bell spent the remainder of her days in obscurity away from music altogether before dying at the age of 55.

Indeed, but for the efforts of her Oscar-winning son and other modern music historians, Bell would remain little more than a forgotten figure, lost to the annals of rock history. And today, she is reclaiming her crown as Seattle’s forgotten “godmother of grunge.”

Tina Bell And The Formation Of Bam Bam

The oldest of 10 siblings, Tina Marie Bell was born in Seattle, Washington in 1957. She first began honing her vocal chops at Seattle’s Mount Zion Baptist Church, where she was a member of the choir. By high school, Bell was performing on stage with the drama department and on the football field as a cheerleader.

After attending college for drama at Washington State University, she returned to Seattle and joined the Langston Hughes Performing Arts Institute, which would soon lead to one of the most consequential connections in her life. 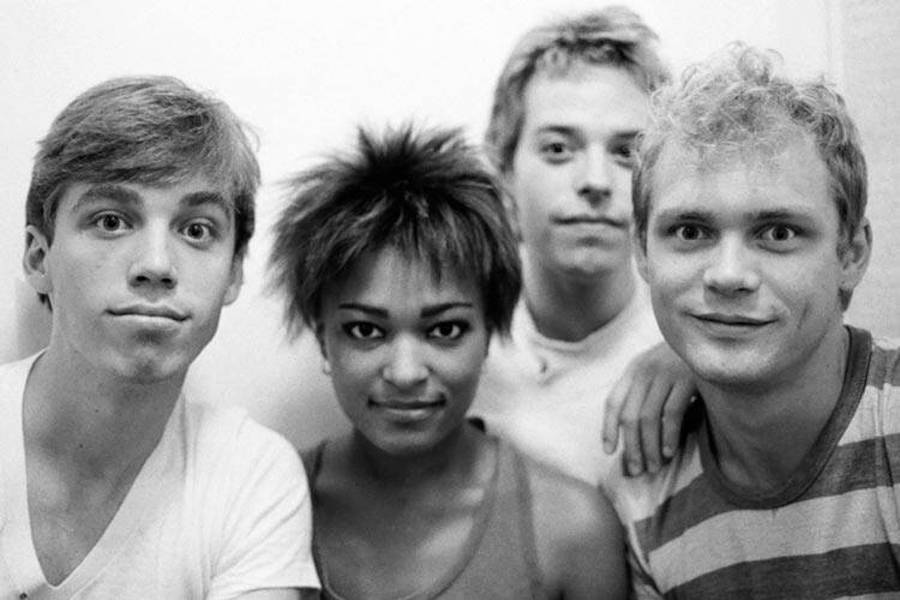 In the late 1970s, Bell needed help perfecting her French for a rendition of “C’est Bon Si” with the institute, so she called a French tutor whose ad she found in the paper. That tutor was Tommy Martin, a local musician. They fell in love instantly, quickly married, and had a son — the Oscar-winning documentarian T.J. Martin — in 1979.

And that was just the beginning of the pair’s collaborations. Their next creation would change the course of musical history.

In 1983, Tina Bell and Tommy Martin founded Bam Bam — an acronym of their names, Bell and Martin. With Bell on the vocals and Martin on the guitar, Bam Bam completed its lineup with bassist Scott Ledgerwood and drummer Matt Cameron, who would go on to find fame in bands like Soundgarden and Pearl Jam.

To say they were incendiary was an understatement.

“She was fucking badass. That’s all there is to it,” said musician Om Johari. Johari grew up going to Bam Bam shows as a teenager in Seattle and later co-founded several rock bands herself.

“She was amazing as a performer. I’ve only seen one white male lead singer command the stage in a similar way that Tina Bell did.”

Mere months after Bam Bam’s founding, the band became a staple of the city’s club scene with their unique pairing of punk with hard rock and heavy distortion. Tina Bell herself became popular for her wild stage presence and powerful vocals that she could pivot from sultry melodies to screaming outbursts in a second. 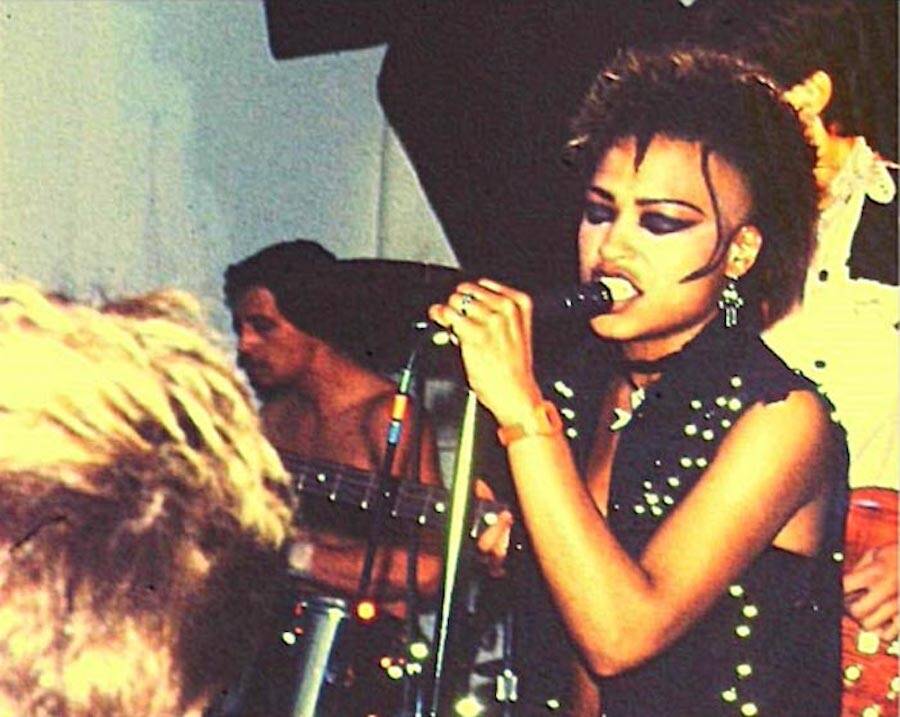 “Her voice was super powerful. She could sing on top of a super loud guitar-based rock band, which is not an easy feat,” drummer Matt Cameron told CBS.

And it didn’t take long for Bam Bam to attract the attention of other Seattle club kids. Future members of bands like Pearl Jam, Soundgarden, and Alice in Chains came to see Tina Bell perform. At one point, Kurt Cobain served as a roadie for the band. Another time, a teenage Duff McKagan, future bassist for Guns N’ Roses, even filled in on stage during a set.

By January 1984, Bam Bam recorded its first tracks. And to do so, they partnered with producer Chris Hanzsek, who had recently founded the Reciprocal Recording Studio on a small wedge of land in an industrial area between Seattle’s Ballard and Fremont neighborhoods.

With Hanzsek, Bam Bam laid down their first singles and only EP in 1984, Villains (also wear white), nearly a full year before the band Green River, the band most often credited with being the first to pioneer the new “Seattle sound,” recorded their first songs in the same studio.

Another four years would pass before Nirvana would record their debut album with Reciprocal. And by then, the post-punk sound that Tina Bell and Bam Bam created before anyone else would have a name: grunge.

Why Tina Bell Was Written Out Of Grunge History

Despite Bam Bam’s popularity, Tina Bell was also subjected to racism both explicit and implicit. People didn’t know what to do with the 5-foot-2-inch Black lead singer of a punk band. Tommy Martin, her husband, even told The Stranger that the press compared her to Tina Turner, “as if that made any sense.” 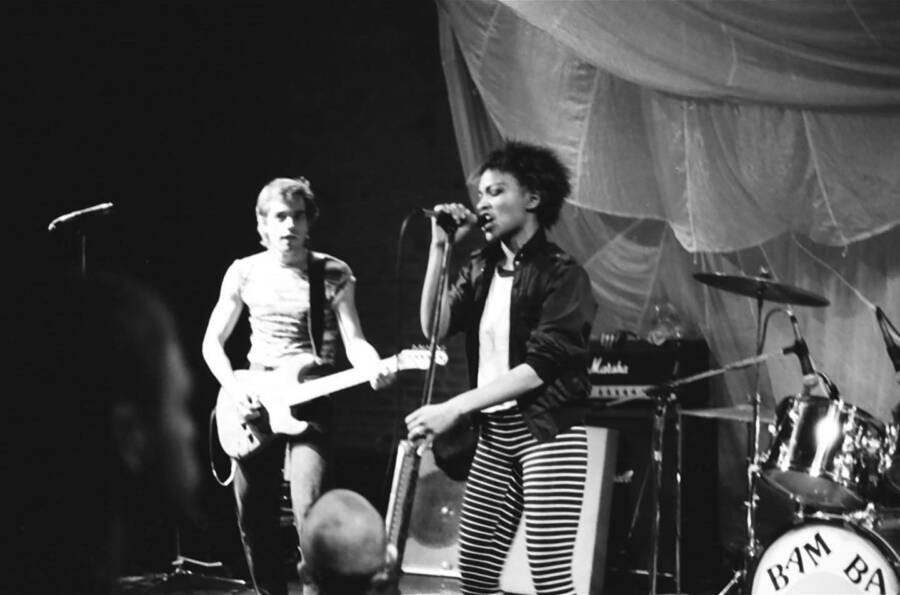 David Ledgerwood/Buttocks ProductionsTina Bell and Tommy Martin perform with Bam Bam at The Metropolis in in Seattle in 1984.

And what recognition Tina Bell did receive during Bam Bam’s rise, she had to fight for — sometimes literally. During one show at The Metropolis, a punk club in Seattle’s Pioneer Square neighborhood, neo-Nazi skinheads came to taunt her.

“For some reason a couple of skinheads are up front, calling her [the N-word]. And all of the sudden, Bell grabs a microphone stand and she starts twirling it around her head like a lasso,” Scott Ledgerwood told the writer Stephanie Siek for Zora.

“She swung that fuckin’ thing around her head and about the fourth time, she smashed that son of a bitch. She nailed that fucker right in the temple of his head. Split like a melon. And the other guy next to him caught it too, they go down, and we’re like, ‘What the fuck?'”

After the band left the stage to regroup, Ledgerwood told Siek, Tina Bell came back and “put out the most blistering set of our fucking career.”

Still, she received pushback in less overt ways as well, Ledgerwood told Samantha Hollins in an interview for The Culture Rock Griot. “People back then expected a Black girl to be Hip-Hop, a Soul diva, or Pop singer,” he said. “Fronting a Hard Rock band was inconceivable to many in the general public it seemed, despite how brilliant she was.”

And Christina King, a longtime friend of Tina Bell’s who watched the band’s rise and fall from local stardom, told KEXP that she remembers “one person saying to me that they didn’t get ‘the whole Black girl singer thing,’ it just didn’t fit whatever they were into. They were too ahead of their time.” 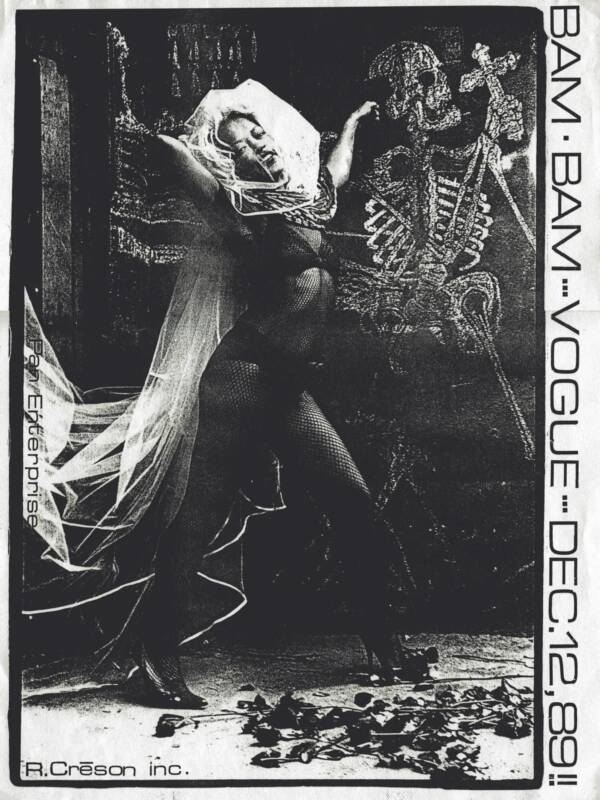 Buttocks ProductionsTina Bell in a poster for a Bam Bam show at Seattle’s Vogue nightclub in 1989, a year before she left the band.

Despite receiving local notoriety and a few independent record label offers, Bam Bam wasn’t able to get the traction it needed for mainstream success. After an unsuccessful stint in Europe during the late 1980s, Tina Bell returned to the United States.

Then, in 1990, she quit the band, just as the grunge sound that she’d almost single-handedly created was starting to bubble up from the underground. The other members of Bam Bam continued as an instrumental trio for a few years before eventually petering out by the end of the decade.

In 1996, Bell divorced Martin. Eventually, she left Seattle and moved to Las Vegas, having struggled with alcoholism and depression for most of her adult life. Sometimes, she volunteered at a local church, other times, she retracted from the world altogether.

And while some remembered her as the grunge influence that she was, by 2011, when a book on the history of grunge came out, she was written out of the genre’s development completely. Writing for the digital rock zine Please Kill Me, Jen Larson notes that the book’s subjects recalled Bam Bam only as the three-piece instrumental group it was in the 1990s — without a vocalist.

Then, on October 10, 2012, Bell died alone in her Las Vegas apartment at the age of 55 of cirrhosis of the liver. According to her son, she’d been dead for weeks before anyone found her. And by the time he was even notified of her passing, officials had already thrown out all of her personal archives.

How The ‘Queen Of Grunge’ Finally Got Her Due

The same year that Bell died, her son T.J. Martin won an Academy Award for Best Documentary Feature for his football film, Undefeated. And that, perhaps, would have been her legacy had CBS not come calling in 2021.

Lee Cowan, the CBS Mornings reporter, reached out to Om Johari to do a story on Bell. This prompted Johari to put together a tribute concert featuring a wide assortment of Seattle’s finest musicians — including former Bam Bam drummer Matt Cameron. 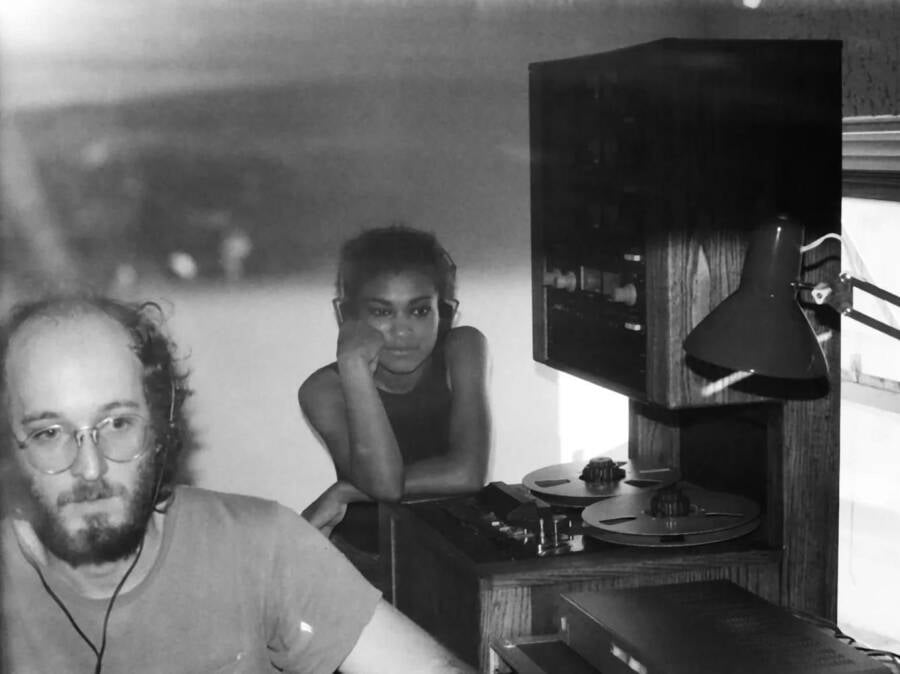 Dave Ledgerwood/Buttocks ProductionsTina Bell and producer Chris Hanzsek during the recording of Bam Bam’s EP “Villains (also wear white)” at Reciprocal Recording Studio in Seattle in 1984. Bam Bam was the first band to record tracks the studio, which was widely recognized as the birthplace of grunge.

When the news segment — complete with snippets of the tribute concert — aired nationally, Tina Bell finally began getting her long-overdue recognition. For Bell’s son, the response to his mother’s legacy was bittersweet.

“My parents were very different people. My mom internalized her struggles and her pains. My dad projected his struggles and his pains. She didn’t spend much time talking about the difficulties of the perception of who she was when she was with the band,” T.J. told The Portland Mercury.

“My dad spent the remainder of his life talking about how they didn’t get the right recognition that they deserved.”

Indeed, during Bam Bam’s heyday, bands that got their start opening for Tina Bell — like the Melvins and Alice in Chains — would eventually become more famous in the Seattle grunge scene. And for many who remember her, she is long overdue for the second look that she and Bam Bam are finally receiving.

“She was an innovator with no peers, you know. A critical component to the creation of the music format called grunge that later forgot she even bloody existed,” Scott Ledgerwood told KEXP.

“You know, it’s not the first time a person of color helps develop a new idea and doesn’t get credit for it, but it’s a pretty good example of it… [she was] the queen of grungetown.”

Now that you’ve read all about Tina Bell, read all about the tragic final days of Soundgarden frontman Chris Cornell — and the truth about his death. Then, check out these photos from the 1990s, when grunge was king.