The Chilling Story Of T.J. Lane, The Remorseless Killer Behind The Chardon School Shooting

On the morning of February 27, 2012, T.J. Lane opened fire inside the cafeteria at Chardon High School, killing three students and wounding three others — while wearing a sweatshirt emblazoned with the word "killer." 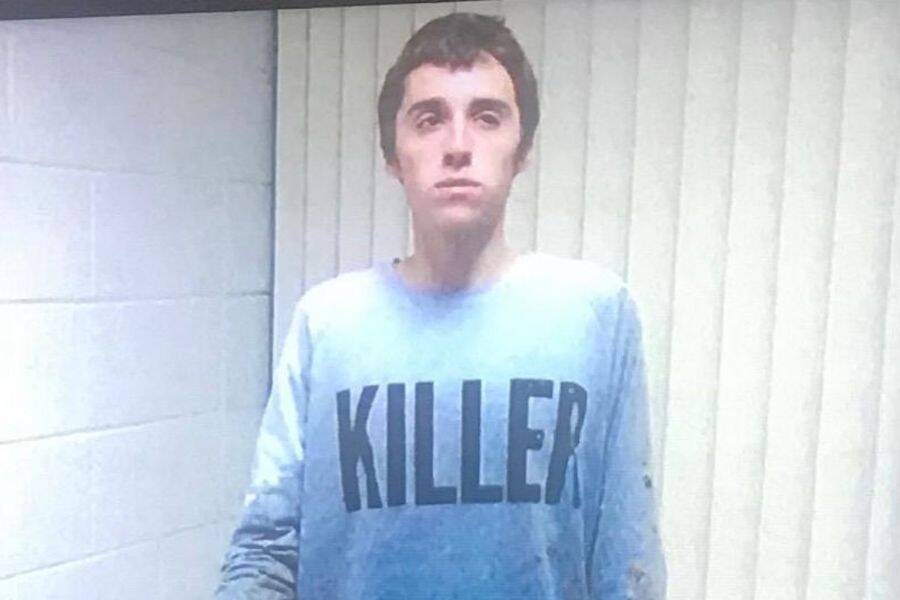 Police PhotoT.J. Lane wore a sweatshirt with the word “Killer” written on it when he murdered three students and wounded another three.

When T.J. Lane opened fire at the Chardon High School in the town of Chardon, Ohio, in 2012, his goal was to kill someone he thought was a romantic rival. T.J., who was by all accounts a “troubled kid,” ended up killing three students and wounding three others.

There was no question who committed the unspeakable act, and Lane’s trial was brief. But even his conviction didn’t mark the end of the drama.

This is the strange, sad story of Ohio school shooter T.J. Lane.

What Drove T.J. Lane To Kill His Classmates?

Despite growing up in an “all-American” town in the Midwest, Thomas Michael Lane III wasn’t raised in a happy home. His father, Thomas Lane Jr., was in and out of prison for most of his son’s life, primarily because of acts of violence against women — including Lane’s mother, who was also arrested at various times for domestic violence.

As a result, his parents ultimately lost custody of their son, and T.J. Lane was sent to live with his grandparents. 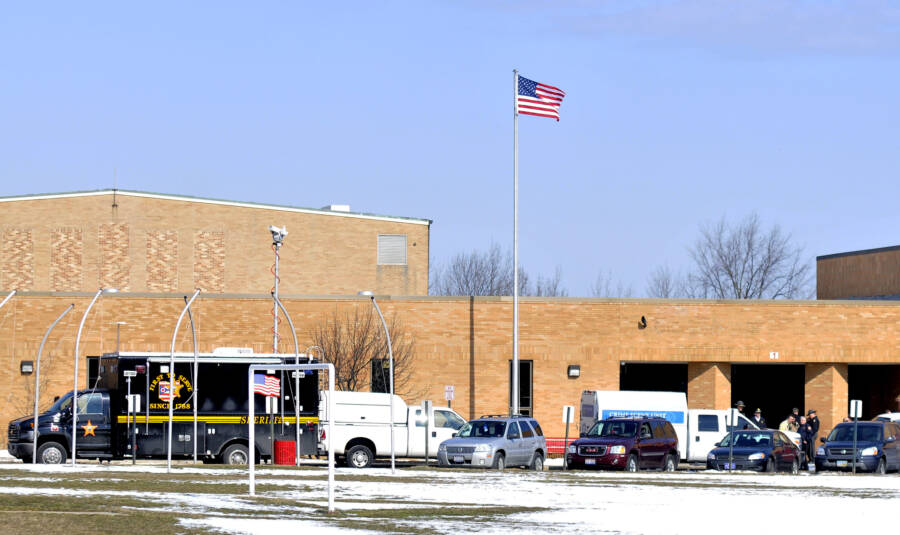 According to CNN, students who went to Chardon High School described T.J. Lane as “reserved.” He didn’t discuss details about his tumultuous family life. Nor did he have many friends, and he didn’t belong to any clubs or cliques.

Others, however, remembered a much kinder person. “He seemed like a very normal, just teenage boy,” Haley Kovacik, who went to school with Lane, told CNN. “He did have a sad look in his eyes a lot of the time, but he talked normally, he never said anything strange.”

Teresa Hunt, whose niece rode the bus to school with Lane, also told the outlet that he was a very “kind” child who would engage her niece when no one else would.

Despite his surface kindness, however, T.J. Lane was deemed a “reluctant learner,” leading to his transfer to the Lake Academy Alternative School in the neighboring town of Willoughby, Ohio, at the end of his first year.

According to International Business Times, two months before the shooting, he published a distrubing piece of writing on Facebook.

“I am Death. And you have always been the sod,” it read in part. “Now! Feel death, not just mocking you. Not just stalking you but inside of you. Wriggle and writhe. Feel smaller beneath my might. Seizure in the Pestilence that is my scythe. Die, all of you.”

And while it may have raised a few eyebrows, no one seems to have predicted the tragedy that would happen next.

The nightmare for Chardon High School students began at approximately 7:30 a.m. on Feb. 27, 2012. At that time, T.J. Lane stormed into the cafeteria — where many students gathered before their morning classes — and opened fire.

Lane ultimately shot five male students and one female student before running out of the cafeteria, only to be tackled by a teacher named Joseph Rizzi and a coach named Frank Hall. 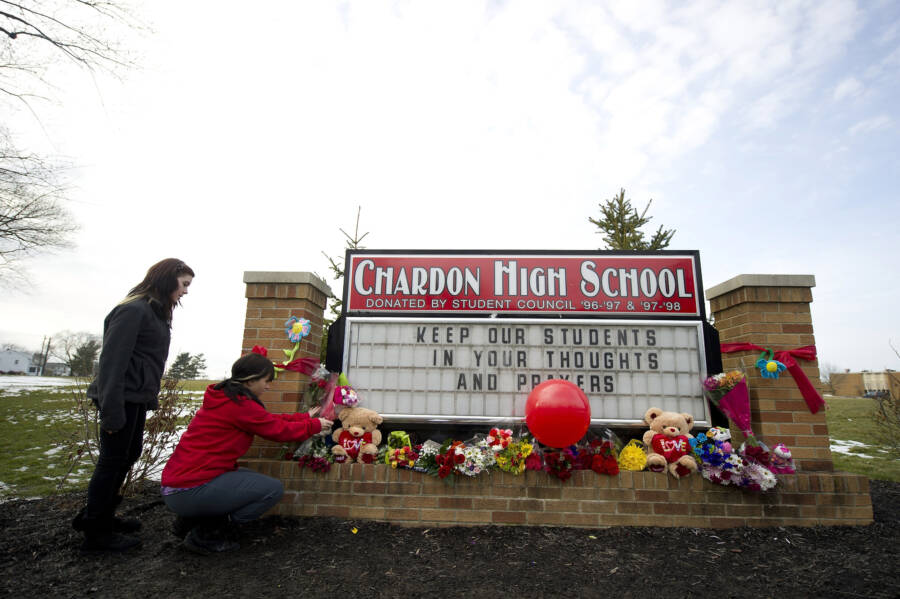 Jeff Swensen/Getty ImagesTwo Chardon High School students place flowers on the sign outside the building the day after T.J. Lane killed three of their classmates.

But by the time his rampage was over, three students — Russell King Jr., Demetrius Hewlin, and Danny Parmertor — were dead, and two were severely injured, according to The Washington Post. One of the students who survived the attack identified the shooter as Lane.

T.J. Lane’s trial went as expected: he was quickly tried and convicted of the crime. But it was his behavior in the courtroom that made headlines. At his sentencing hearing, Lane wore a white shirt with the word “KILLER” scrawled across it, addressed the victims with profane imagery, and even stuck up his middle finger while saying, “This hand that pulled the trigger that killed your sons now masturbates to the memory. Fuck all of you.”

While some suspected T.J. Lane was aiming for a romantic rival — a commonly-held belief to this day — he never made his motive clear in court. Nevertheless, he was given three life sentences — one for each student whose life he took.

How T.J. Lane Escaped From Prison And Was Recaptured

After T.J. Lane was convicted, he was remanded to the Allen Correctional Institution in Lima, Ohio, where he proved to be just as much of a “troubled kid” as he was in high school. Reports from the institution reveal that he’d been disciplined at least seven times for such behavior as urinating on walls, self-mutilation, and refusing to perform assigned prison tasks, according to Cleveland.com. 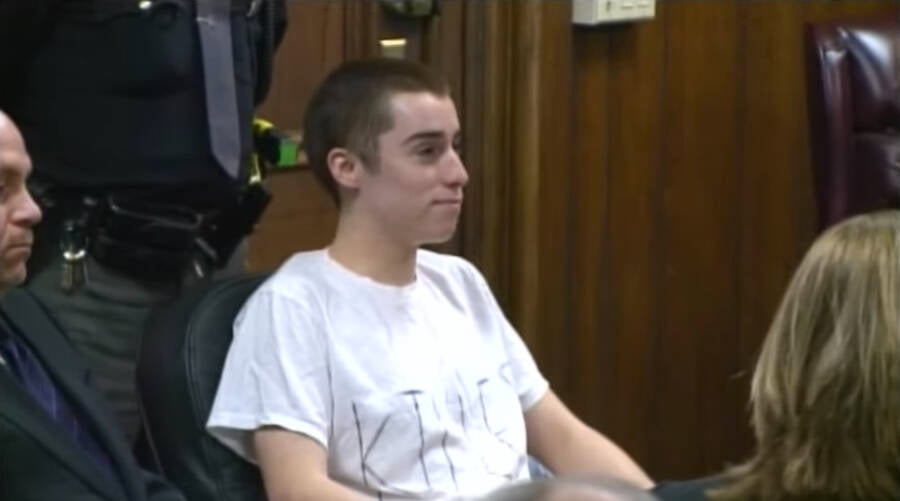 YouTubeAt his trial, T.J. Lane unbuttoned a blue shirt to reveal a T-shirt that he’d written the word “Killer” on, mimicking the sweatshirt he wore on the day of his school shooting.

Then, on Sept. 11, 2014, T.J. Lane escaped from the prison along with two other inmates. In response to reports of his escape, Chardon High School was immediately closed out of concern for students’ safety. Less than 24 hours later, Lane was apprehended without much fanfare, according to CNN.

Today, Lane is serving the remainder of his multiple life sentences at the Warren Correctional Institution in Youngstown, Ohio, a “supermax” prison, according to the Ohio Department of Rehabilitation and Correction. His schedule is much more restrictive, and he has far fewer privileges than before entering the supermax.

As for the Chardon High School shooting survivors, they continue to campaign for stricter gun laws and more severe penalties for school shooters. Frank Hall, the coach who tackled T.J. Lane on that fateful day, founded the Coach Hall Foundation, which allows the survivors to travel to high schools across the country to share their stories in the hope of preventing a similar tragedy in the future.

“It’s never comfortable. Each time it takes a little bit out of you,” Hall told WOIO in 2022.

“I know it’s important that we have to do this. But it’s not easy. But for Danny, Demetrius and Russell, we do it.”

After reading about school shooter T.J. Lane, learn the sad story of Cassie Jo Stoddart, the teenage girl who was killed by her classmates for fun. Then, read about Lester Eubanks, the notorious child murderer who escaped from prison in 1973 and hasn’t been seen since.