The Inspiring True Story Of Todd Beamer, The Hero Of Flight 93

A passenger on United Airlines Flight 93, Todd Beamer helped lead a revolt against the terrorists who hijacked his plane on September 11, 2001 — and may have saved the U.S. Capitol.

For most of his life, Todd Beamer dreamt of becoming a professional baseball player. A car accident dashed those hopes, but his athletic prowess nonetheless came in handy. At age 32, he helped lead a passenger revolt on United Airlines Flight 93 after it was hijacked on September 11, 2001. Though Beamer tragically died that day, he likely saved countless lives.

On that morning, Beamer was supposed to fly to California for a business meeting. He had then planned to fly back to New Jersey later that same day so that he could be with his pregnant wife and two young sons. But everything changed when al-Qaeda terrorists took over his plane.

Like the other victims on board, Beamer soon realized that he might not survive the attack. Tragically, he didn’t have much time before the plane would ultimately crash. But in the final moments of his life, he chose to fight back against the hijackers alongside other passengers and crew members. It’s now believed that this decision helped save the U.S. Capitol.

This is the story of Todd Beamer — whose last words were “Let’s roll.”

The Life Of Todd Beamer 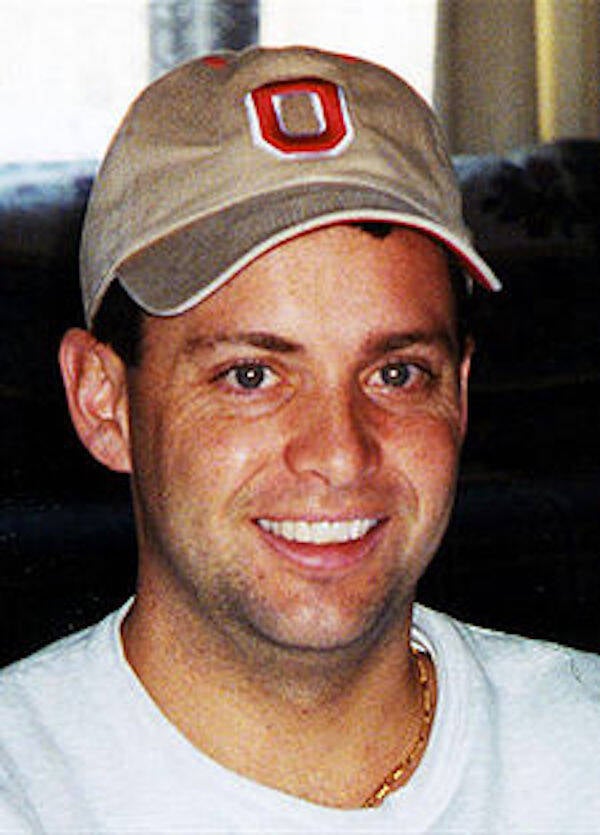 Wikimedia CommonsTodd Beamer was just 32 years old when he died.

Born on November 24, 1968, in Flint, Michigan, Todd Beamer was a middle child. He was raised by his loving parents, David and Peggy Beamer, and grew up alongside his older sister Melissa and his younger sister Michele.

The family moved around quite a bit, relocating to Poughkeepsie, New York when Beamer was a child. Shortly thereafter, Beamer’s father found work at the Amdahl Corporation, moving the family to a suburb of Chicago, Illinois.

There, Beamer attended Wheaton Christian Grammar School and then later Wheaton Academy for high school. According to The Independent, he enjoyed playing many different sports during this time, especially baseball.

Beamer’s family moved yet again during the end of his junior year of high school, this time to Los Gatos, California. He finished up his high school education at Los Gatos High School before enrolling at Fresno State University for college, continuing to play sports all along the way.

But then one night, he and his friends got into a car accident. Though everyone in the group survived, Beamer’s injuries meant that he would likely not be able to play baseball professionally as he’d hoped.

Before long, he decided to move back to the Chicago area and transfer to Wheaton College. There, he met his future wife Lisa Brosious Beamer. According to Lisa Beamer’s book Let’s Roll!, the couple went on their first date on November 2, 1991, and were married about three years later in 1994.

By the time the couple had married, Todd Beamer had earned an MBA from DePaul University. The pair relocated to New Jersey, where Todd found work with Oracle Corporation, selling systems applications and database software. Lisa also found a position at Oracle, selling educational services, though she would soon leave her job to become a stay-at-home mom.

Todd and Lisa Beamer had two sons and moved from Princeton to Cranbury in 2000. The following year, 2001, Oracle rewarded Todd for his work ethic with a five-day trip to Italy with his wife, who by that point was pregnant with the couple’s third child — who would be born after Todd’s death.

The pair flew home from their trip on September 10, 2001. The next morning, Todd Beamer had yet another flight planned to San Francisco — for what he thought would be an ordinary business meeting. But then, tragedy struck.

The Hijacking And Crash Of Flight 93 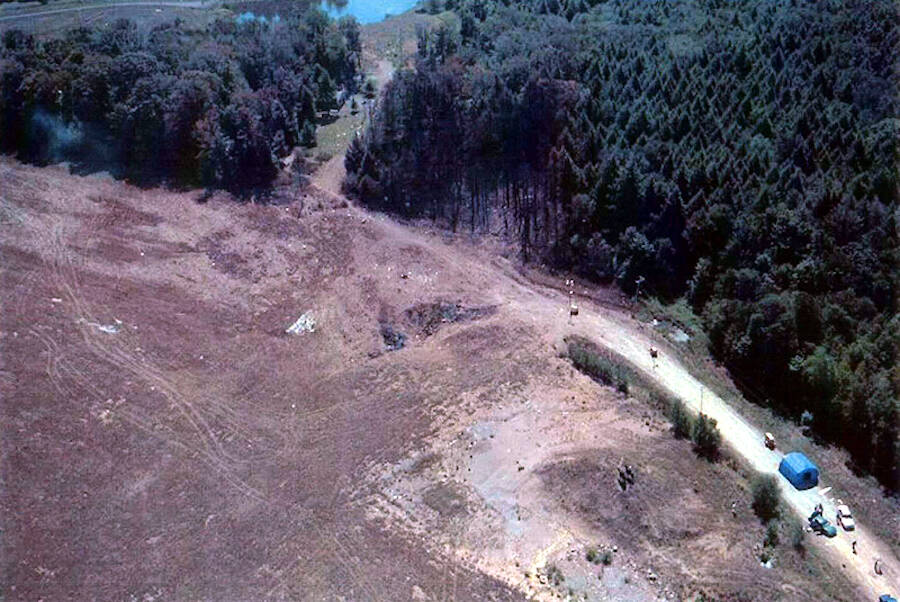 Scheduled to take off from Newark International Airport at 8 a.m., United Airlines Flight 93 was delayed due to heavy air traffic and congestion on the tarmac. It ultimately took off at 8:42 a.m. There were seven crew members and 37 passengers aboard, including Beamer and four hijackers: Ahmed al Nami, Saeed al Ghamdi, Ahmad al Haznawi, and Ziad Jarrah.

At this point, Beamer and the other innocent passengers on Flight 93 were unaware of the hijacked planes that had hit the World Trade Center. They also had no idea that their plane was about to be hijacked at 9:28 a.m.

Then, al Nami, al Ghamdi, al Haznawi, and Jarrah seized control of the plane. Armed with knives and box cutters, they stormed the cockpit, overpowering the captain and first officer. The ensuing struggle — and one of the pilots saying, “Mayday” — was heard by the Cleveland Air Route Traffic Control Center. The flight then suddenly dropped 685 feet in altitude.

As the Cleveland Center tried to contact Flight 93, they heard one hijacker — likely Jarrah — make a chilling announcement at 9:32 a.m. According to The History Channel, he said, “Ladies and gentlemen: Here the captain, please sit down, keep remaining sitting. We have a bomb on board. So, sit.”

Just two minutes later, the flight changed course. It soon became clear to those on the ground that the plane had been hijacked — and that it was no longer headed toward San Francisco. By 9:37 a.m., American Airlines Flight 77 had crashed into the Pentagon in Washington, D.C. And Flight 93 would soon be headed toward the same city — likely to target the U.S. Capitol Building.

Meanwhile, the panicked flight attendants and passengers on Flight 93 began to use the onboard Airfones to call their loved ones. During these calls, they learned about the New York plane crashes and realized that the hijacking of their plane was likely connected to a much larger attack. 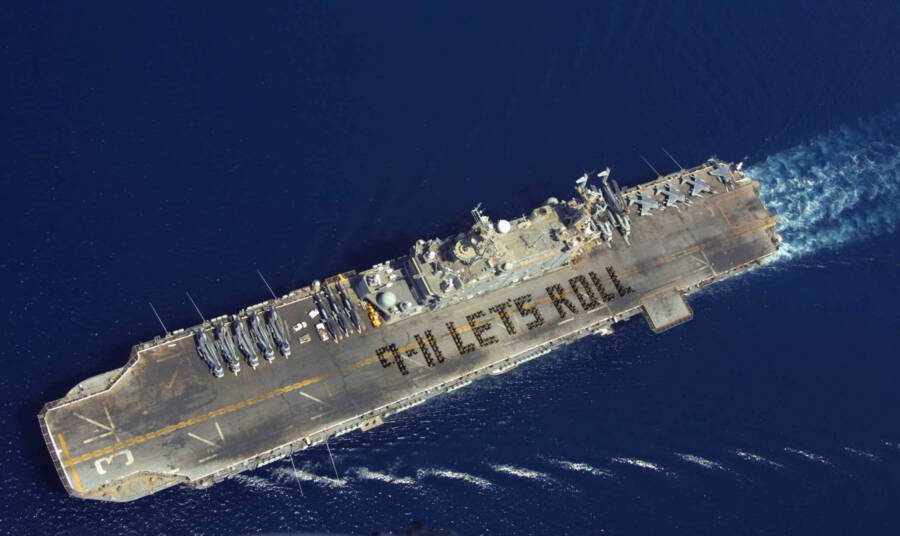 Beamer was one passenger who made calls amidst the chaos. At 9:42 a.m., he tried calling AT&T, but the calls were terminated upon connection. And at 9:43 a.m., he called his wife, but that call was also terminated. Then, he called GTE Airfone operators and was connected to Lisa Jefferson.

Jefferson spoke to Beamer for about 13 minutes total. During the call, Beamer explained the hijacking situation and told Jefferson that he and other passengers — including Mark Bingham, Jeremy Glick, and Tom Burnett — were planning to fight back against the hijackers. Flight attendants like Sandra Bradshaw and CeeCee Lyles also planned to bombard the cockpit with pitchers of boiling water and as many heavy objects as they could grab.

During Beamer’s call with Jefferson, he recited the Lord’s Prayer and Psalm 23 with her — and Jefferson heard some of the other passengers join in to pray as well. Beamer had one last wish to relay to Jefferson: “If I don’t make it, please call my family and let them know how much I love them.”

The last thing Jefferson heard Beamer say was a question that he asked his peers before they headed toward the cockpit: “Are you ready? Okay, let’s roll.”

The passenger revolt began at 9:57 a.m., after which the hijackers began violently maneuvering the plane to stop the counterattack. But the passengers and crew members were undeterred, as captured by their voices saying, “Stop him!” and “Let’s get them!” on the cockpit voice recorder.

By 10:02 a.m., a hijacker said, “Pull it down!” As the 9/11 Commission Report later found, “The hijackers remained at the controls but must have judged that the passengers were only seconds from overcoming them.”

At 10:03 a.m., the plane crashed into a field near Shanksville, Pennsylvania. Everyone on board — including crew members, passengers, and terrorists — was killed. Overall, 19 hijackers had killed 2,977 people that day.

The Legacy Of Todd Beamer 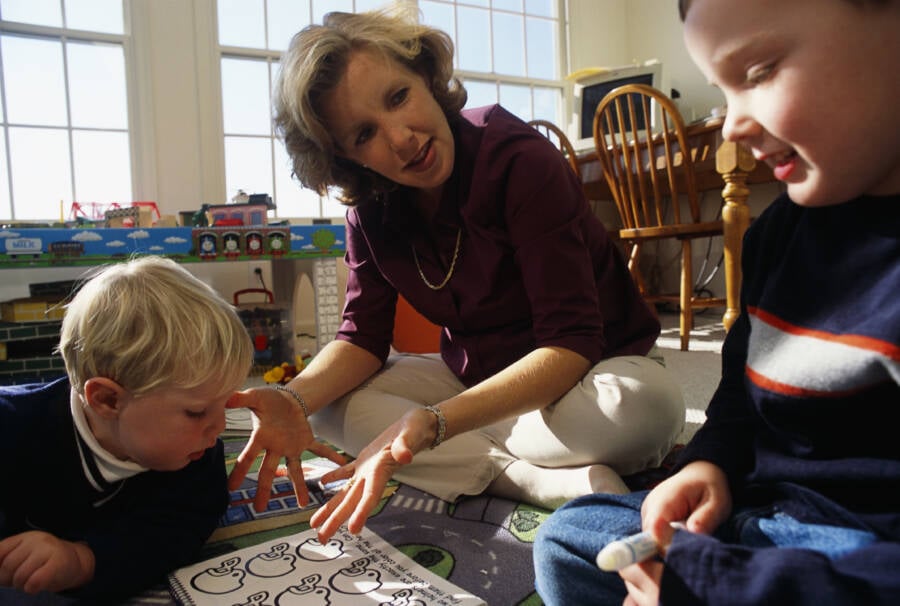 Mark Peterson/Corbis/Getty ImagesLisa Beamer and her sons David and Drew at their home in New Jersey.

United Airlines Flight 93 was approximately 20 minutes away from Washington, D.C. by flying time when it crashed in the field. It was later revealed that Vice President Dick Cheney had ordered the plane shot down had it entered the D.C. airspace. According to CNN, this was in response to the three planes that had already hit the Twin Towers and the Pentagon.

But when Cheney learned that the plane had crashed near Shanksville, he reportedly said, “I think an act of heroism just took place on that plane.”

And as Americans mourned the great loss of thousands of innocent people, some found a glimmer of hope when they heard about the heroics of the passengers and crew members who fought back on Flight 93 — perhaps preventing even more casualties that could have happened that day.

Todd Beamer undoubtedly became one of the most famous national heroes of that flight — especially thanks to his rallying cry of “Let’s roll.”

A post office in New Jersey was dedicated to him. A high school in Washington was named after him. His alma mater Wheaton College christened a building in his honor. His widow Lisa wrote a bestselling book about her life with him — and the title was his two famous last words.

She and her three children, meanwhile, kept him in their hearts with that motivating catchphrase — his final rallying cry — as she expressed in an interview with the Pittsburgh Post-Gazette shortly after his death.

“My boys even say that,” said Lisa Beamer. “When we’re getting ready to go somewhere, we say, ‘C’mon guys, let’s roll.’ My little one says, ‘C’mon, Mom, let’s roll.’ That’s something they picked up from Todd.”

After learning about Todd Beamer, read about Neerja Bhanot, the heroic stewardess who saved lives during the Pan Am Flight 73 hijacking. Then, learn about Henryk Siwiak, the last man murdered on 9/11.