Explore TreeHouse Point, Washington's wondrous treehouse hotel, and discover its surprising ins and outs with these stunning photos and facts. 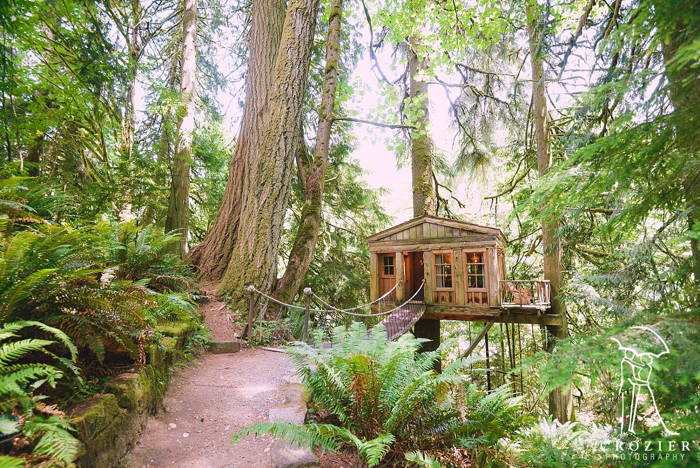 In 2005, Pete Nelson was led by the light of a blue moon to the spot where he would build TreeHouse Point's first treehouse: The Temple of the Blue Moon (above). Source: Facebook 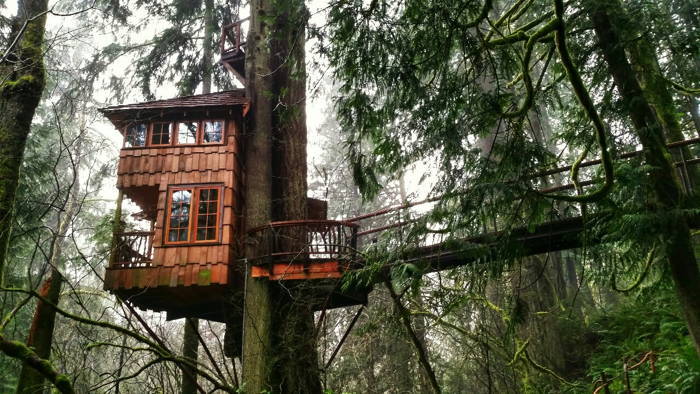 The first rule of treehouse building: don't let the treehouse actually touch the tree. It instead rests entirely upon a manmade support structure so as to not harm the tree. Source: Kick Drumheart 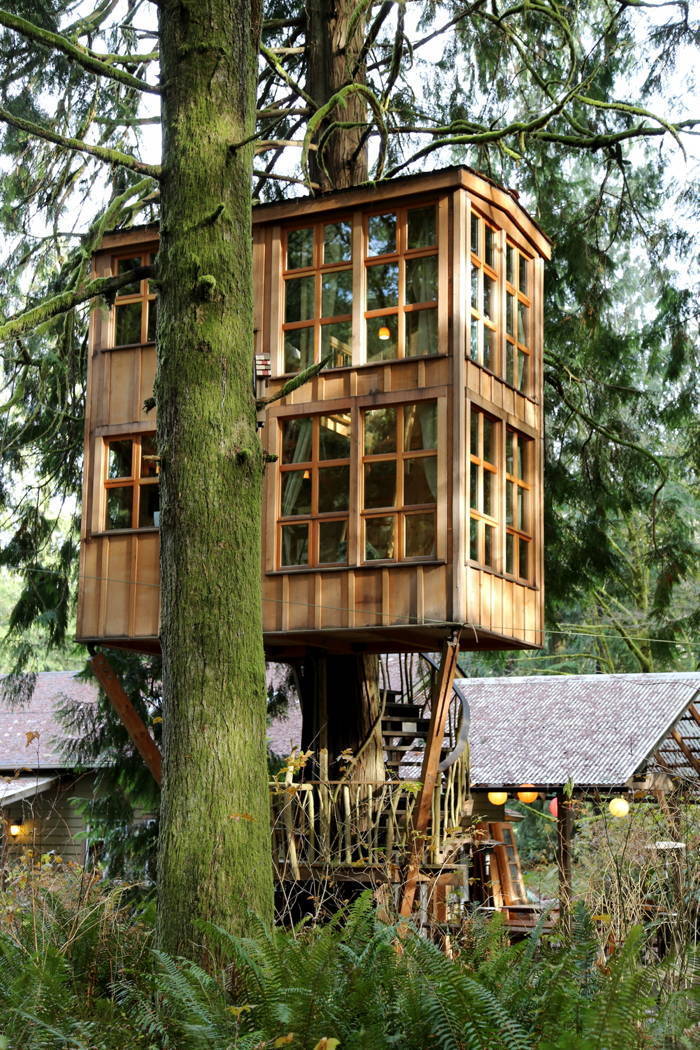 You can have your own Pete Nelson treehouse in your backyard--if you've got at least $150,000 to spare. Source: Lisette Wolter McKinley 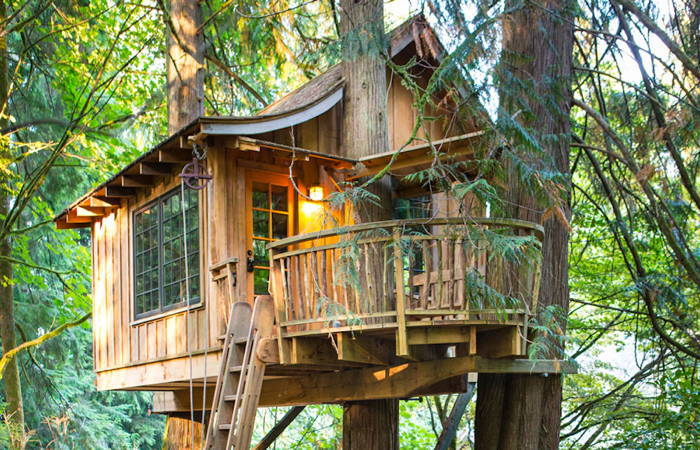 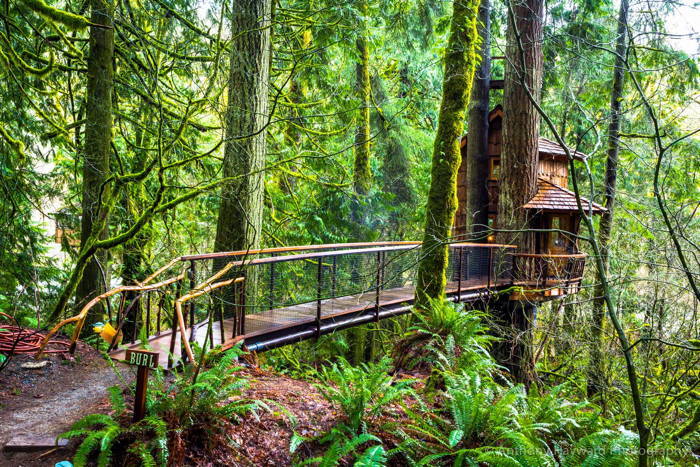 Children under 13 are not allowed at TreeHouse Point. The owners "try to maintain a mature atmosphere, conducive to a romantic, adult getaway." Source: Facebook 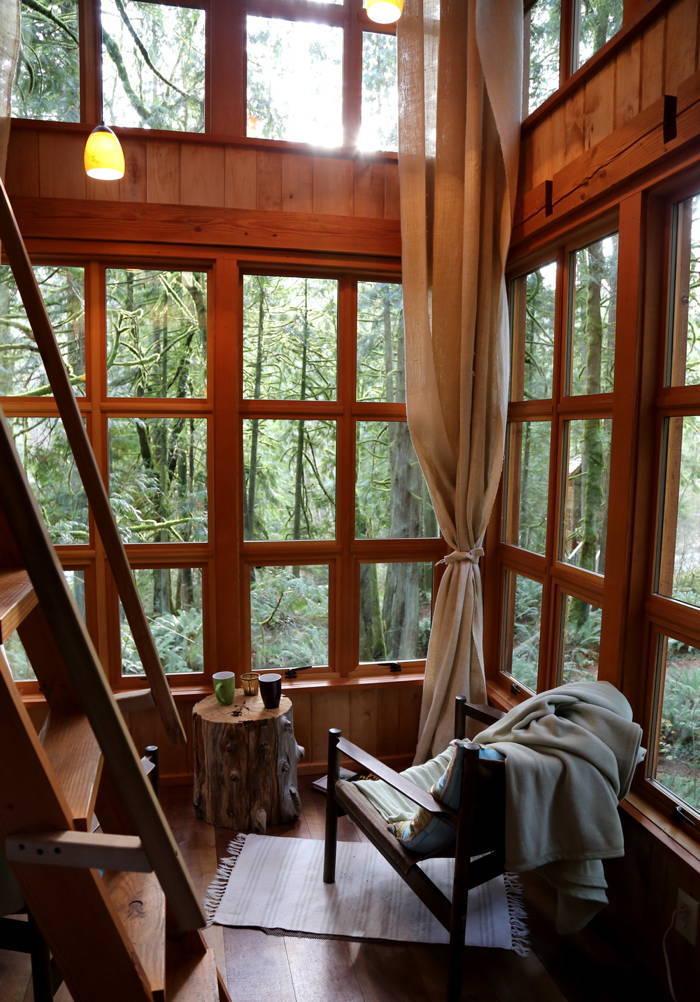 You'll find king and queen-size beds, electricity, even iPod docking stations inside the resort's lodgings--unlike the treehouse you had when you were six. Source: Lisette Wolter McKinley 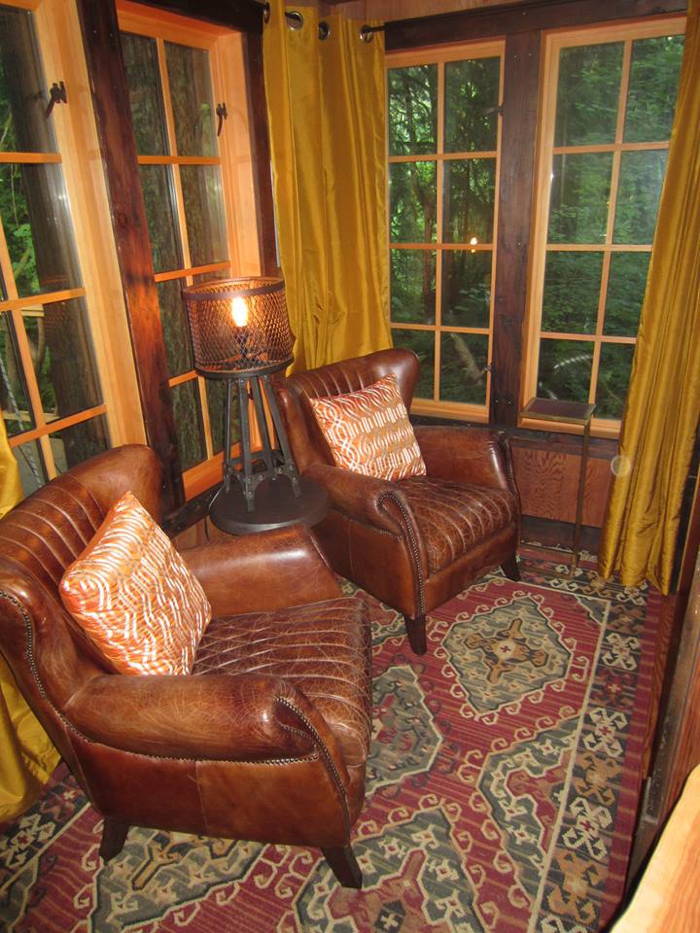 Just because you're in a treehouse doesn't mean you can't live in the height of refinement. Source: Facebook 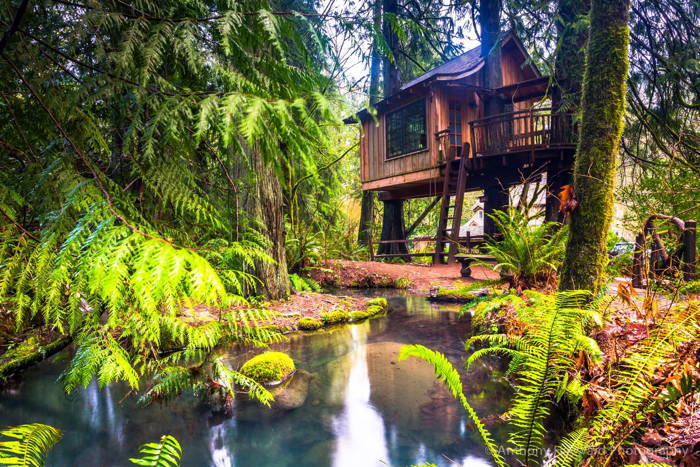 These treehouses are generally not equipped with indoor plumbing. However, some contain a Lovable Loo composting toilet. Source: Facebook 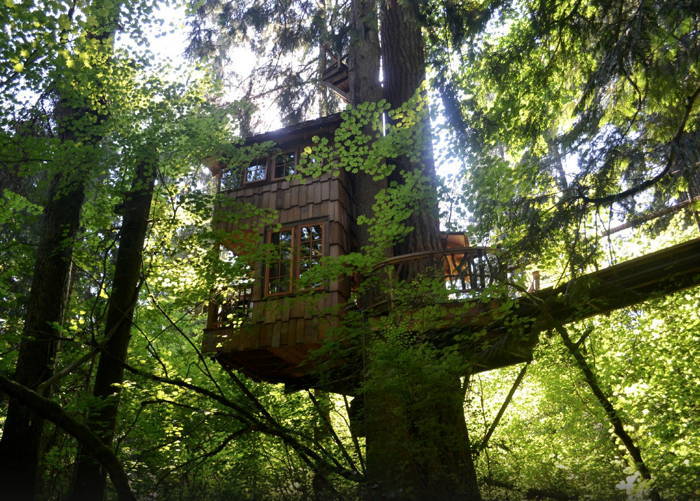 The linchpin of any good treehouse is the bolt that attaches the supports to the tree. Without these bolts, there would be no treehouse. These small pieces of carbon steel can support 8,000-12,000 pounds of force and cost $250 apiece. Source: Trip Advisor 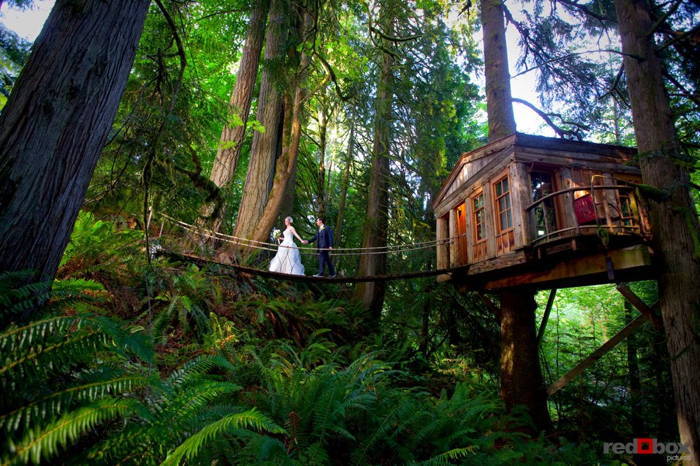 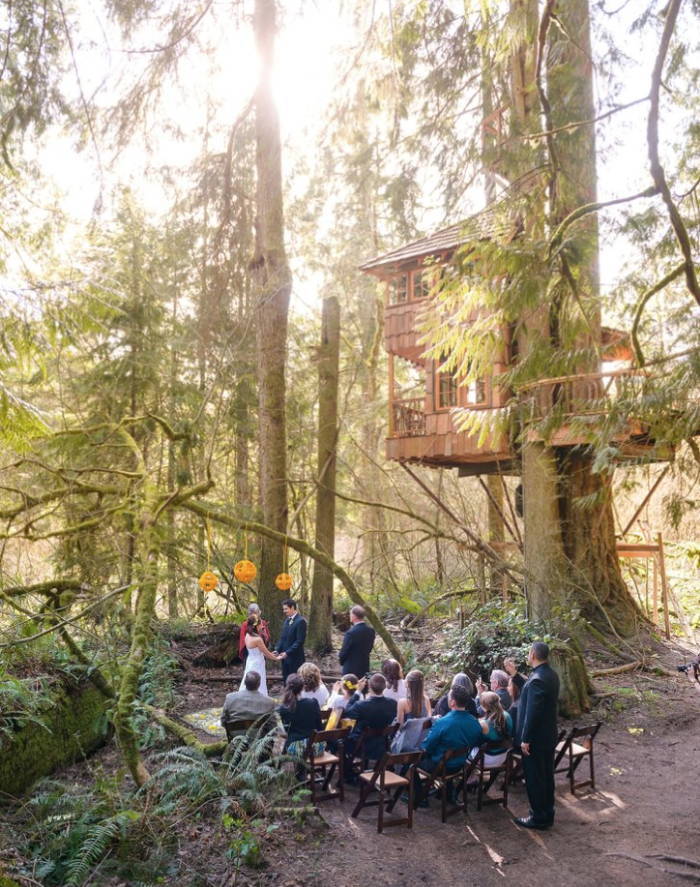 While TreeHouse Point's indoor space for weddings is presumably lovely, holding the ceremony outdoors seems like a no-brainer. Source: The Knot 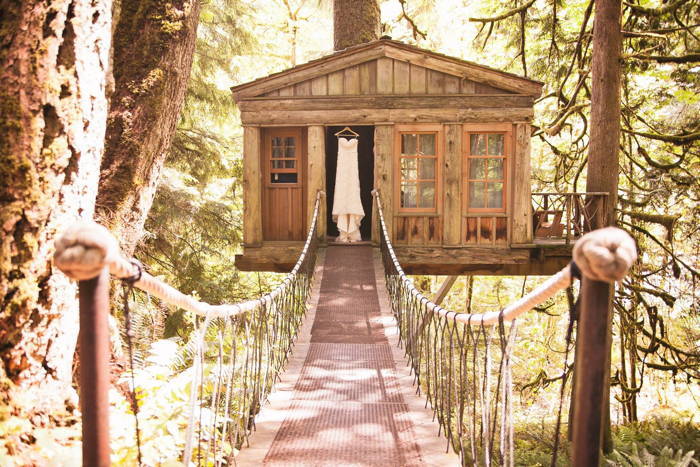 The full wedding package accommodates up to 80 guests, while the Elopement Package allows for two nights of "intimate celebration." Source: Facebook 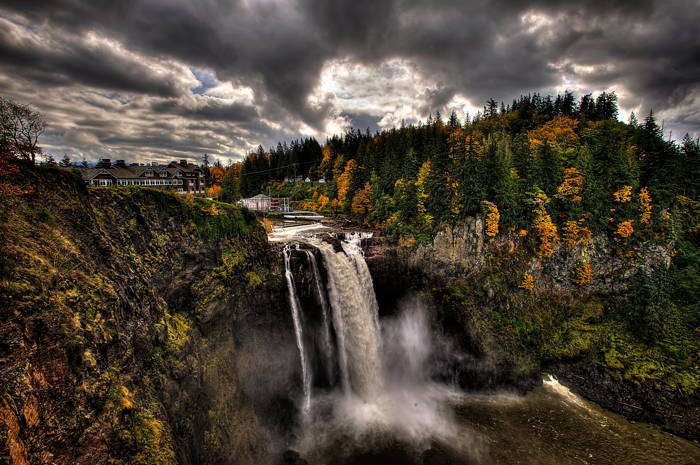 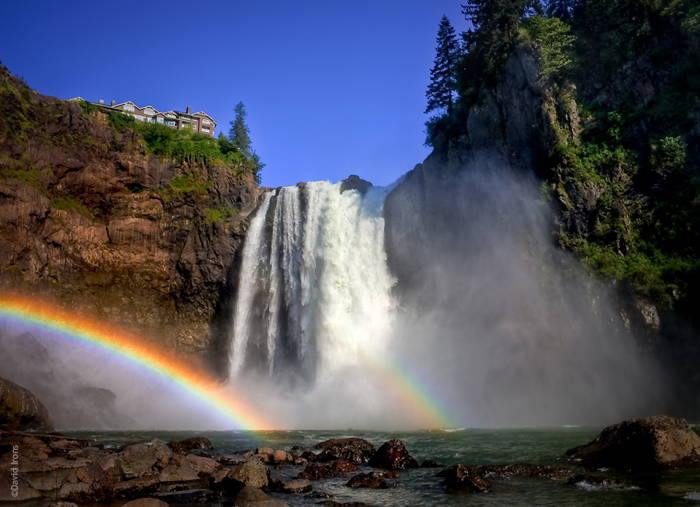 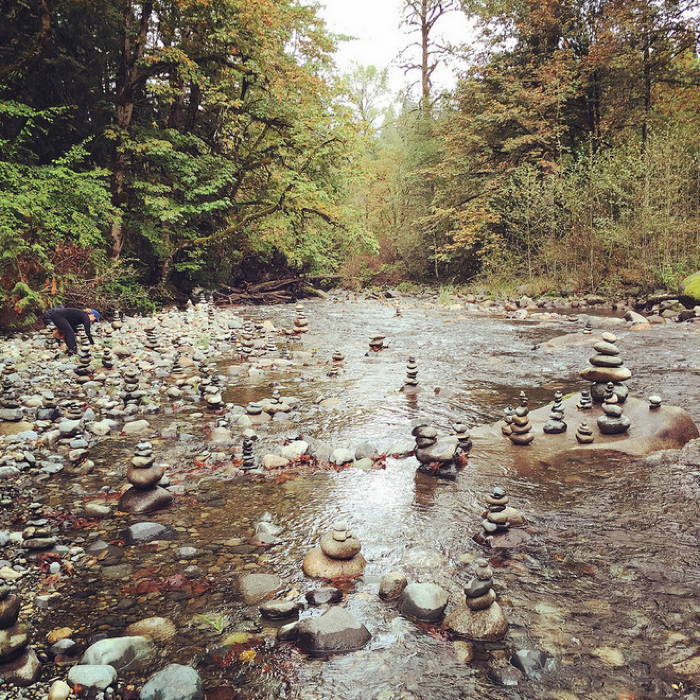 Dozens of cairns (stone towers used to mark a pathway or special site) adorn the banks of the nearby Raging River. Although the river washes them away every winter, TreeHouse Point's staff and guests steadfastly rebuild them come spring. Source: Flickr 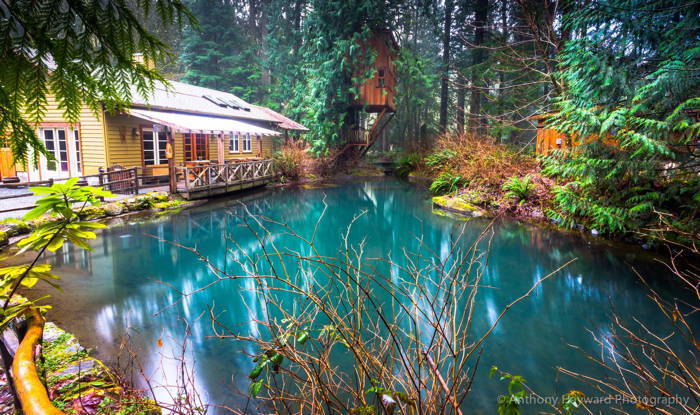 The Pond Room (left) hosts everything from yoga to business meetings. The Bath House (right) provides a few of the things you just won't find in a treehouse. Source: Facebook 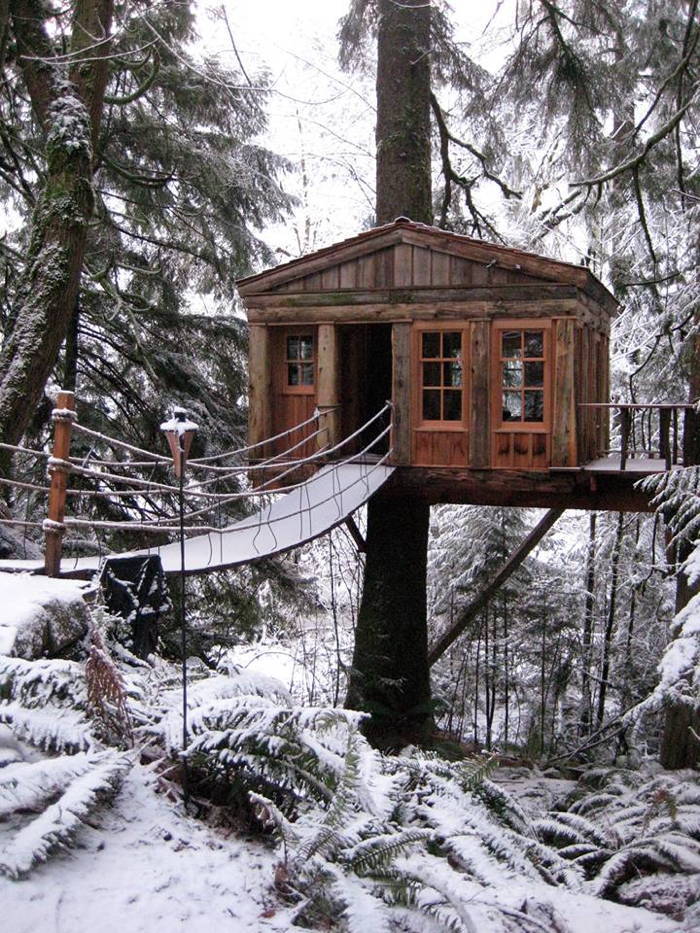 Washington winters aren't all that awful. But in case you were worried, the treehouses are heated. Source: Facebook 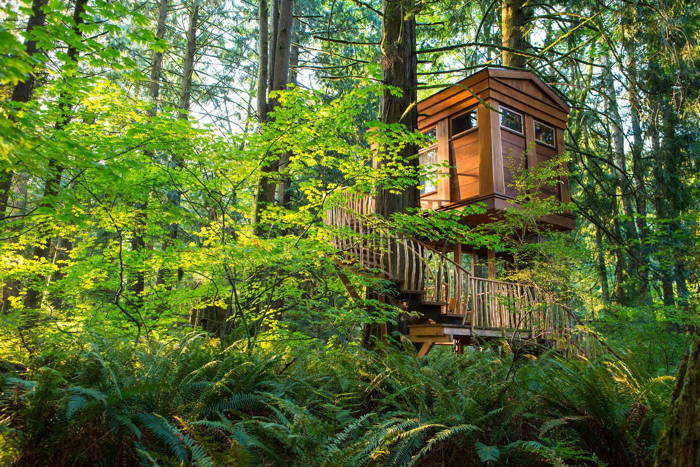 The world's largest treehouse can be found in Tennessee. At 10,000 square feet and 90 feet tall, it contains 80 rooms and took 258,000 nails to build. The minister that owns it built it himself on a mission from God. Source: Facebook 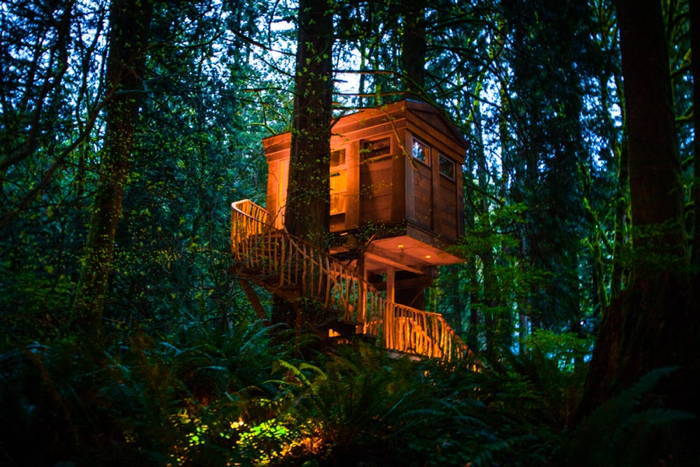 You are "absolutely away from it all" when in a treehouse, Pete Nelson told The New York Times. Nelson first thought he'd be building backyard offices. But in 15 years, he estimates he's built just three. According to Nelson, "The use of these things is about reconnecting with natural worlds." Source: The Outbound Collective

Whether you're a kid at heart, a kid in actuality or just someone who always wanted to live like an Ewok, you'll understand the "primordial magic of treehouses." So says the preface to a 2013 New York Times interview with Pete Nelson, a former house builder who now plies his trade slightly above ground level.

Nelson founded a treehouse design and supply firm in the 1990s before opening his own honest-to-goodness treehouse hotel in 2006. The hotel, TreeHouse Point, features six treehouses spread over four acres of forest in Issaquah, Washington.

Given the hotel's uniqueness and all-around awesomeness, reservations have become increasingly hard to come by. While you may not be able to book one of TreeHouse Point's arboreal abodes for this year's summer vacation, you can at least get a taste of treehouse living and learn its surprising ins and outs in the gallery below:

After this look at TreeHouse Point, tour Italy's five-story urban treehouse and the world's largest treehouse in Tennessee.