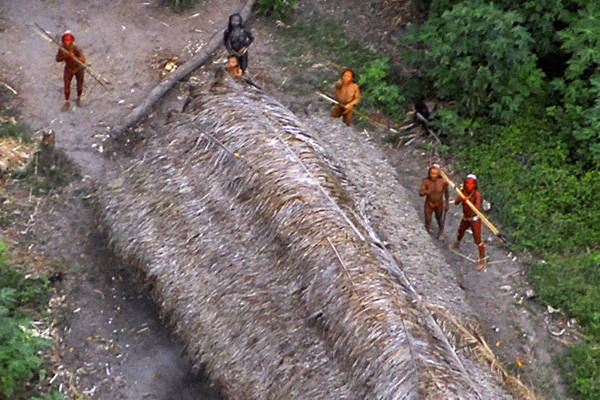 travelingman/FlickrAn aerial view of the “arrow people” of Brazil.

They’re commonly called the “arrow people.” An isolated tribe from an area of Brazil called the Javari Valley, so little is known about them that we even have no idea what language they speak or what their ethnicity is.

What we do know is that they have great skill with bows and arrows and that they will launch poison arrows at you for encroaching on their land.

Journalist Scott Wallace, hoping to protect the Flecheiros and the resource-rich land on which they live from commercial interests, journeyed into virgin Brazilian territory in 2002. His goal was to obtain proof of the tribe’s overall health and safety so that he could further fight for their protection.

While on this expedition, Wallace’s team had to leave a safe distance between themselves and the arrow people. Otherwise, they could spread germs to the natives that they had no immunity to — or end up dead themselves. The team uncovered low-lying huts and perfectly-formed bowls before they ascertained the health of the tribe and got the heck out of the Amazon.

However, the Brazilian government has since slashed the budget to the agency charged with protecting the Amazon’s uncontacted tribes and indigenous peoples. Just recently, a group mining illegally in the area confessed to killing and dismembering a group of about 10 of the arrow people and stealing their jewelry and tools.

After this look at uncontacted tribes like the Sentinelese and the Korowai, read the heartbreaking story of the Fleicheros killed and chopped up by gold miners. Then, check out Tristan da Cunha (a.k.a. “Edinburgh of the Seven Seas”), the most remote human settlement on Earth.