Unity Valkyrie Mitford moved to Germany in 1933 to get next to Adolf Hitler — and managed to become one of his closest admirers. 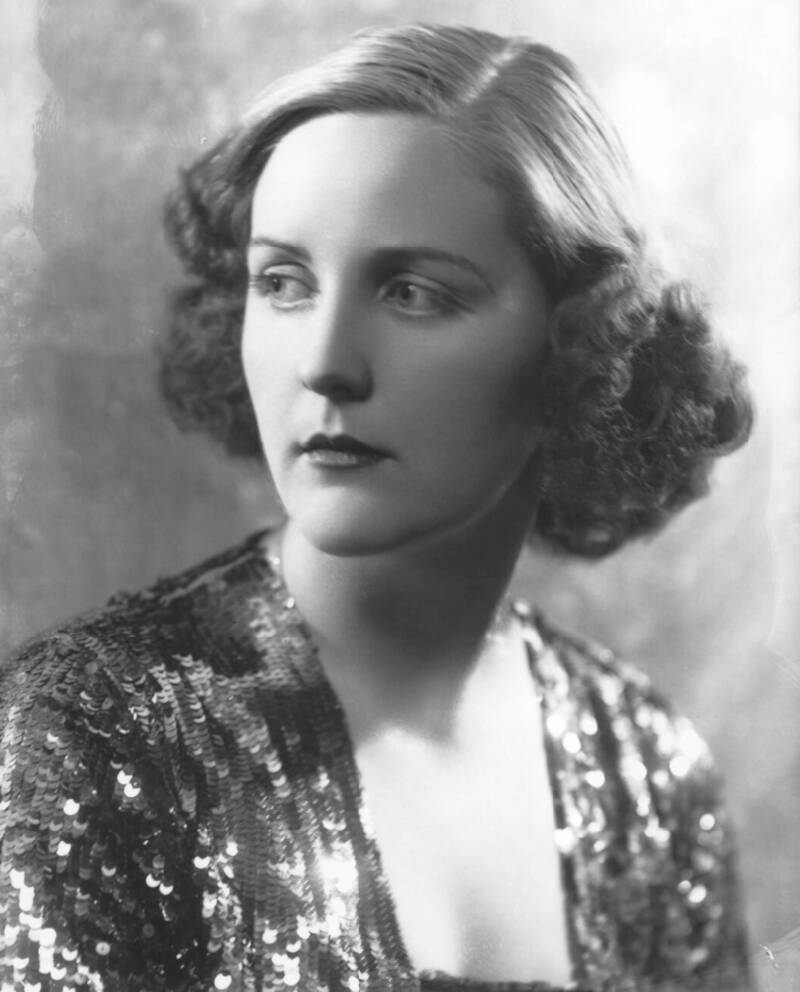 National Portrait GalleryUnity Valkyrie Mitford fell in love with Adolf Hitler at a young age. A virulent anti-Semite, she embraced his ideology even as Germany and Great Britain careened toward war.

Though Unity Mitford was born to British nobility and was related to Winston Churchill through his wife, she was an outspoken fascist enamored with Adolf Hitler.

Described by the British Secret Services as “more Nazi than the Nazis,” Mitford was even admired by Hitler himself, who dubbed her “a perfect specimen of Aryan womanhood.”

Mitford’s infatuation with the Führer would end in tragedy. Her loyalties painfully divided, she attempted suicide after Hitler invaded Poland in 1939. But even though she shot herself in the head, she didn’t die from the wound. She was sent to Switzerland to recover and then spirited back to England by her mother and sister.

Unity Mitford would live out the rest of her life as an invalid. Ultimately, the bullet in her brain would accomplish its original goal, as she died of meningitis in 1948 at the age of 33.

This is the strange story of Unity Mitford: the British socialite who may have seduced Adolf Hitler. 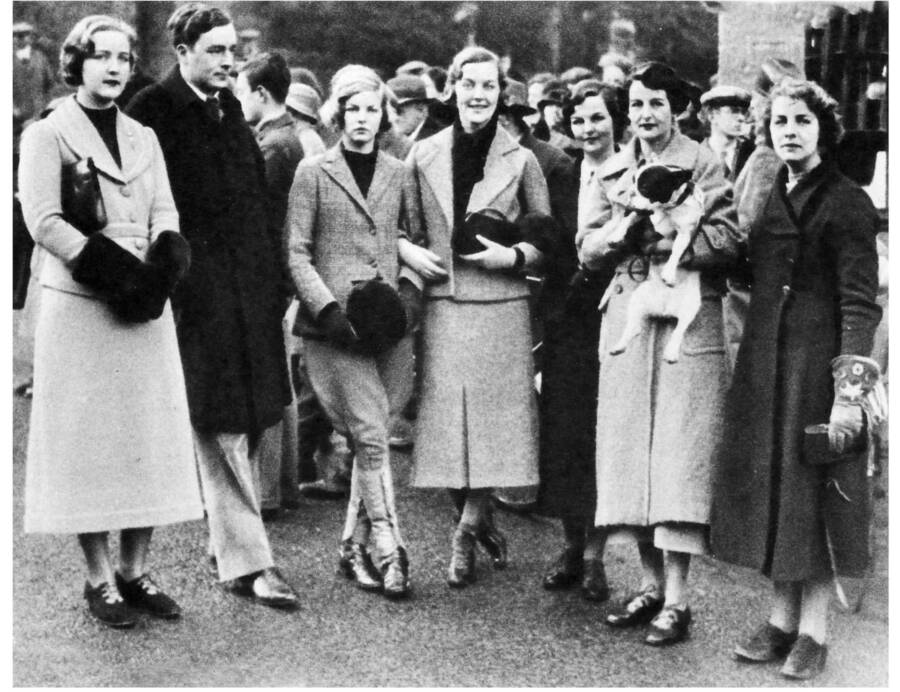 The Illustrated London News Picture Library, London, UK, via Bridgeman ImagesA rare photo of Unity Mitford (far left) and her siblings. The Mitford sisters were known for their varied — and often scandalous — lives.

Unity Mitford was born in London on Aug. 8, 1914. In some ways, she seemed predestined to chase Nazism, as she was conceived in Swastika, Ontario, and her middle name was “Valkyrie,” which is a female figure from Norse mythology that chooses who lives and dies in battle.

Born into a large, aristocratic family, Mitford’s early life was defined by a constant struggle to distinguish herself from her six siblings. Jan Dalley, a biographer of her sister, Diana, wrote that each sister sought to distinguish themselves in later years: “Unity found life in her big family very difficult because she came after these cleverer, prettier, more accomplished sisters.” 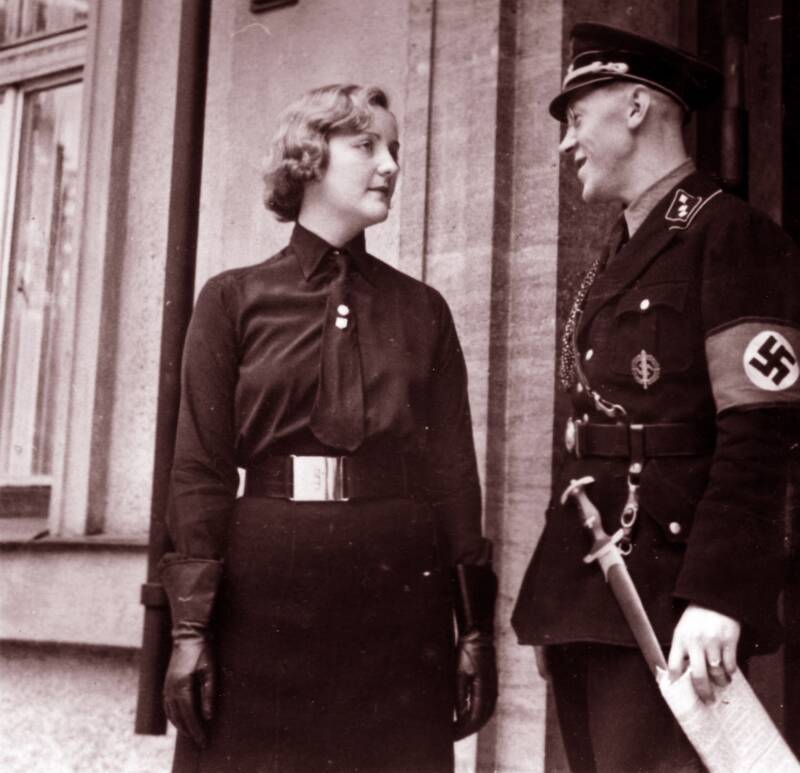 Such declarations caught the attention of their parents. Greatly suspicious of Hitler, the wealthy Mitfords were outraged by their rebellious daughter’s newfound obsession, though their mother did support fascism generally.

“The desire to shock was important,” Dalley noted. “It was the way that she made herself feel special. When she discovered Nazism was a fantastic opportunity to shock everybody in England, she’d discovered the biggest tease of all.”

Unity Mitford, therefore, took to driving around with swastika pendants on her car and giving the Nazi salute to family and friends. Soon, her obsession would transform into something tangible.

The Spoils Of Hitler’s Inner Circle 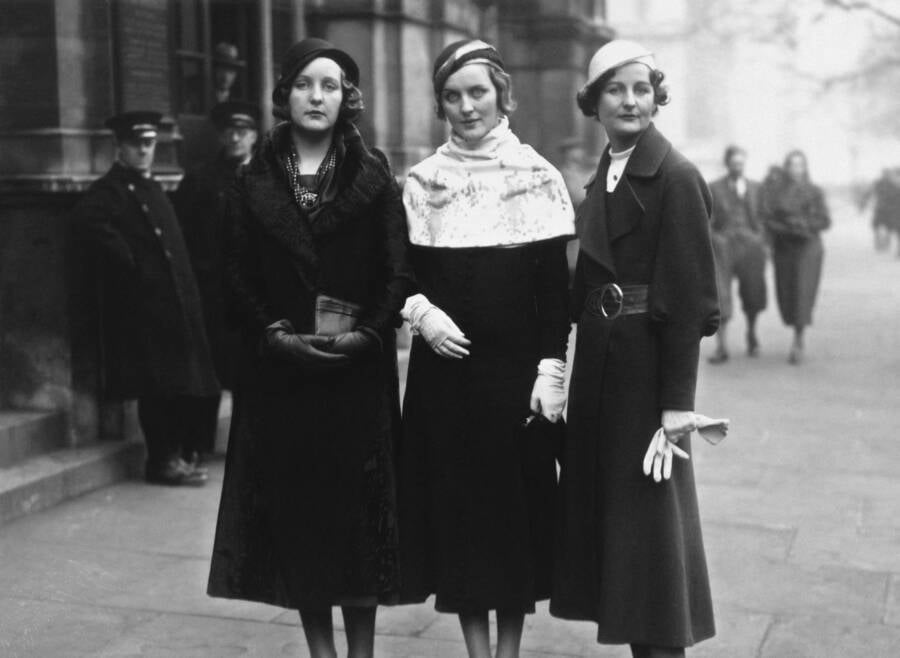 Getty ImagesThree of the Mitford sisters in 1932. From left to right: Unity Mitford, Diana Mitford, and Nancy Mitford.

Unity Mitford wasn’t the only sister enamored with fascism. Her older sister, Diana, began an affair with Oswald Mosley, the leader of the British Union of Fascists. Against their father’s wishes, the sisters joined Mosley’s organization on a trip to Nuremberg, Germany, where they attended the infamous 1933 Nuremberg Rally that foreshadowed Hitler’s rise.

Enchanted by the sight of Hitler, Unity Mitford soon moved to Munich with the hope of meeting him in person. Upon arriving in the city, she took to frequenting his favorite restaurant, the Osteria Bavaria. For months, she sat a table or two away from the Führer until he took notice and invited her to dine with him one afternoon.

Hitler saw fate in Mitford’s birthplace and middle name, which was also an homage to one of Hitler’s favorite composers, Richard Wagner, who had written the song “Ride of the Valkyries.”

“I think I am the happiest girl in the world,” she wrote to her sister Diana following their first encounter.

Despite Hitler’s initial reservations about Mitford — both she and Diana were regarded as “painted hussies” by Hitler’s aides — the Führer grew fond of the British socialite. In a copy of his book Mein Kampf, which he gifted to her, Hitler wrote, “I am always with you however far away you may be. You are always next to me. I will never forget you.” 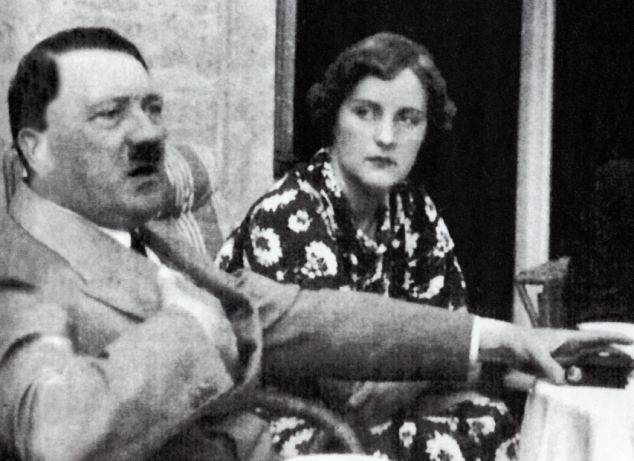 NewstatesmanAdolf Hitler and Unity Mitford in 1936.

Mitford established herself as an important member of Hitler’s inner circle. She was a popular guest at the Berghof, his vacation home in the Bavarian Alps. She also was seated in a private box during the Berlin Olympics and stood by the Führer’s side when he announced the annexation of Austria two years later.

During this time, Unity Mitford did not just enjoy the spoils of fascist high life, but actively contributed to the Nazi Party. She gave a speech before thousands at a Hitler Youth rally, was arrested in Prague for spreading Nazi propaganda, and made no secret of where her loyalties lay.

In 1935, she wrote an open letter that proclaimed, “We think with joy of the day when we shall be able to say with might and authority: England for the English! Out with the Jews!” In case anyone had missed her point, Unity added a P.S., which requested that her full name be printed, because “I want everyone to know I’m a Jew-hater.”

But not everyone was thrilled with Unity Mitford’s allegiance with the top Nazi.

Some of Hitler’s aides worried that she was a spy of the British government. Hitler’s long-time mistress, Eva Braun, didn’t appreciate that the “Valkyrie” was competing with her for the Führer’s affection. She reportedly even tried to kill herself because of her jealousy.

But Unity Mitford remained single-minded in her obsession. In her papers, which were examined after her death, she gushed that all she wanted was to go “to heaven and sit there with the Führer for ever and ever.” 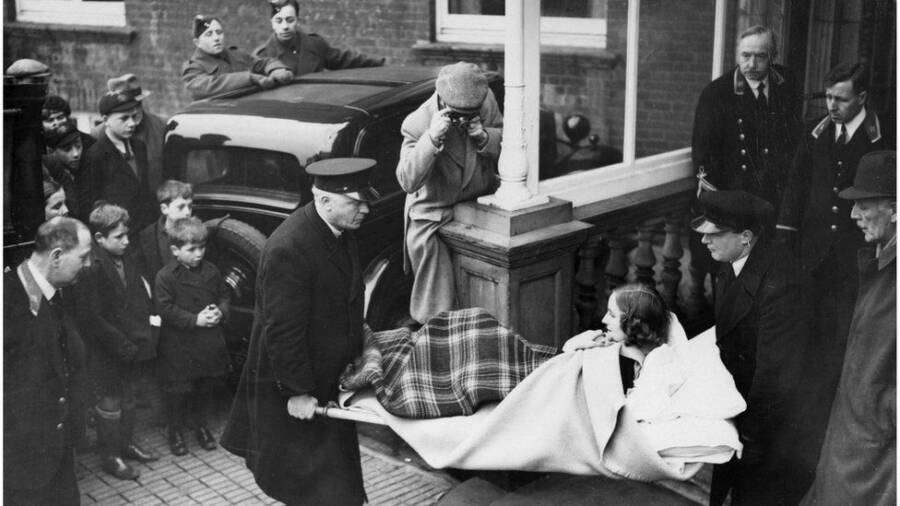 As Unity Mitford dreamt of a fascist revolution in England that would unite German and Britain without bloodshed, the two European powers quickly rushed toward war.

When Hitler warned the Mitford sisters that war with England was starting to look inevitable, Diana took his advice and fled Germany for England. Unity Mitford chose to stay behind.

“She told me that if there was a war,” Diana said in an interview from 1999, “which, of course, we all terribly hoped there might not be, she would kill herself because she couldn’t bear to live and see these two countries tearing each other to pieces, both of which she loved.”

When Britain declared war on Germany following the latter’s invasion of Poland in 1939, Unity Mitford was reportedly devastated. Her sister Deborah later wrote, “Everything [Unity] lived for was shattered by the outbreak of war between the countries she loved.”

Using a pistol that Hitler had gifted her, Mitford shot herself in the head in the English Garden in Munich. Miraculously, she survived. With a bullet in her brain, Mitford was sent to a hospital in Munich, then transferred to Bern in neutral Switzerland.

“We were not prepared for what we found,” Deborah recalled. “The person lying in bed was desperately ill. She had lost two stone, was all huge eyes and matted hair, untouched since the bullet went through her skull. The bullet was still in her head.”

They brought her home to England. 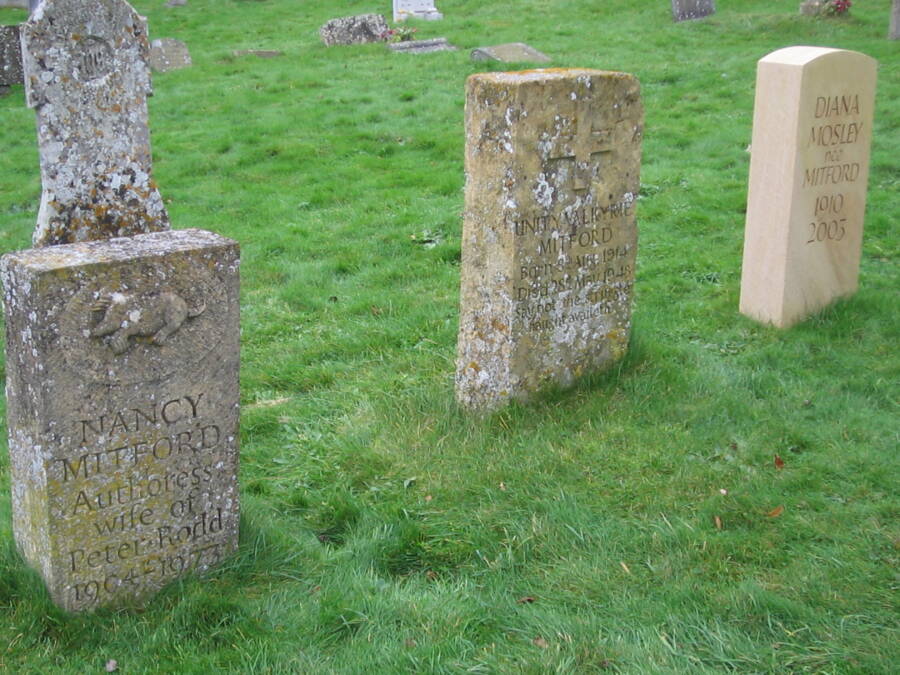 Wikimedia CommonsUnity Mitford’s grave. She is buried between Mitford sisters Nancy and Diana.

After her suicide attempt, Unity Mitford was a far cry from the girl who had once attempted to seduce Adolf Hitler. “She could not walk, talked with difficulty and was a changed personality, like one who had had a stroke,” her sister Deborah wrote. “Not only was her appearance shocking, she was a stranger, someone we did not know.”

Eventually, Mitford regained the ability to walk and talk. However, her behavior remained childish, as if she’d lost the last several years of her life.

But she also retained an obsession with politics. She often told her caretakers that, while she was happy to be back in England, she was not on their side in the war. Though she could remember nothing of her suicide attempt, she remembered her loyalty to Hitler. She even vowed that if she had a son, she would name him Adolf.

Though she outlived the Führer by three years, she would not have a son named Adolf. Because the bullet in her brain was never removed, she developed a lethal case of meningitis and died in 1948.

After learning about Unity Mitford, check out these 33 photographs of life in Nazi Germany. Then, learn about Alice Stock, Hitler’s Jewish neighbor.