Ursula Haverbeck is now finally behind bars after years of making proclamations like "The Holocaust is the biggest and most sustainable lie in history." 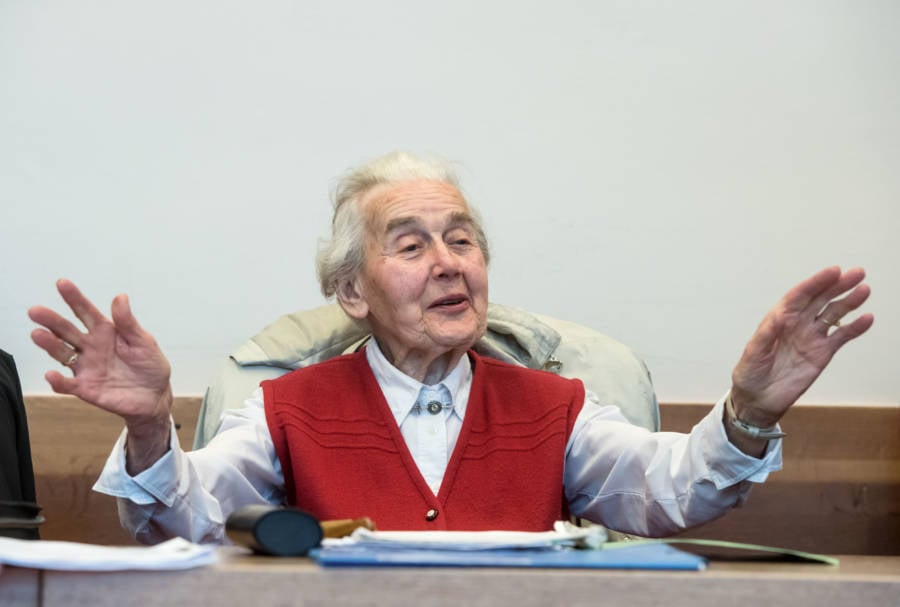 For several decades now, she’s been dragged into court again and again for spreading lies that claim the Holocaust never happened.

Whether it was handing out leaflets or sharing her views on YouTube, she kept telling anyone who would listen that the murder of millions by Nazi Germany both before and during World War II was all a myth. And though Ursula Haverbeck may look like a kindly old lady, this 91-year-old “Nazi Grandma” is just as hateful as her rap sheet suggests.

For more than 50 years before she began facing serious legal consequences for her views, Ursula Haverbeck stood by her husband, Werner Georg Haverbeck, who was a powerful Nazi Party official. After he died, she continued to deny the Holocaust despite the German government’s efforts to slow her down.

Ursula Haverbeck — born in Hesse, Germany in 1928 — met and fell in love with her future husband, Nazi official Werner Georg Haverbeck, after the war. A key figure in the Nazi Party before the war, Werner didn’t put his extremist views away after Germany surrendered and instead used several organizations to try to keep the spirit of the party alive.

Together, he and his wife founded the Collegium Humanum think tank in 1963. The organization was meant to disseminate neo-Nazi views and downplay the role of Nazi Germany in the Holocaust.

Ursula Haverbeck especially promoted the “Auschwitz lie,” which argued that the concentration camp was not, in fact, an extermination facility but a mere labor camp. Meanwhile, she repeatedly made proclamations along the lines of saying that the Holocaust was “the biggest and most sustainable lie in history.” 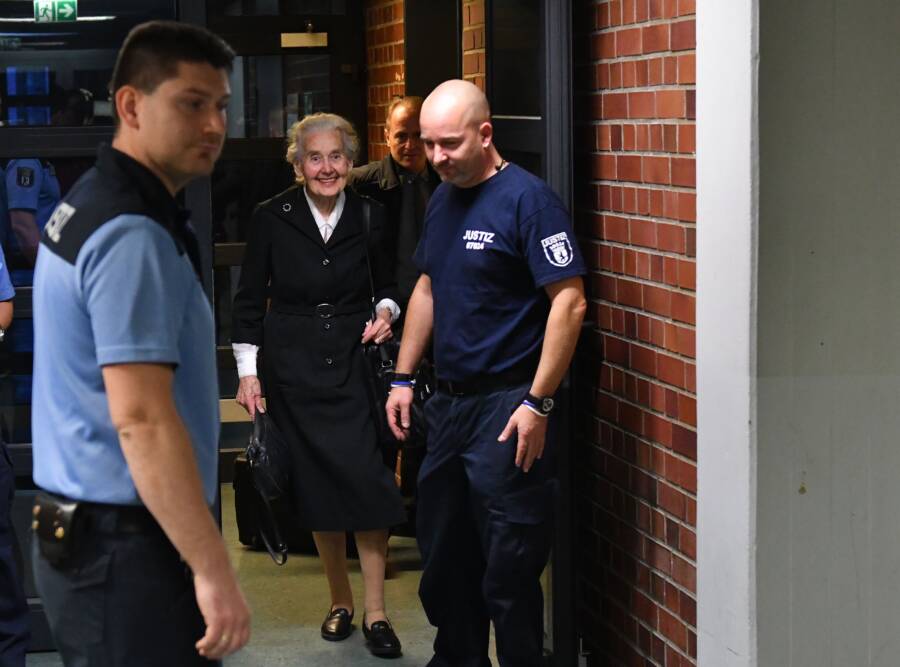 PAUL ZINKEN/AFP via Getty ImagesUrsula Haverbeck arrives for the start of her trial in Berlin on October 16, 2017.

At the same time, Haverbeck wrote for the Voice of the Empire publication, spreading right-wing lies full of faulty, revisionist history. She and her compatriots used every opportunity they could get to deny that the Holocaust ever happened.

Despite Holocaust denial being a crime in Germany, the Haverbecks openly shared their views from the 1980s until 2008, when authorities shut down the Collegium Humanum. But though the think thank was no more and though Werner died in 1999, Ursula continued on despite the persecution and began to amass a nationwide following.

Whether in print or online, Ursula Haverbeck has made a career out of propagating lies about the Holocaust. In one of her YouTube videos, for example, she said that a noted German journalist, Fritjof Meyer of Der Spiegel, published a report in May of 2002 claiming that no Jews were gassed inside Auschwitz at all. She also claimed that Meyer said that just 365,000 people, not 1.1 million, met their deaths in a gas chamber just outside of Auschwitz rather than in the concentration camp itself. 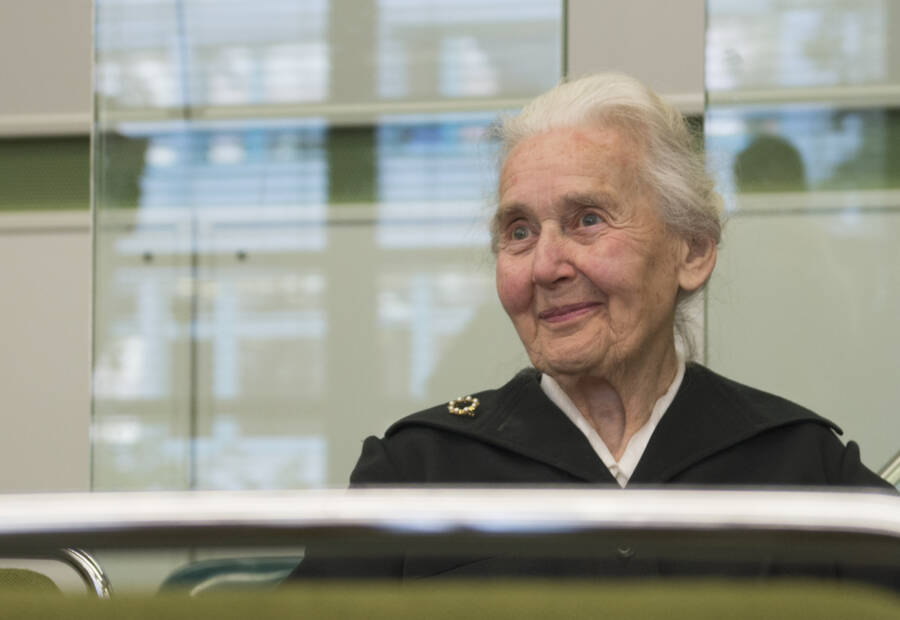 PAUL ZINKEN/AFP via Getty Images“Nazi grandma” Ursula Haverbeck awaits the commencement of her trial in 2017.

In 2015, at the trial of Oskar Groening, the “accountant of Auschwitz,” Haverbeck distributed a leaflet entitled “Mass-murder in the concentration camp Auschwitz?” that questioned the deaths that occurred there.

Haverbeck even espoused these views directly to politicians. She penned a letter to the mayor of Detmold, Rainer Heller, in which she tried to convince him of the “Auschwitz lie.”

After years of facing fines and other minor legal consequences for her views, this is finally what landed her in serious legal trouble.

The “Nazi Grandma” Goes To Prison

Ursula Haverbeck was convicted on Holocaust denial charges of inciting hatred in 2016 due to the letter she wrote to Heller. Denying the Holocaust in Germany has been outlawed since 1985 and can carry a maximum prison sentence of up to five years.

Haverbeck was initially sentenced to eight months in prison following her 2016 trial. Then, after distributing a pamphlet entitled “Only the truth will set you free” to the judge, prosecutors, and even to reporters in attendance at her trial, she was given an additional 10 months on her sentence (the 18 total months were later reduced to 14). 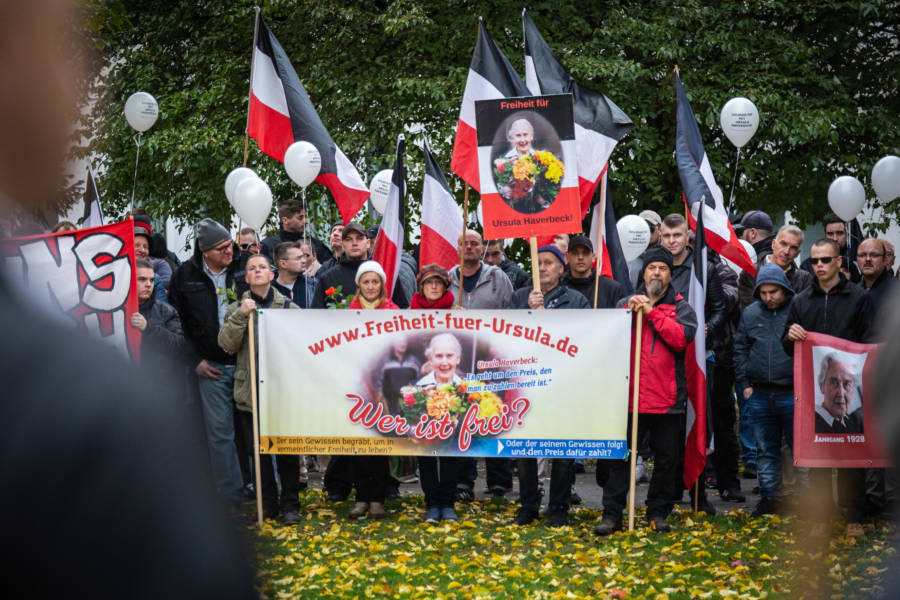 On top of this charge, Haverbeck received an additional sentence of six months by a district court in Berlin in 2017 for claiming at a public event that Holocaust gas chambers “were not real.” Later that same year, she was finally sentenced to a total of two years by a regional court in Lower Saxony.

She appealed her convictions, which delayed her prison sentence, but she eventually ran out of second chances.

Ursula Haverbeck’s appeals ran out in spring 2018 and she was expected to begin her two-year prison term, only she never showed up to serve. Authorities feared that she had fled when neither she nor her car were initially found at her home.

However, Haverbeck returned home and police apprehended her in early May 2018. She is currently serving her two-year sentence. And with a failed bid for early release in December 2019, it looks like the “Nazi Grandma” will be behind bars for a little longer yet.

After this look at Ursula Haverbeck, check out how 95-year-old ex-Nazi Jakiw Palij finally got his comeuppance. Then, read about the fearless Freddie Oversteegen, the Dutch resistance fighter who used romance to lure and murder Nazis.