The Complicated Legacy Of Valentina Tereshkova, The Only Woman To Ever Fly Solo In Space

Once revered as the first woman in space, Russian cosmonaut Valentina Tereshkova has since become a contentious figure as she has fought to keep President Vladimir Putin in power. 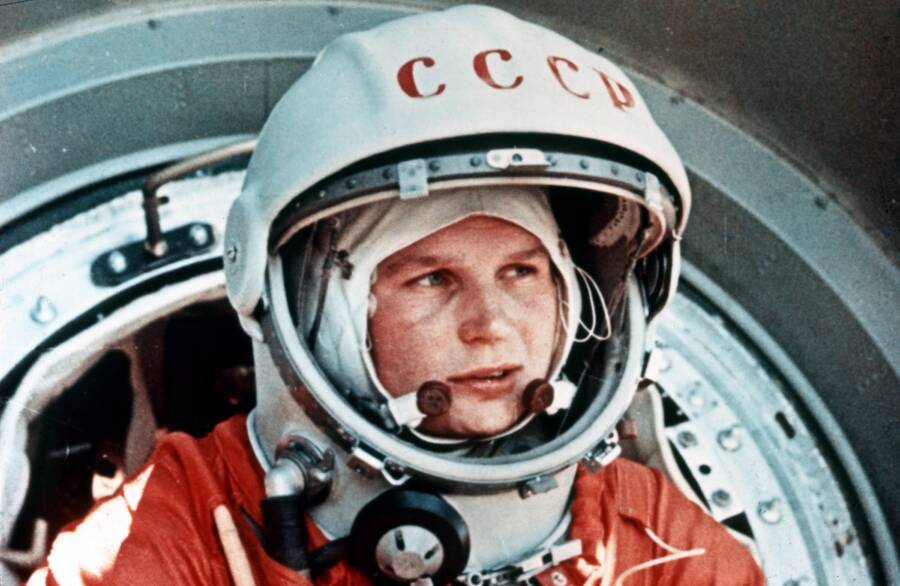 Sovfoto/Universal Images Group via Getty ImagesSoviet cosmonaut and first woman in space, Valentina Tereshkova, in the Vostok 6 capsule in June 1963.

In June 1983, Americans gathered around their televisions to watch Sally Ride make history as the first American woman in space — but she was not the first woman to go into space.

Indeed, that honor belongs to Russian cosmonaut Valentina Tereshkova who, two decades earlier in June 1963, made world history in a historic solo mission aboard the Soviet shuttle Vostok 6. At the time, she was also the youngest woman and the 10th person at all to go into space, orbiting Earth a startling 48 times before returning successfully.

Born in 1937 in an impoverished village nearly 200 miles north of Moscow, Valentina Vladimirovna Tereshkova’s town had neither electricity nor running water at her birth. In 2010, it was reported that the village had just nine people living there.

When Tereshkova was only two years old, her father Vladimir died in World War II. A tractor driver, Vladimir was drafted to work on a tank and died months later on a frozen battlefield.

Soon, the Soviet Union became a battlefield itself, as German forces pressed toward Moscow. Tereshkova described herself as “one of the generation of war children without toys.”

Poverty and her mother’s declining health prevented Tereshkova from achieving her dream of becoming a railroad engineer, instead, she took a job at a tire factory and later a textile factory in order to support her family.

At nights, Tereshkova attended school and nonetheless received an engineering degree from the Textile Technical Institute in 1960. 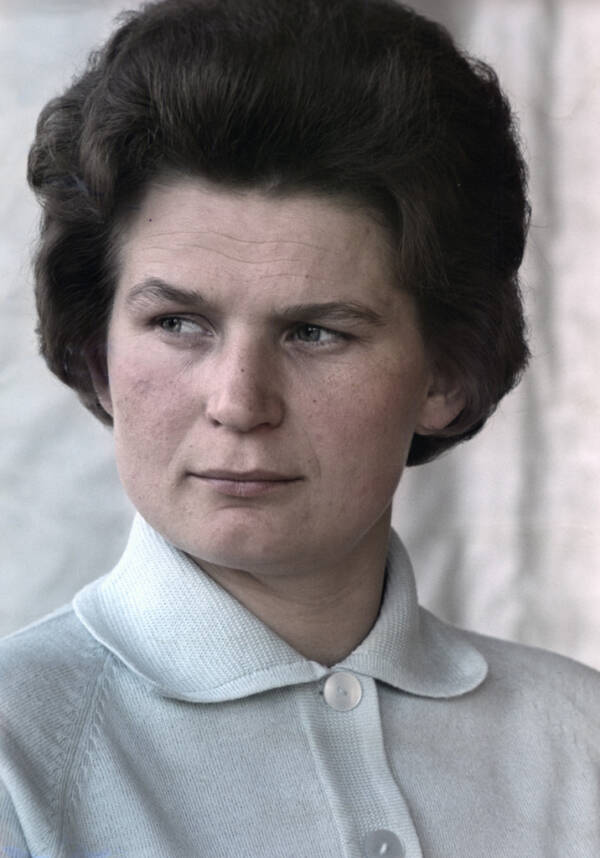 It was then that the space race caught Tereshkova’s eye. She and her airclub friends watched in awe as Yuri Gagarin became the first person in space in April 1961.

After the inspirational flight, Tereshkova’s mother declared, “Now a man has flown in space; it is a woman’s turn next.” And it was.

Becoming The First Woman In Space

So when the chance came to go to space, Tereshkova leapt at the opportunity. After Gagarin’s flight, Tereshkova wrote to the Soviet government to volunteer for female cosmonaut training. By December 1961, Tereshkova was one of just five women selected for the mission.

But the Soviets were paranoid about secrecy. Tereshkova could not even tell her family about the space program. Her relatives thought she was on a special parachute team. 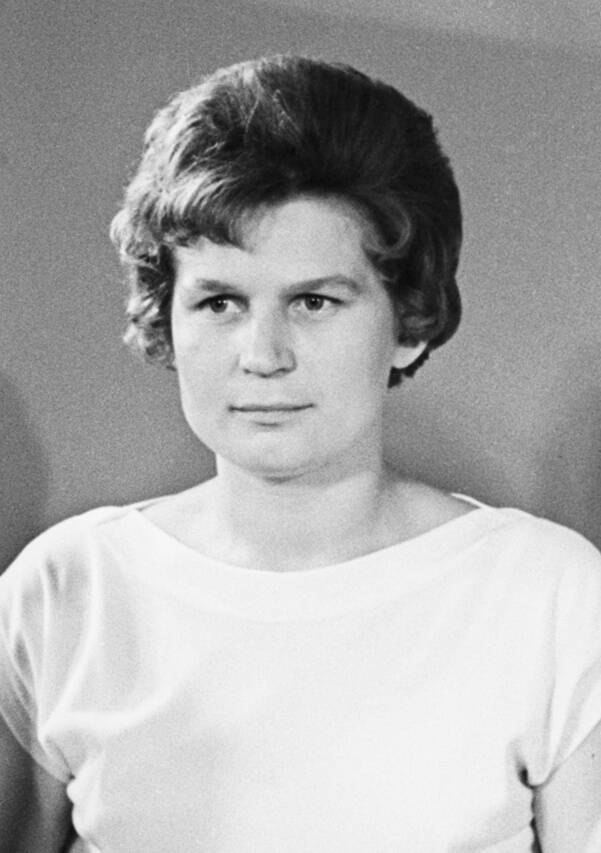 Tereshkova’s lie was not far off from the truth. Soviet cosmonauts had to eject from their space capsules once they reentered the atmosphere, so parachute training was critical for their mission.

For the next 18 months, Tereshkova and the other female cosmonauts underwent a rigorous training course. In addition to simulation space flights, the women studied gymnastics to strengthen their bodies. Tereshkova also spent days in isolation chambers to prepare for confinement in the capsule.

In June 1963, the Soviets chose Tereshkova to singlehandedly pilot Vostok 6.

On June 16, 1963, Valentina Tereshkova ate a light breakfast before stepping into the space capsule. With the call sign “chaika,” or seagull, Tereshkova blasted off, becoming the first woman in space.

As the capsule rocketed into the sky, Tereshkova yelled, “Hey sky, take off your hat. I’m on my way!”

Giving The Soviets A Leg Up In The Space Race 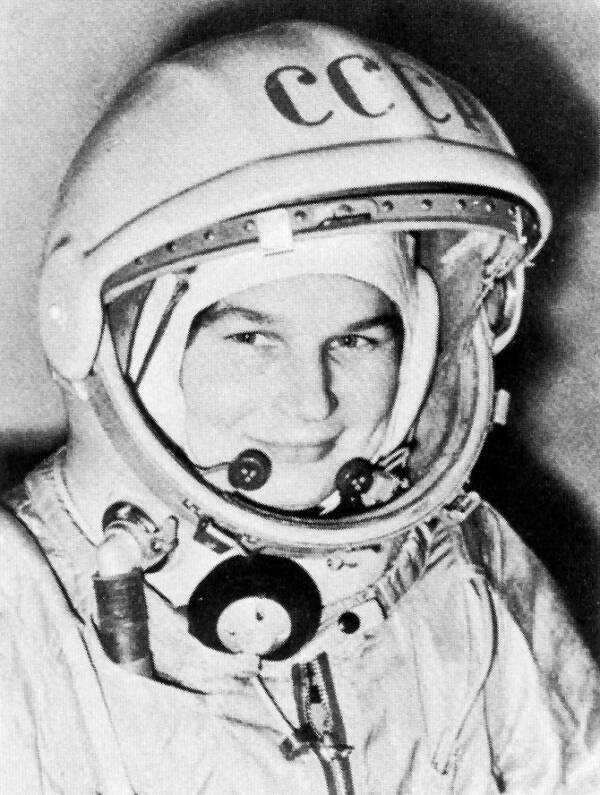 SDASM ArchivesNews of Valentina Tereshkova’s feat made her an international celebrity – while some in the West derided her as a publicity stunt.

It was while she was blasting off on live television that her family learned what she had been doing all this time. Tereshkova later admitted that her mother “was very upset that I had deceived her and it took a long time for her to forgive me.”

Of her flight, Tereshkova recalled, “As I saw the planet from space I realized how small Earth is, and how fragile, and that it could be destroyed very quickly.”

In space, Tereshkova conducted a series of tests and monitored the capsule. She spent a total 71 hours in orbit before reentering the atmosphere. When the capsule fell to 23,000 feet, Tereshkova ejected and floated down to Siberia in her parachute.

After landing a quarter mile from the capsule, Tereshkova called the Soviet Premier to announce her successful mission. “Valentina, I am very happy and proud that a girl from the Soviet Union is the first woman to fly into space and to operate such cutting-edge equipment,” Nikita Krushchev reportedly told the cosmonaut. 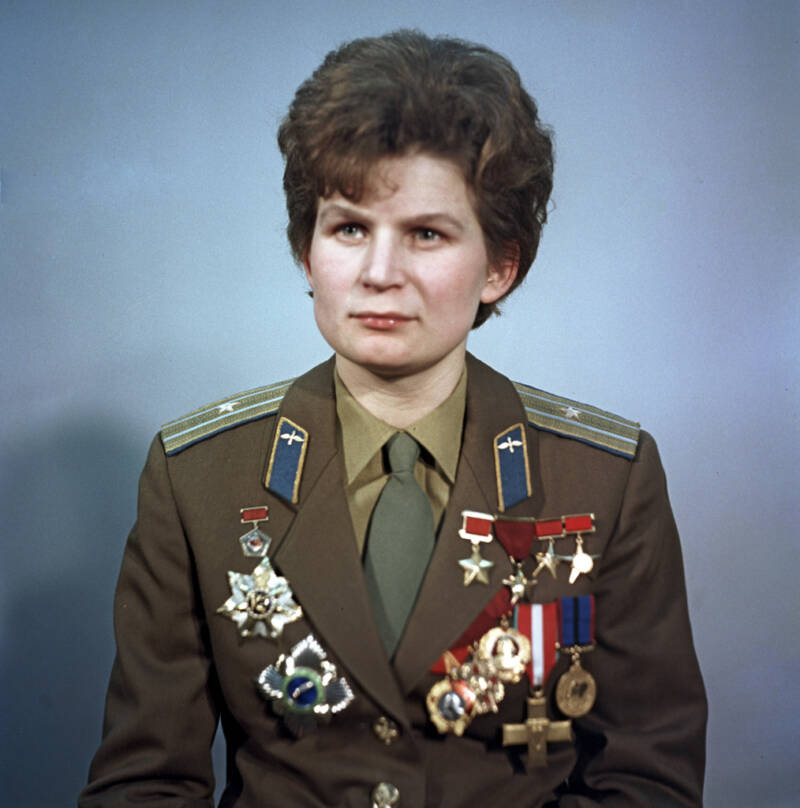 The successful mission became a coup for the Soviets in the space race. Tereshkova’s 48 orbits around the planet exceeded all American astronaut orbits combined.

After the space flight, Valentina Tereshkova became an international sensation. In November 1963, her wedding to another cosmonaut made headlines around the world. So did the birth of their daughter in 1964, who was the world’s first child born to two parents who had been in space.

Tereshkova never returned to space. She devoted the rest of her life to advocating for women’s rights and space travel. In 2008 and 2014, she carried the Olympic torch. 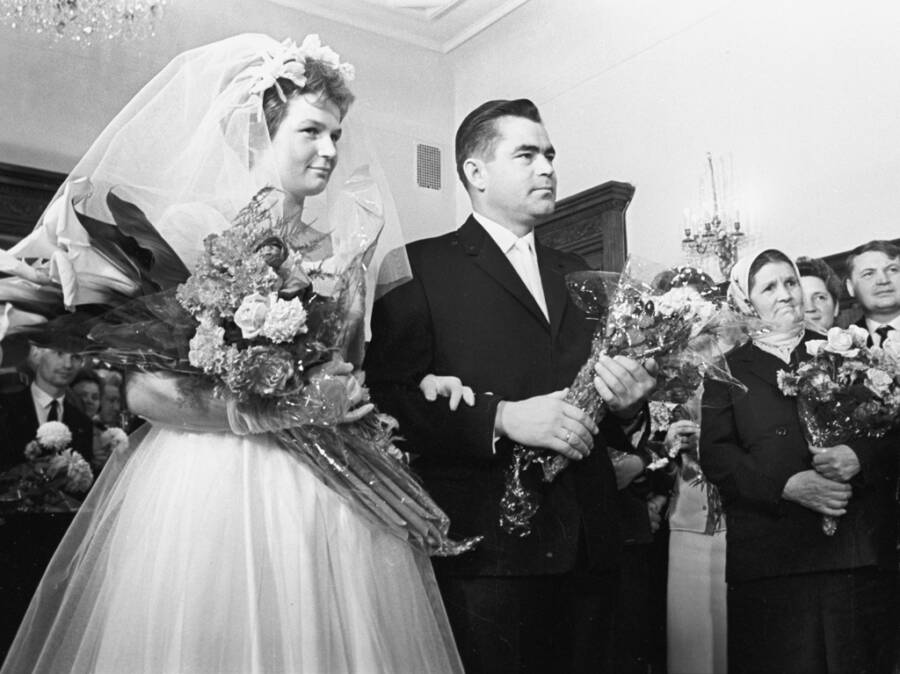 The Soviet Union believed that sending the first woman to space would represent a major victory in the space race — and it did, as the U.S. chose not to even compete until two decades later.

In the 1950s and 1960s, NASA banned women from joining the space program. Although women like Jerrie Cobb petitioned Congress and NASA, the program officially refused. The only role NASA considered for women on space missions at that time was providing “direct sexual release,” as one 1971 report put it.

NASA officials derided Valentina Tereshkova’s space flight as “a publicity stunt.” An anonymous NASA official said the very idea of women in space made him “sick to his stomach.”

In the West, journalists wrote off Tereshkova as a textile factory worker. Tereshkova fought back, arguing that her training and solo flight proved that she “needed the professional knowledge equal to that as a man.”

With the collapse of the Soviet Union in 1991, Tereshkova lost her political standing and left the space service in 1997. As of 2022, Tereshkova is 85 years old and thought to have retired to Moscow.

She became a lawmaker in Russia’s Chamber of Parliament in 2011 and came under fire in 2020 for supporting a constitutional amendment that could keep President Vladimir Putin in power until 2036. The move was widely opposed, and two petitions to remove her name from a street and her honorific titles were put forward.

But Tereshkova has seemed unmoved by the opposition, publicly stating only that her detractors are simply “unpatriotic.”

As for her historic cosmonaut career, Tereshkova said, “Anyone who has spent any time in space will love it for the rest of their lives. I achieved my childhood dream of the sky.”

After this look at Valentina Tereshkova, the first woman in space, read about Wally Funk, the woman who became an astronaut after fighting to go to space for 60 years. Then, get the tragic story on Christa McAuliffe, the teacher killed in the Challenger disaster.