21 Shocking Photos Of The Venice Floods

An exceptionally high tide left 45 percent of Venice engulfed in water. The city's mayor later tweeted, "Venice is on its knees." 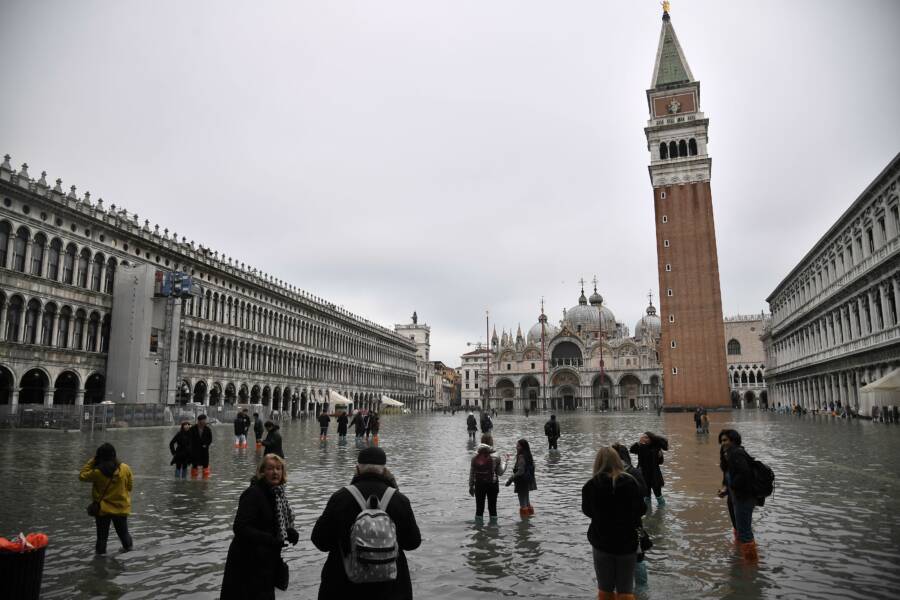 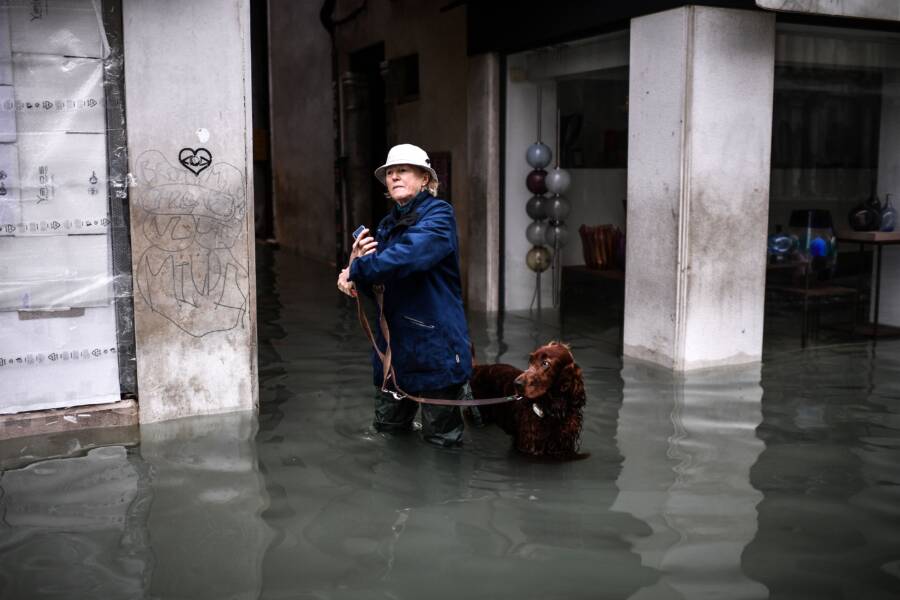 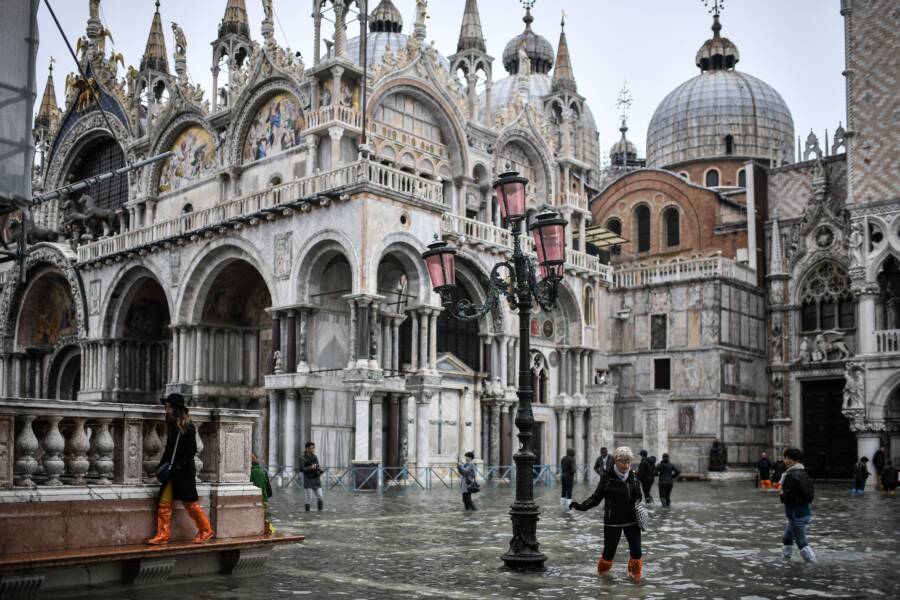 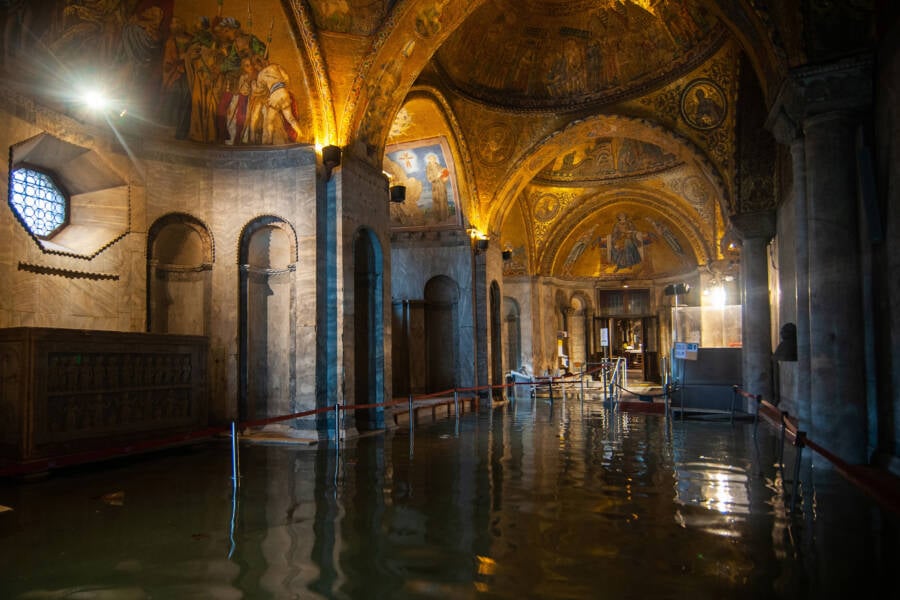 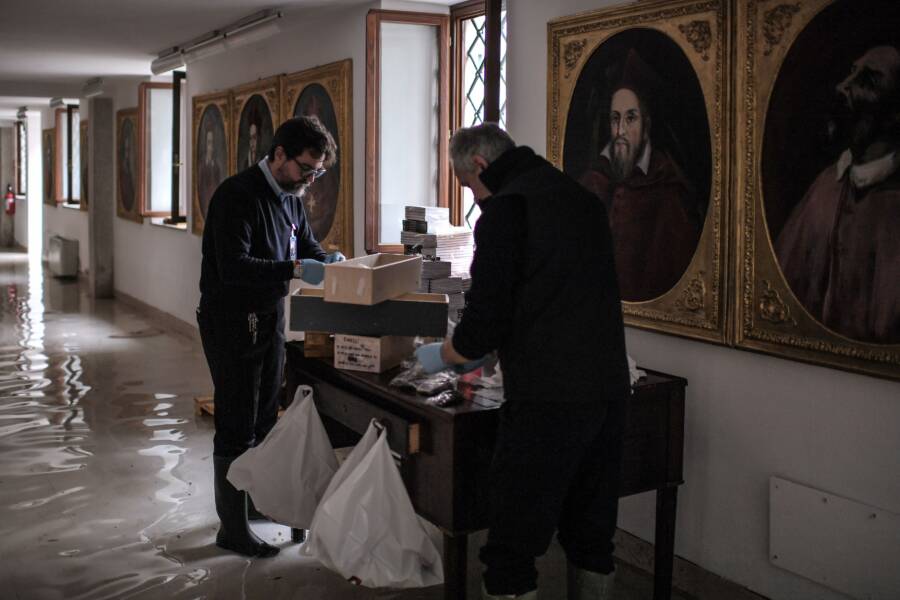 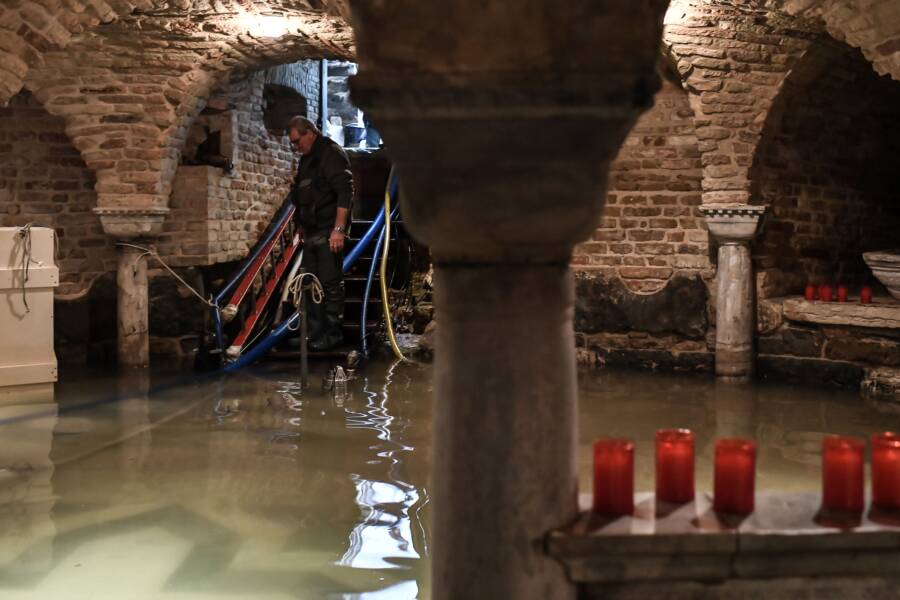 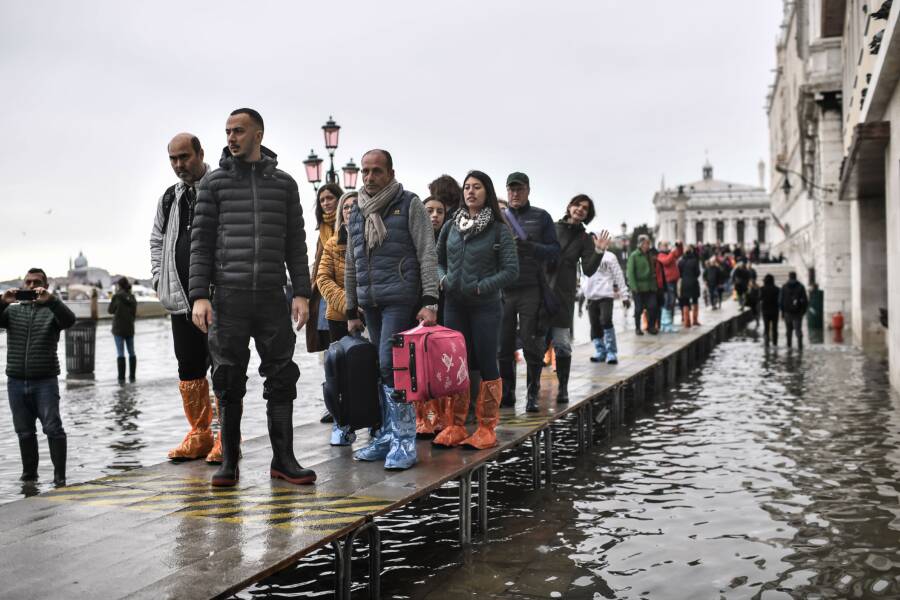 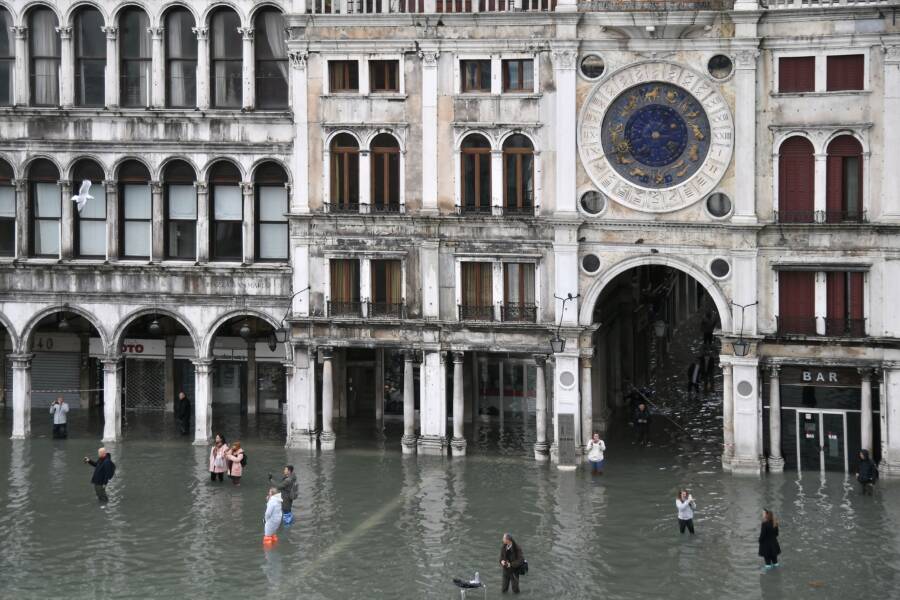 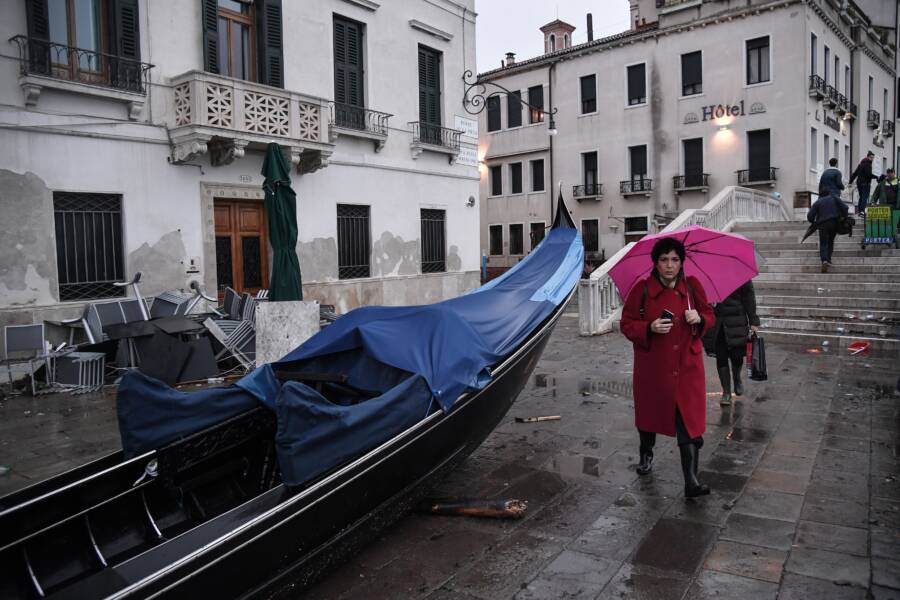 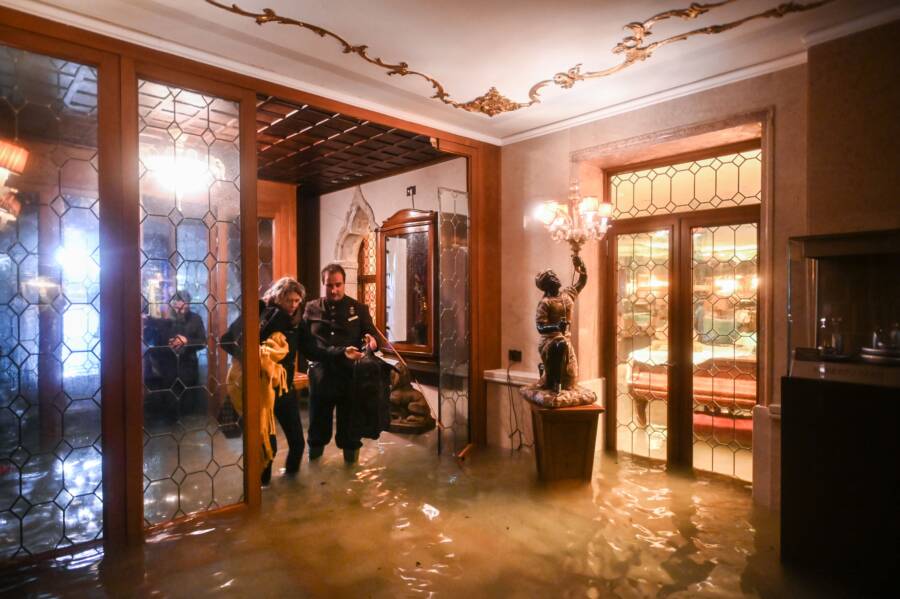 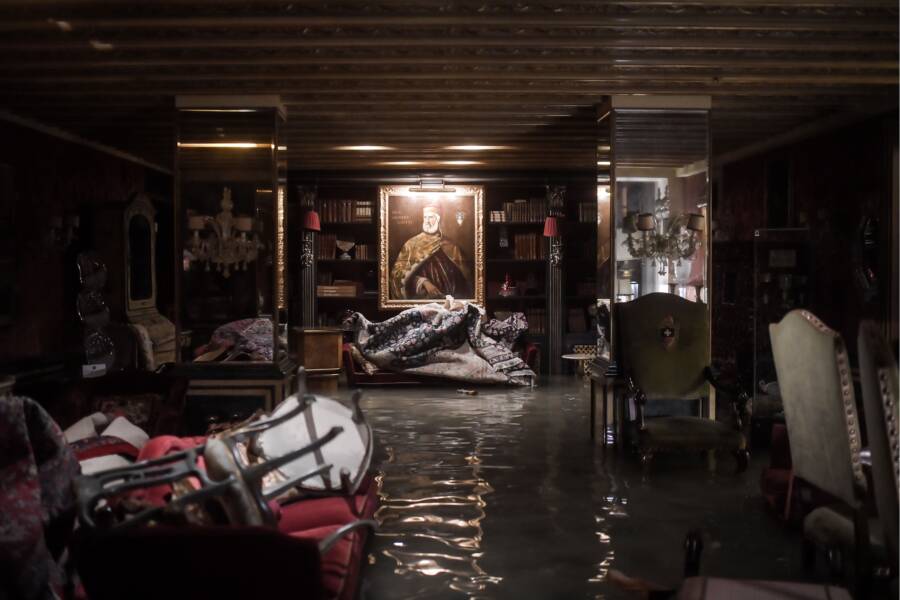 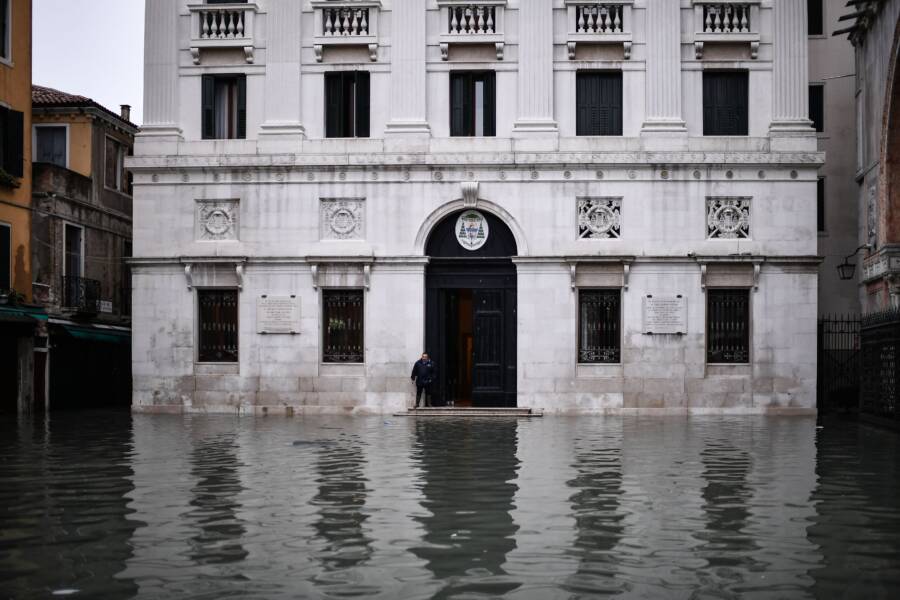 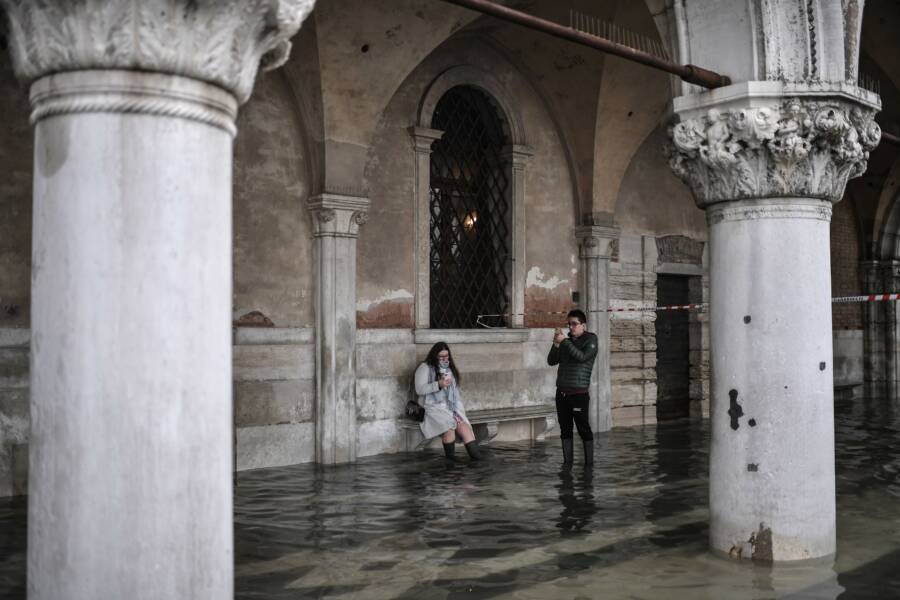 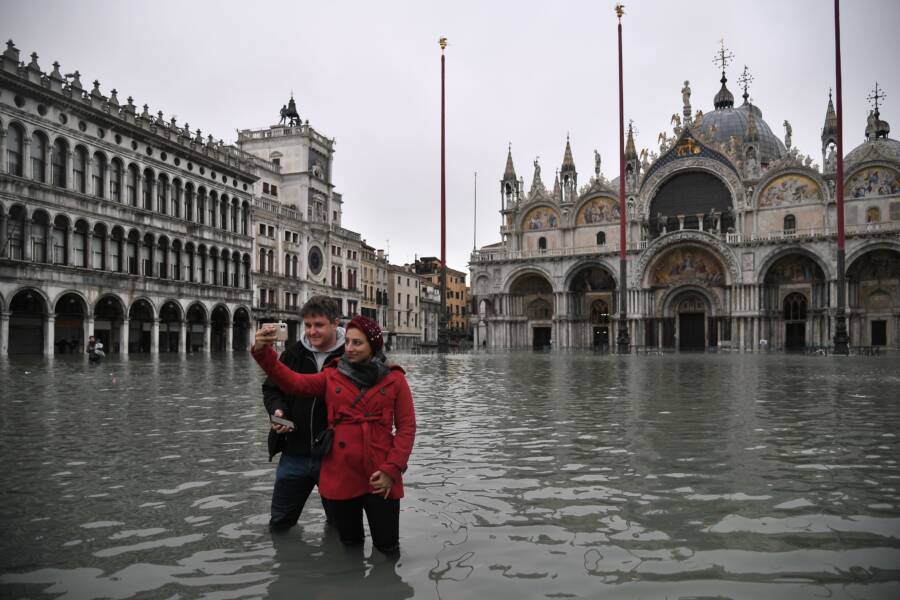 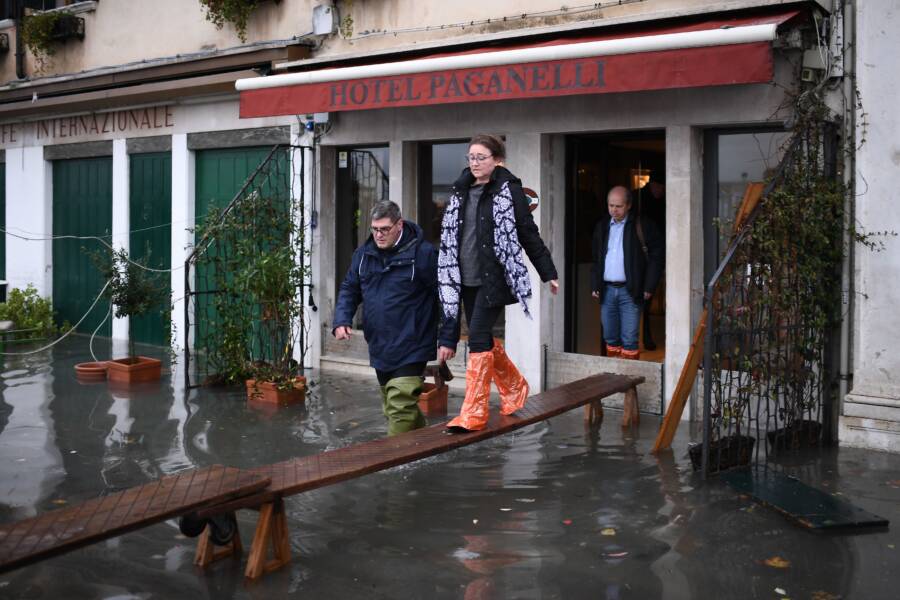 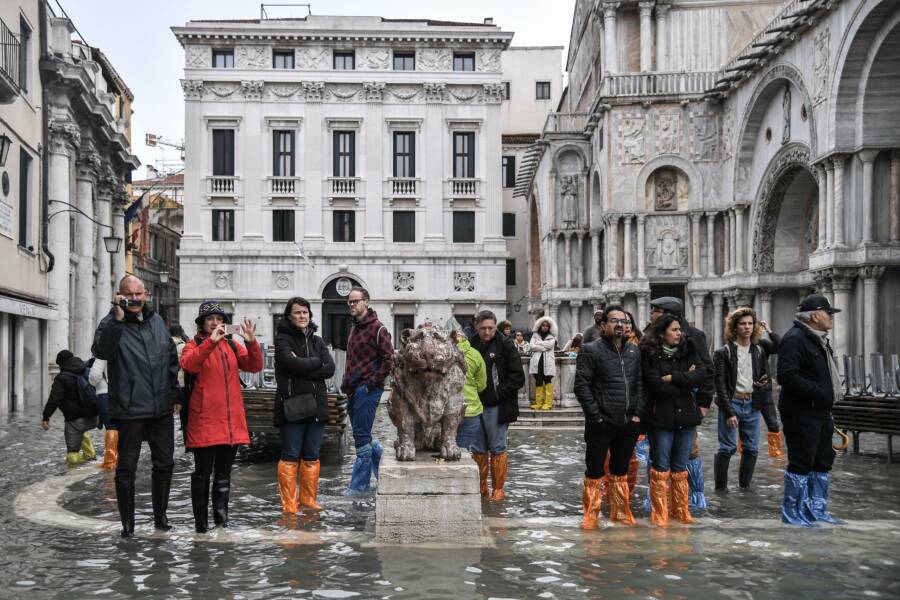 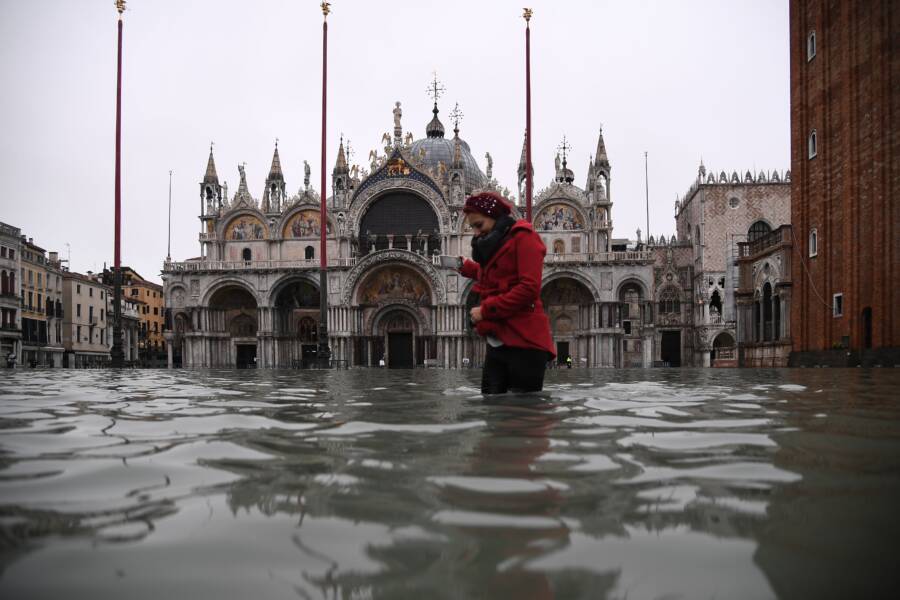 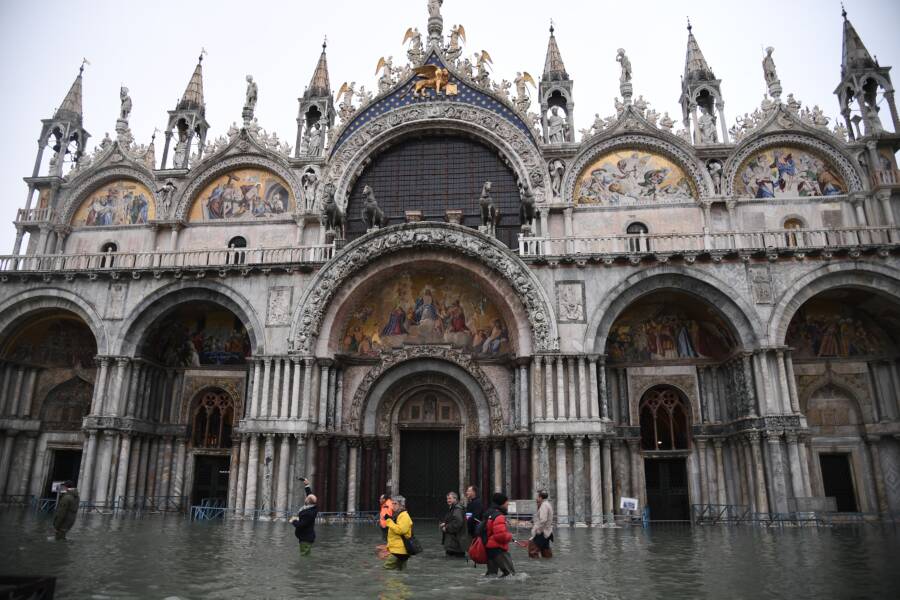 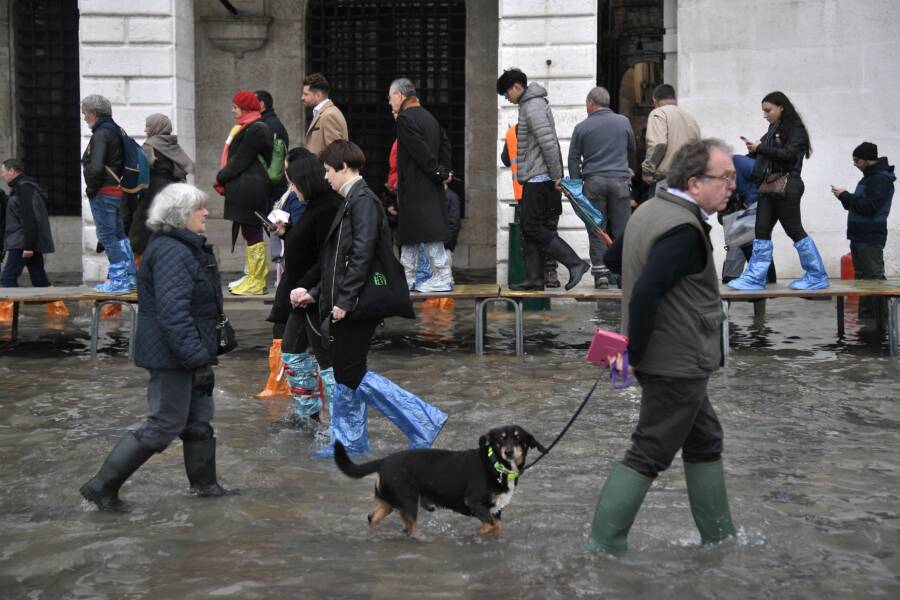 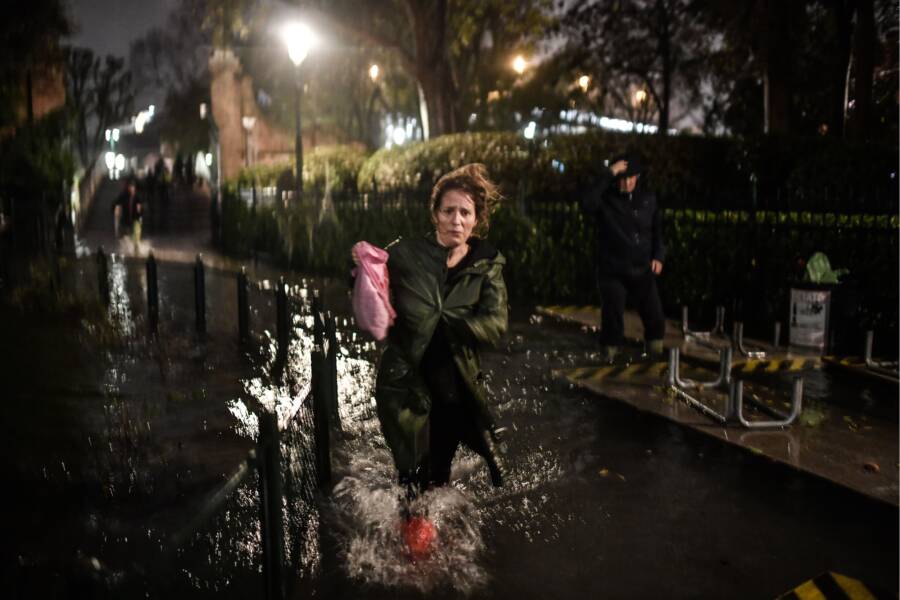 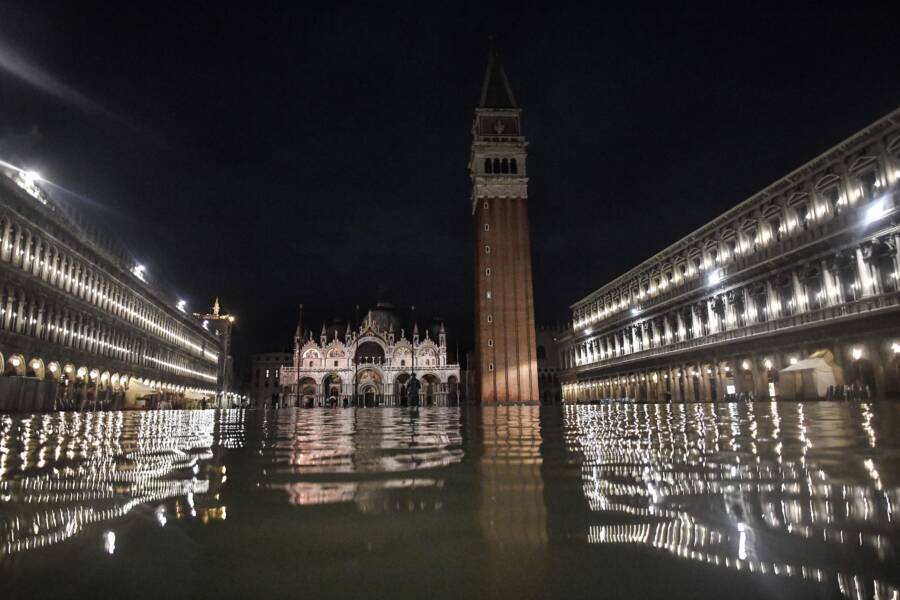 The effects of climate change continue to take their toll on seaside cities. This year, Venice was hit by an exceptionally high tide that peaked at 73.6 inches, causing massive floods and at least two deaths.

As BBC reports, at least two people — both on the island of Pellestrina — were killed during this year's flooding. One man died while trying to run electric pumps at his home, while another person was found dead elsewhere.

According to the Tide Forecasting and Reporting Center of Civil Protection, 45 percent of the city was flooded. Photos circulating online show locals and tourists wading through deep waters inundating Venice's treasured landmarks, including the 925-year-old St. Mark's Basilica.

The famous cathedral is arguably the crown jewel of Venice landmarks and is admired for its Italo-Byzantine architecture. The building, which dates back to the 9th century, also holds relics from the time of the Crusades. 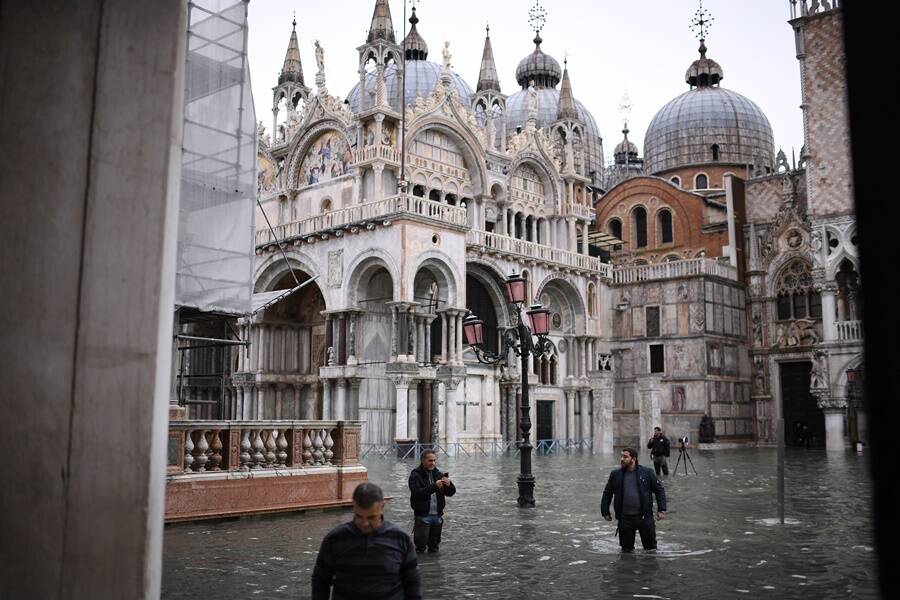 Marco Bertorello/AFP via Getty ImagesAt least two people have died following the worst flood to hit the city of Venice in 50 years.

During this year's flood, however, the church was flooded by water.

"I have never seen something like what I saw [Tuesday] afternoon at St. Mark's Square," Francesco Moraglia, the patriarch of St Mark's Basilica papal court, told CNN. "There were waves as if we were at the beach."

As a natural floating city made up of different islands, Venice is incredibly vulnerable to effects of climate change. High tides of more than 55 inches are what locals call acqua alta, and are nothing new to the city. But officials agree the flooding has gotten worse in recent years.

This year, water levels peaked at 73.6 inches — the highest levels in the region in half a century. The only time the acqua alta in Venice was higher than that level was in 1966, when a tide reached 76.4 inches high.

Venice Mayor Luigi Brugnaro tweeted photos and videos of the disaster, describing it as "a permanent mark" that would be left on the beautiful city.

"Now the government must listen," Brugnaro said. "These are the effects of climate change... the costs will be high." The mayor said the city would need hundreds of millions of euros to fix the damages caused by the recent flood.

Brugnaro later tweeted, "Venice is on its knees."

The government announced that 30 volunteers would be deployed to help with the clean-up of the aftermath, but so far it's uncertain how long the flood will last. Mayor Brugnaro has already called for a state of emergency for the city and has closed local schools for the time being.

Venice resident Elisa Aquina Laterza lives near the famed Rialto Bridge. She said the first night of the flood, residents were left without electricity. Strong gusts of wind made it difficult to venture out of her home.

"It was a night of fear and today we are blocked here at home with reduced public transport," Laterza said. "I've only witnessed this historic flood but I must say that the situation is unprecedented and our city is our land and it needs help and support from all."

Italian media reported that at least three vaporetti — the city's transportation boats — sank in the flood, while at least one was carried by the water over Venice's canal banks, leaving it stranded near the buildings.

"Going around the city we found desperate people, who said that a year ago they were in the same situation," Moraglia told The New York Times. 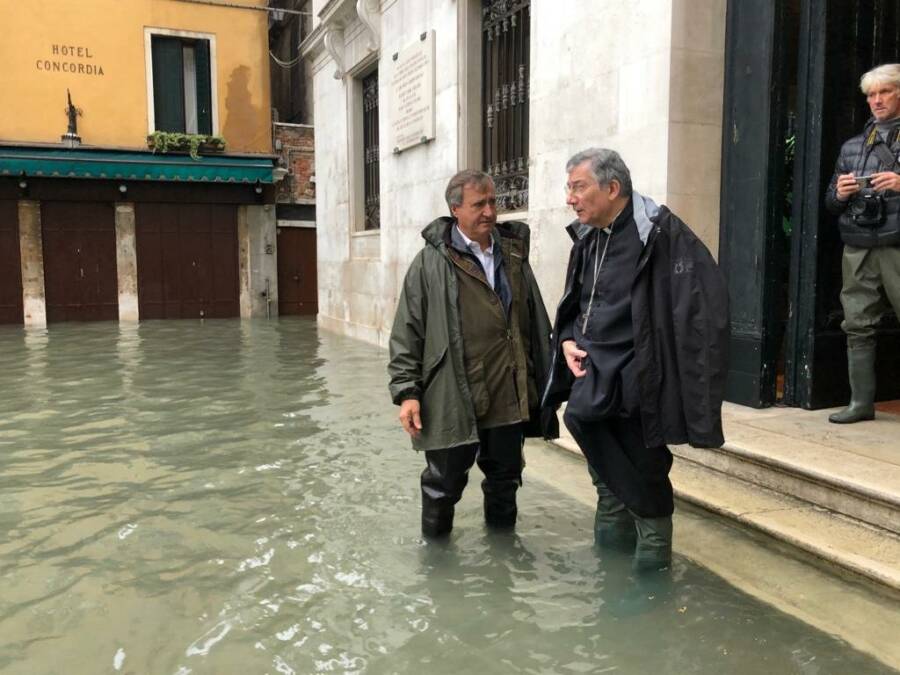 He added that the Diocese of Venice and Catholic charity Caritas would provide lodging for people who had been left homeless, emphasizing they would prioritize "fragile people in difficulty" to fill the temporary shelters.

Unfortunately, it looks like the calamity this year has yet to end as local news reports predict more flooding in the coming days.

Next, see the devastating photos of the Houston floods in 2015. Then learn about the worst natural disasters of the 21st century.