The Origins Of The 30,000-Year-Old ‘Venus Of Willendorf’ Statue Have Been Traced To Italy

Scientists used scans to determine that the Venus of Willendorf's limestone is "virtually indistinguishable" from limestone found in Italy.

In 1908, an archaeologist digging along the banks of the Danube River near Willendorf, Austria made a striking find: a 30,000-year-old limestone statue of a voluptuous woman, since dubbed the “Venus of Willendorf.” Now, scans of the statue have revealed that it likely originated in northern Italy, nearly 600 miles away.

The origins of this 4.4-inch Ice Age statue have long baffled experts. For one thing, the Venus of Willendorf is made of oolite limestone, a material that isn’t native to Willendorf — or even found within a 124-mile radius.

Where Did The Venus Of Willendorf Come From?

The small sculpture is similar to other Venus statues found throughout Europe. One of the earliest examples of a figurative sculpture in history, the Venus of Willendorf depicts “a symbolized adult and faceless female with exaggerated genitalia, pronounced haunches, a protruding belly, heavy breasts, and a sophisticated headdress or hairdo,” according to researchers.

Scientists believe the statue and others like it served ritualistic purposes and celebrated fertility, femininity, and eroticism.

To determine Venus of Willendorf’s origins, researchers turned to modern technology. A team of scientists led by Gerhard Weber, the head of the Department of Evolutionary Anthropology at the University of Vienna, used high-resolution tomographic scans to take a close look at the sediment and particles that make up the statue.

By comparing these scans to other sediment samples — sourced from “France to eastern Ukraine, from Germany to Sicily,” according to a statement from the University of Vienna — Weber and his team were able to zero in on the Venus of Willendorf’s origins.

As they described in a study published in Scientific Report, the researchers found that the Venus of Willendorf’s oolite limestone was “virtually indistinguishable” from limestone found near Lake Garda in Italy.

The Statue’s Limestone Reveals The Answers To Century-Old Questions

Scanning the Venus of Willendorf also offered up other insights about this famous statue. Within the limestone, researchers took note of sediments of “different densities and sizes,” including bits of shells as well as grains called limonites.

One of these limonites, they hypothesized, broke off as Venus of Willendorf was carved — and its sculptor decided to turn the hole into the statue’s cavernous belly button. 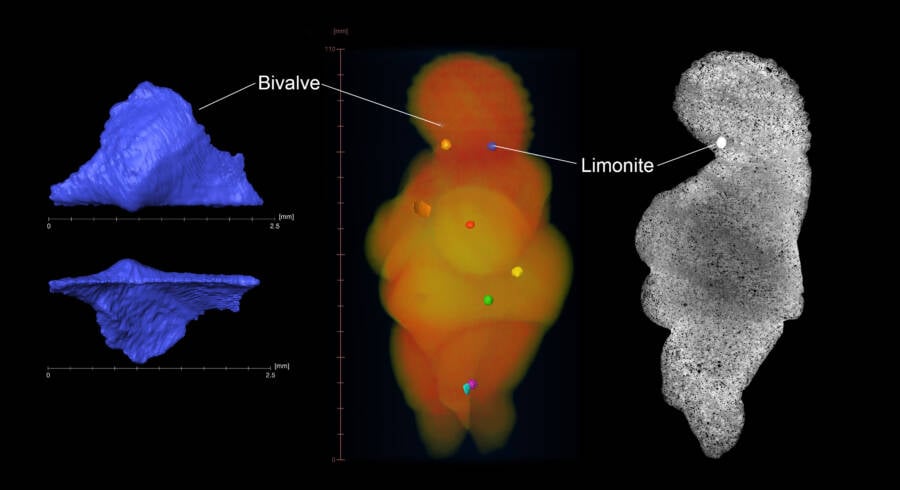 Gerhard Weber/University of ViennaResearchers used high-tech scans to closely examine the statue’s limestone, which they compared to samples taken from across Europe.

“The hard limonites probably broke out when the creator of the Venus was carving it,” Weber said in the University of Vienna statement. “In the case of the Venus navel, he then apparently made it a virtue out of necessity.”

The scans also revealed that the statue’s limestone contained a tiny shell from the Jurassic period. This helped researchers further rule out other possible origins for the Venus of Willendorf materials.

But these new finds also raised an intriguing question. If the Venus of Willendorf’s limestone came from Italy, then how did the statue itself end up hundreds of miles away in Austria?

The Venus Of Willendorf Shows How Far Paleolithic Humans Traveled

The discovery of the statue’s origins has opened a new door into research surrounding how Paleolithic humans traveled. The Alps were covered in glaciers 30,000 years ago when the sculpture was carved, so its creator would have had to travel around the mountain range to reach Austria.

“People in the Gravettian – the tool culture of the time – looked for and inhabited favorable locations,” Weber explained in the University of Vienna statement, noting that migrations could take generations. “When the climate or the prey situation changed, they moved on, preferably along rivers.”

Scientists have long been aware that humans moved around during the Ice Age, but in researching the Venus of Willendorf, they’ve discovered just how remarkably far they traveled. 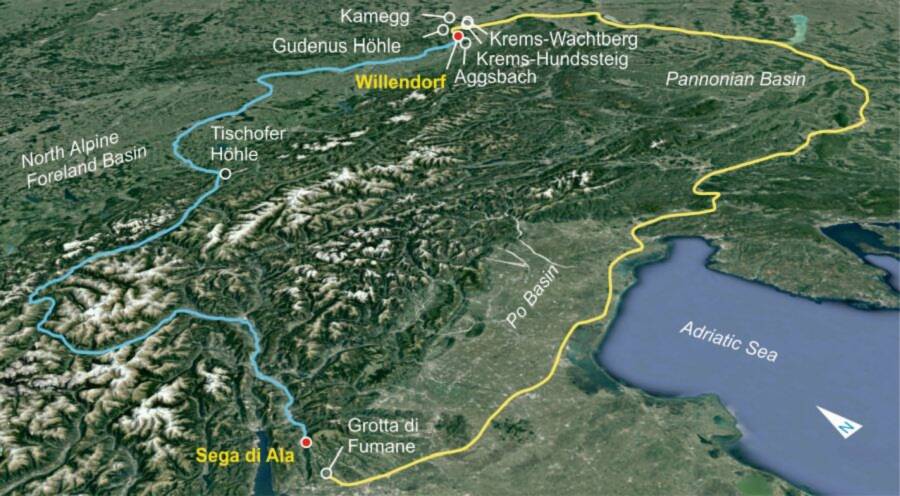 Gerhard Weber/University of ViennaAn explanation of how the Venus of Willendorf was possibly carried from Italy to Austria tens of thousands of years ago.

As such, the scans of the Venus of Willendorf statue have offered some answers — but also raised new questions. The statue probably came from Italy, but it remains possible that it originated in eastern Europe, where a limestone sample from eastern Ukraine also appeared to be a close match.

“The samples there do not fit as clearly as those from Italy, but better than all the rest of the sample,” the researchers explained in the University of Vienna statement.

They added: “An interesting connection here: Venus figures were found in nearby southern Russia, which are somewhat younger, but look very similar to the Venus found in Austria. Genetic results also show that people in Central and Eastern Europe were connected to one another at this time.”

“We want to use these Venus results and our new Vienna research network ‘Human Evolution and Archaeological Sciences,’ in cooperation with anthropology, archaeology, and other disciplines, to further clarify early history in the Alpine region,” Weber said.

In other words, as Weber and other researchers said in their statement, “The exciting story of the Lower Austrian Venus could be continued.”

After reading about the surprising origins of the Venus of Willendorf statue, look through these facts about the Statue of Liberty or discover the story behind the statue of Zeus at Olympia, one of the seven wonders of the ancient world.