How Did Joseph Stalin Die? Inside The Murky Death Of The Soviet Dictator

Joseph Stalin died on March 5, 1953, after apparently suffering a stroke — but some suspect that he was actually poisoned.

Joseph Stalin’s death in March 1953 ended his long and brutal reign as leader of the Soviet Union. Since the 1920s, he’d ruled with an iron fist. He dragged his country toward industrialization at any cost and massacred his enemies — and perceived enemies — causing the deaths of an estimated 20 million people. But how did Stalin die?

The dictator’s death was a long, drawn-out affair. After he fell unconscious on March 1, 1953, his servants and advisors dawdled, unsure what to do without his direction. They eventually called in doctors, but even the physicians feared upsetting the dictator. Stalin’s condition slowly worsened over four days as doctors treated him with leeches and cold compresses.

Finally, Joseph Stalin died on March 5. But while the official cause of death for Joseph Stalin is listed as a cerebral hemorrhage, some suspect that he was actually poisoned by one or more of his advisors who wanted to undo his policies or reform the Soviet Union. 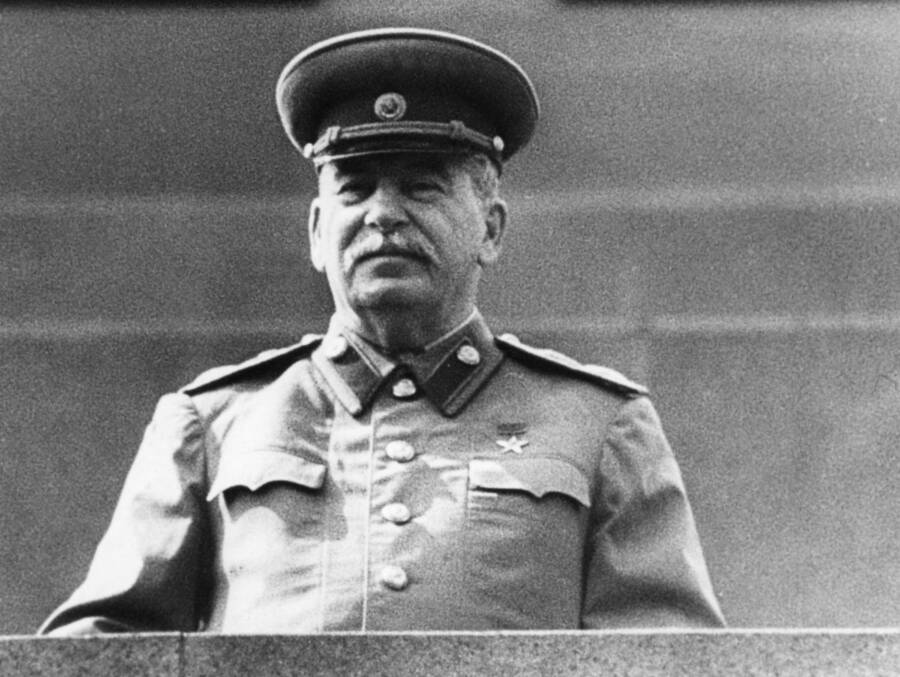 Sovfoto/Universal Images Group via Getty Images Joseph Stalin in 1952, the year before he died.

Indeed, Stalin’s legacy crumbled under successors like Nikita Khrushchev, who promptly instituted a policy of “de-Stalinization.” Since then, the passage of time has made Stalin’s cause of death even harder to discern.

Did he truly die of a stroke at the age of 74? Or was something more sinister at play?

From Ioseb Besarionis dze Jughashvili To The “Man Of Steel” 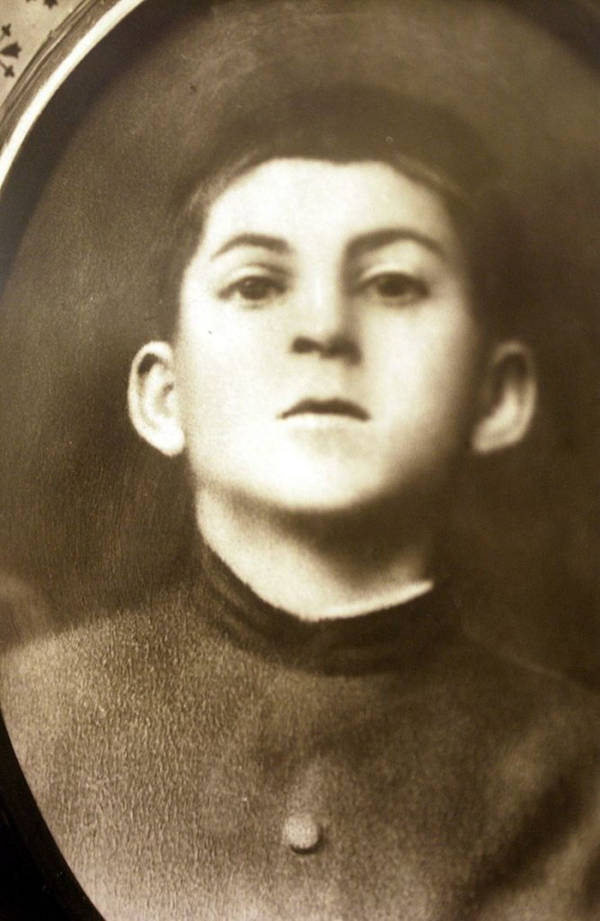 He grew up as an insecure, angry child. His face pockmarked from smallpox, he’d suffered as a boy, and his left arm was somewhat deformed from a carriage accident. Dze Jughashvili also suffered under the thumb of his father, a violent alcoholic who regularly beat his wife and son.

In the end, he found the key to his greatness — and infamy — in a surprising place. Enrolled at Tiflis Theological Seminary, dze Jughashvili started to read Karl Marx. He found inspiration in Marx’s message and dropped out of seminary in 1899 to become a revolutionary.

Dze Jughashvili organized strikes and labor demonstrations, joined the Bolshevik Party, and met with Vladimir Lenin. Before long, he changed his name to Joseph Stalin — man of steel.

As the Bolsheviks rose in power, so did Stalin. When Lenin took control in the Russian Revolution in 1917, Stalin became the General Secretary of the Communist Party. And when Lenin died in 1924, the young man from Georgia triumphed in the power vacuum he’d left behind.

Determined to industrialize his country, Joseph Stalin ruled over the Soviet Union with an iron fist. Over the next three decades, he unleashed a series of five-year plans with lofty — some would say impossible — goals, threw dissidents in the Gulag, and instituted the Great Purge to eliminate anyone he perceived to be a threat. 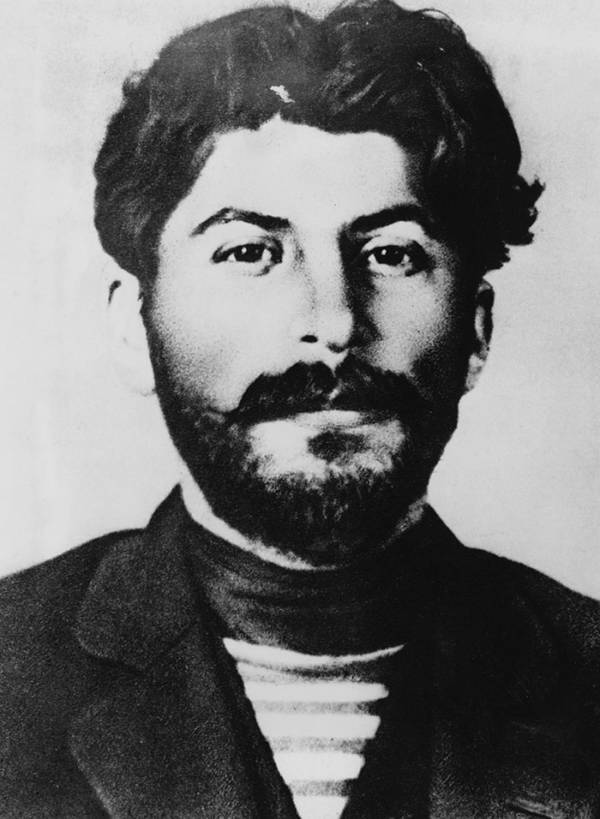 Hulton Archive/Getty ImagesJoseph Stalin in 1911, shortly after he changed his name.

By the 1950s, Stalin had steered his country through World War II and dropped an “Iron Curtain” between Eastern and Western Europe. And by 1953, some began to fear that he was gearing up to launch a new purge — or even start a new war.

That January, he ordered the arrest of many Kremlin doctors, most of them Jewish, and accused them of murdering Soviet leaders. In February, he also ordered the construction of four new prison camps.

But if the Soviet dictator had started plotting more violence, he never saw it in action. Joseph Stalin died that March. And while Stalin’s official cause of death was a stroke, some find the timing of his demise suspicious.

How Did Joseph Stalin Die?

On Feb. 28, 1953, a few days before Joseph Stalin died, the dictator called a number of his advisors to his personal residence, a country house southeast of Moscow known as the Kuntsevo Dacha. Georgy Malenkov, his deputy premier; Lavrentiy Beria, the chief of the secret police; Nikita Khrushchev, the first secretary of the Moscow Regional Committee; and Nikolai Bulganin, Stalin’s defense minister, agreed to come to the house. 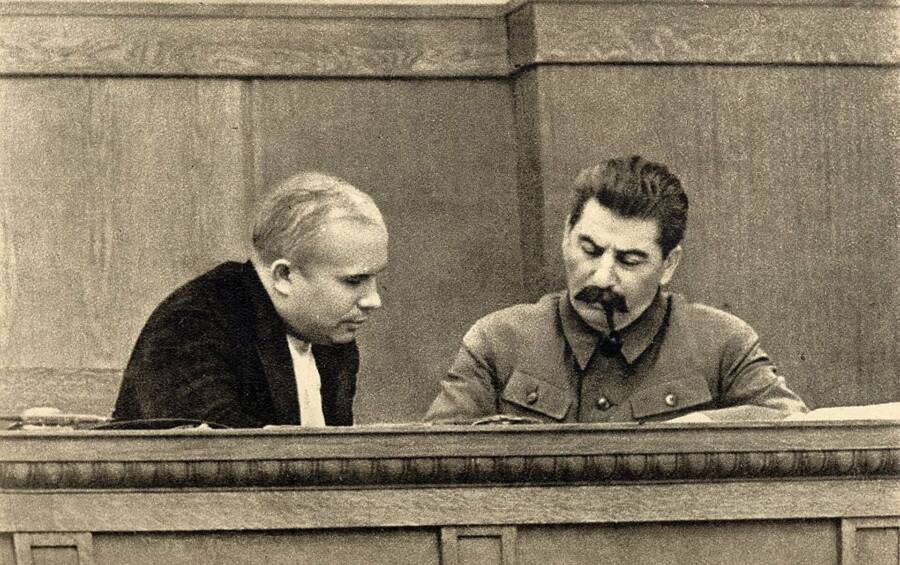 “As soon as [Stalin] woke up, he would ring us — the four of us — and either invite us to see a film or start some long conversation about a question that could have been resolved in two minutes,” Khrushchev later explained.

As such, nothing was unusual about this occasion. The men watched a movie, sat down for dinner, and discussed ongoing interrogations. They stayed up late drinking and left in the wee hours of the morning on March 1.

“We said goodbye to Comrade Stalin and departed,” Khrushchev recalled. “I remember that when we were in the entrance hall Stalin came out as usual to see us off… Well, we left in good spirits… since nothing had happened during the dinner. Those dinners did not always end on a happy note.”

But though Khrushchev waited the following day for another invitation, his phone never rang.

In fact, no one checked on Joseph Stalin that entire day. No one knew that the dictator had gotten up at some point and, struck by an apparent stoke, fallen to the ground. There he stayed until 10:30 p.m. when a servant entered the room and found him sprawled on the floor in a puddle of urine.

Stalin’s servants moved him to a couch and covered him with a rug. But instead of calling a doctor, they called in his advisors at around 1 a.m. on March 2.

Khrushchev claims that he and others went to the residence but didn’t see Stalin. Possibly fearing his reaction when he woke up, they said they didn’t think it was “suitable” when the dictator was in “such an unpresentable condition.”

Other testimony, however, suggests that at least Beria saw Stalin. According to one of Stalin’s guards, Beria demanded, “[Why] are you in such a panic? Can’t you see, Comrade Stalin is sleeping soundly. Don’t disturb him and stop alarming us.” 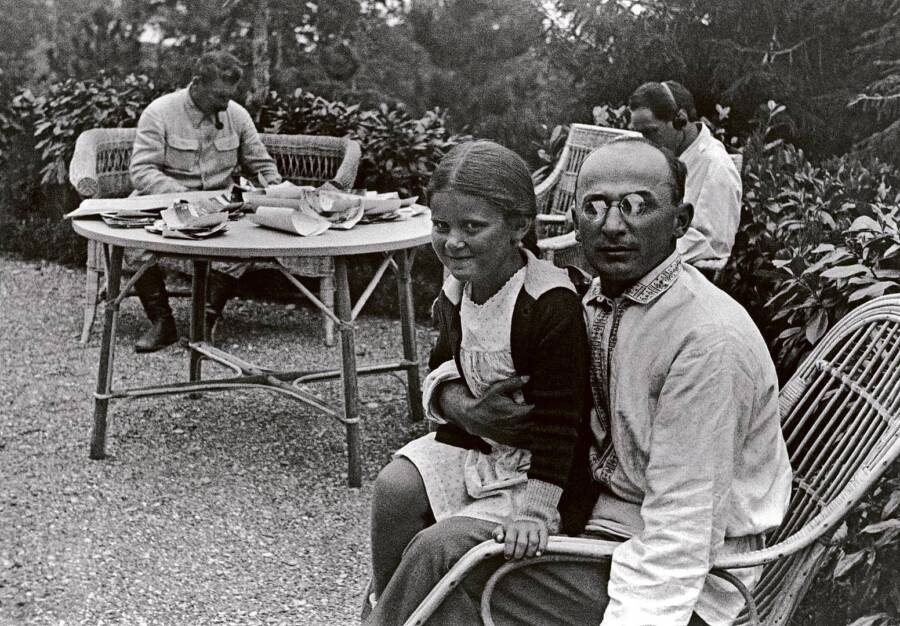 Public DomainLavrenti Beria, with Stalin in the background, and Stalin’s daughter Svetlana on his lap.

Either way, the four men left — only to return a few hours later when Stalin had still not woken up. By that point, he’d slipped into an “unusual kind of sleep.”

Though Stalin’s advisors called in doctors, Stalin himself had previously had many of his personal physicians arrested. Thus, as he lay dying, the dictator was treated by doctors unfamiliar with his health.

“They had to examine him, but their hands were too shaky,” remembered one of Stalin’s guards. “To make it worse, the dentist took out his dentures, and dropped them by accident.”

They treated the dictator with leeches, cold compresses, and absolute silence. But he never woke up. Joseph Stalin died on March 5, 1953, at around 9:50 p.m.

But how did Stalin die? Did he suffer a stroke at the ripe age of 74? For decades, historians have grappled over that question. And some have come to the conclusion that Stalin was, in fact, poisoned by one of the four men in his inner circle.

After Joseph Stalin’s death, Nikita Khrushchev seized power. He swiftly washed his hands of his former boss, telling an audience at the Twentieth Communist Party Congress in 1956 that Stalin had been a “despot” with an unhealthy “cult of personality.”

Stalin had used “repression and physical annihilation,” Khrushchev told his fellow communists. “Not only against actual enemies, but also against individuals who had not committed any crimes against the party and the Soviet Government.” 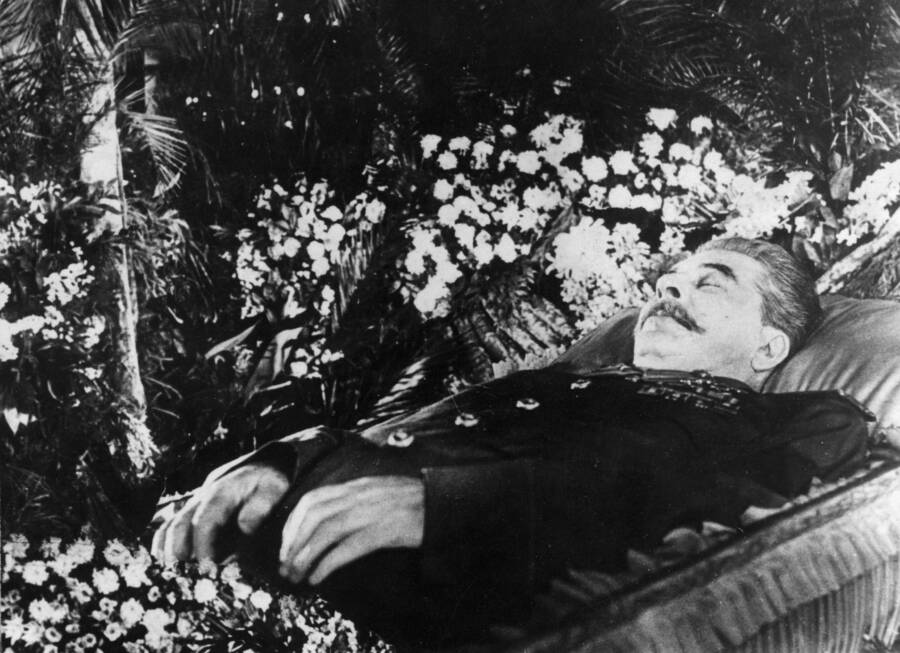 As part of Khrushchev’s policy of “de-Stalinization,” Stalin’s body was even removed from Lenin’s tomb and reburied next to the Kremlin wall.

And in the ensuing years, his life and rule were judged and largely condemned. But what about Stalin’s death? Is it possible that someone poisoned the dictator?

There is some evidence that Stalin died from poison. For starters, the official account of Stalin’s death, given to the Communist Party Central Committee in June 1953 and long-kept secret, omits a couple of important details. It claims that Stain suffered a stroke on March 2, not March 1. And it neglects to describe how, on March 5, Stalin vomited blood.

The fudged date could have meant to spare Stalin’s advisors from questions about why they didn’t act more quickly. But poison could have caused stomach hemorrhaging that preceded Joseph Stalin’s death.

Indeed, Western doctors who examined the report — which claimed Stalin’s cause of death was cerebral hemorrhaging — thought poison could have caused his symptoms. They speculated that someone could have dosed the dictator with a five or 10-day regimen of warfarin, a blood thinner.

Even Khrushchev hinted that Stalin had been poisoned. In his 1970 memoir, Khrushchev Remembers, he claimed that Beria told another top advisor, “I did him in! I saved all of you.” But Khrushchev’s account is largely seen as politically biased against Beria.

So, how did Joseph Stalin die? We may never know for sure.

Maybe he died of a stroke. Or maybe his advisors, worried that he’d start another purge or even a war with the United States, took matters into their own hands. Maybe one or all of them slipped blood thinners into his diluted Georgian wine — and simply waited.

After reading about how Joseph Stalin died, discover the tragic story of his son Vasily Stalin. Then, look through these vintage Soviet propaganda posters.