A Romanian-born British intelligence officer during World War II, Vera Atkins usually showed little emotion and was known for being tough, as well as caring, about her recruits.

She took on many roles as a spy, including recruiting, training, and planning secret operations in France — and managed to decipher coded German messages that no one else could. Indeed, her exploits were so impressive that they later inspired writer Ian Fleming, who based the fictional character “M” on Atkins in his James Bond novels.

But Atkins was also known for the tenderness and respect that she showed her agents. When 118 of them remained missing after the war, Atkins went to work finding them — and located nearly every last one.

This is her unbelievable true story.

How Vera Atkins Became A Spymaster 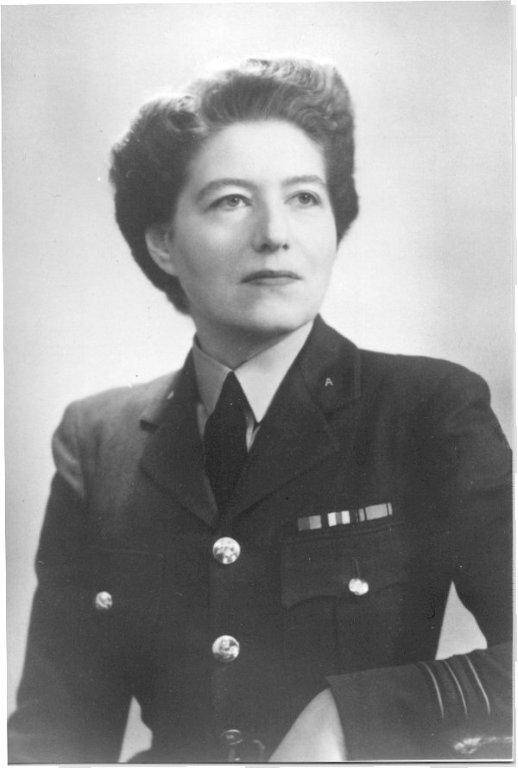 St. Tammany LibraryVera Atkins later received the Croix de Guerre in 1948 and was made a Knight of the Legion of Honor by the French government in 1995.

Vera Atkins was born in Romania in 1908 to a father of German-Jewish heritage and a British mother. In her earlier years, Atkins lived on a large estate in Bucharest. She attended school in Paris where she studied modern languages and then trained at a secretarial college in London. Atkins never married and had no children.

But it was back in cosmopolitan Bucharest where Atkins came into contact with various diplomats, including an anti-Nazi German ambassador to Romania, who launched her on her path of espionage. The diplomats she met later also supported her when she applied for British citizenship.

Atkins remained in Romania working as a translator at an oil company until 1937, when she emigrated to Britain because the political climate in late 1930s Romania had become dramatically more fascist and antisemitic. 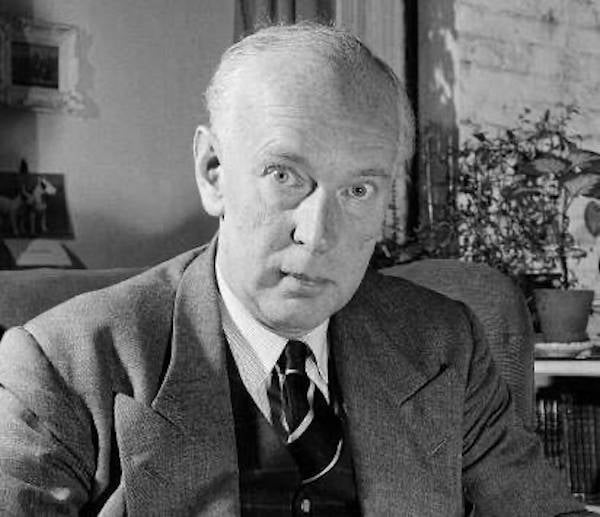 Getty ImagesColonel Maurice Buckmaster of the Special Operations Executive, who worked closely alongside Atkins as her director.

When the German Army invaded France in 1940, Atkins found a place for herself in the fight against Nazism when she joined the French branch of the Special Operations Executive (SOE), an underground resistance group that was part of British intelligence.

Even though Atkins was employed as a secretary at first, she quickly moved up the ranks — and became the head intelligence officer for the French division, second only to her boss, Colonel Maurice Buckmaster.

Her Invaluable Work With The SOE

Vera Atkins was tasked with recruiting and sending undercover agents, couriers, and wireless operators into France. She interviewed potential agents in sparse hotel rooms, warned them of the dangers involved in their work, and told them that survival rates were only 50 percent.

Extreme torture followed by execution, if caught, was likely the final outcome.

After Atkins briefed and accepted new agents, she trained them for operations. This included everything from details about spying to handling of explosives and how to live in France without drawing suspicions.

Recruits came from all areas of society, men and women, from lower to upper class members. They included taxi drivers and writers, but what they all had in common was fluency in French and fearlessness. 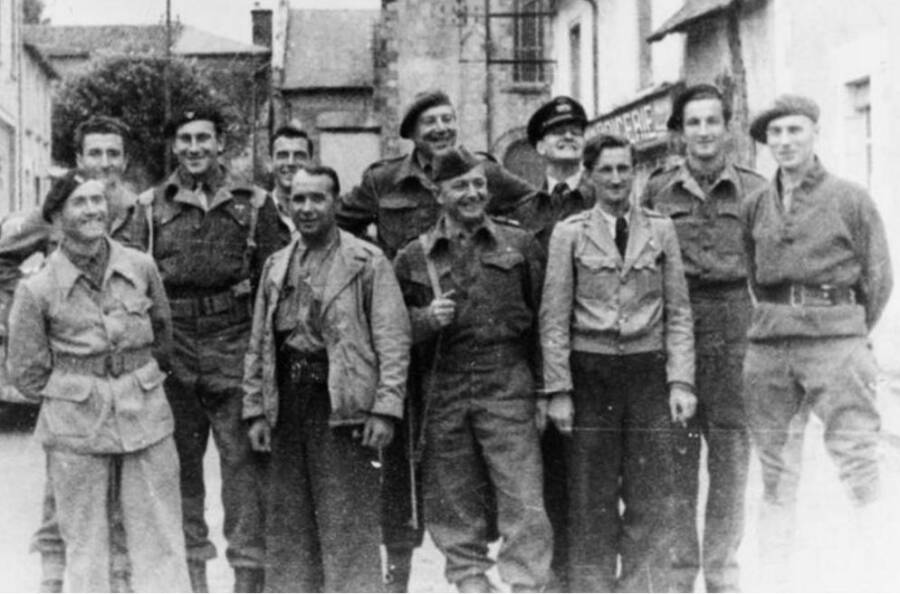 Wikimedia CommonsSOE agents, like the ones Atkins would have recruited, in southern France in 1944.

At the end of training, Atkins called recruits in for “tea” with her. There, she gave them their mission and identity papers. Every agent was escorted by Atkins herself to the secret airfield where she watched them leave Britain, often for the final time.

Vera Atkins sent off more than 400 agents this way. Over a quarter of them never returned. She once said of them, “Ordinary people sometimes reveal quite unexpected strengths. These people had no doubts about the importance of defeating Nazism. They undertook risks feeling it was a duty; they made a voluntary sacrifice.”

The End Of The SOE And Inspiring ‘James Bond’s’ Moneypenny

Atkins worked with the SOE until the end of the war. Even though Winston Churchill strongly supported the organization, when he was replaced as prime minister in 1945, it was disbanded.

The loss of so many agents during the war haunted Vera Atkins for years. “I could not just abandon their memory,” she later said. By the time the SOE was disbanded, 118 of her agents were missing.

Filled with guilt, Atkins ensured their families that all lost agents would eventually receive official recognition from the British government, and she managed to trace what happened to all but one of them.

She discovered that at least four captured agents were burned to death. Atkins rarely talked about the horrors she had learned. 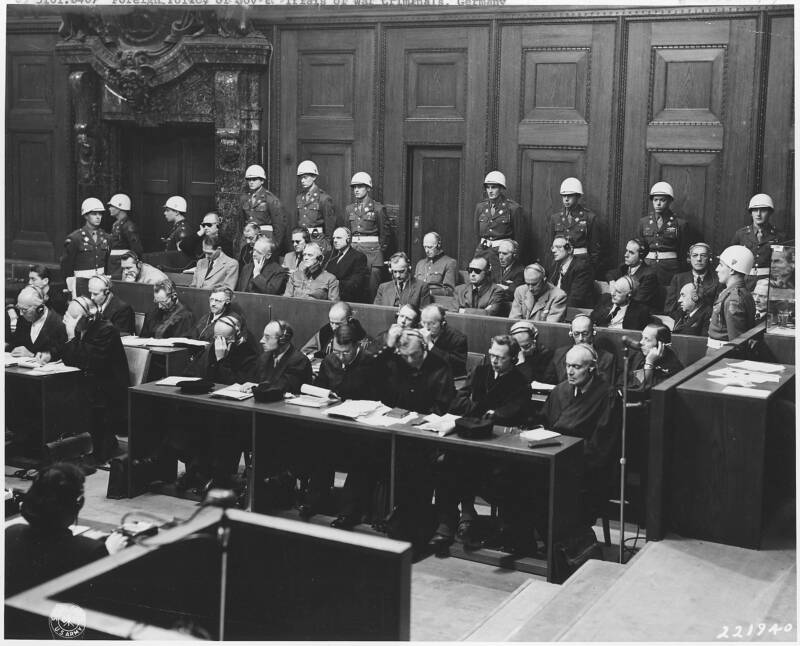 Wikimedia CommonsAtkins made sure to bring any Nazi officials who killed her agents to justice, as in the war crimes tribunal pictured here.

In the early 1950s, author Ian Fleming began publishing his James Bond series, which featured a character named “M” and his secretary, Miss Moneypenny. It is believe that both characters were heavily inspired by Atkins and her boss, Maurice Buckmaster.

Fleming was both a journalist and British naval intelligence officer during World War II. He came into contact with a number of people involved in espionage that eventually turned up in his fiction, including Atkins, whom he knew well.

Fleming reportedly admired much about Atkins, including her strong character and adoration for her agents. These were two features given to Miss Moneypenny.

On June 24, 2000, Vera Atkins died in Hastings, United Kingdom, having led an army of fearless agents for good and inspired a legion of fans worldwide.

After this look at Vera Atkins, the real-life inspiration for James Bond’s recruiter, learn about more women of espionage, like Virginia Hall. Then, read up on the most dangerous spy for the Nazis, Elyesa Bazna.