The Gruesome Story Of The Unsolved Villisca Axe Murders

On June 10, 1912, all eight people inside the Moore family's house in Villisca, Iowa — including two adults and six children — were murdered by an axe-wielding assailant. 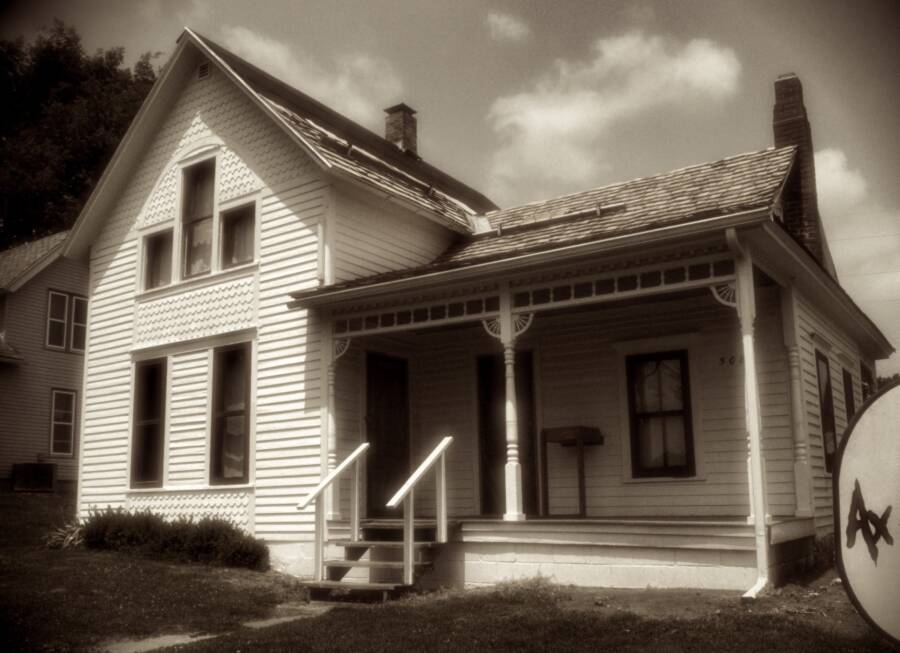 Jo Naylor/FlickrThe Villisca Axe Murders house where an unknown attacker committed one of American history’s most disturbing unsolved murders of all time in 1912.

At the end of a quiet street in Villisca, Iowa, there sits an old white frame house. Up the street, there are a group of churches, and a few blocks away is a park that faces a middle school. The old white house looks like many of the others that fill the neighborhood, but unlike them, it lies abandoned. The house emits no light or sound, and upon closer inspection, the doors are found to be tightly boarded up. A small sign out front reads: “Villisca Axe Murder House.”

Despite its ominous air, the little white house was once filled with life, life that was harshly stamped out one warm summer’s night in 1912, when a mysterious stranger broke in, and viciously bludgeoned its eight sleeping inhabitants to death. The event would come to be known as the Villisca Axe Murders and it would baffle law enforcement for over a century.

The Brutal Story Of How The Villisca Axe Murders Unfolded

On June 10, 1912, the Moore family was sleeping peacefully in their beds. Joe and Sarah Moore were asleep upstairs, while their four children were resting in a room down the hall. In a guest room on the first floor were two girls, the Stillinger sisters, who had come for a sleepover.

Shortly after midnight, a stranger entered through the unlocked door (not an uncommon sight in what was considered a small, safe, friendly town), and plucked an oil lamp from a nearby table, rigging it to burn so low it supplied light for barely one person. On one hand, the stranger held the lamp, lighting the way through the house.

In his other, he held an axe.

Ignoring the sleeping girls downstairs, the stranger made his way up the stairs, guided by the lamp, and a seemingly unerring knowledge of the home’s layout. He crept past the room with the children, and into Mr. and Mrs. Moore’s bedroom. Then he made his way to the children’s room, and finally back down to the bedroom downstairs. In each room, he committed some of the grisliest murders in American history.

Then, as quickly and silently as he had arrived, the stranger left, taking keys from the home, and locking the door behind him. The Villisca Axe Murders may have been quick, but as the world was about to discover, they were unimaginably horrifying.

The Horrors Of The Villisca Murders Come To Light 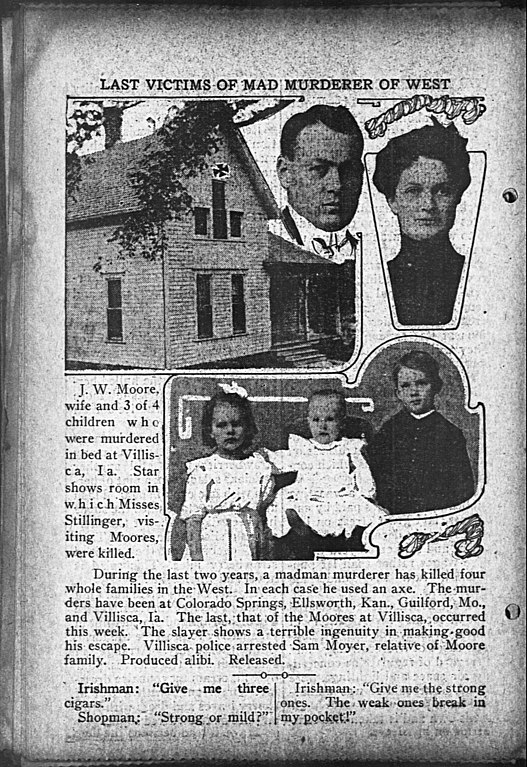 Wikimedia CommonsA contemporaneous article from a Chicago publication on the victims of the Villisca Axe Murders.

The next morning, the neighbors became suspicious, noticing that the usually rambunctious home was dead quiet. They alerted Joe’s brother, who arrived to take a look. What he saw after letting himself in with his own key was enough to make him sick.

Everyone in the house was dead, all eight of them bludgeoned beyond recognition.

The police determined that the Moore parents had been murdered first, and with obvious force. The axe that had been used to kill them had been swung so high above the murderer’s head that it gouged the ceiling above the bed. Joe alone had been hit with the axe at least 30 times. The faces of both parents, as well as the children, had been reduced to nothing but a bloody pulp.

The state of the bodies wasn’t the most concerning part, however, once the police had searched the home.

After murdering the Moores, the killer had apparently set up some kind of ritual. He had covered the Moore parent’s heads with sheets, and the Moore children’s faces with clothing. He then went through each room in the house, covering all of the mirrors and windows with cloths and towels. At some point, he took a two-pound piece of uncooked bacon from the fridge and placed it in the living room, along with a keychain.

A bowl of water was found in the home, spirals of blood swirling through it. Police believed that the murderer had washed his hands in it before leaving. 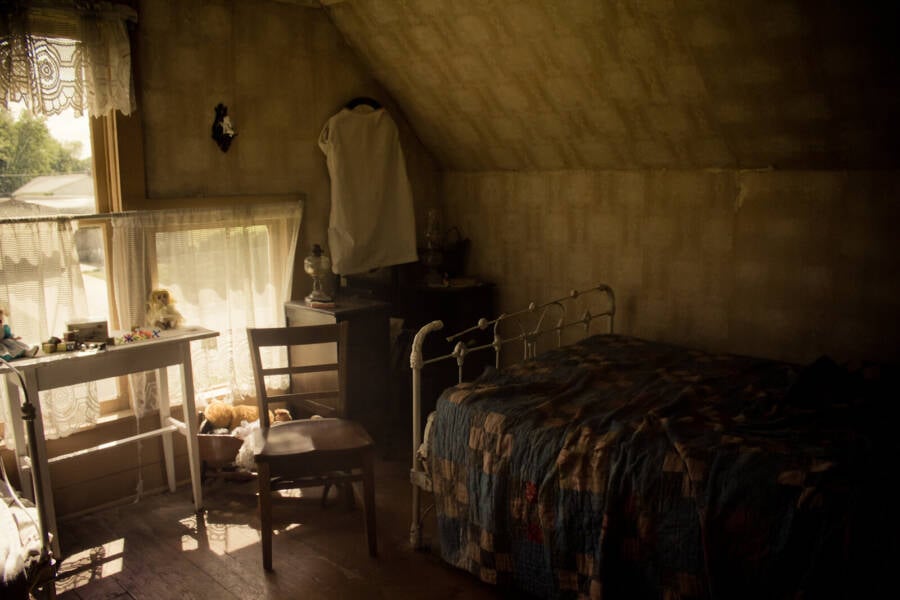 Jennifer Kirkland/FlickrOne of the children’s bedrooms inside the Villisca Axe Murders house.

By the time the police, the coroner, a minister, and several doctors had thoroughly perused the crime scene, word of the vicious crime had spread, and the crowd outside the home had grown. Officials cautioned the townspeople against going inside, but as soon as the premises was clear at least 100 townspeople gave in to their gross fascinations and traipsed through the blood-spattered home.

One of the townspeople even took a fragment of Joe’s skull as a keepsake.

Who Committed The Villisca Axe Murders?

As for the perpetrator of the Villisca Axe Murders, the police had shockingly few leads. A few half-hearted efforts to search the town and surrounding countryside were made, though most officials believed that with the roughly five-hour head start that the killer had had, he would be long gone. Bloodhounds were brought in, but with no success, as the crime scene had been fully demolished by the townspeople.

A few suspects were named over time though none of them panned out. The first was Frank Jones, a local businessman who had been in competition with Joe Moore. Moore had worked for Jones for seven years in the farm equipment sales business before leaving and starting his own rival business.

There was also a rumor that Joe was having an affair with Jones’ daughter-in-law, though the reports were unfounded. The townspeople insist, however, that the Moores and the Joneses harbored a deep hatred for each other, though no one admits it was bad enough to spark murder.

The second suspect seemed far more likely and even confessed to the murders – though he later recanted claiming police brutality. 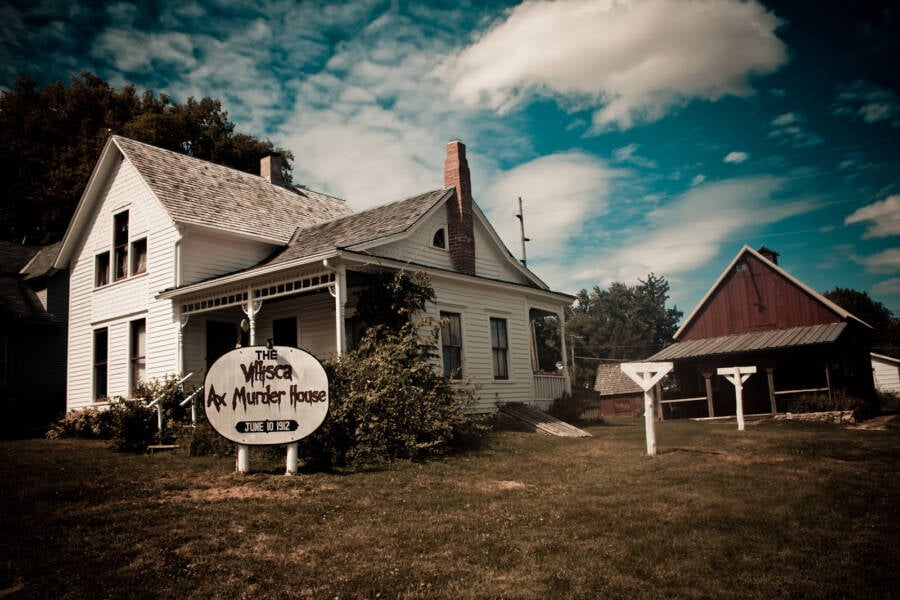 Jennifer Kirkland/FlickrIn recent years, the Villisca Axe Murders house has become a tourist attraction, with visitors even allowed to venture inside.

Lyn George Jacklin Kelly was an English immigrant, who had a history of sexual deviancy and mental problems. He even admitted to being in town the night of the Villisca Axe Murders and admitted that he had left early in the morning. Though his small stature and meek personality led some to doubt his involvement, there were certain factors police believed made him the perfect candidate.

Kelly was left-handed, which police determined from blood spatters that the killer must be. He also had a history with the Moore family, as many had seen him watching them while at church and out and about in town. A dry cleaner in a nearby town had received bloody clothing from Kelly a few days after the murders. He reportedly also asked police for access to the home after the crime while posing as a Scotland Yard officer.

At one point, after a long interrogation, he eventually signed a confession detailing the crime. However he almost immediately recanted, and a jury refused to indict him.

For years, police looked into every possible scenario that could have culminated in the Villisca Axe Murders. Was it a single attack, or part of a larger string of murders? Was it likelier to be a local perpetrator, or a traveling killer, simply passing through town and taking an opportunity?

Soon, reports of similar enough crimes happening throughout the country began to pop up. Though the crimes were not quite as gruesome, there were two common threads – the use of an axe as the murder weapon, and the presence of an oil lamp, set to burn extremely low, at the scene.

Despite the commonalities, however, no actual connections could be made. The case eventually ran cold, and the house was boarded up. No sale was ever attempted, and no changes were made to the original layout. Now, the house has become a tourist attraction and sits at the end of the quiet street as it always has, while life goes on around it, undeterred by the horrors that were once committed within.

After reading about the Villisca Axe Murders, read about another unsolved murder, the Hinterkaifeck murders. Then, check out the history of Lizzie Borden and her infamous string of murders.