Way before diversion could be found at your fingertips, there was the classic circus. The pro to-TLC, it relied on shock and exploitation to draw its crowd. 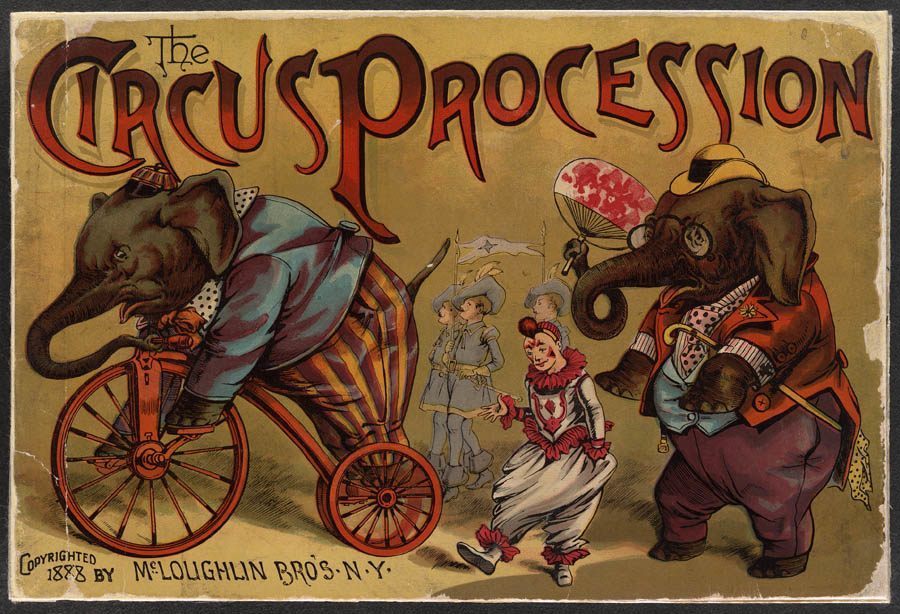 The traveling circus was once such a popular event that families would plan their vacation around it coming to town.

It might seem impossible now, but there was a time–indeed, there were centuries–when entertainment could be found outside of an LCD screen. Before “Angry Birds”, there was the circus, which in many ways was the proto-TLC, as circus execs relied heavily on shock and exploitation to provide people with an escape from the drudgeries of reality–and, of course, make some killer profits for themselves.

Today, the circus is largely anachronistic, evocative of a time in which diversion was not at your fingertips but at a fairground. As with today, though, marketing still mattered: 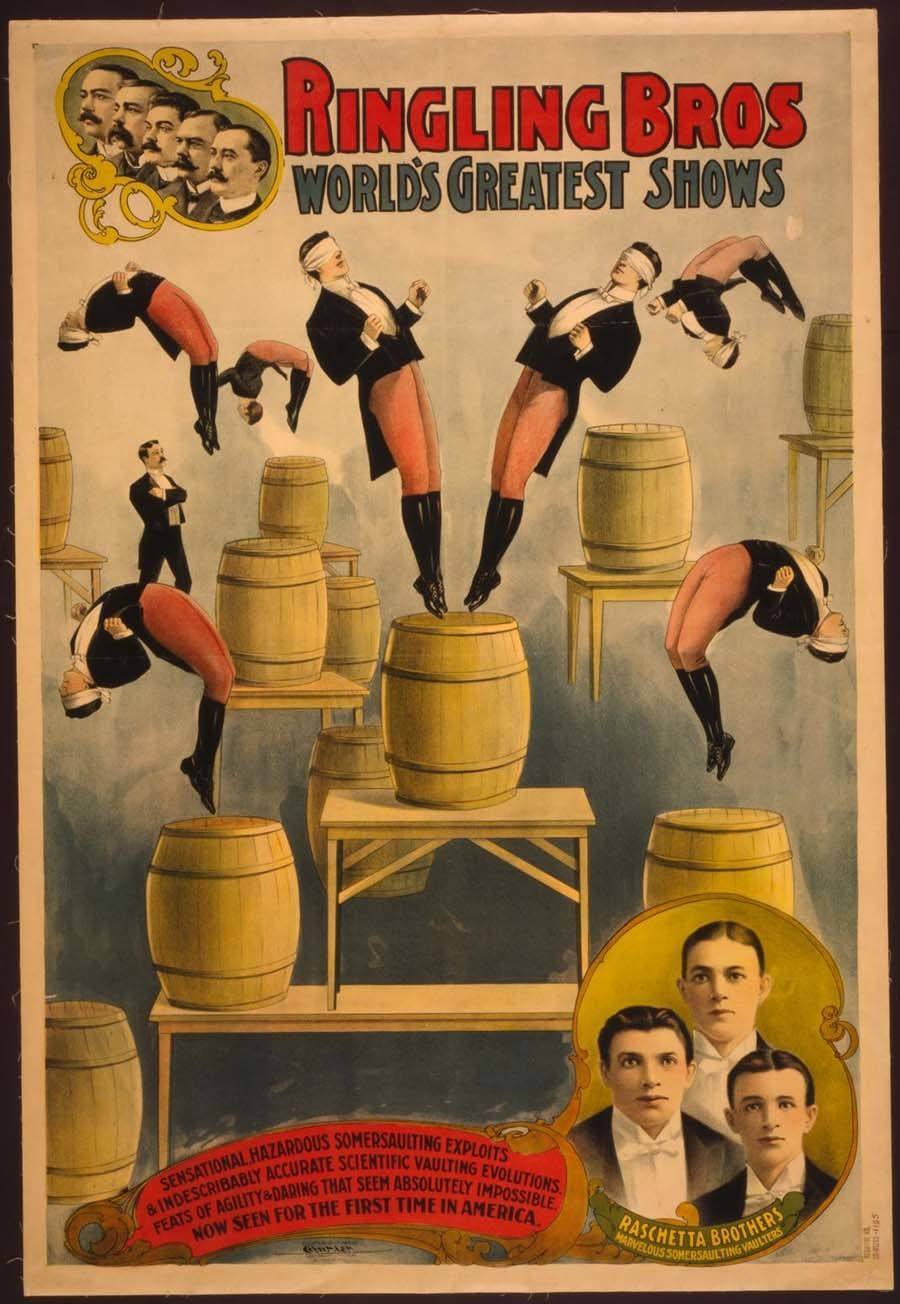 Five of the seven Ringling brothers founded the world-famous Ringling Brothers Circus, which promoted the biggest acts and garnered the entrepreneurial siblings a ton of wealth. wikipedia 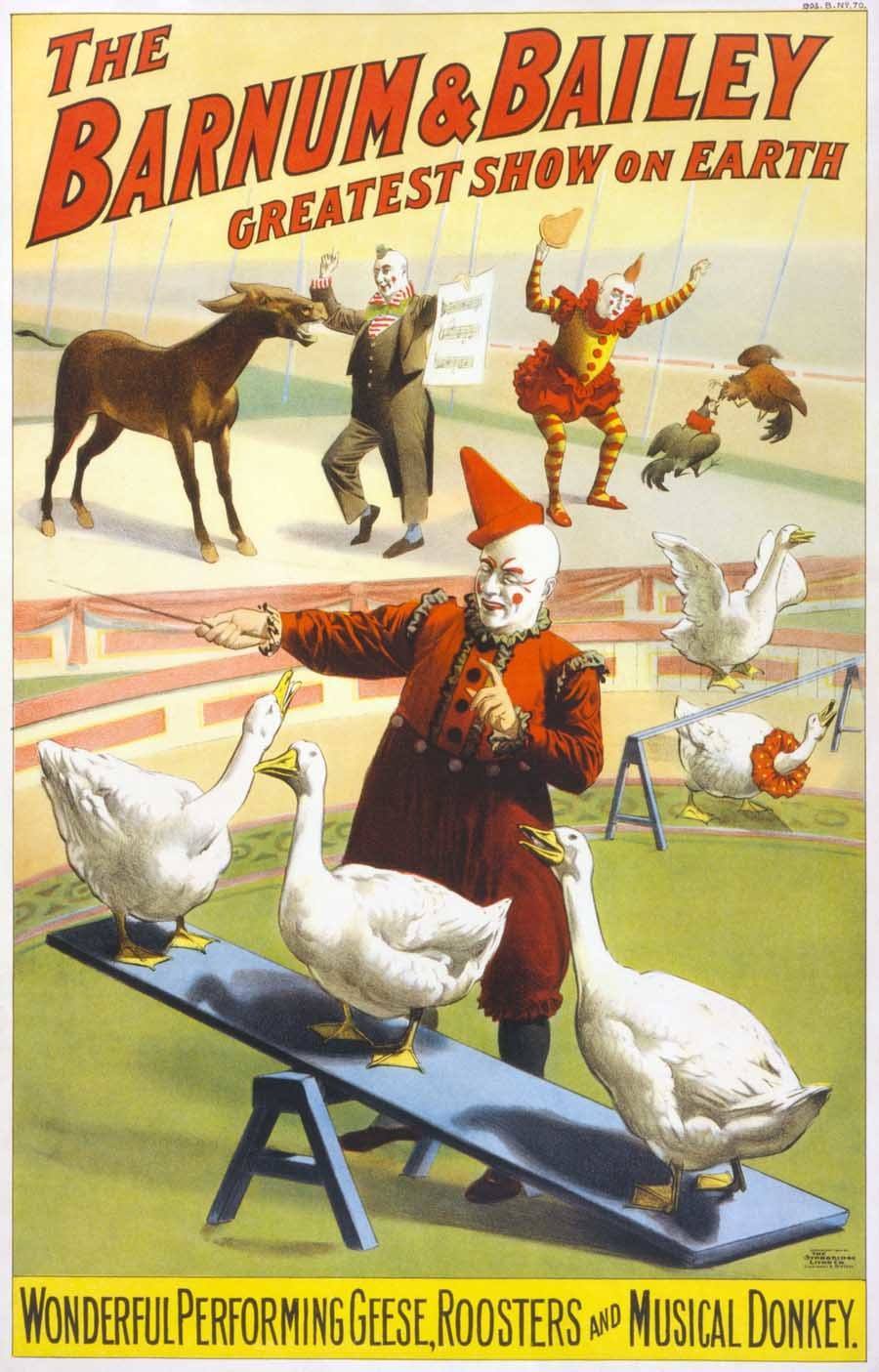 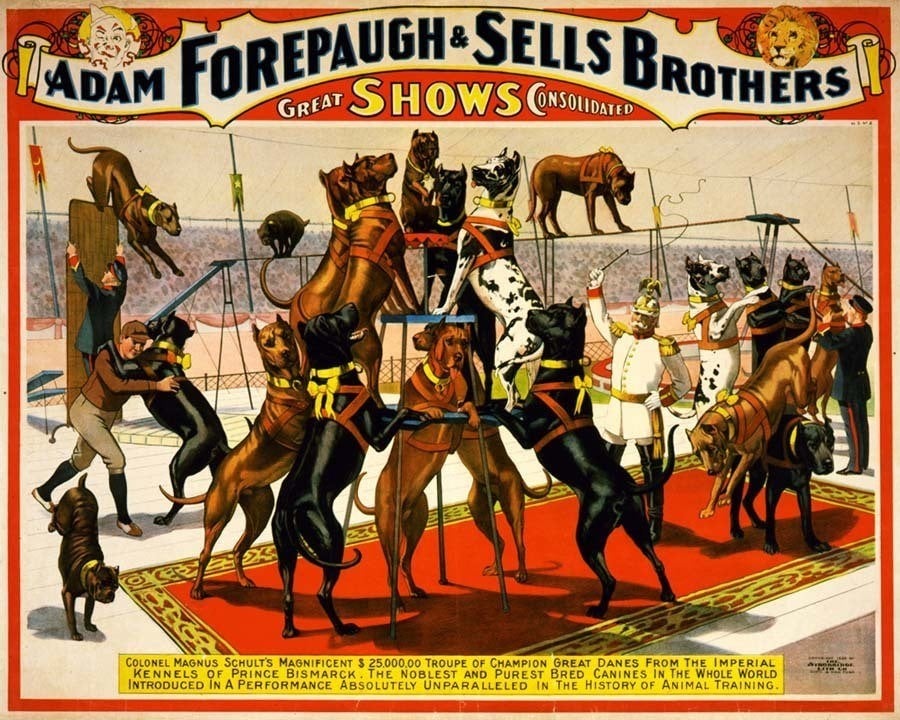 Before Adam Forepaugh and the Sells Brothers combined their shows, their separate acts were quite successful. As with the Ringling Brothers' acquisition of Barnum, it was very common for one circus to purchase a rival or two to join as a way to increase revenue by lessening competition. wikipedia 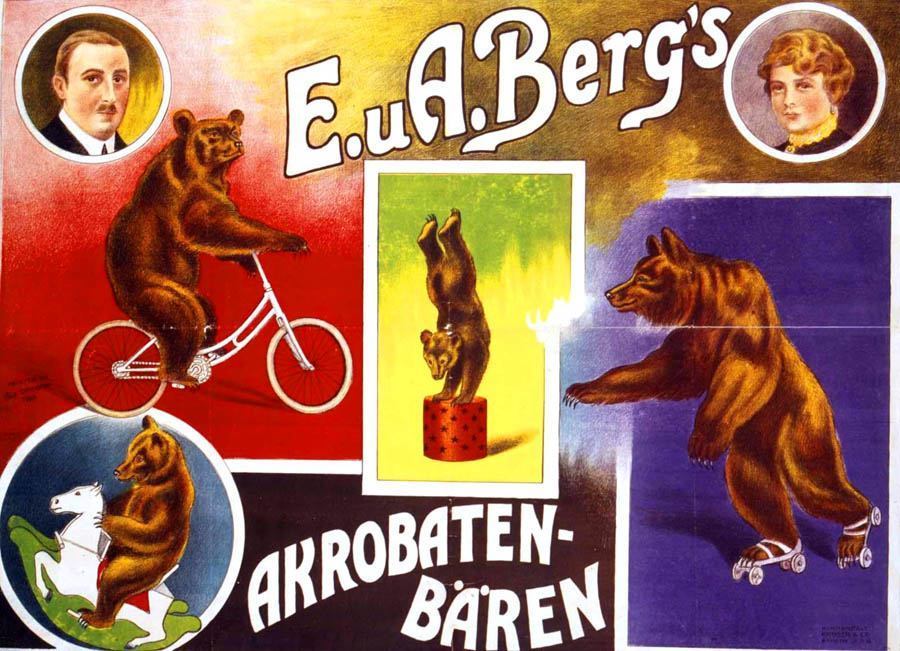 It wasn’t only American circuses that used colorful posters and animal acts to promote themselves. This poster from a French circus features one very dextrous bear. imgkid 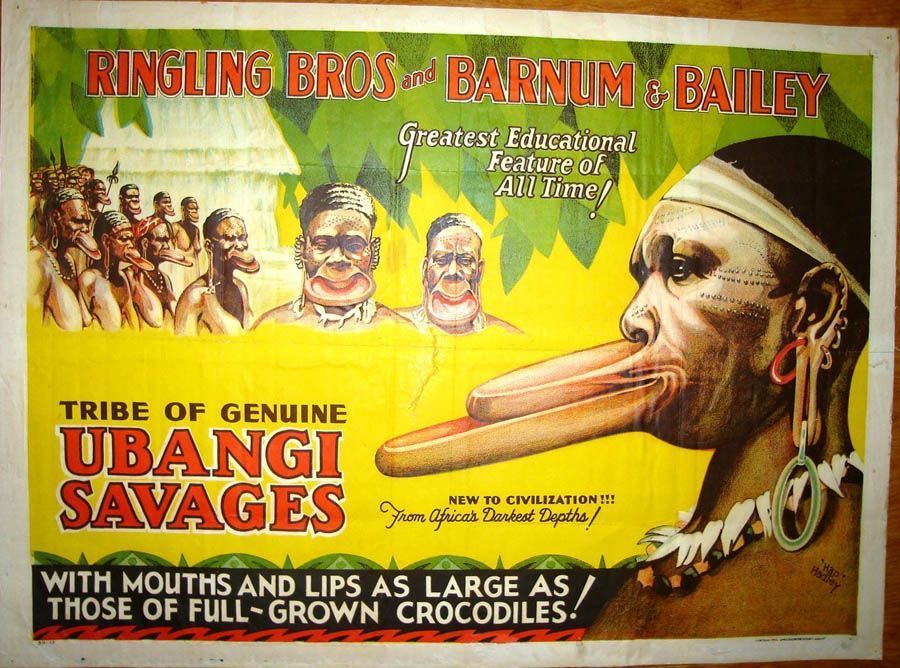 Somewhat similar to today's reality TV shows, many acts in the classic circus used exploitation as a means of entertainment. Shock sells, and the circus could bring spectacle to scale like few others could. One step above slavery, so called “savages” would be brought from their homelands to sell tickets to the masses. circusposters 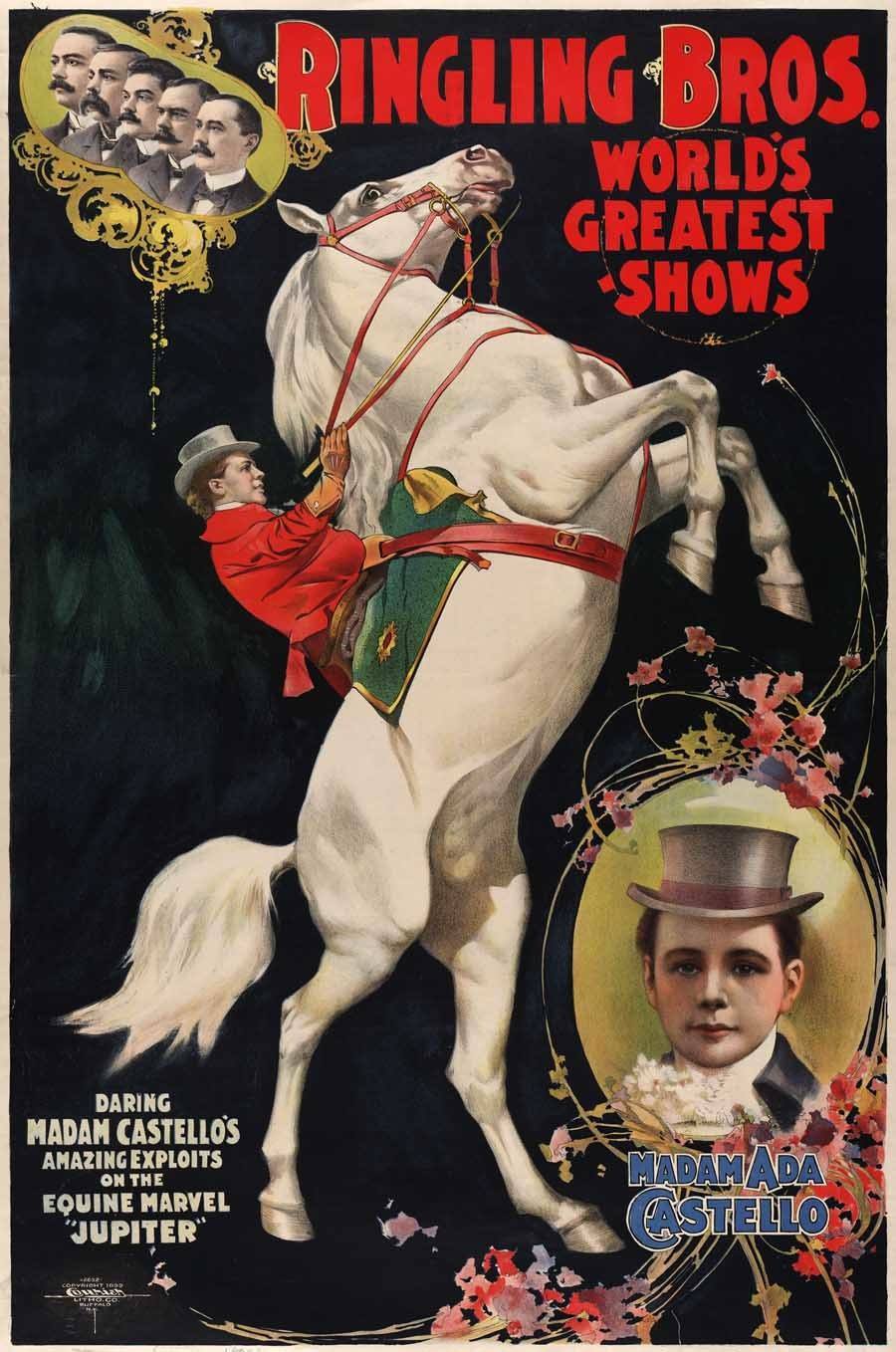 Madam Ada Costello was a very popular horse act for the Ringling Bros. Only the biggest attractions received their own posters for the coming shows wikipedia 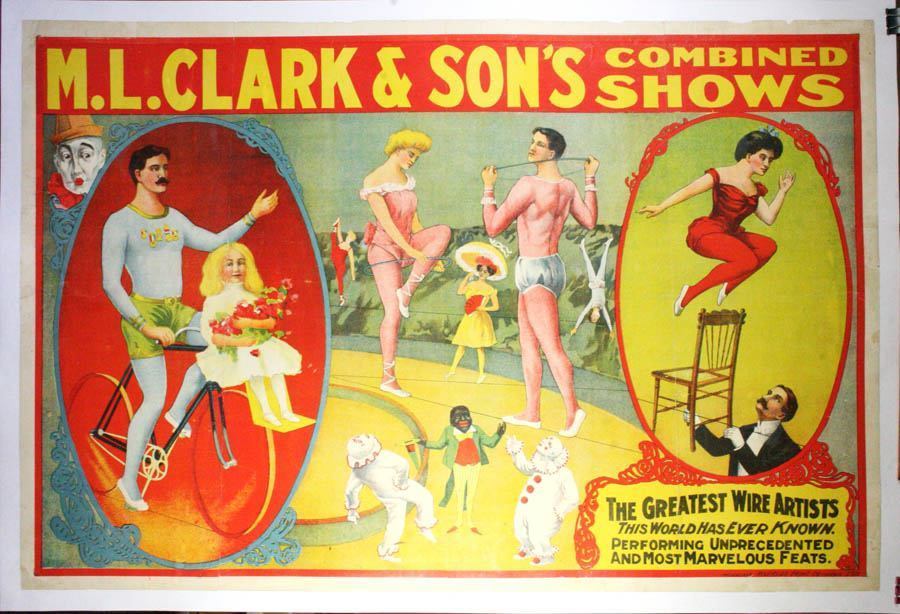 M.L. Clark and Sons were known for their expert wire artists. A family of daredevils, the members saw the wire as their canvas and were always looking for new tricks that would provide for an exciting final product. imgkid 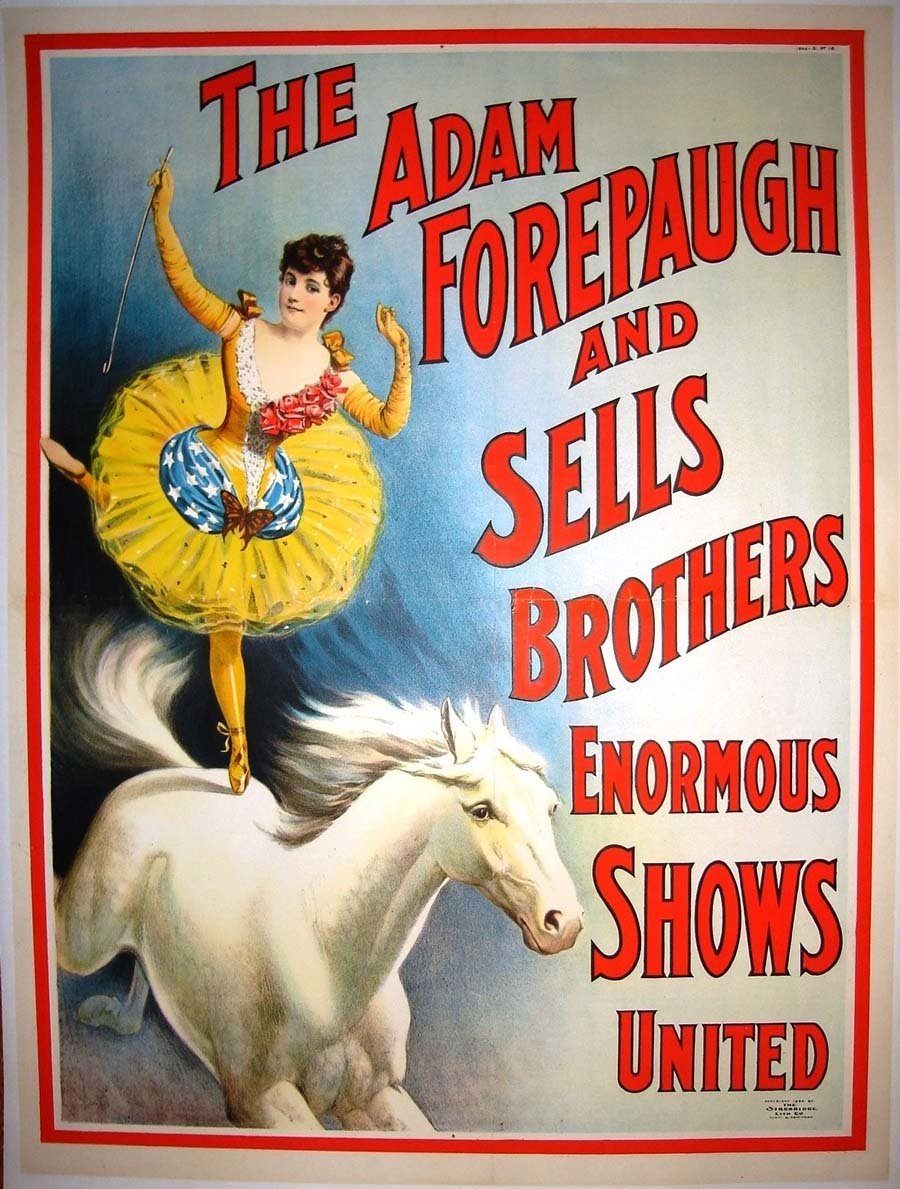 Others still wanted to seize on the circus' national popularity. One was the Adam Forepaugh and Sells Brothers Circus, which operated from 1896 through 1911. One of their biggest acts featured Great Danes, which were unfamiliar in the United States at the time. circusposters 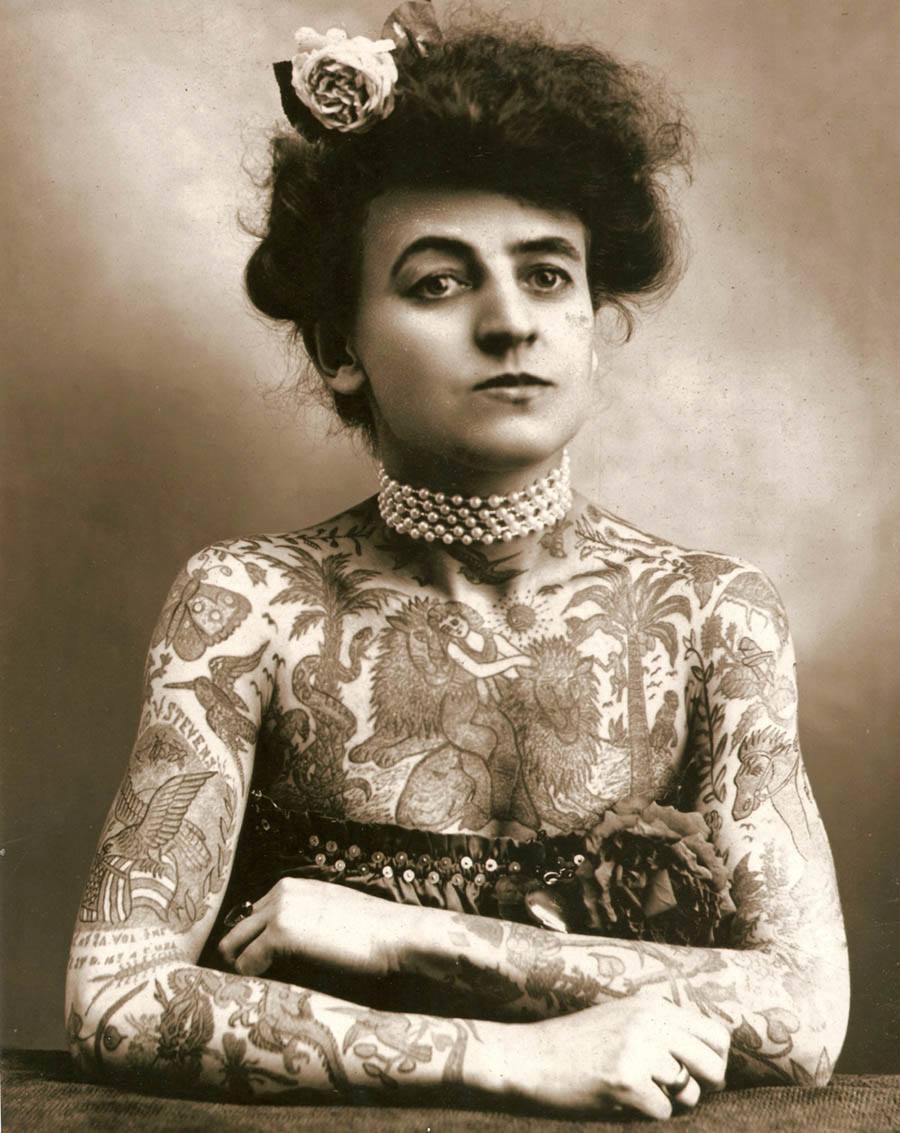 Few ‘freak show’ attractions were more popular than the Tattooed Woman. Nora Hildebrandt was America’s first professional tattooed lady, but over time the art would become normalized, and Hildebrandt would be considered less of a "freak" and more of a trendsetter. Maud Wagner (shown here) was a circus artist as well as America’s first female tattoo artist. lastsparrowtattoo 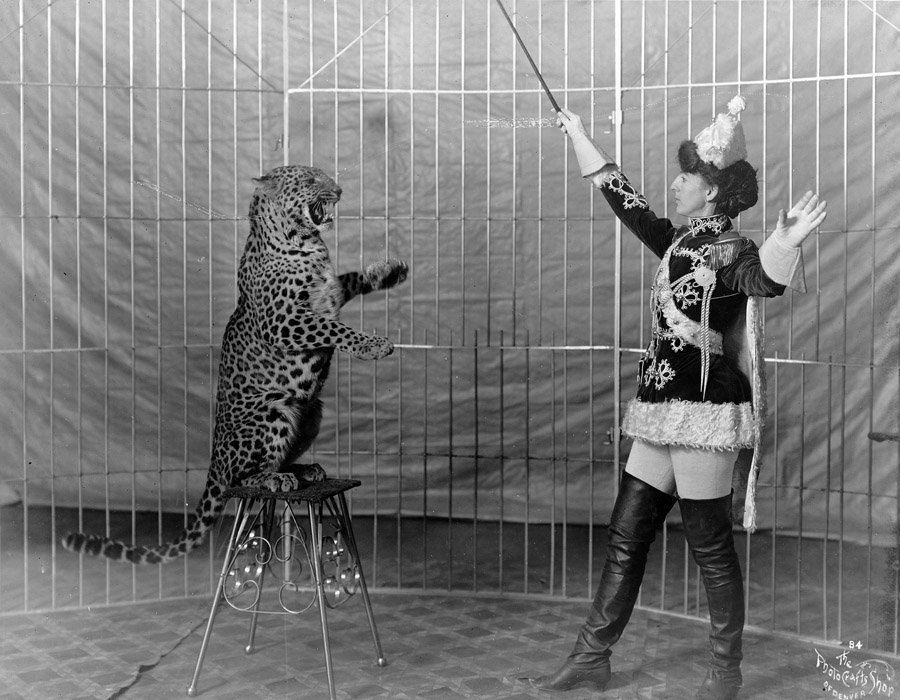 Animal tamers were all the rage under the Big Top, and a female tiger tamer would surely bring in the biggest crowds. wikipedia 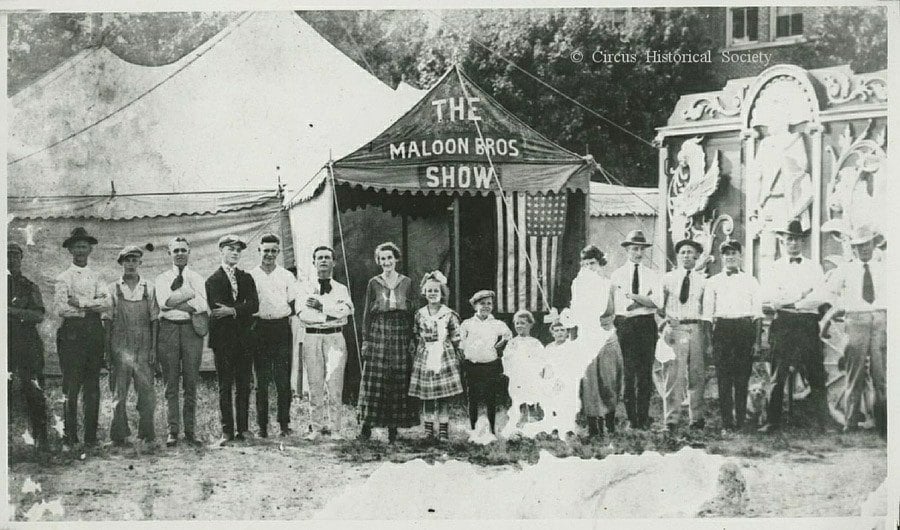 The Maloon Brothers Circus operated off and on from 1913 to 1921, and had a rocky go of it from the very start. An excerpt from a 1913 Billboard Magazine states “A rumor is out that Maloon Bros.' show disbanded at Union City, Indiana, June 24, and it is alleged that Manager Carlton Maloon vamoosed with two weeks' salary of the troupe and a week's door receipts, amounting to somewhere in the neighborhood of $500.” Carlton must have shown back up eventually, as this particular troupe was around for seven years afterward. circus history 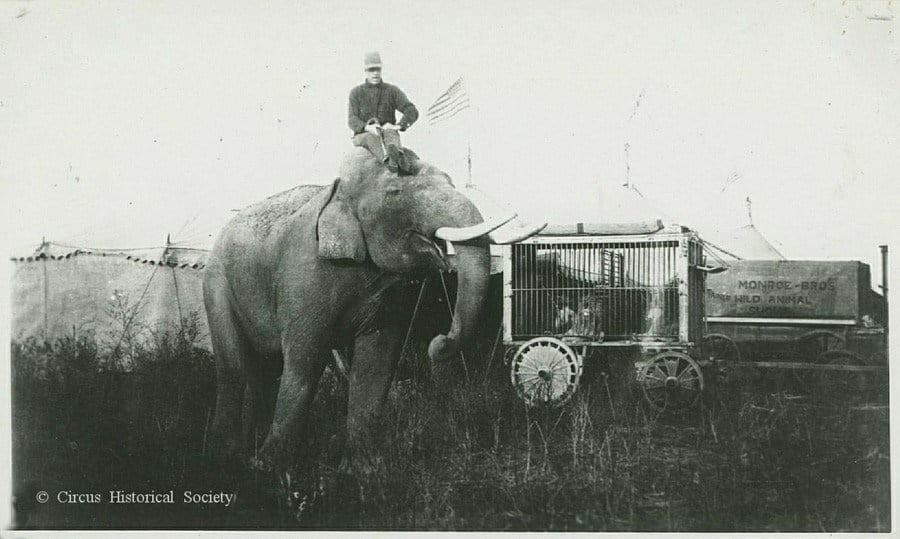 Given their imposing size and exoticness, elephants were typically one of the biggest draws in a traveling circus. Many tragic stories surround the use of the pachyderms for pure spectacle for this reason. circus history 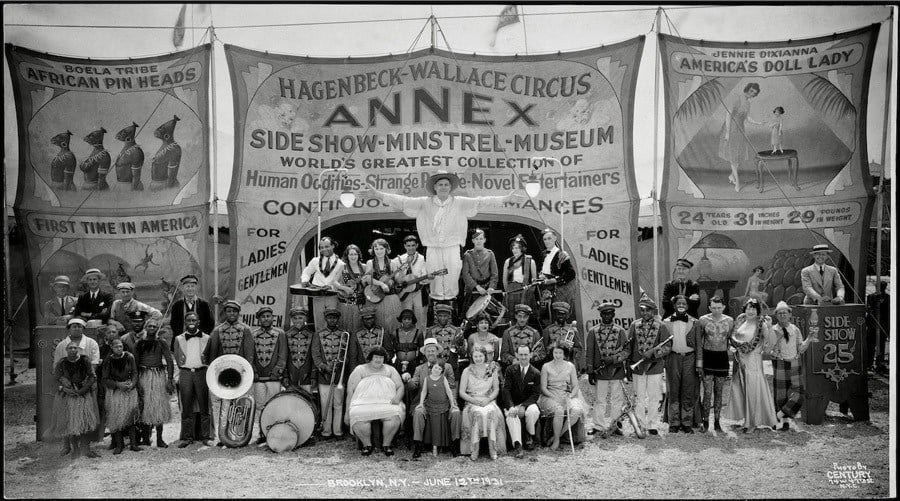 Many individuals with deformities or disabilities found work at the circus, since otherwise it would be incredibly hard--if not impossible--for them to find gainful employment. The more bizarre the act, the more popular it would be, and the more money would be made. Some of the performers were natural wonders, and others ‘invented’ themselves to become a marketable commodity. new republic 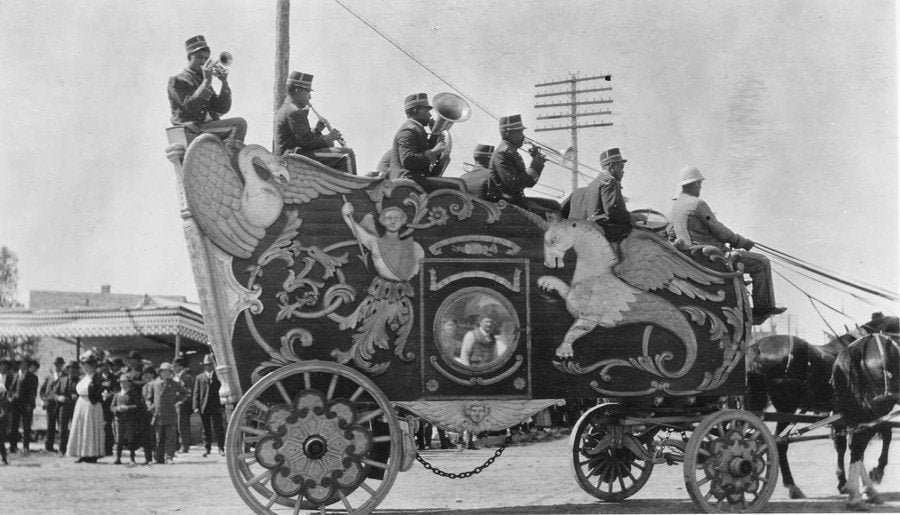 Given the alternate world that circuses carried in their caravans, towns often held parades upon a circus' arrival. Musicians and other acts would perform to sell additional tickets to the audience. mt history revealed 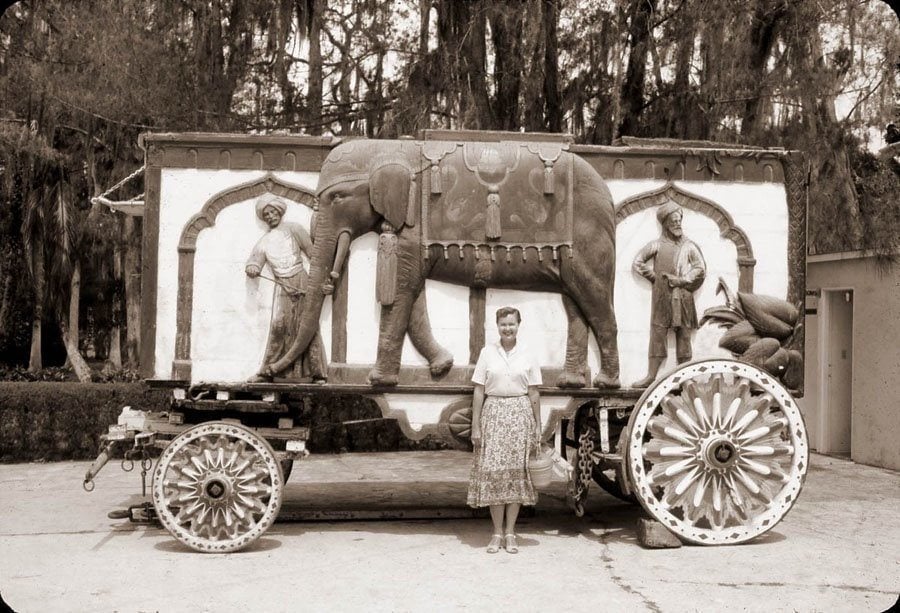 As much as the acts traveling within them, the circus wagons themselves contributed to the circus' other-worldly aura. circusnospin 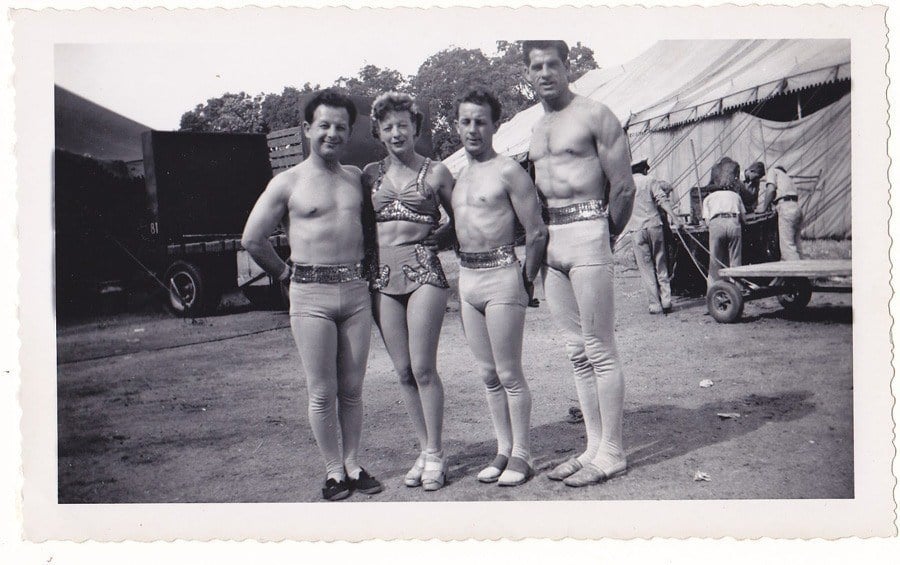 Trapeze acts were also huge attractions at the traveling circus. Family acts tended to dominate this sphere of the circus world, too. Featured here are brothers Harold and Jack Voise, along with two other performers (possibly Eilene and Bob Porter). Harold Voise 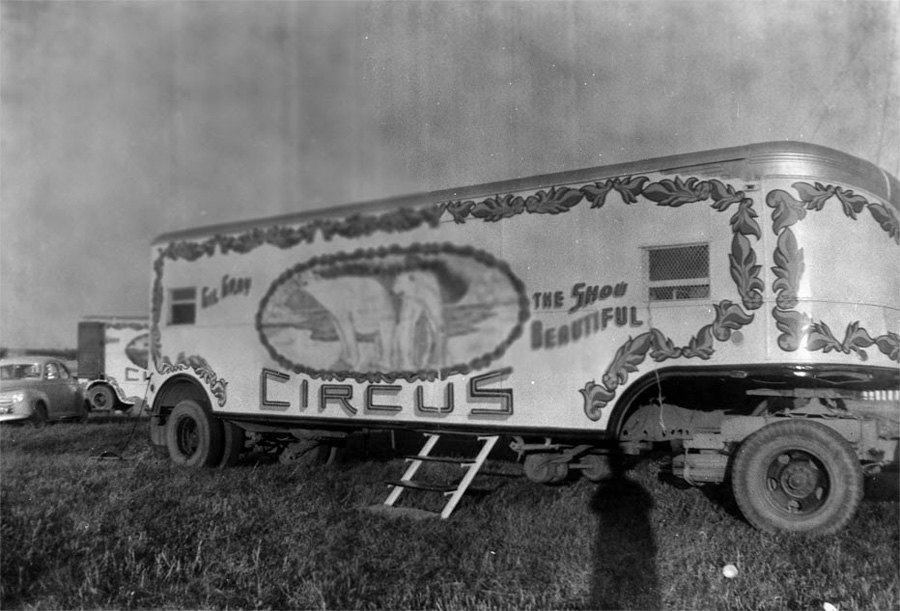 The circus wagon trailer for ‘The Show Beautiful’. Harold Voise 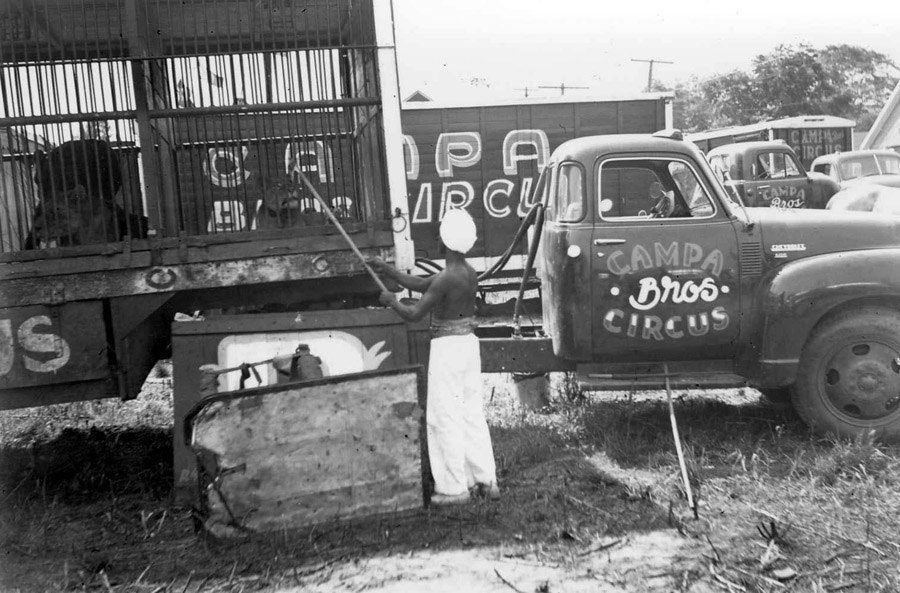 The caged animal cars were perfect for giving potential circus goers a quick peek at the wild attractions before attending the shows. the circus world 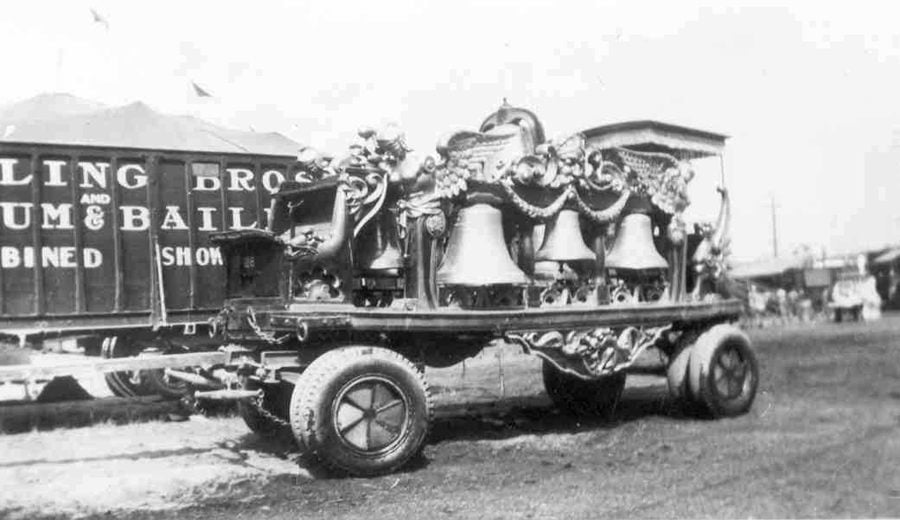 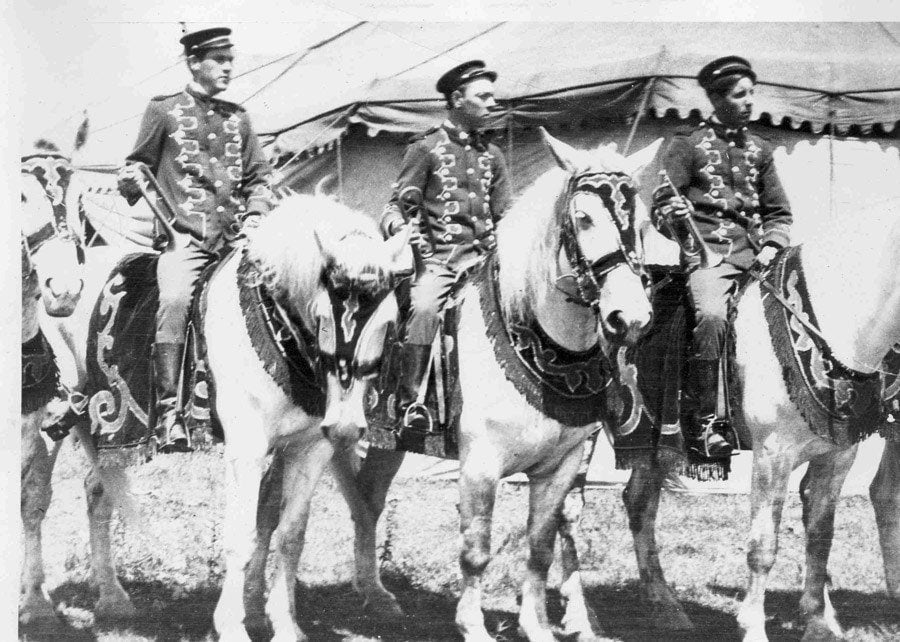 The parade of horses, performers, musicians and animals through the streets would be a whole show unto itself, leading up to the main events under the big top. Once the shows were over, the troupe would pack up, and parade back out of town to the next location. Dover Library