Inside The Troubled Marriage Of Johnny Cash And Vivian Liberto

Vivian Liberto was Johnny Cash's first wife and had four children with him. But after their divorce in 1967, she was cast as the bitter shrew who had been holding his talents back.

Though his story has become a central part of American cultural lore, the tale of Johnny Cash’s first wife Vivian Cash has been all but written out of his story.

In 1954, Johnny Cash married Vivian Liberto of Texas and they stayed together for 13 years. But during that time, Vivian Liberto Cash suffered both her husband’s infidelity as well as widespread hatred over her racial identity. After their divorce in 1967, Cash married singer June Carter, with whom he had an affair during his marriage to Vivian Cash. 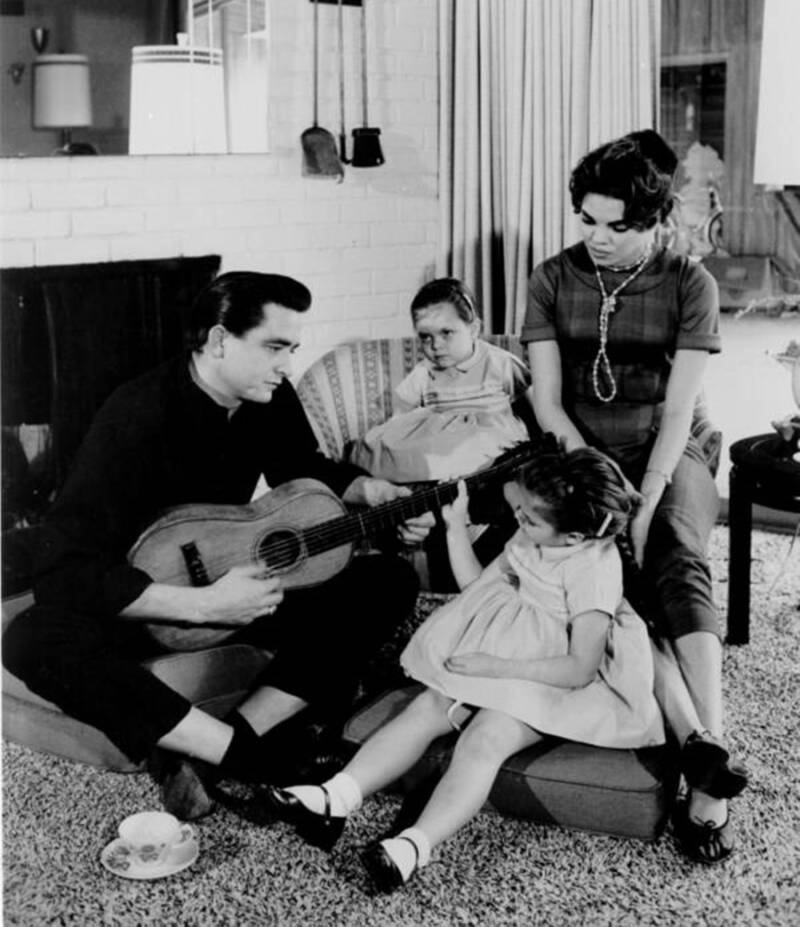 And while June Carter Cash has maintained a large part in the story of “The Man in Black,” Johnny Cash’s first wife often goes ignored. This is the widely overlook story of Vivian Cash.

Before she became Mrs. Cash, she was Vivian Dorraine Liberto. Born on April 23, 1934, in San Antonio, Texas, she grew up as the middle daughter of a strict Italian Catholic father and an alcoholic mother. 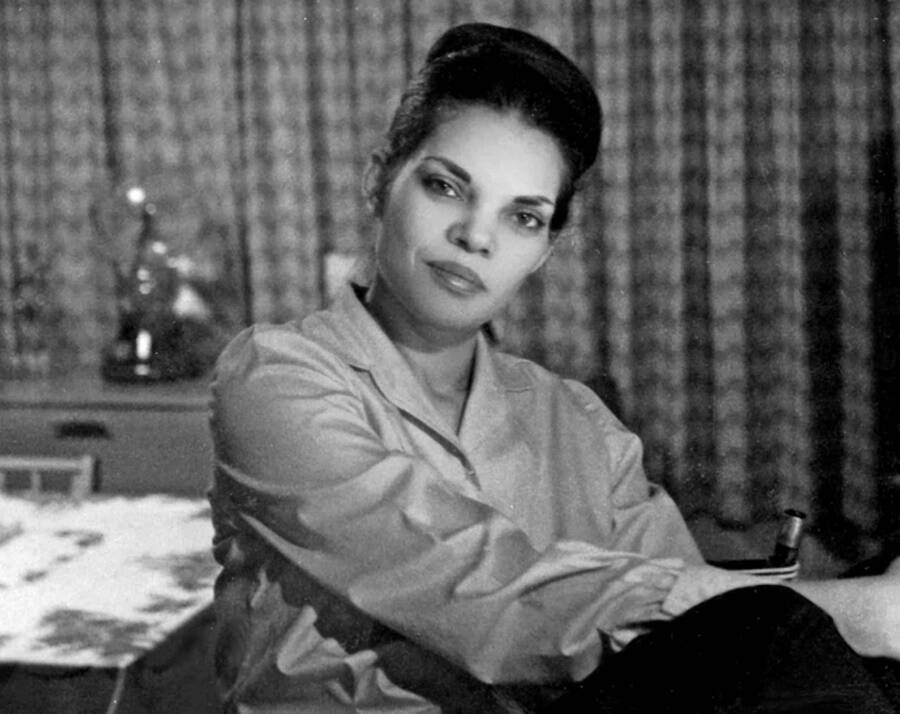 My Darling VivianVivian Liberto shared her side of the disastrous marriage in her 2007 memoir I Walked The Line.

In 1951, Vivian Liberto met young Johnny Cash by chance at an ice skating rink. The two ended up skating together and dated for three weeks.

Then, Cash was shipped off to serve in Germany for the U.S. Air Force. 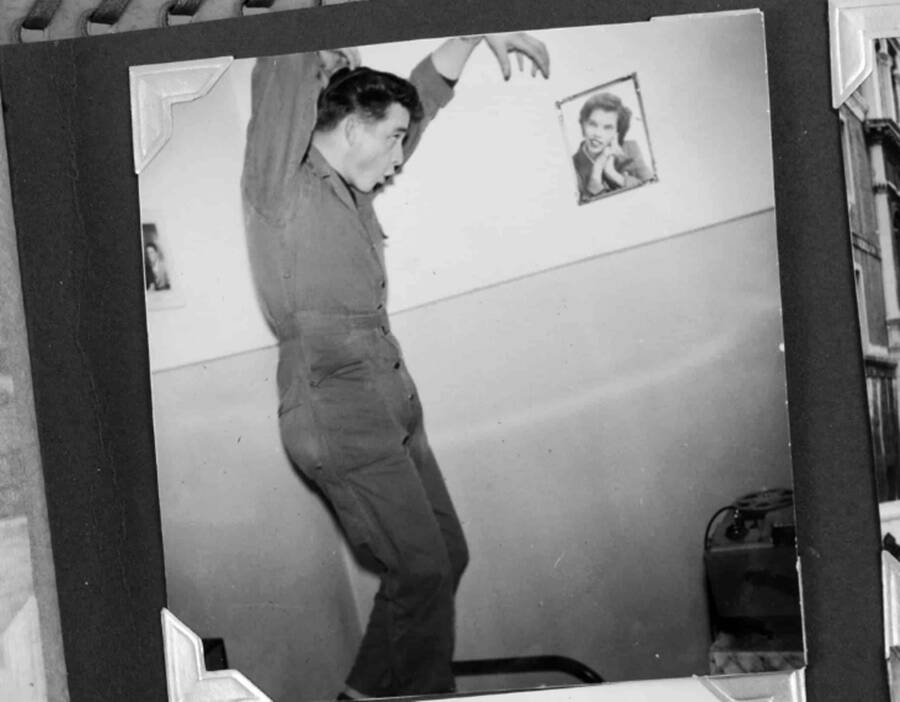 My Darling VivianJohnny Cash, presumably during his deployment in Germany.

But that didn’t end their whirlwind courtship. The young couple exchanged heartfelt love letters over the next three years that Cash served abroad. As is the way with young love, Johnny Cash wrote to Vivian Liberto often.

The couple shared everything through their correspondence, from their favorite foods to their deepest insecurities. Cash was earnest, funny, and vulnerable, and he often signed the letters with “your husband to be.”

In one of their love letters, he talks about getting made fun of at the post office for mailing her letters back for safekeeping:

“Honey, the people at the post office laughed at me today. On the customs card, under ‘description of contents,’ I put ‘500 love letters.’ They are love letters, and those people probably thought they were just the average run-of-the-mill love letters, but they’re priceless to me. I love you Viv honey. I love you so very, very much.” 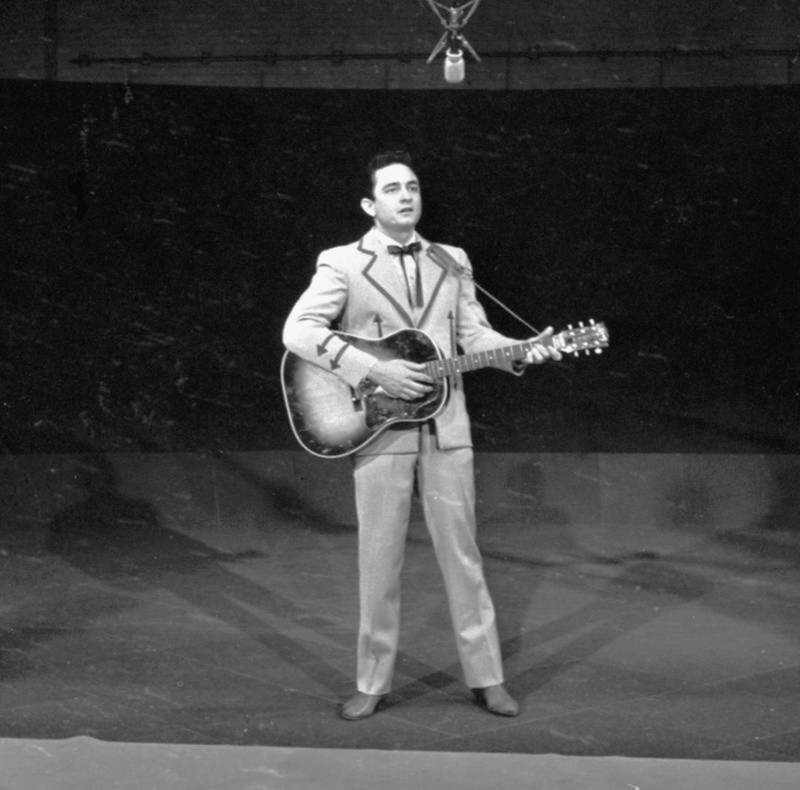 CBS Photo Archive/Getty ImagesJohnny Cash worked as a salesman before he secured a major deal with Sun Records.

Some of these letters, evidence of their once tender relationship, were published in Liberto’s 2007 memoir I Walked The Line: My Life With Johnny. 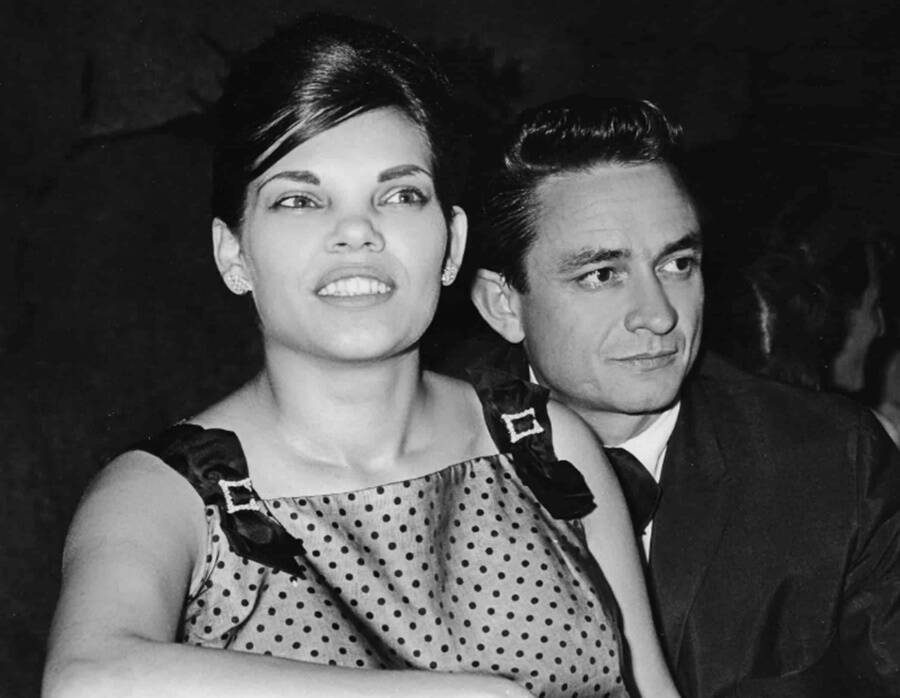 My Darling VivianVivian Liberto Cash and Johnny Cash were married for 13 years before they divorced in 1967.

When Johnny Cash returned from his military service on July 4, 1954, Vivian Liberto, along with both their families, drove to the West Memphis airport to greet him. When she saw him for the first time in three years, Liberto later wrote, she couldn’t speak.

“I just fell into his arms, he scooped me up, and we kissed,” Liberto recalled. They married the next month at St. Anne’s Catholic Church in San Antonio. Vivian Cash and Johnny Cash then moved to Memphis, where he took a job as a salesman to provide for the family.

But their lives would never be the same after Cash went to audition for Sam Phillips at Sun Records, an event Vivian Liberto described as the “one hour that would change everything.” 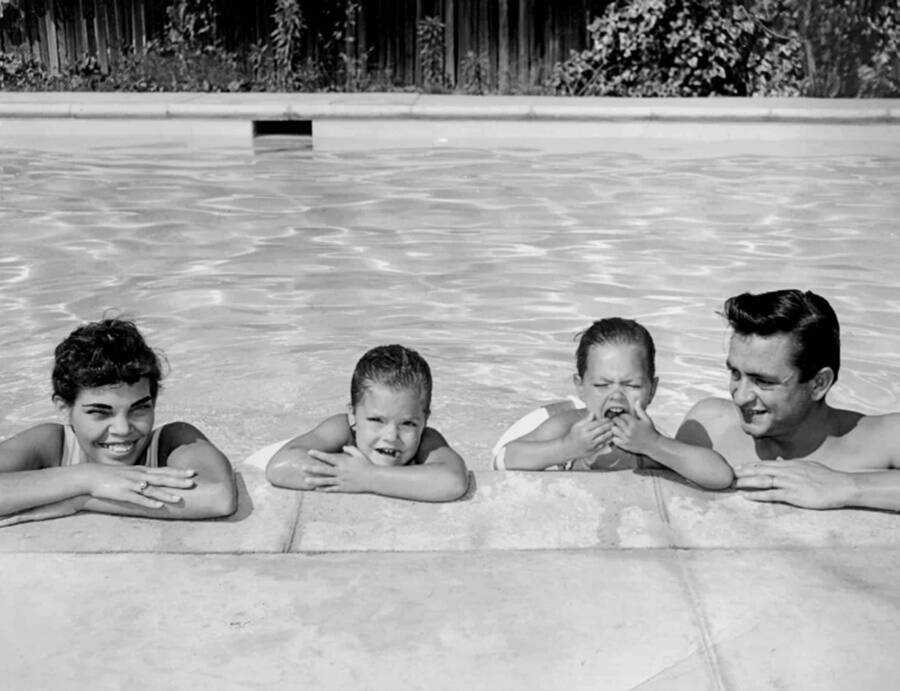 My Darling VivianThe couple’s four daughters all appear in the 2020 documentary chronicling their parents’ turbulent marriage.

Cash joined other Sun Records artists like Jerry Lee Lewis, Roy Orbison, and Elvis Presley, constantly touring and of course attracting the attention of other women. When Vivian Liberto asked Cash if he was ever tempted to cheat on her, he told her, “I walk the line for you.”

That lip service turned into Cash’s 1956 hit single “I Walk The Line.” The couple soon moved to California at the behest of Cash’s new manager, Stu Carnall. 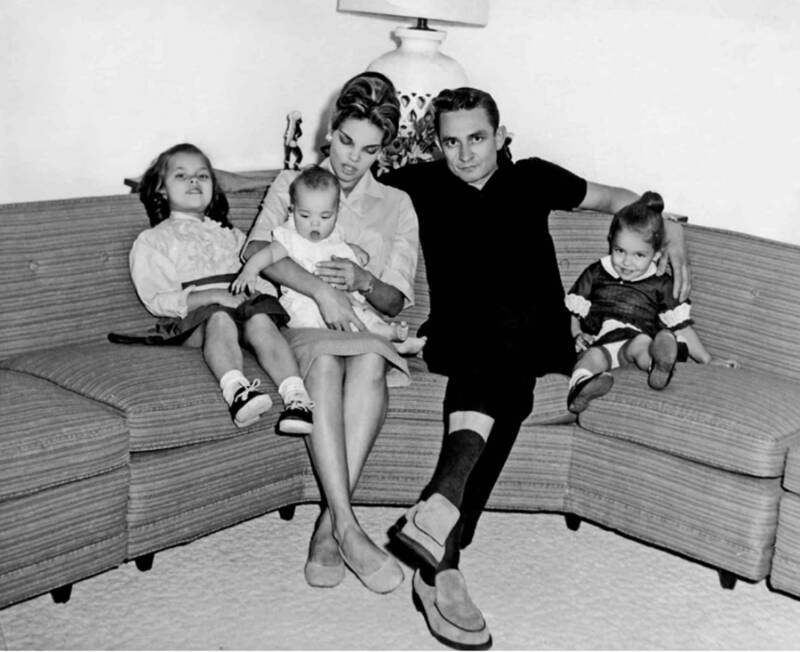 My Darling VivianJohnny Cash with his wife and daughters.

Things took a turn for the worse after the birth of their third child, Cindy, in 1958. The couple entered what Vivian Cash referred to as “a dangerous current” of partying that swept into their new Hollywood life.

Cash began to fall into drunken stupors and started popping pills. “All of the things that Johnny had called filthy and dirty’ and had insisted would destroy our lives were things he began to embrace,” Liberto wrote.

In 1961, following the birth of their fourth and last child together, Tara, the couple moved to Casitas Springs. Liberto hoped the move would help fix their crumbling marriage, but her husband’s shenanigans continued.

Cash often escaped to Lake Casitas, where he explored his love of fishing, booze, and drugs — a combination that made him a fixture for the local police. Most notably, Cash set off a forest fire in the area during one of his drunken stupors, which led to a hefty fine of $82,000.

In spite of his reckless behavior, Vivian Cash mostly blamed the destructive behavior of her ex-husband on drugs. Following his death on Sept. 12, 2003, Liberto wrote, “To me he is and will always be my wonderful, caring, protective husband.”

The End Of The Line For Their Marriage

After Johnny Cash’s drug arrest in 1965, a newspaper printed a photo of him with Vivian Liberto. It caused an uproar among fans because readers thought Liberto was African American instead of Italian American.

Furor over the presumed interracial couple triggered canceled concerts and protests in the South. More frightening were the death threats Cash and Liberto received from the Ku Klux Klan.

On top of that, Liberto had long harbored suspicions of Cash’s affair with fellow singer June Carter. She noticed her husband spent less time at home, she found receipts for gifts worth thousands of dollars, and she received hints from his bandmates and family members about the relationship. 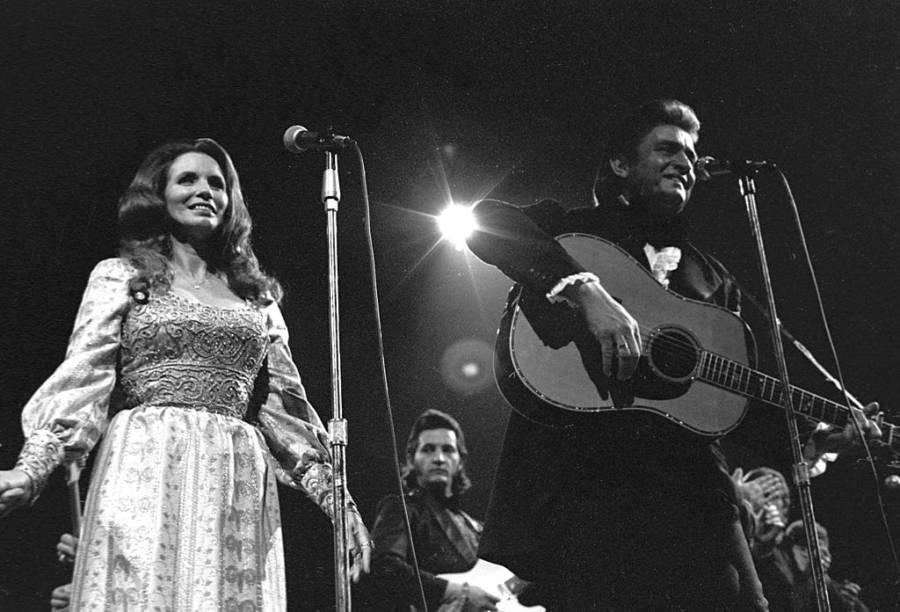 “Once June came along, she relentlessly — well, she wanted Dad and she was going to get him,” said Liberto’s daughter Cindy. “And she did. She made herself very available, to where he pursued her back.”

In 1966, Vivian Liberto filed for divorce. Losing her husband to another woman, she wrote, was a “degrading, horrible experience.” Their divorce was finalized in late 1967. The divorce was a shock to many close to the couple, especially Liberto’s devout Catholic family.

“She’d say, ‘If I only could have traveled with him instead of being here raising four kids, things would have been different,'” recalled longtime friend Alice Smith. “She said that a lot.” 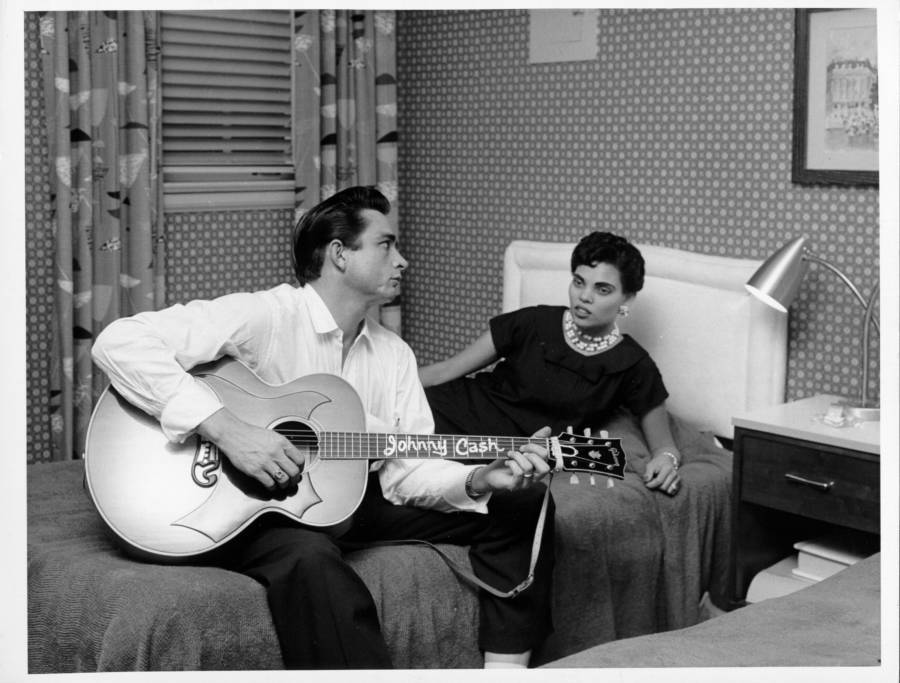 The Catholic Church excommunicated Vivian Liberto because of the divorce, forbidding her from taking communion. It wasn’t until her famous ex-husband wrote to the archdiocese confessing his failings as a husband and father that Liberto was welcomed back by the church.

Liberto moved into a new house with her daughters while Johnny Cash secured his own place near Nashville. She later threw herself into community activities, doing volunteer work, and joining a garden club. She eventually got remarried to a police officer named Dick Distin.

Vivian Liberto passed away on May 24, 2005, of complications from lung cancer surgery, not long after completing the manuscript for her memoir.

A Renewed Legacy In My Darling Vivian 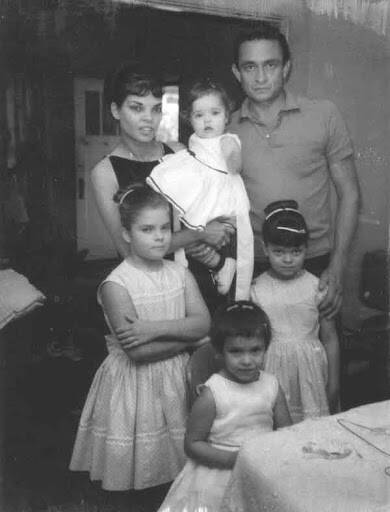 Wikimedia CommonsAccording to Vivian Liberto, another point of heartache was Carter’s claim that she was raising her daughters with Cash.

In April 2020, the documentary My Darling Vivian made its debut on Amazon as part of the SXSW Film Festival, which was done remotely due to the worldwide COVID-19 pandemic.

The documentary is the work of director Matt Riddlehoover and producer Dustin Tittle, who is the grandson of Cash and Liberto, and tells the story of Vivian Liberto’s rocky marriage with Johnny Cash and the heartbreaking aftermath. Their story is told through never-before-seen footage, photographs, and love letters the two wrote to each other.

All of Vivian Liberto’s daughters appear in the film, which they say was a love note to their mother who “faded into negative obscurity” after her 13-year marriage to Cash fell apart.

The film was also a rebuke to portrayals of Johnny Cash and June Carter, whose romance was elevated to cult status due to popular dramatizations like the 2005 film Walk The Line. 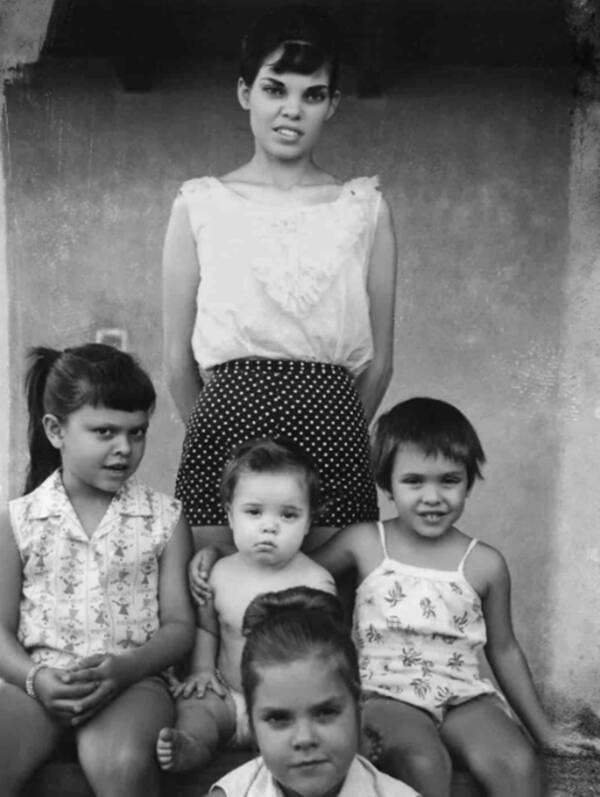 My Darling VivianVivian Liberto’s memoir received Cash’s blessing before he died in 2003 due to complications from diabetes.

The Oscar-winning film starring Joaquin Phoenix and Reese Witherspoon as the singing couple cast Vivian Liberto as a bitter shrew. It also venerated the relationship between Cash and Carter that destroyed his marriage with his first wife.

“Now that Vivian’s truth is being told at a time when our society is beginning to listen to its aggrieved women, maybe her joy and pain and reality can be fully accepted,” Riddlehoover said of the project. “Her life was romantic and bewildering, difficult and significant, and wholly filmic — more than a mere footnote in the biography of Johnny Cash.”

The biggest difference between the 2005 film and Vivian Liberto’s side of the story is Carter’s alleged role in the break-up. In her memoir, which received Cash’s blessing before he died, Liberto recalled one incident where Carter allegedly told her, “Vivian, he will be mine.”

“She wanted people to know June went after Johnny,” said Ann Sharpsteen, who co-authored the book with Liberto. “That was where most of her pain and anger rested all these years.”

Vivian Liberto also wrote about the anger she felt when Carter claimed credit for raising Cash’s daughters, and she accused Carter of enabling Cash’s drug habit. Still, the full truth behind Cash and Liberto’s broken marriage remains a mystery since all three persons passed before Liberto’s book published in 2007.

Although it may have taken decades for it to happen, Johnny Cash’s first wife Vivian Liberto was finally able to tell her side of the story in the end.

After learning about Vivian Liberto Cash, Johnny Cash’s first wife, take a look at the rock ‘n’ roll groupies who changed music history and learn about the history of hippies and the 1960s movement that changed America.