The 1920 bombing of Wall Street killed a total of 38 people, making it the deadliest terrorist attack in 20th-century New York City. 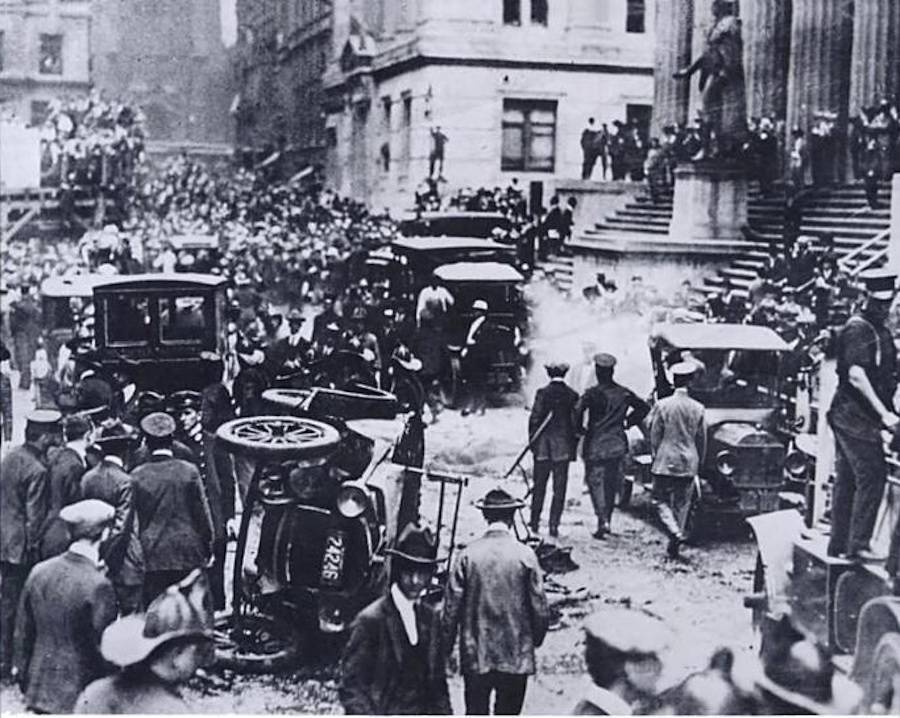 In September 1920, an abandoned horse-draw cart exploded in the middle of Wall Street, the bustling financial center of New York City. The explosion killed 30 people instantly and injured hundreds of others nearby.

Just outside the steps of the most powerful banking institution in the world at the time, J.P. Morgan bank, were the severed limbs and charred bodies of innocent bystanders.

But authorities struggled solve the case of the 1920 Wall Street bombing. It wasn’t until decades — even a century — later that historians would stumble upon a suspect, which is considered one of the earliest terrorist attacks in the history of the country. At the time, it was the worst terrorist attack the city had ever seen.

The Events Of The 1920 Wall Street Bombing 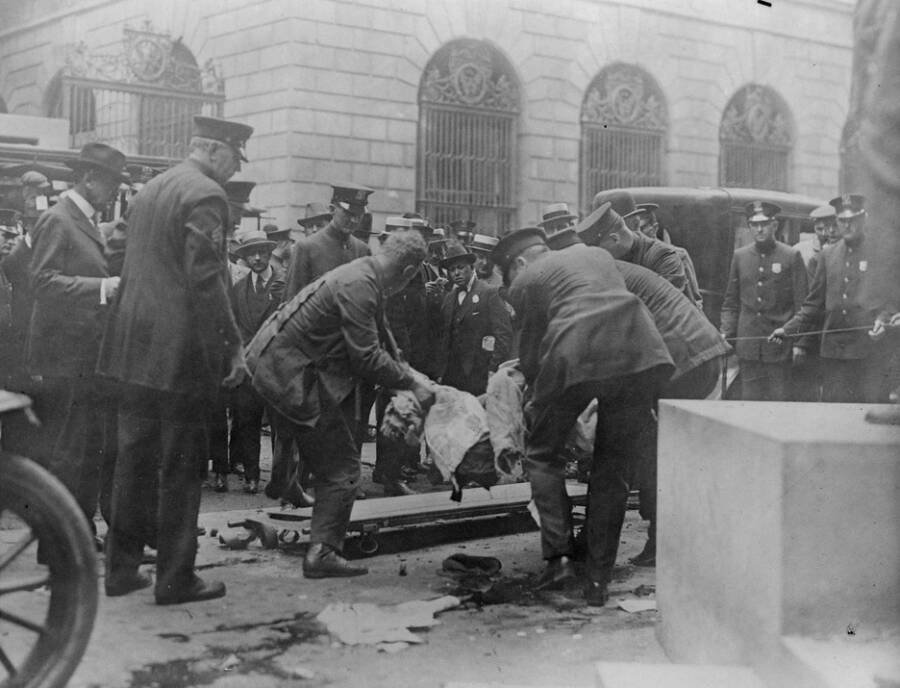 Boston Public LibraryThe explosion was considered to be the city’s first terrorist attack.

At 12 p.m. on Sept. 16, 1920, a horse-drawn cart stopped in front of the headquarters of J.P. Morgan Bank at 23 Wall Street in New York City. Not only was J.P. Morgan the most powerful financial institution in the world at the time, but it was also located right in the middle of the city’s burgeoning seven-mile financial district, also known simply as Wall Street.

Wall Street had become the symbolic hub of commerce due to the fact that the New York Stock Exchange (NYSE) was located there. Today, the NYSE is the largest stock exchange in the world with an equity market capitalization worth over $25 trillion as of May 2020.

But back in the beginning of the 20th century, the NYSE and the city’s Wall Street district were still in their infancy. Nevertheless, it was home to many banks and businesses — and would soon be under attack.

Inside that horse-drawn cart were 100 pounds of dynamite and 500 pounds of iron weights. The driver easily came through undetected amid the hustle and bustle of Wall Street, dismounted, and left the explosives on the busiest corner of the Financial District during lunch hour. 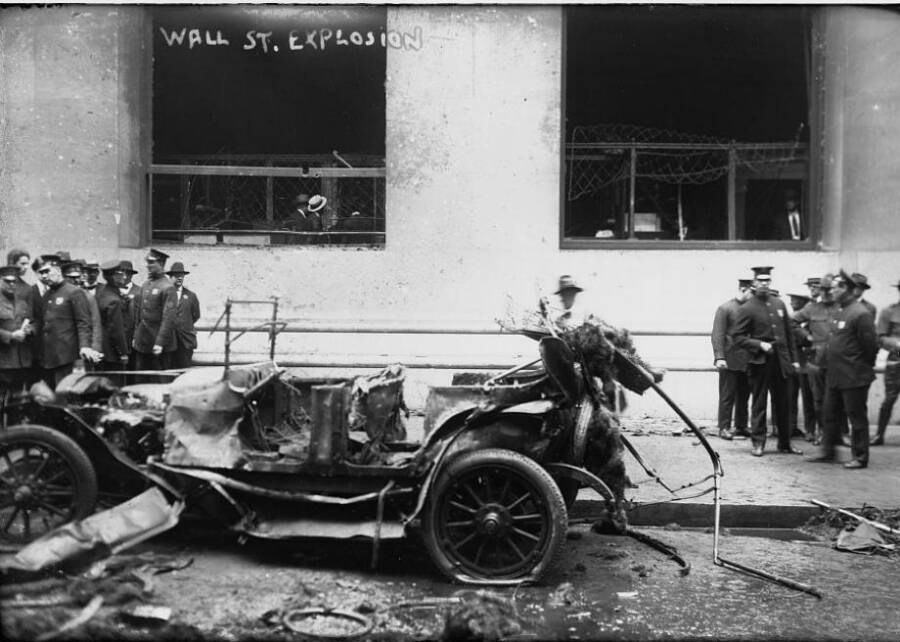 Library of CongressThe explosion injured hundreds more due to the broken glass and debris it blasted into the air.

One minute later, a massive explosion shook Wall Street. Thirty people — and the horse — were immediately killed in the blast as shockwaves from the bomb sent the heavy iron weights ripping through the air. Another eight people died from their injuries within a few days and an additional 143 were left seriously injured.

Inside the bank a 24-year-old clerk was found with a piece of debris lodged in his skull. Just outside the bank, the largest banking institution in the world at the time, were charred bodies and severed limbs.

The explosion was said to be so strong that a trolley with passengers two blocks away had been knocked over by its force.

Policemen and even financial workers on their lunch break rushed to the scene to provide aid. The police quickly commandeered any automobiles they could find to transport people to the hospital — and all trading on the stock exchange was suspended for the day.

At the time, the Wall Street bombing of 1920 was no doubt the deadliest terror attack in U.S. history. Even now, the destruction of that blast can be found right around 23 Wall Street, where the building is still pockmarked with shrapnel. 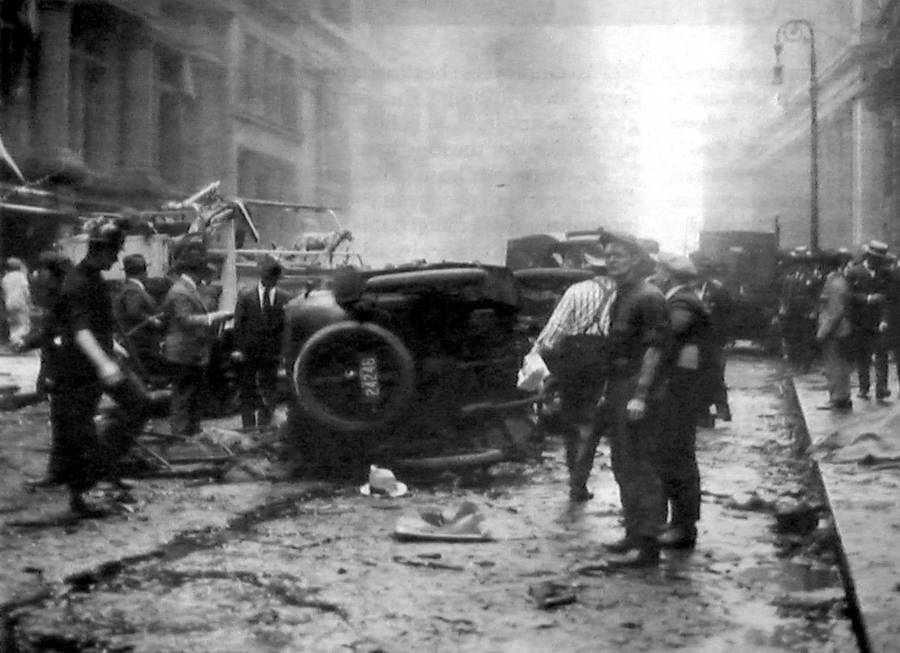 Though the 1920 bombing on Wall Street was one of the earliest incidents of terrorism known in the U.S., it wasn’t the nation’s first. Ten years earlier, a labor agitator planted a bomb outside the offices of the Los Angeles Times. Twenty people were killed and the building was destroyed, but at least investigators were able to nab the assailants.

Then, in 1914, a trio of anarchists accidentally set off a bomb meant for John D. Rockefeller inside their Harlem apartment, killing four.

The explosion on Wall Street, however, was different. Bombings typically targeted specific individuals or public figures, yet the explosion at 23 Wall Street seemed to have no goal other than perhaps claiming as many victims as possible. Additionally, bombings were often claimed by the individuals who had orchestrated them, but nobody took responsibility for the attack on Wall Street.

Investigators struggled to make an arrest over the course of three years. Authorities had first learned of a tennis player who sent postcards to friends warning them to avoid the area on September 16, but it turned out that the man was mentally ill. Investigators also tried to track down whoever had made the shoes for the horse involved in the attack, but to no avail. 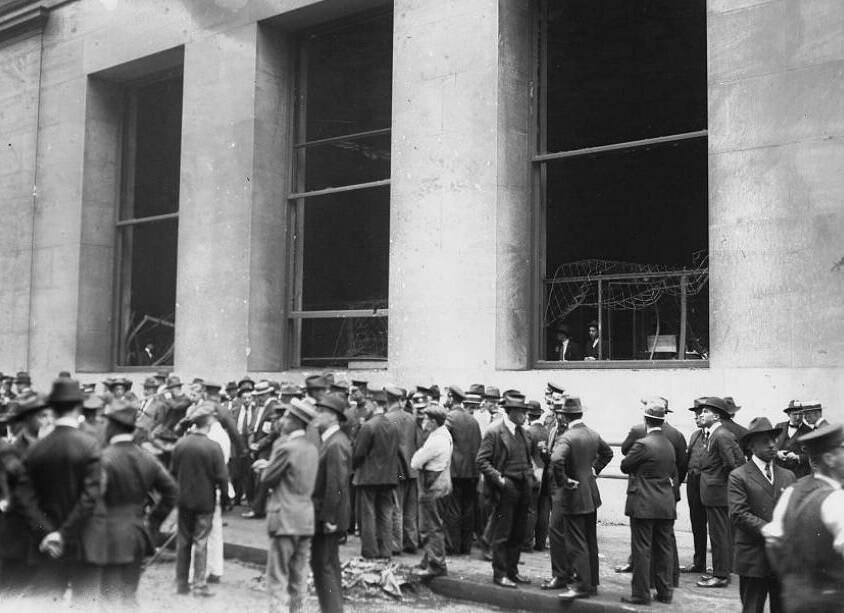 Library of CongressSpectators gather around the aftermath of the bombing on Wall Street.

However, there were plenty of suspects. Among them were Italian anarchists and Russian communists who had emigrated to the United States following the Bolshevik Revolution. Another theory posited that the explosion was a part of a failed robbery on the nearby Sub-Treasury building, where $900 million in gold bars were being moved that same day.

But not everyone was convinced that the bombing was a calculated attack; others, like Department of Justice Agent Frank Francisco, believed that it was likely just an accident.

“If an attempt had been made on the Morgan offices, I believe it would have been made at night, or some radical would have secured a position in the institution and planted an infernal machine inside,” Francisco told the New York Times after the bombing.

But these were simply guesses that never led to any official conclusion. Furthermore, in the rush to reopen the NYSE as quickly as possible, city officials may have likely accidentally disposed of any evidence that could have aided in the investigation.

The 1920 Wall Street bombing remains officially unsolved to this day.

The 1920 Wall Street bombing stayed unsolved for decades after the attack and is still unofficially solved to this day.

It wasn’t until the FBI reopened the case in 1944 that authorities concluded anarchists had likely been behind the bombing. As World War I drew nearer, anarchists believed capitalists, who made huge profits off of their unprotected workers during the wartime, needed to be eradicated in order to bring equality to society.

The year before the Wall Street bombing, followers of the Italian anarchist leader Luigi Galleani, known as “Galleanists,” carried out a letter bomb campaign that targeted prominent businesses and political leaders.

The Galleanists had launched a series of bombings across the country just a year before the explosion on Wall Street. As such, authorities came to believe that anti-capitalists or anarchists were likely responsible for the 1920 bombing of Wall Street. However, investigations right after the attack failed to produce any hard evidence linking the Galleanists to the bombing. 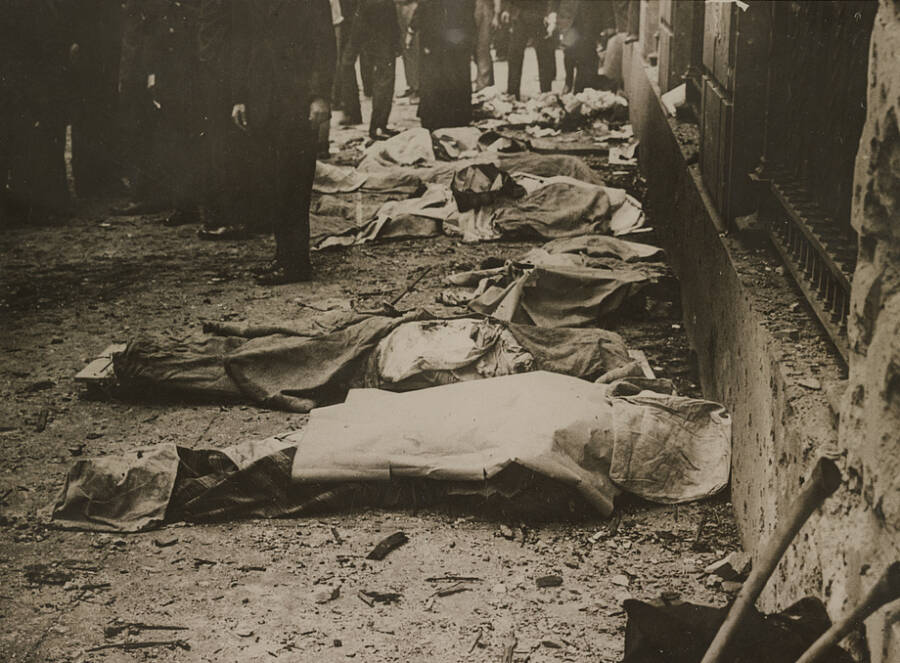 Library of CongressA total of 38 people were killed in the blast.

With the benefit of hindsight, some historians have concluded that the bomber was likely a Galleanist named Mario Buda, an anarchist who is believed to be have been responsible for several similar bombings across the country.

Further supporting this hypothesis is the simple fact that Buda had allegedly rented the very same horse-drawn wagon that was used in the Wall Street bombing and had been in New York City on the day of the attack.

Shortly after the bombing, Buda left for Italy and never returned to the U.S. In the following decades, several people who knew him have claimed that he admitted to the attack. But these proclamations remain hearsay.

Which is why, to this day, the case of the Wall Street bombing remains officially unsolved.

Next, see what New York City looked like 100 years ago in stunning color. Then, see what life was like for an immigrant in 20th-century America.