The Violent Ways Humans Have Used Animals As Weapons

During the Cold War, the Brits thought of a weapon so preposterous that everyone assumed it was a joke when it was declassified on April Fool’s Day in 2004. What was this ridiculous weapon, you ask? Chicken-powered nukes. It all started in 1957, with the British-developed nuclear project called Blue Peacock. According to the plan, the British would bury several nuclear weapons in the North German Plain and detonate them should the Soviets decide to invade from the East.

The main concern was that the German winters were too cold for the electronics to work. The brightest minds in Britain worked around the clock to find a way of insulating the bombs until, eventually, they found the most obvious solution–chickens.

Simply toss a chicken inside the bomb, give it some food and water and it will generate enough body heat to keep the nuclear weapon functional. Shockingly, the British never went through with this plan, but only because they feared the diplomatic implications of nuclear fallout on allied territory. 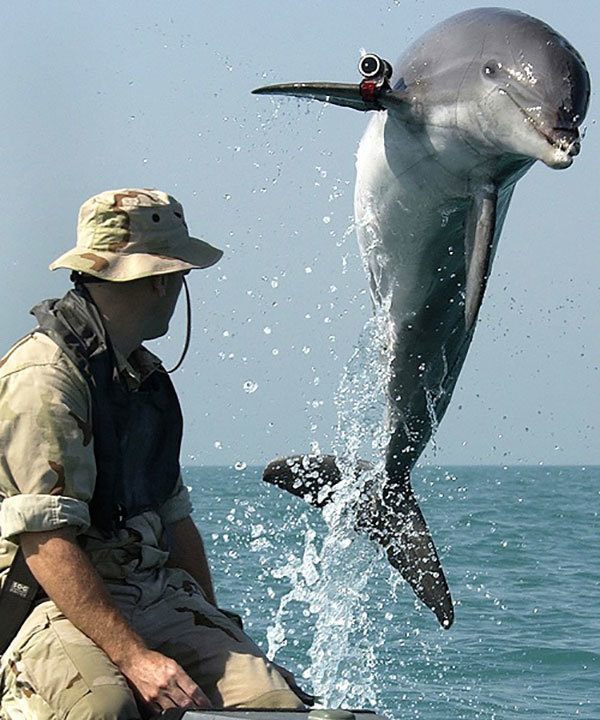 Dolphins cleared mines in the Persian Gulf during the Iraq War. Source: Wikipedia

Most of our attempts to use animals as weapons have failed miserably, though there have been a couple success stories. For example, the US Navy has maintained a Marine Mammal Program since the 1960s.

Dolphins have proven to be top of the class, serving their country for over 40 years. As it turns out, dolphins are really good at finding and marking mines. When they aren’t on the frontlines, dolphins also make great underwater “guard dogs”. They patrol restricted waters and alert their handlers when they detect intruders.

Next, meet some of the most dangerous animals on planet Earth.