The Sci-Fi Buddhist Temple That Is Wat Rong Khun

Wat Rong Khun, known as the White Temple, was created with the intent of making 'paradise on Earth'. But for most, this doesn't include murals of Keanu Reeves. 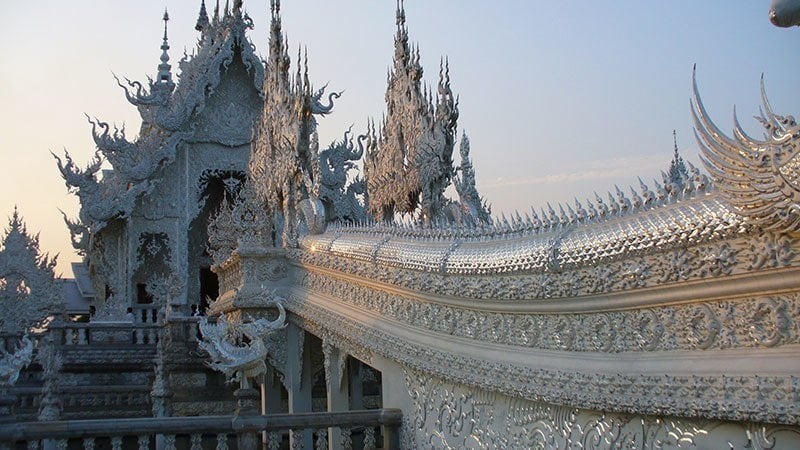 The old adage “You can’t judge a book by its cover” apparently also applies to a temple. Within Thailand’s Wat Rong Khun — popularly known as the White Temple — you will encounter a somewhat non-traditional interior.

Where you may expect to find reverent Buddhist sculptures and quiet areas of worship, you’ll see crazy murals that blend science fiction imagery, pop culture and the teachings of Buddha. The reasoning? As artist Chalermchai Kositpipat said, “I desire for it to be built like a paradise. It is paradise on Earth, humans can be exposed.”

But for most, said paradise probably doesn’t include Keanu Reeves. Or, for that matter, being surrounded by spaceships locked in a battle for your soul.

The temple’s pure whiteness suggests it is fragile and delicate, but—adding to its contradictions—the temple has actually endured almost seventeen years of tourists and harsh natural elements.

Unfortunately, an earthquake damaged the White Temple in May of 2014 and was forced to close for repairs for an indefinite period of time. Tourists are still allowed to visit, but certain areas may be unavailable due to construction. Here are some of the highlights of Wat Rong Khun: 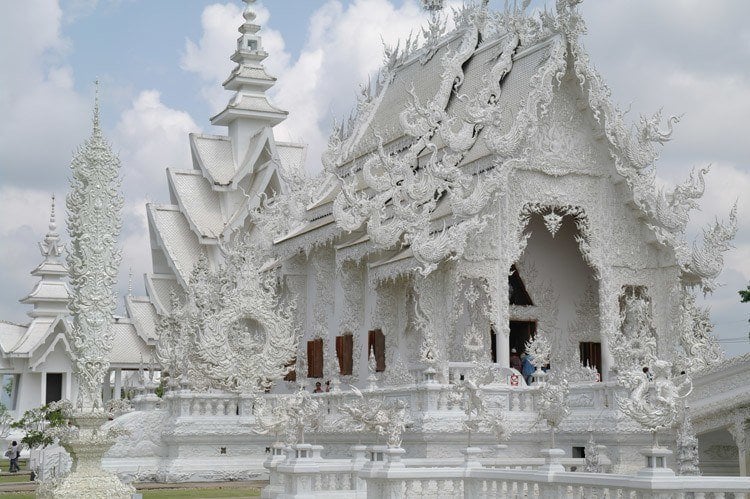 This temple’s intricacies stand out even against a washed out sky. Source: Gallery Hip 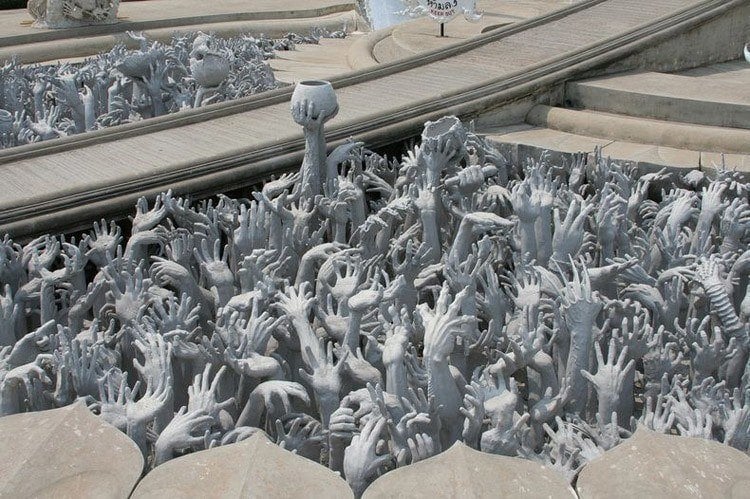 Almost everything you see here is designed for a specific reason. The pristine white color of the structure represents the holiness of the Buddha, and the moat of reaching out hands is evocative of desire. Source: Amusing Planet 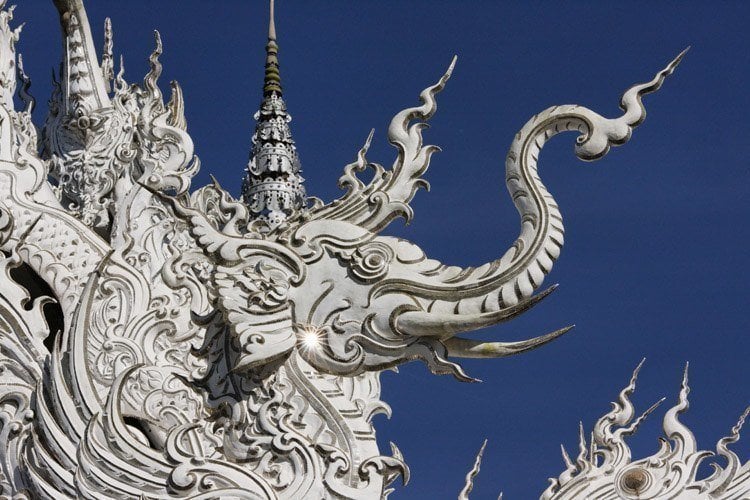 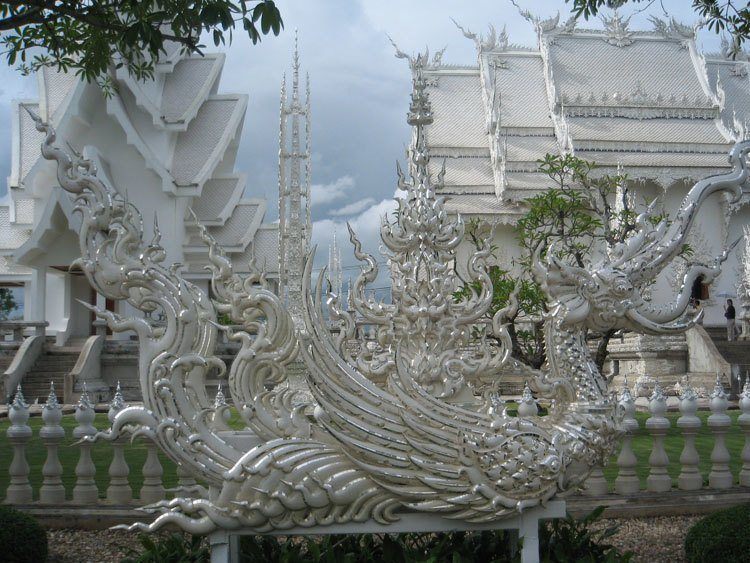 One of two dragons that can be found at the temple. Source: Yin Teing 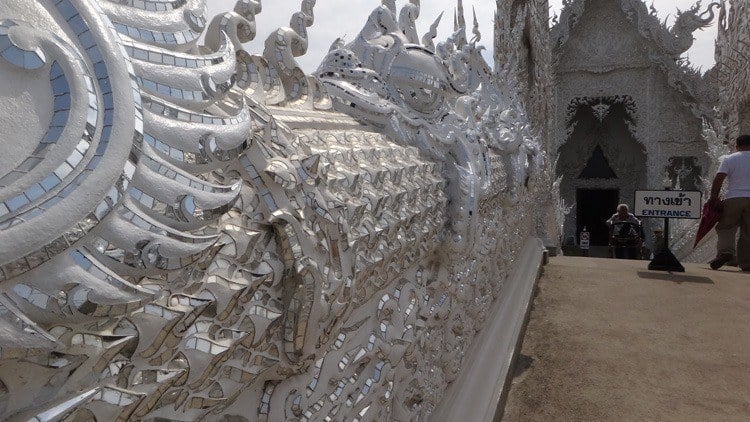 The bridge to Wat Rong Khun likely holds the most symbolism of the whole exterior. It represents a walk across the circle, sympathetic to the Buddha. The crest of the bridge features the 16 causes of sorrow, and the center of the bridge represents Mt. Meru – the center of all the physical, metaphysical and spiritual universes in Buddhist cosmology. Source: 8 Limbs 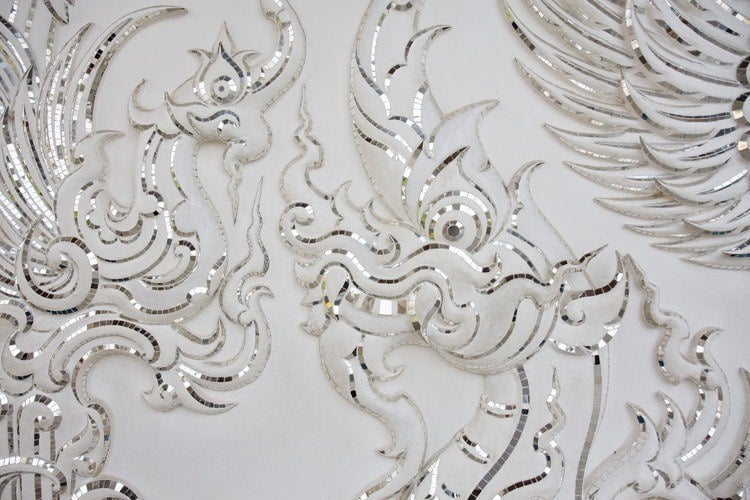 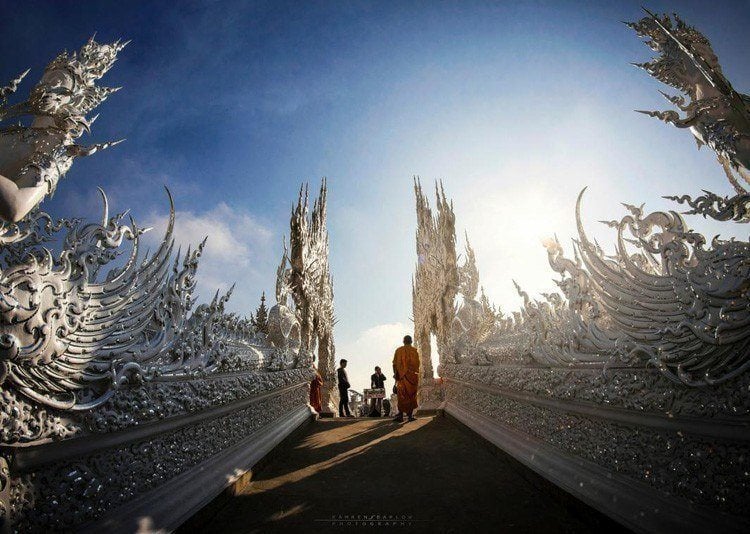 A glorious shot of the bridge you must take to enter. Source: Slate 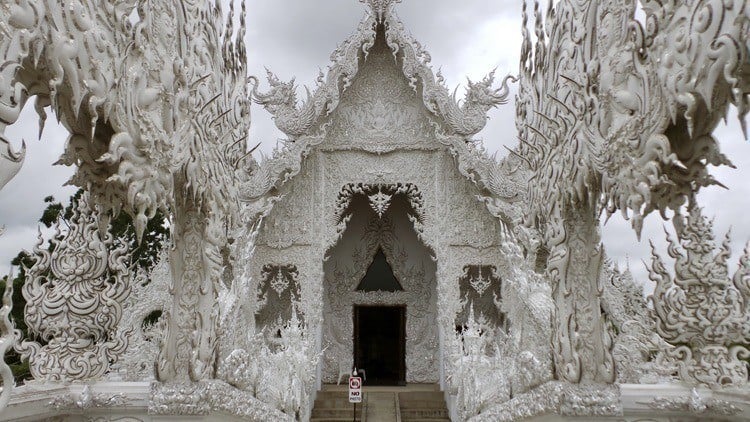 Here’s the entrance, where things start to get a little weird. Source: Wanderlust Mike 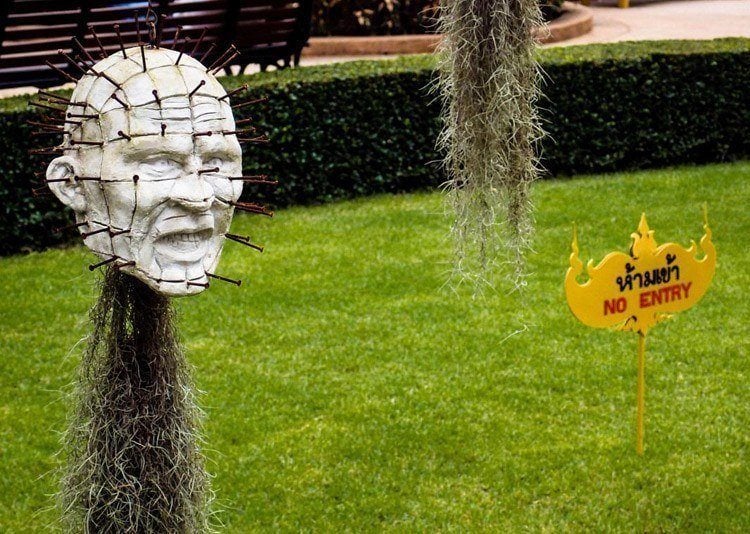 A garden stake in the likeness of Pinhead from Hellraiser; yes, this is the same White Temple as in the other pictures. Source: Slate 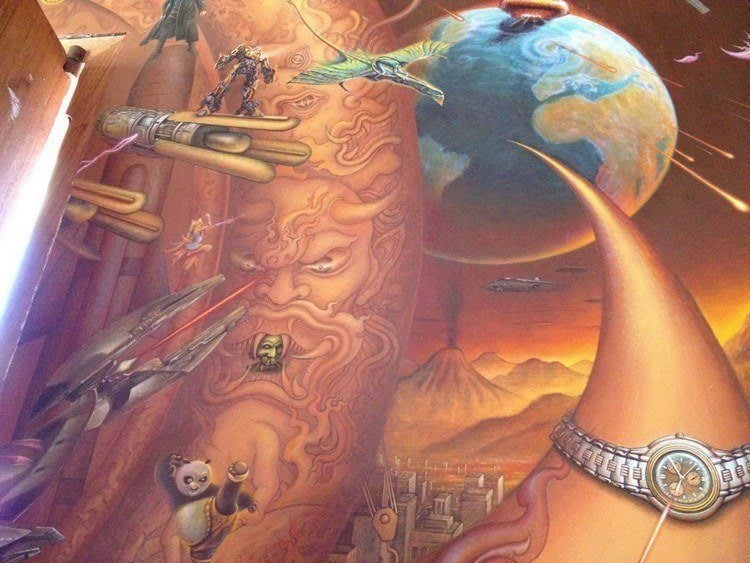 Once inside, there are several murals. The bottom half of this one features Kung-Fu Panda. Source: Slate 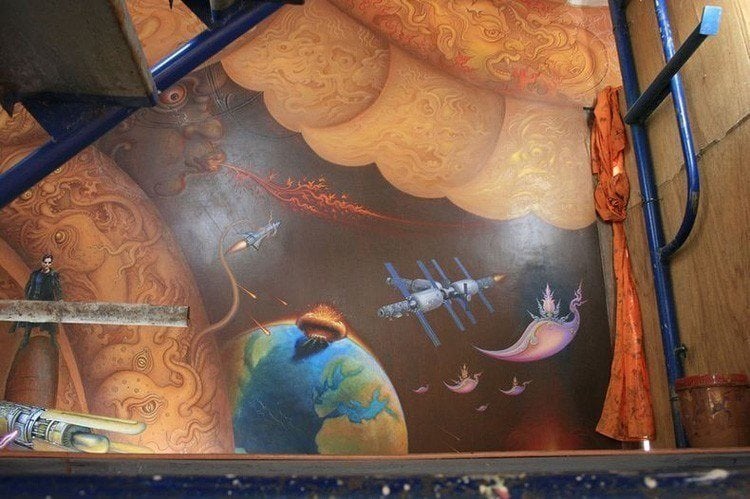 …and the upper half with Neo and other pop-culture goodness. Source: Amusing Planet 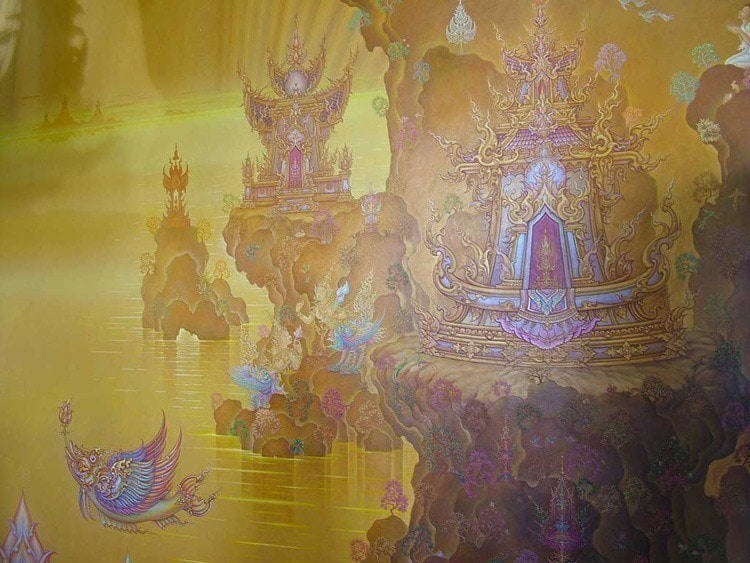 A lovely, less jarring scene of a temple by the water. Source: Abroad 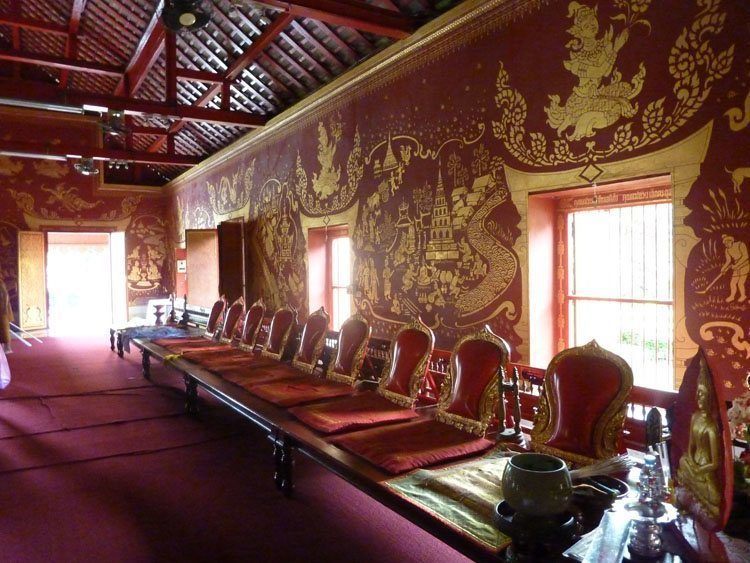 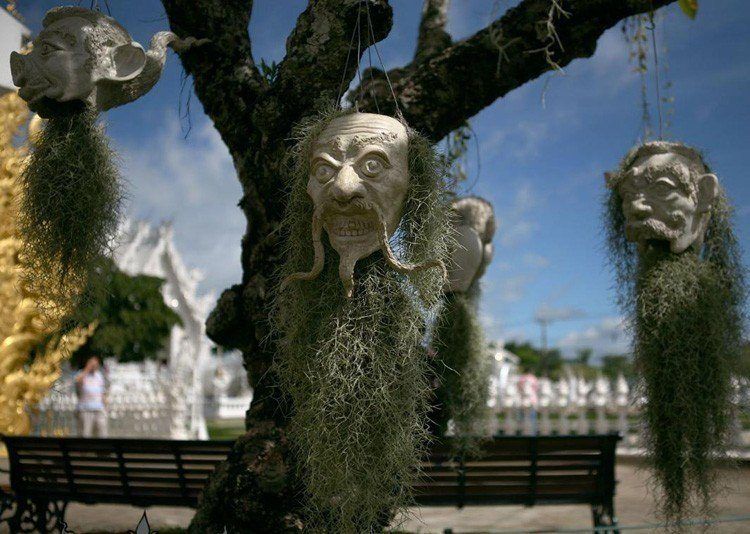 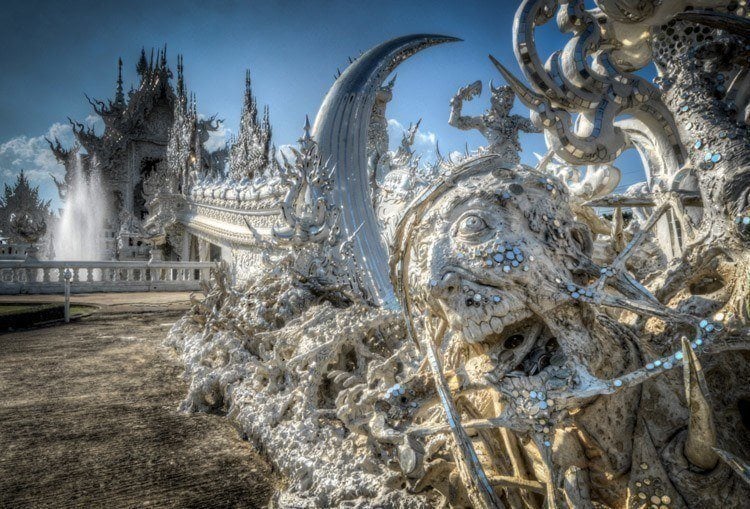 A creepy perspective of the temple, which includes the figure lurking at the base of the bridge. Source: Absolute Visit 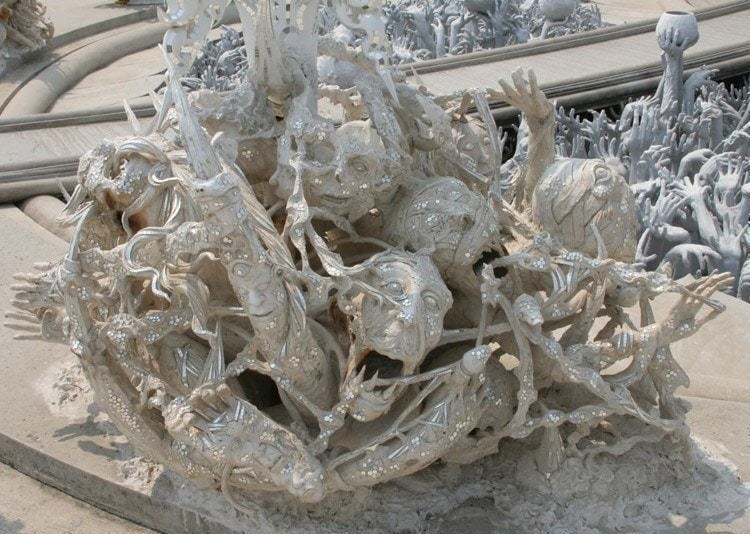 A conglomeration of lost souls. Slate 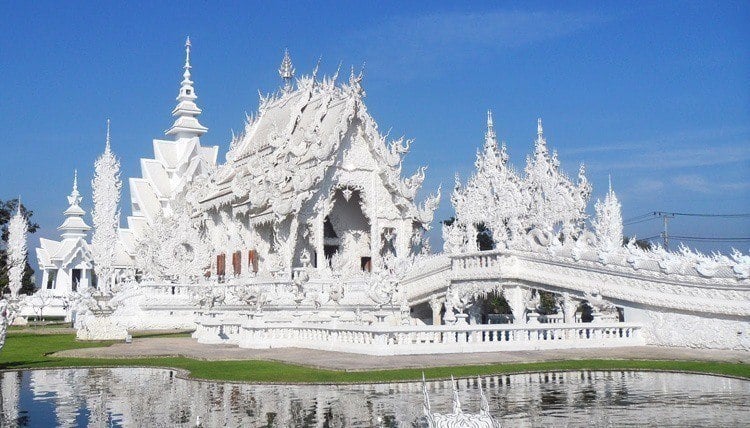 Even before the earthquake struck, the White Temple wasn’t complete; the artist planned on making the whole area consist of nine different buildings. Source: Most World Wonders 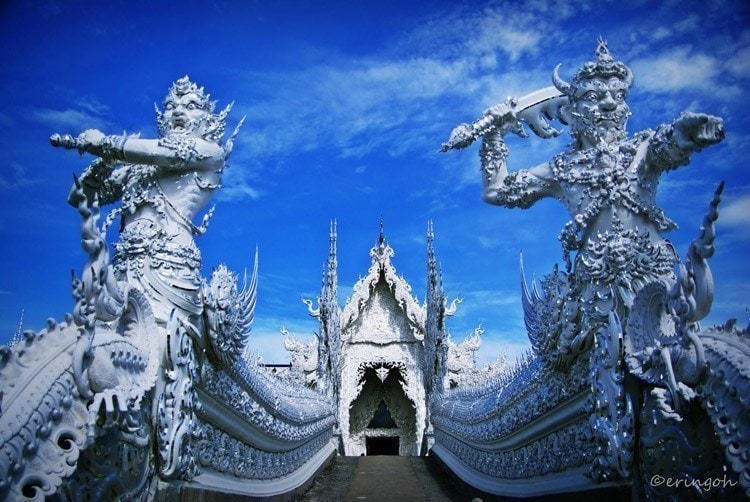 A bridge shot with the mighty warriors in view. Source: Tiaurus 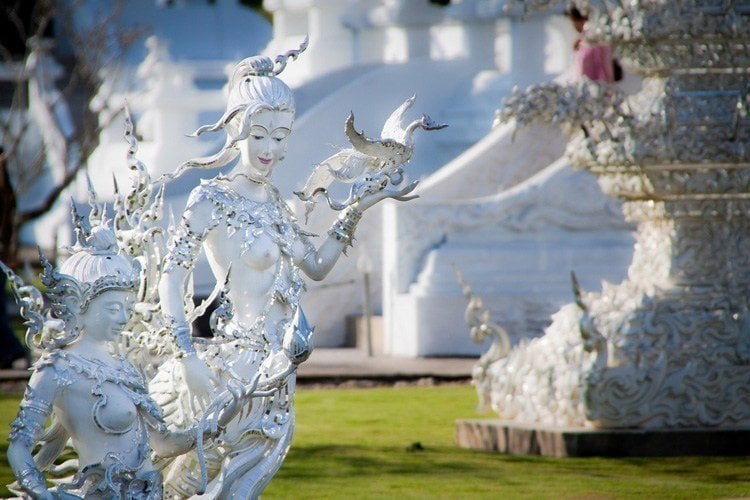 Back to the outdoor beauty of these statues by the pond. Source: Gallery Hip 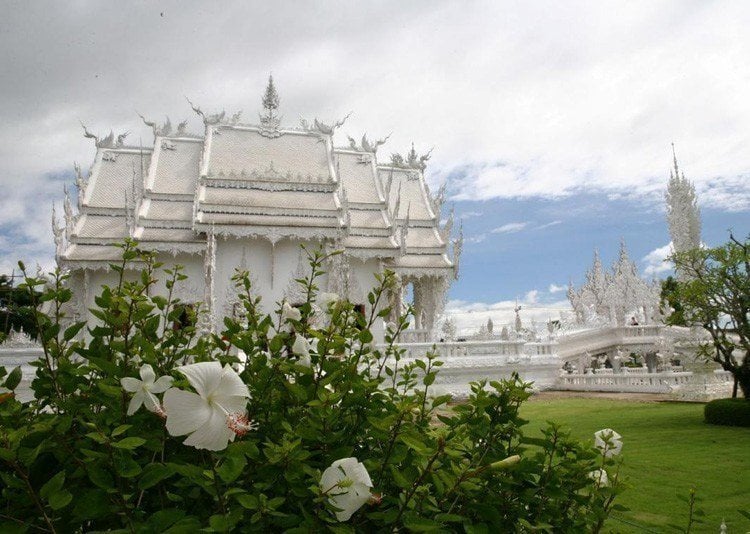 Beautiful bushes and flowers thrive in the garden. 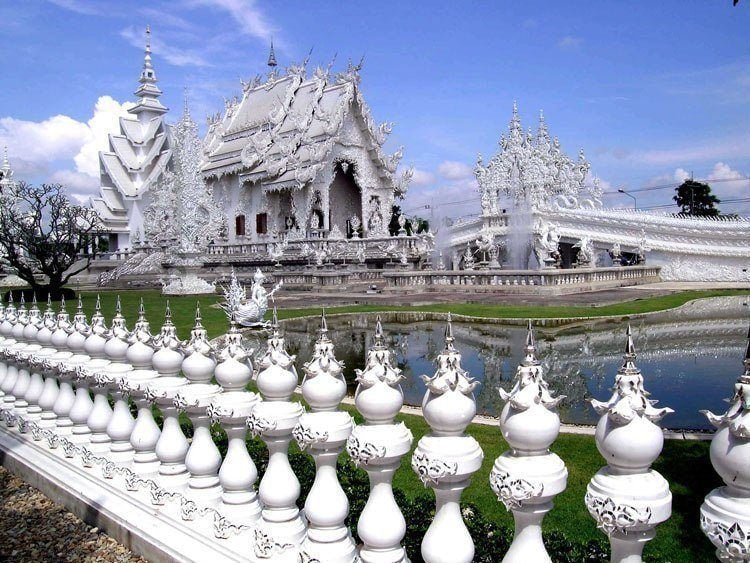 Beautifully unassuming wide shot of the strangest temple in Thailand, if not anywhere. Source: Travel In Thailand

After this look at Wat Rong Khun, the white temple, check out our other posts on interesting places around the world and the most remote places in human civilization.