When Did The Civil War End? Inside The Complicated History Of The Conflict’s Conclusion

Though history books referencing Robert E. Lee's 1865 surrender at Appomattox put forth a straightforward narrative of how the Civil War ended, the truth is much more complex. 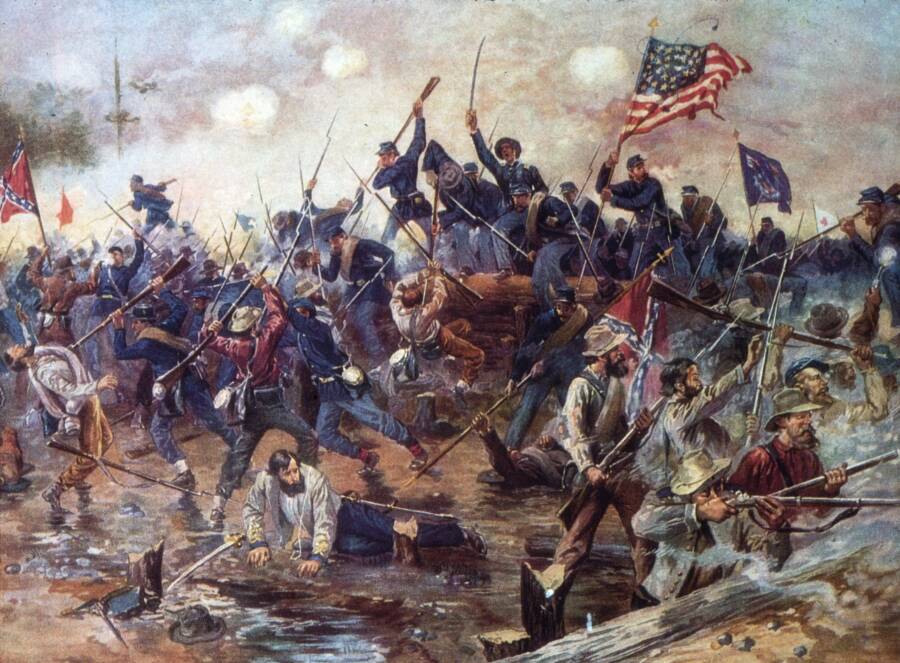 MPI/Getty ImagesThe end of the Civil War isn’t quite as obvious as it may seem.

By many accounts, the Civil War ended on April 9, 1865, when Confederate General Robert E. Lee surrendered to Union General Ulysses S. Grant at Appomattox Court House, Virginia. But the actual end of the Civil War is anything but simple.

After starting in 1861 following the steady secession of Southern states, the conflict tore across the country for four bloody years. By the time the dust began to settle in 1865, an estimated 620,000 soldiers had lost their lives during the Civil War on battlefields like Gettysburg, Antietam, Shiloh, and Bull Run.

But though Lee’s surrender to Grant marked an important moment in the war, it was only the beginning of the end. In truth, the war would continue for more than a year before President Andrew Johnson announced its end.

The Beginning Of America’s War Against Itself

In November 1860, long-simmering tensions between Northern and Southern states came to a head with the election of Abraham Lincoln. Fearful that Lincoln — who had spoken out against the spread, but not the end, of slavery — would be unsympathetic to their pro-slavery views, Southern states began to secede from the Union.

By the time Lincoln was sworn in as president on March 4, 1861, seven Southern states had seceded. In hopes of staving off a greater conflict, the president used his first inaugural address to implore them to reconsider, insisting that the North and the South were “not enemies, but friends.” 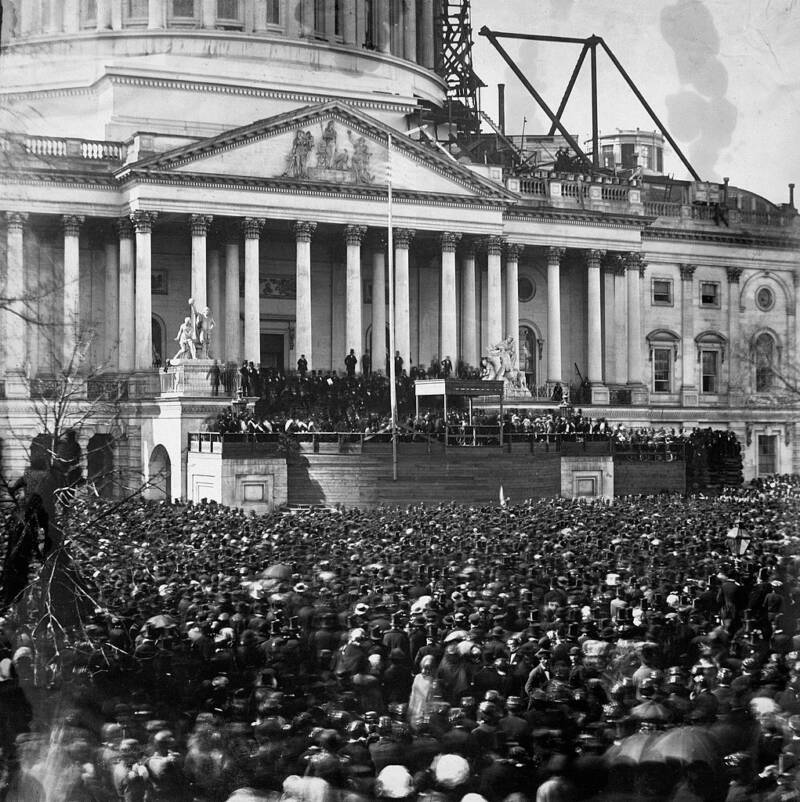 Library of CongressAbraham Lincoln appealed for peace at his 1861 inauguration, seen here, but it didn’t stop conflict from erupting weeks later.

The South, however, was undeterred. Dubbing itself the Confederate States of America (CSA), it launched the first attack of the war on April 12, 1861, with the bombardment of Fort Sumter in Charleston, South Carolina.

From there, the conflict began in earnest. Though both sides hoped the war would last mere months, it endured for the next four years. According to the American Battlefield Trust, American soldiers engaged in 10,500 military engagements that resulted in hundreds of thousands of deaths.

Between 1864 and 1865, however, the tides began to shift. Union General William Tecumseh Sherman’s “March to the Sea” devastated cities across the South, and Confederate General Robert E. Lee found his troops dwindling as he faced Union General Ulysses S. Grant in Virginia in 1865.

Lee and Grant would soon meet in the town of Appomattox Court House, Virginia, where, by many accounts, the Civil War ended on April 9, 1865.

When Did The American Civil War Really End?

In April 1865, Robert E. Lee was forced to abandon the key Virginia cities of Richmond — the Confederate capital — and Petersburg. According to the National Archives, Ulysses S. Grant sensed that his opponent had run out of options and, on April 7, wrote to Lee suggesting he surrender.

“The result of last week must convince you of the hopelessness of further resistance on the part of the Army of Northern Virginia in this struggle,” Grant wrote to his foe. “I feel that it is so, and regard it as my duty to shift from myself any further effusion of blood, by asking of you the surrender of that portion of the C.S. Army known as the Army of Northern Virginia.”

At first, Lee resisted. But by April 9th, he recognized that he and his troops were hopelessly outnumbered. With his back against the wall, Lee grimly declared: “There is nothing left for me to do but to go and see General Grant — and I would rather die a thousand deaths.” 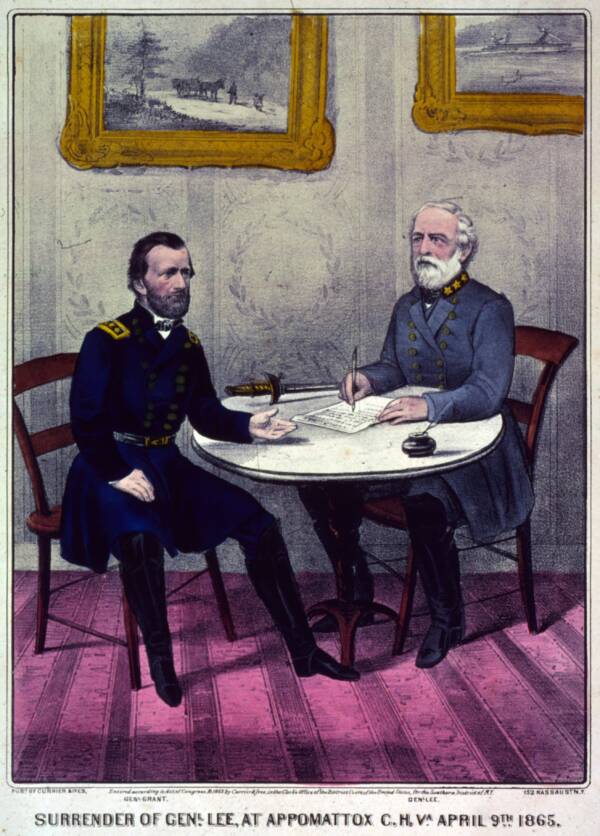 On April 9, 1865, Robert E. Lee asked for a meeting with Ulysses S. Grant, appealing for a “suspension of hostilities pending the discussion of the Terms of surrender of this army.”

The two opposing generals met in the home of grocer Wilmer McLean and hammered out the terms of Lee’s surrender. Lee agreed to surrender his Army of Northern Virginia to Gran, and in exchange, Grant agreed that all of Lee’s officers and men would be pardoned and allowed to keep their private property, including their horses and their weapons. In addition, Grant offered Lee’s starving troops access to Union rations.

Following Lee’s surrender, Grant told his troops: “The war is over. The Rebels are our countrymen again.”

But the end of the Civil War wouldn’t be that simple or that quick. In fact, the conflict would endure for another 16 months before truly coming to an end.

The Drawn-Out Ending Of The Civil War 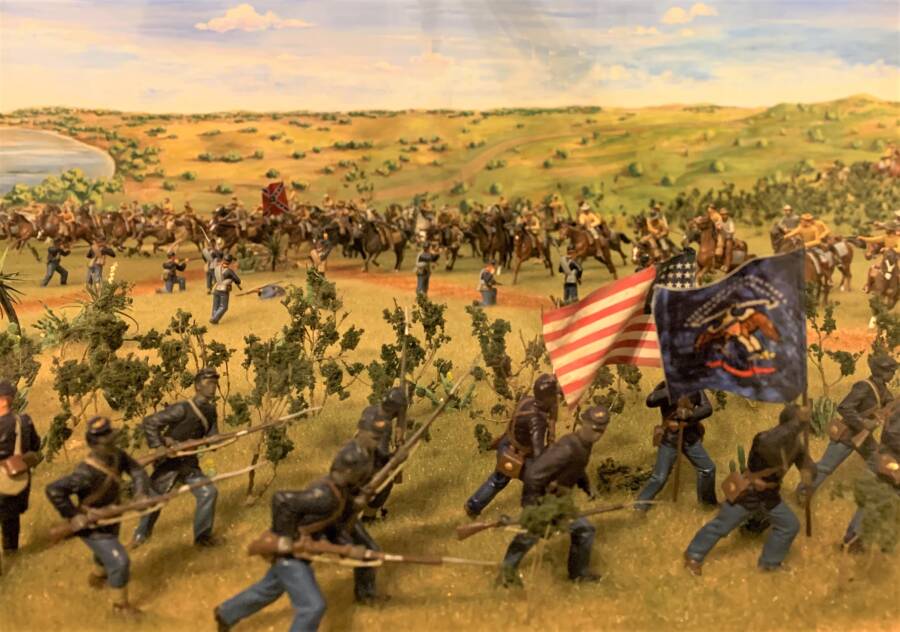 Texas Historical Commission/TwitterA diorama depicting the Battle of Palmito Ranch, which took place on May 12, 1865, in Texas. The battle is considered to be the final skirmish of the Civil War.

Though some mark the end of the Civil War with Lee’s surrender, Lee had technically only surrendered his Army of Northern Virginia. A number of other Confederate generals were still fighting across the country, including forces led by generals Joseph E. Johnston, Richard Taylor, and Edmund Kirby Smith.

But news of Lee’s surrender caused a ripple effect among the others. On April 26th, Johnston surrendered. About a week later, on May 4th, Taylor followed his lead. Six days later, on May 10th, Confederate President Jefferson Davis was captured near Irwinville, Georgia.

And as the dominoes of the Confederacy began to fall, the last skirmish of the Civil War took place on May 12th, at the Battle of Palmito Ranch in Texas. But though Confederate Colonel John Ford defeated Union Colonel Theodore H. Barrett, his victory couldn’t stem the tides of change. Two weeks later, the last major Confederate general, Kirby Smith, surrendered in Galveston.

Indeed, it wasn’t until August 20, 1866 — a full 16 months after Lee surrendered to Grant at Appomattox Courthouse — that President Andrew Johnson announced that the war was over. Having accepted the formation of a new government in Texas, Johnson declared that the “insurrection is at an end and that peace, order, tranquility, and civil authority now exist in and throughout the whole United States of America.”

For that reason, the question of “when did the Civil War end” can be a complicated one. The beginning of the conflict’s end certainly came on April 9, 1865, when Lee surrendered to Grant. But the end of the Civil War could also be measured by the war’s final battle on May 12th, or even Kirby Smith’s surrender on May 26th, or Johnson’s proclamation in August 1866.

Some might even say that the Civil War never ended — and that the deep divisions it sowed between North and South, Republican and Democrat, and Confederate and Union reverberate to this day. Certainly, the Civil War has touched, in one way or another, all chapters of American history since.