The History Of The First Lightbulb And Who Really Invented It

While Thomas Edison is credited with inventing the first practical incandescent bulb in 1879, the story of who invented the lightbulb is much more complicated.

Of Thomas Edison’s 1,000 patents, the very first lightbulb is not one of them. Indeed, Edison’s patent for the lightbulb was referred to as “an improvement” on existing models. In order to create a more practical, efficient, and affordable model of electric lamps, records show that the engineer purchased patents from previous inventors.

Determining when the lightbulb was invented and who invented the lightbulb is, therefore, a nuanced question and one that requires we acknowledge researchers and scientists working long before and at the same time as Edison.

So who invented the lightbulb, really?

Throughout the 19th century, inventors searched for a safer and more convenient method of producing light to replace open flames or gaslighting. Electricity became the favorite alternative. 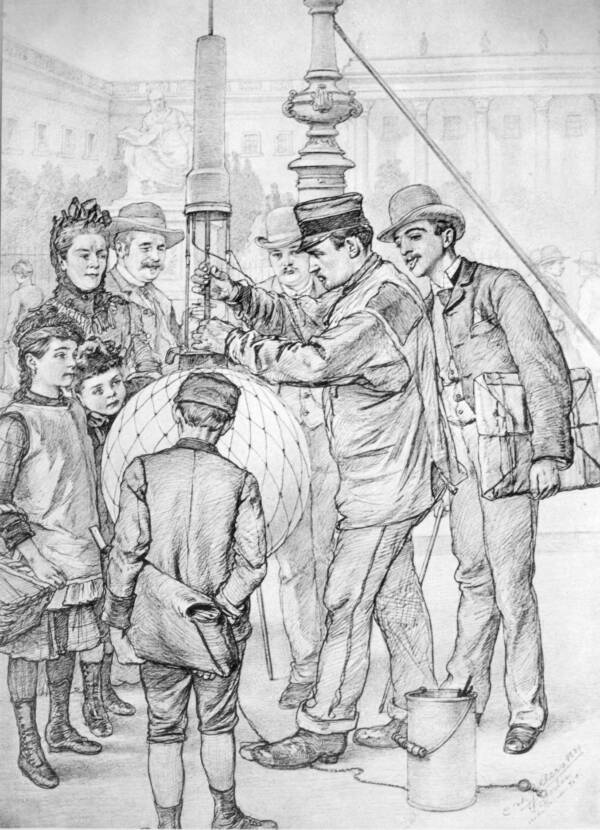 Wikimedia CommonsPeople watch the cumbersome process of changing the electrodes in a 19th-century electric arc lamp, one of the predecessors for the first lightbulbs.

One of the first devices to provide a reliable source of electricity was invented by the Italian inventor Alessandro Volta in 1800. The so-called “voltaic pile” was a primitive battery that employed copper, zinc, cardboard, and saltwater and when engaged with copper wire at either end conducted electricity.

The electrical measurement of “volt” was later named for Volta.

In 1806, English inventor Humphry Davy showed off the first electric arc lamp using a battery like Volta’s to produce a reliable current. These lamps generated light through open-air electrodes which ionized gas. But these lamps were also too difficult to use and burned too brightly and quickly for at-home usage, so they were employed primarily by cities in public areas. The arc lamp went on to become a commercial, albeit limited, success.

Scientists already knew that when enough electricity was passed through certain materials, they would heat up and if they got hot enough they would begin to glow. This process is called “incandescence.”

The problem with early incandescent bulbs, however, was that these materials would eventually become so hot that they’d burn up or melt. Incandescence could only become a practical, commercial success if the right material, called a filament, could be found to produce light without burning out too fast.

After a Scottish scientist named James Bowman Lindsay demonstrated in 1835 that constant electric light was even possible if the filament was made of copper, the next 40 years in lightbulb research centered around finding the right materials for a filament and enclosing the filament in a gas-less space, like a vacuum, or a glass bulb, to keep it alight for as long as possible. 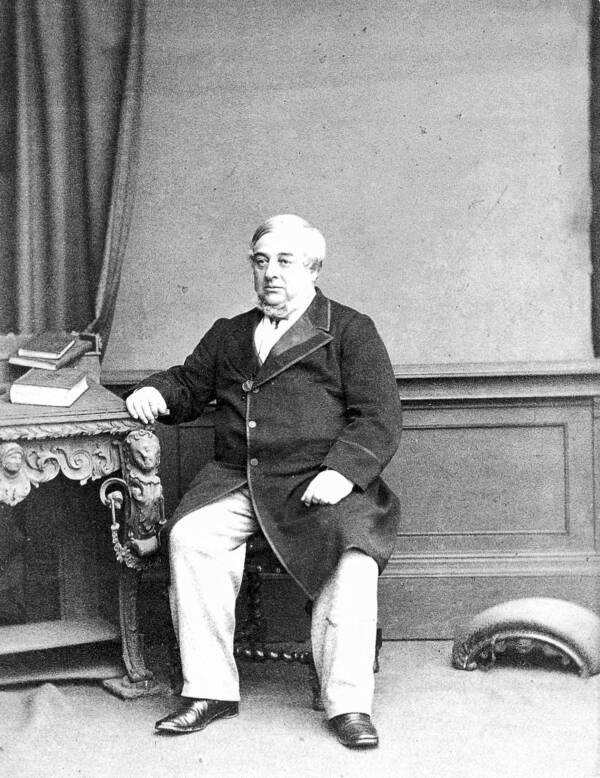 Wikimedia CommonsWarren de la Rue made a major breakthrough in the creation of the lightbulb decades before Edison’s model was patented.

The next major breakthrough in developing a commercial lightbulb occurred in 1840 by British inventor Warren de la Rue.

De la Rue figured that the best approach for a reliable, safe, and long-lasting electrical light was to use a platinum filament instead of a copper one fastened inside a vacuum tube.

De La Rue chose to use platinum as a filament because of its high melting point. Platinum could tolerate large amounts of electricity and glow without the threat of bursting into flame at high temperatures. He chose to fasten the filament inside a vacuum-sealed chamber because the fewer gas molecules that could react with the platinum, the longer its glow would last.

But platinum, then as now, was far too expensive to be manufactured commercially. Besides, vacuum-pumps were less efficient in de la Rue’s time, and so his model was not perfect.

The theory he employed for this lightbulb largely seemed to work, however, and so experiments continued. Unfortunately, these early designs were stymied by cost or impracticality as some bulbs glowed too dim or required too much current to glow at all.

How Joseph Swan Helped Create The Lightbulb As We Know It 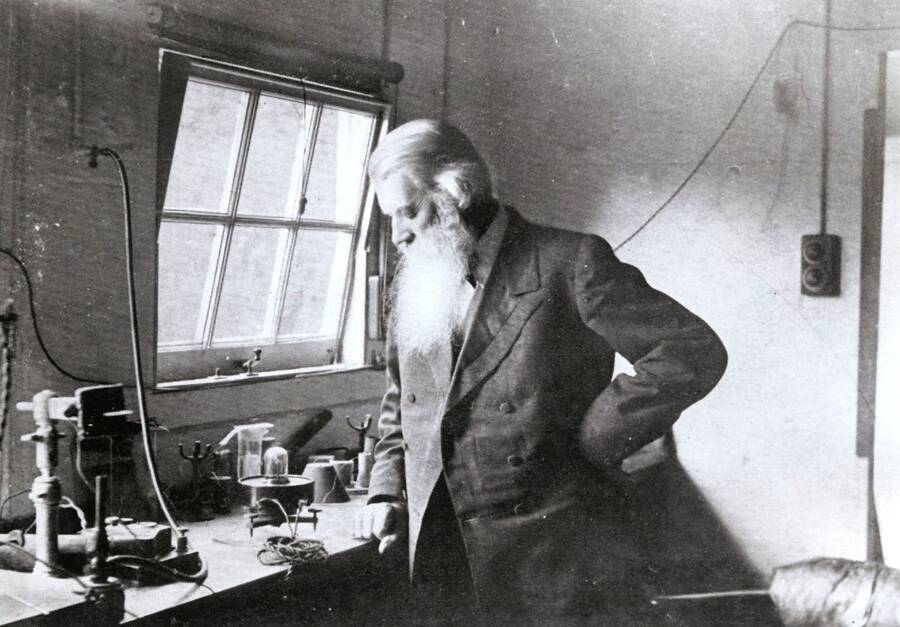 Wikimedia CommonsJoseph Swan was actually the first man in the world to have electric lamps installed in his home. Most of the components in his early 1879 model for the lightbulb were taken by Edison and used in his model, which Edison then patented in 1880.

British physicist Joseph Swan had studied the problems with incandescent lighting beginning with cost-effectiveness as early as 1850.

At first, he used carbonized paper and cardboard as cheaper alternatives to metal filaments but found it too difficult to prevent these paper filaments from burning out quickly. He later patented a design using cotton threads as filaments in 1869 but this design suffered from the same problems to be of practical use.

The 1877 invention of the Sprengel air pump would change the game in lightbulb development. The pump created better vacuums in glass bulbs which in turn prevented filaments from reacting to outside gasses and burning out too quickly.

Swan revisited his designs with this pump in mind and experimented with a variety of materials for the filament. In January 1879, he developed a lightbulb that burned but did not burn out using a cotton filament dipped in acid and vacuum-sealed in a glass bulb.

He demonstrated the design the next month but found that after a short time, the bulb smoked, turned black, and was rendered useless. Swan’s failure was in his filament: it was too thick and required too much electricity to glow.

But Swan nonetheless continued to experiment.

When Did Thomas Edison Invent His First Incandescent Lightbulb? 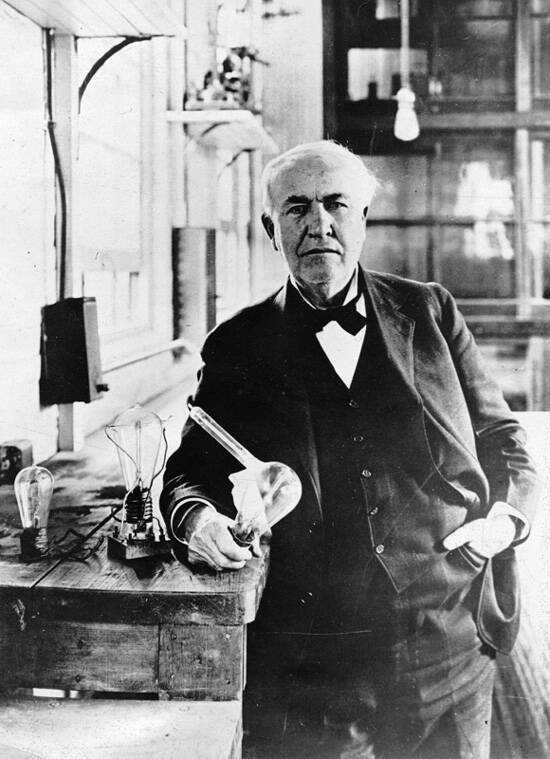 Wikimedia CommonsThomas Edison claimed to have tested over 6,000 different organic materials to find the perfect filament for his improvement on the incandescent lightbulb.

Meanwhile, Thomas Alva Edison was working across the pond to solve the same problems. The 31-year old inventor had 169 patents by that time and had established a research facility in Menlo Park, New Jersey.

Edison wanted to make incandescent lightbulbs both affordable and reliable, too. He studied his competition in this endeavor which naturally included Swan, and determined that a successful lightbulb needed a thinner filament that did not require a large electrical current.

Edison himself worked up to 20 hours per day testing and experimenting with various designs and materials for filaments.

In October 1878, just one year after Swan’s failed attempt, Edison developed a lightbulb with a platinum filament that burned for 40 minutes before burning out. It seemed that the so-called “Wizard of Menlo Park” was on the verge of inventing a practical lightbulb, but it too suffered the same problems as its predecessors.

Anticipating success, Edison borrowed $300,000 to establish the Edison Electric Light Company with J.P. Morgan as one of its investors. 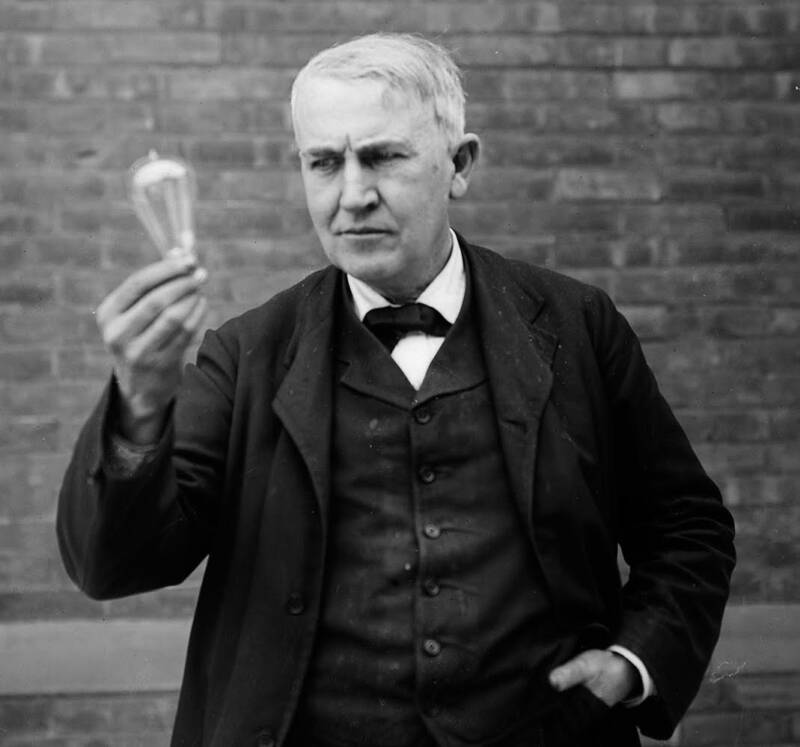 NPSEdison’s patented bulb contained many of the same elements as seen in Swan’s 1879 model.

Edison continued to test 300 different kinds of filaments in over 1,400 experiments. His team tested on seemingly any substance they could get their hands on including flax, cedar, and hickory. He even experimented on tungsten, which was common in later lightbulbs. But Edison did not have the tools to work this material properly.

When The Lightbulb Was Invented: The Historic Breakthrough 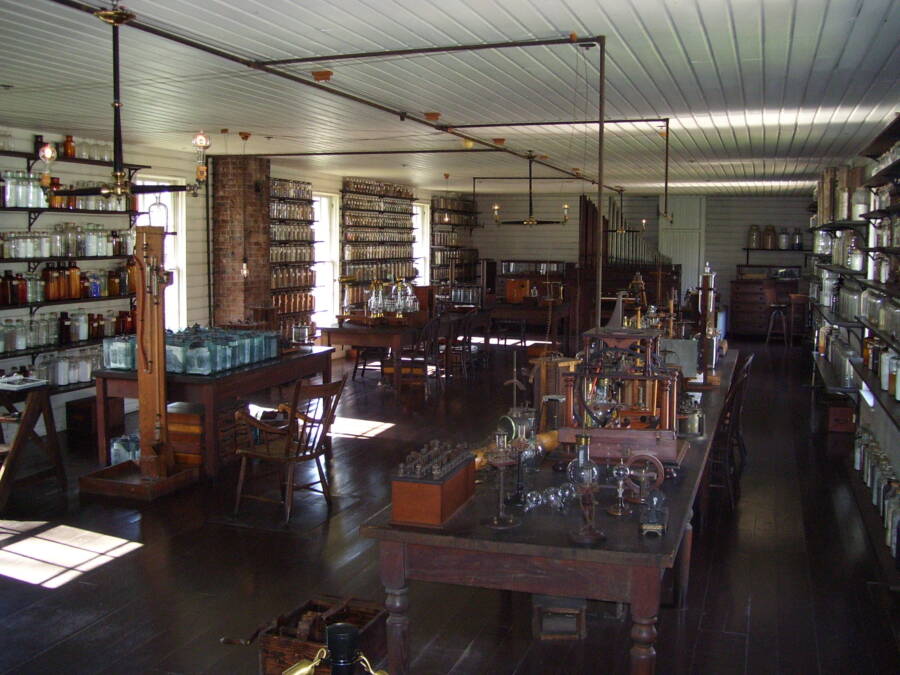 Then in October 1879, Edison settled on a thinner, higher-resistance cotton filament than the one Swan had used. He reasoned that the higher the resistance in the filament, the less electrical current would be required to make it glow. His 1879 design burned for 14.5 hours.

For his realization regarding high resistance, Edison is generally credited with having conceived of the first practical-use incandescent lightbulb. 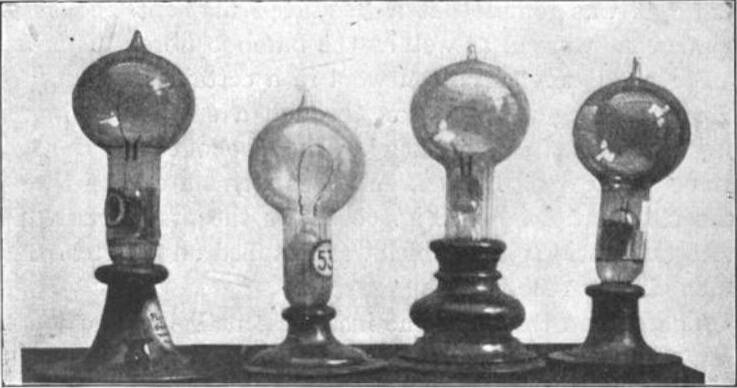 Wikimedia CommonsEdison’s incandescent lightbulb is considered to be the first for commercial and practical application.

Edison’s team would later use a filament derived from bamboo that glowed for 1,200 hours. He received a patent for this “improved” practical incandescent bulb on Jan. 27, 1880.

The year before, Edison had actually bought another patent for an incandescent bulb that had been created by Canadians Henry Woodward and Matthew Evans in 1874. Though this bulb successfully produced light, its design was different from Edison’s — it held its critical piece of carbon between electrodes in a cylinder filled with nitrogen — and it was ultimately not viable for large-scale commercial production.

After Edison got his own patent in 1880, Menlo Park staff continued to tinker and improve the lightbulb’s design. They developed better vacuum pumps and invented the socket screw that is common on most lightbulbs today.

Most significantly, Edison developed the infrastructure needed to make incandescent lighting a vital part of society. Edison and his team developed electrical plants to power homes at large and power meters to measure its usage. General Electric was formed as the result of an 1892 merger with Edison’s company. 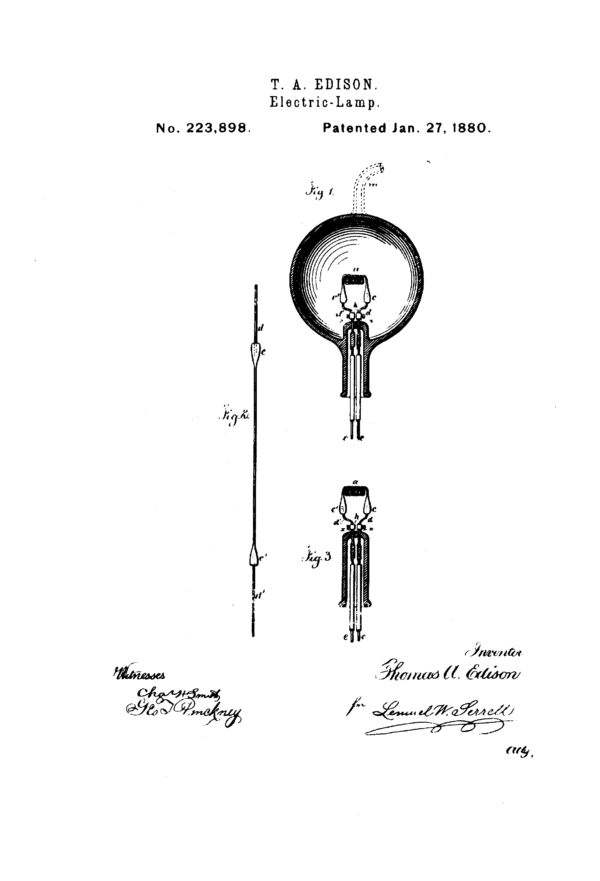 Wikimedia CommonsEdison’s design for a lightbulb as issued on his official patent.

After Edison, electric light became available from Broadway to the bedroom.

Ediswan And The Legacy Of Who Really Invented The Lightbulb

The same month that Edison developed his lightbulb, Joseph Swan announced he had perfected his own and obtained a British patent for it on Nov. 27, 1880.

Swan’s home was the first in history to be lit with electric light and he also was responsible for lighting the Savoy Theater 1881. This was the first time a large public building was lit entirely by electricity and demonstrated the superiority of incandescent light over gas light.

Swan then established the Swan United Electric Light Company in 1881 and Edison sued for copyright infringement. The British courts ruled in Swan’s favor and Edison and Swan merged their companies into Ediswan which allowed them to dominate the U.K. market.

Because of the new business relationship, Swan was forced to support the validity of Edison’s patents so to the public, Edison and the lightbulb became synonymous. Although he never escaped from Edison’s shadow, Joseph Swan was knighted for his achievements in 1904 and became a Fellow of the Royal Society. 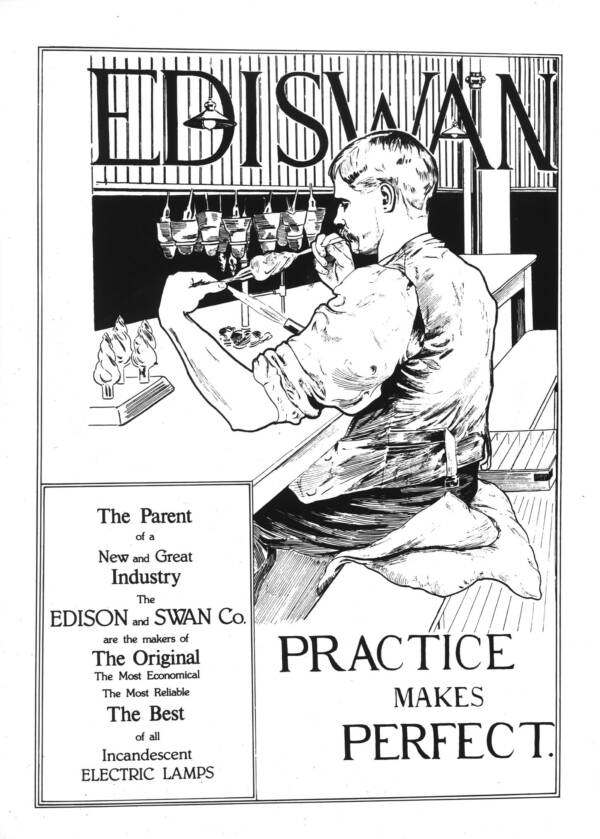 In the end, it is Edison who is best remembered as the inventor of the lightbulb, in part for his penchant for publicity and his determination to make the lightbulb a common household item. Swan’s own reticence for self-promotion and the fact that he had to publicly support the validity of Edison’s patents also helped to bring Edison to the forefront of public consciousness.

Certainly, credit belongs to Edison as it was his design and his electrical infrastructure that set the tempo for the world’s lightbulb as we know it today. At the same time, it ought to be recognized that Edison was but one among many inventors who worked to improve the lightbulb.

Perhaps it is fair to say that Edison’s genius was not so much in his innovation, but rather in his ability to apply practicality to inventions that otherwise may have just stayed in the laboratory.

Now that you’ve learned who invented the lightbulb, check out this article on six famous inventors who didn’t get the credit they deserved. Then, read this article on some of the eccentricities of the inventor Nikola Tesla.