After the Winterberg tunnel collapsed in May 1917, almost all of the German soldiers inside it perished over six harrowing days. 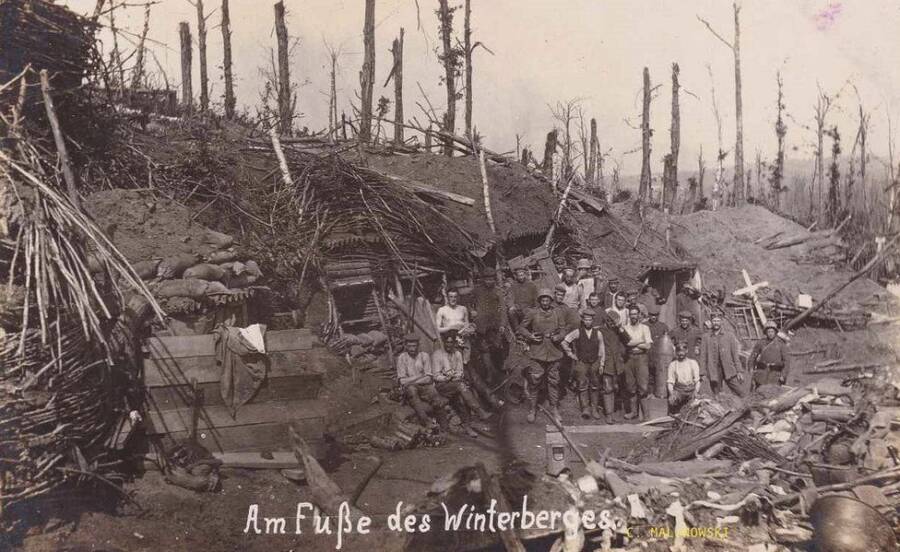 Pierre MalinowskiSoldiers at the notorious Winterberg tunnel, which currently lies under a forest trail popular amongst dog walkers.

In May 1917, more than 270 German soldiers were buried alive in the Winterberg tunnel on the Chemin des Dames battlefront when the French bombarded it, sealing off both sides. Now, that tunnel — and the corpses inside of it — have just been found by an amateur historian and his son.

According to The Irish Times, this disastrous collapse occurred during the Second Battle of the Aisne, when the French attempted to push back the Germans in the Spring of 1917. The German soldiers inside the tunnel belonged to the 111th Reserve Infantry Regiment from Baden.

However, after the war, neither French nor German authorities seemed eager to locate the Winterberg tunnel or the men entombed in it. As such, it remained lost to history until Alain Malinowski and his son set out to find it themselves. 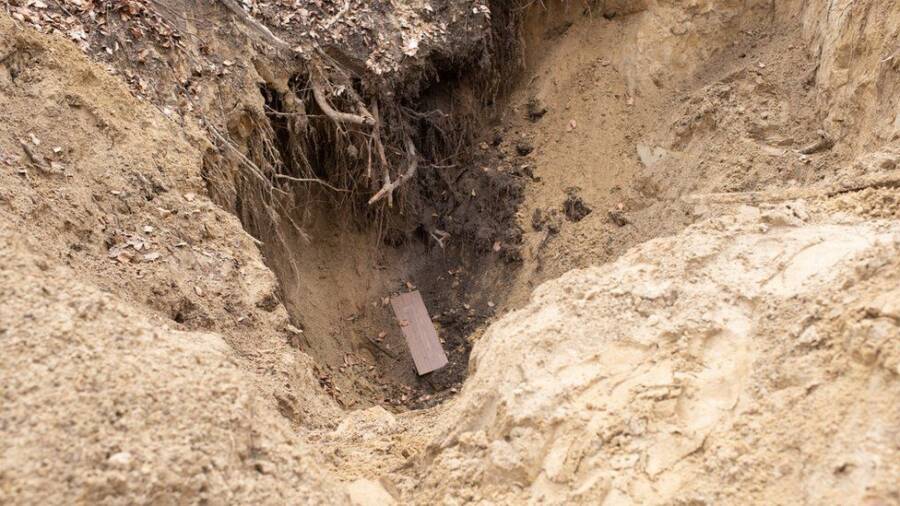 The amateur historian regularly visited the military archives in the Château de Vincennes and amassed a litany of maps, prisoner interrogation records, and descriptions over the next 15 years.

Finally, in 2009, Malinowski discovered a map that seemed to pinpoint the exact location of the tunnel. “I felt it,” Malinowski said at the time. “I knew I was near. I knew the tunnel was there somewhere beneath my feet.”

To his surprise, however, neither French nor German authorities again seemed interested in digging the tunnel up. So, in 2020, he and his son Pierre began to dig it up themselves — and found the entrance.

“It was like Pompeii,” one of their crew members said. “Nothing had moved.”

The duo unearthed hundreds of gas-mask canisters, two machine guns, a rifle, bayonets, a bell to sound the alarm, and the remains of two people. He reportedly covered the hole back up and then contacted regional officials. Ten months had passed without action from authorities, and so he went to reporters himself. 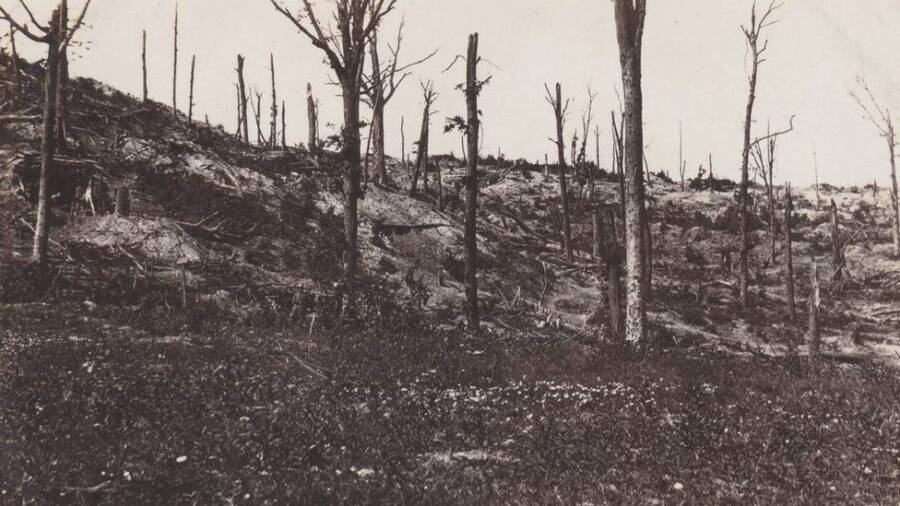 Pierre MalinowskiTree and foliage growth in the decades after World War I saw the tunnel obscured entirely.

Though no one has entered the tunnel yet, it is known that it is the final resting place for hundreds of German soldiers who became buried alive there when France bombed the entrances on May 4, 1917.

The explosion led the German ammunition shafts stored inside to explode. For six days, the troops inside suffocated or committed suicide. Miraculously, three men survived long enough to be rescued.

As one survivor named Karl Fisser wrote, “Everyone was calling for water, but it was in vain. Death laughed at its harvest and Death stood guard on the barricade, so nobody could escape. Some raved about rescue, others for water. One comrade lay on the ground next to me and croaked with a breaking voice for someone to load his pistol for him.”

“These were farmers, hairdressers, bank-clerks who came willingly to fight this war, and then died in a way that we cannot begin to comprehend,” Pierre Malinowski said. 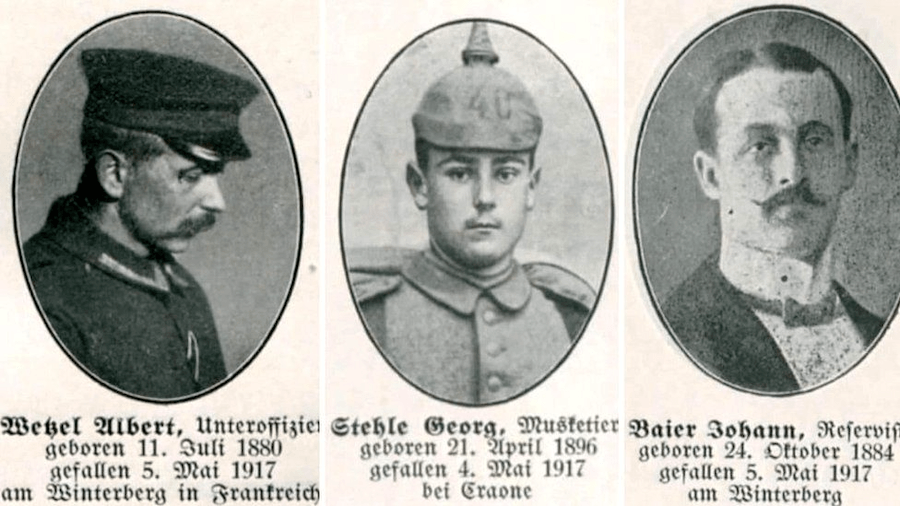 Hohenzollern Memorial Book 1914-1918Some of the fallen soldiers from the Winterberg tunnel have already been identified.

The Germans have often referred to World War I as the “forgotten war,” which perhaps explains this reaction from German War Graves Commission spokeswoman Diane Tempel-Barnett: “To be honest,” she said, “we are not very excited about the discovery. In fact, we find it all most unfortunate.”

Nonetheless, the Malinowski duo has forced both French and German officials to publicly consider excavating the soldiers’ remains. Historians have already tracked down the descendants of nine soldiers who died in the Winterberg tunnel.

Though French authorities claim the duo has broken the law in unearthing the historic site, Pierre Malinowski is adamant that it was the right thing to do. He hopes that authorities will decide to give these men a proper burial.

He theorizes that the soldiers will be found with all their personal belongings on hand, as these tunnels were where they lived throughout their time in the war.

He also believes they will be discovered “like mummies, with skin and hair and uniforms” still intact. He has thus far refused to provide the press with any photographs out of respect for the dead.

“Every soldier will have a story,” he concluded, “It will be the biggest ever reserve of human material from the First World War.”

After reading about the amateur archaeologists who discovered the infamous Winterberg tunnel from World War I, read a British soldier’s harrowing World War I diary that was discovered in a barn. Then, read about the 1914 Christmas truce that briefly paused World War I.