The Story Of The Gruesome And Still Unsolved Wonderland Murders

The Wonderland Murders have been unsolved for decades, though two people have been brought to trial — both of whom were acquitted.

When Alice fell down the rabbit hole and landed in Wonderland, she found smoking caterpillars, violent denizens, and a trove of body-altering drugs.

Of course, that was just a children’s tale, but the real-life Wonderland wasn’t far off: a drug house on Wonderland Avenue, high above the Sunset Strip, that hosted the seedy side of LA’s up-and-comers. 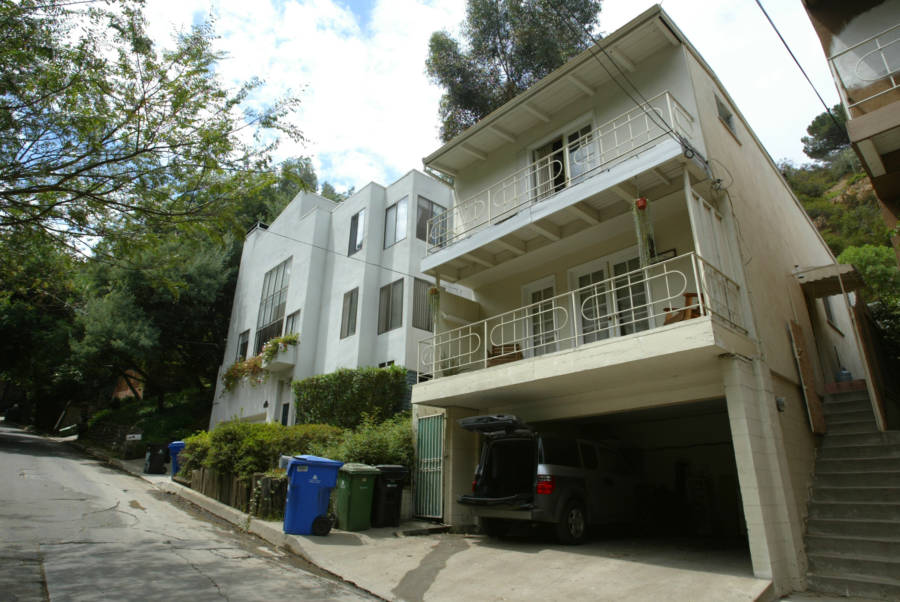 It housed hundreds of thousands of dollars in drugs, and, on a vengeful leader’s orders, became the scene of a quadruple homicide so bloody that it made the news for decades.

Today, 8763 Wonderland Avenue in Laurel Canyon is home to a neat little split-level with a carport, an iron-framework balcony, and a family with a minivan.

Nothing on the outside suggests that on July 1, 1981, four bodies were discovered there, so beaten and bloody that the LAPD compared them to the Tate-Labianca murders. 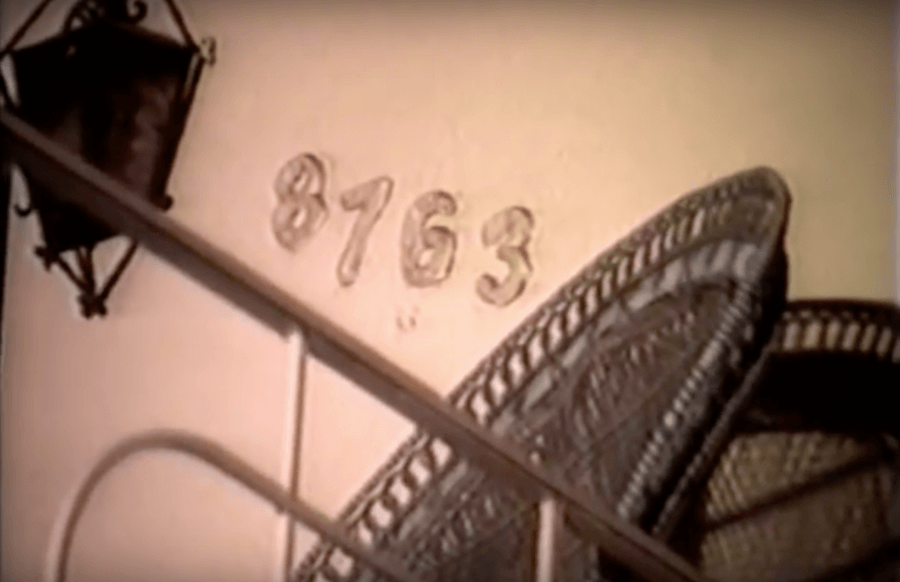 YouTubeA close-up of the Wonderland house’s address, taken by the evidence tech who processed the crime scene and filmed the Wonderland murder video.

The house on Wonderland Avenue was home to the members of the Wonderland Gang, LA’s most successful distributor of cocaine in the 1970s. Their growing operation had virtually cornered the market.

The property was officially leased in Joy Miller’s name, but it was home to a rotating cast of characters. Joy was a long-time heroin user who had fallen in with the gang after separating from her wealthy husband and Beverly Hills life. 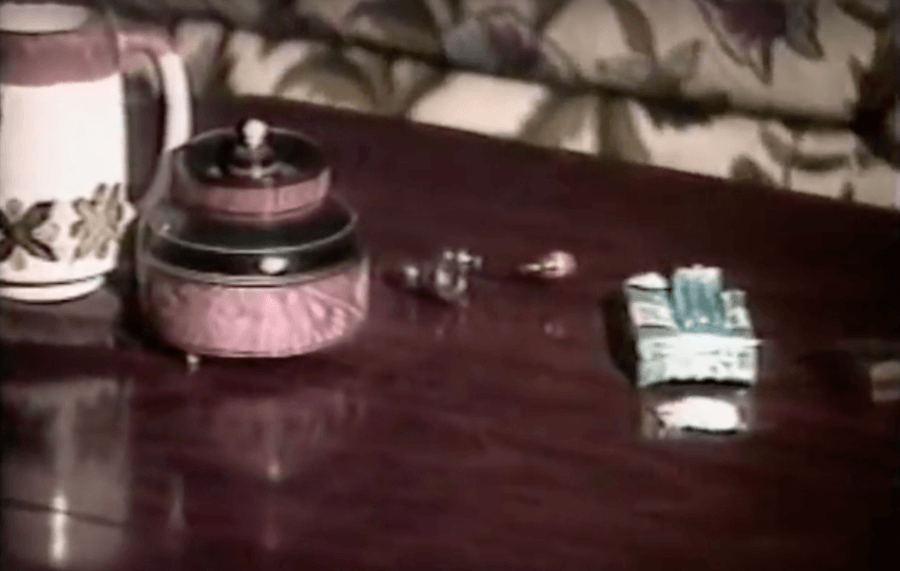 Joy Miller’s boyfriend was Billy DeVerell, the gang’s levelheaded second-in-command. Reports would later paint him as a reluctant criminal, one who regretted that his long track record of heroin abuse — and resulting arrests — made it difficult for him to find and hold other jobs.

There was nothing at all half-hearted about Ron Launius’s criminal enterprises, though. Launius was Wonderland’s king, and he was as cold as ice.

He had made a name for himself during the Vietnam War when he was dishonorably discharged from the army for smuggling drugs back to the United States in the bodies of dead servicemen.

Launius had already spent time in jail for smuggling and only narrowly escaped life imprisonment for murder when the prosecution’s star witness was killed in an accident. Police didn’t think they’d missed their chance, though; by the summer of 1981, Launius was a person of interest in as many as two dozen other homicides.

Ron Launius’s wife, Susan, also lived in the Wonderland house. A drug user like her husband, she largely absented herself from gang activities.

The most unusual member of the Wonderland household was John Holmes, the famous pornographer, who was a frequent guest and often purchased or mooched cocaine from the gang. 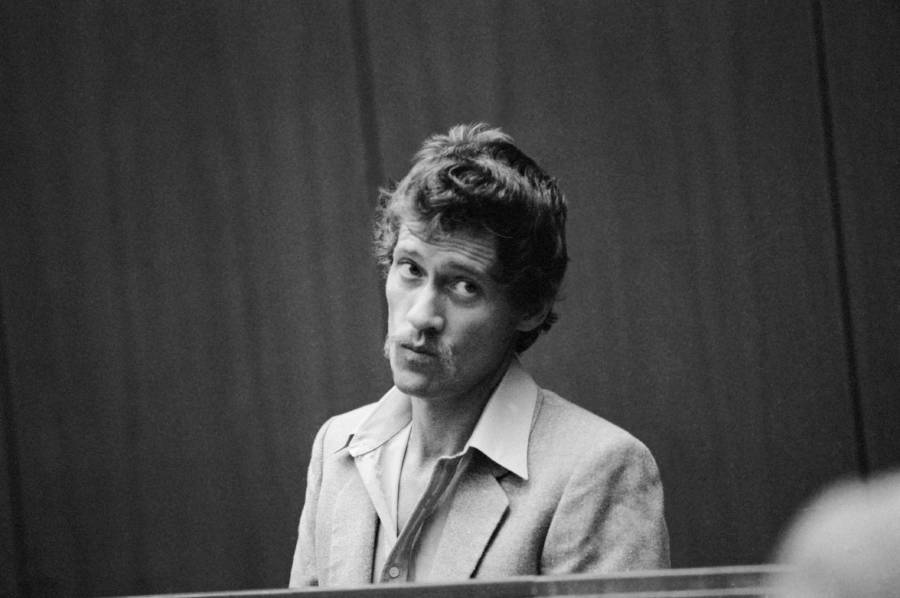 Bettmann/Getty ImagesPorn star John Holmes, who would later go to trial for the Wonderland murders.

Cocaine wasn’t the Wonderland crew’s only source of revenue. Heroin was their private passion and armed robbery their side gig.

Stealing from their rivals was both a source of income and an effective way to keep their competitors out of the game — until it backfired one terrible, bloody night. 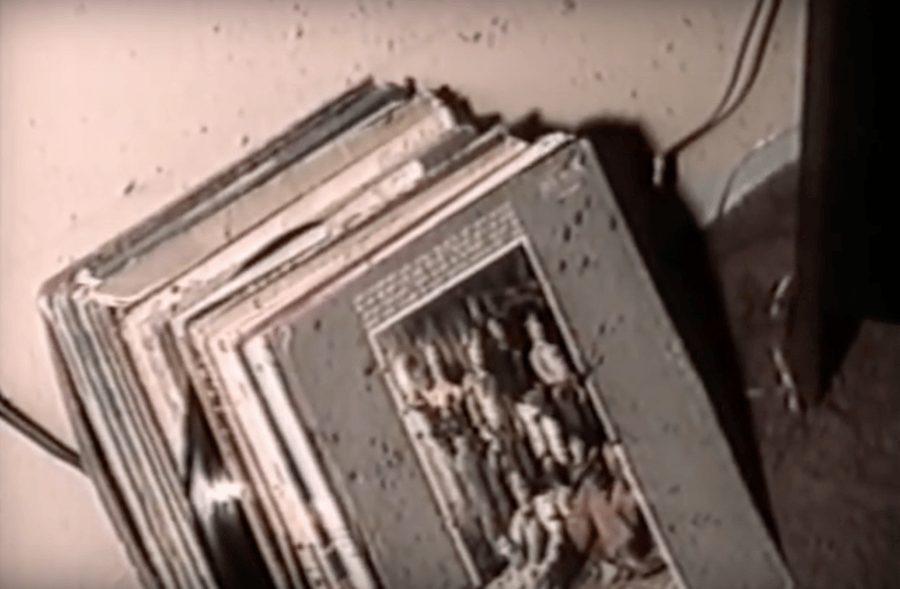 YouTubeThe violence that resulted from the Nash robbery left hardly anything in the Wonderland house free from bloodstains.

On June 29, several days before the Wonderland murders, four members of the Wonderland gang robbed the home of notorious club owner and gang leader Eddie Nash.

Launius and DeVerell, disguised as police officers, led fellow gang members David Lind and Tracy McCourt into the rival leader’s home, where they handcuffed Nash and his bodyguard, Gregory Diles.

During the robbery, as Nash was being made to open the safe, Lind accidentally shot and wounded Diles.

They walked away, unrecognized, with $1.2 million in illegal drugs, cash, jewelry, and arms — the latter belonging to a collection the Wonderland gang itself had sold Nash just days earlier.

Though police didn’t identify a suspect initially, Nash pointed fingers at several people he knew had been in his home the day of the crime.

At the top of his list was John Holmes, who had returned to the house three separate times just that morning — presumably, he suspected, to make sure the patio door by which the gang later entered was unlocked. 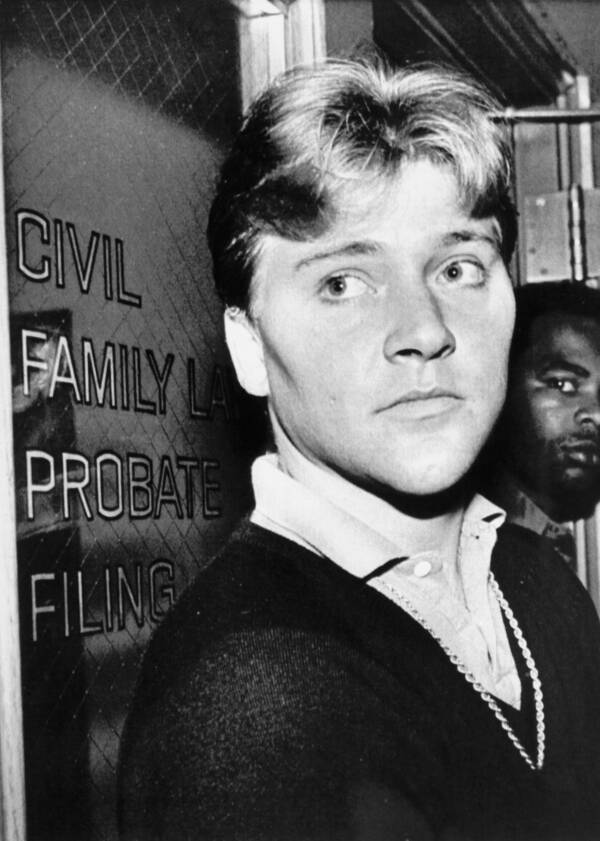 Bettmann/Getty ImagesScott Thorson at the age of 24 in 1983.

Scott Thorson, the former lover of Liberace, had also been present at Nash’s house. Thorson claimed that Nash had been so convinced that Holmes was involved that he had made his injured bodyguard track him down and beat the assailants’ names out of him.

Though Thorson’s claims were never corroborated, in all likelihood they were true. That’s because just two days after Nash allegedly beat him for information about the assailants, the perpetrators were found brutally bludgeoned in their home. 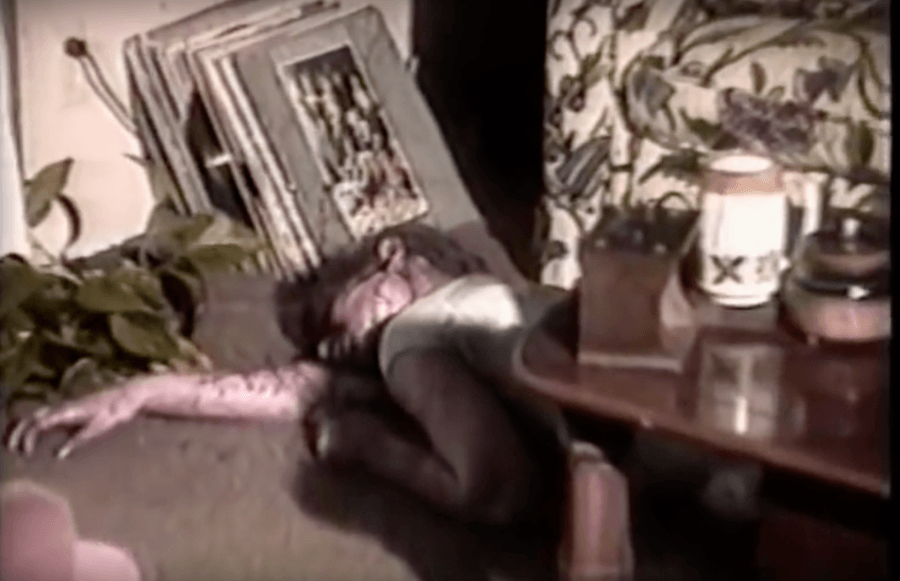 YouTubeCrime scene footage of Butterfly Richardson, found in a pool of blood on the floor in front of the couch.

At 4 p.m. on July 1, police received a panicked phone call from a pair of furniture movers. As they’d been working at the house next door to 8763 Wonderland, they’d heard desperate, pained moans coming from the drug house.

Investigators met with a horrible scene.

The body of Barbara “Butterfly” Richardson, David Lind’s girlfriend, was lying on the ground near the couch she had been sleeping on, covered in blood.

Joy Miller was found dead in her bed, while DeVerell’s body was slumped at the foot, leaning against the TV stand. A bloody hammer was tangled in Miller’s sheets, and several metal pipes littered the floor.

In the neighboring bedroom, Ron Launius was dead, bloodied and beaten almost beyond recognition. 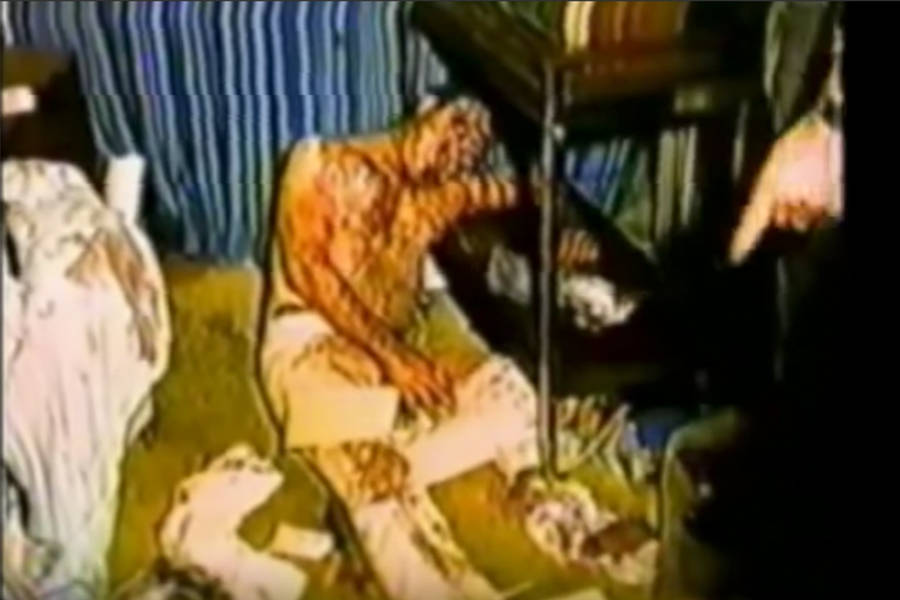 Perhaps the most horrifying sight was Launius’s wife, Susan. She was found covered in blood on the floor next to the bed that held her dead husband’s body, her skull bashed in — but, miraculously, still alive.

The moans that the moving company had heard had been from her.

Though she’d survive the attack and make a full recovery, the brain damage she sustained left her with permanent amnesia, unable to recall the events of the Wonderland murders. 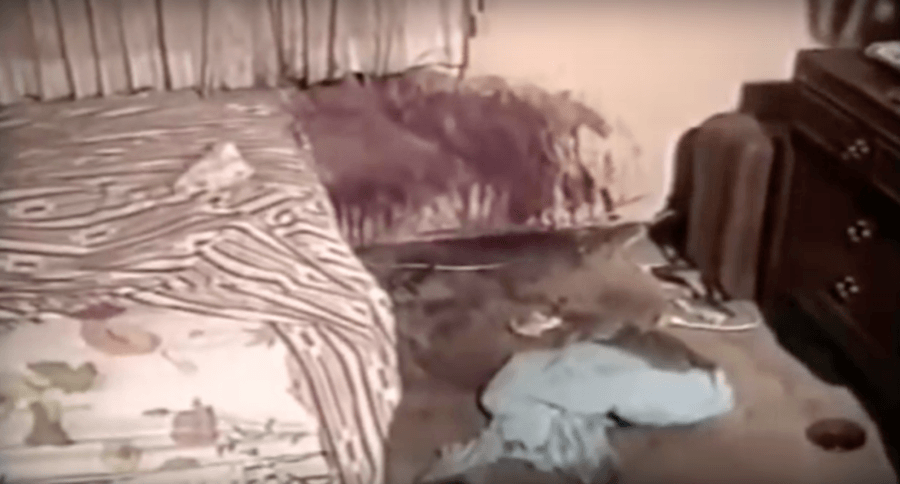 YouTubeCrime scene footage showing the bloodstain in the bedroom of Susan and Ron Launius. The blood is Susan’s.

The police searched the home and interviewed neighbors, who later admitted that they had heard screams in the early hours of the morning, around 3:00 a.m.

Given that the house had a reputation for loud and disruptive behavior at all hours, the neighbors had just assumed the gang was having a party and hadn’t bothered to call the cops.

Susan Launius had been lying on the floor alive, with her skull broken, for more than 12 hours.

Investigators Puzzle Over The Wonderland Mystery 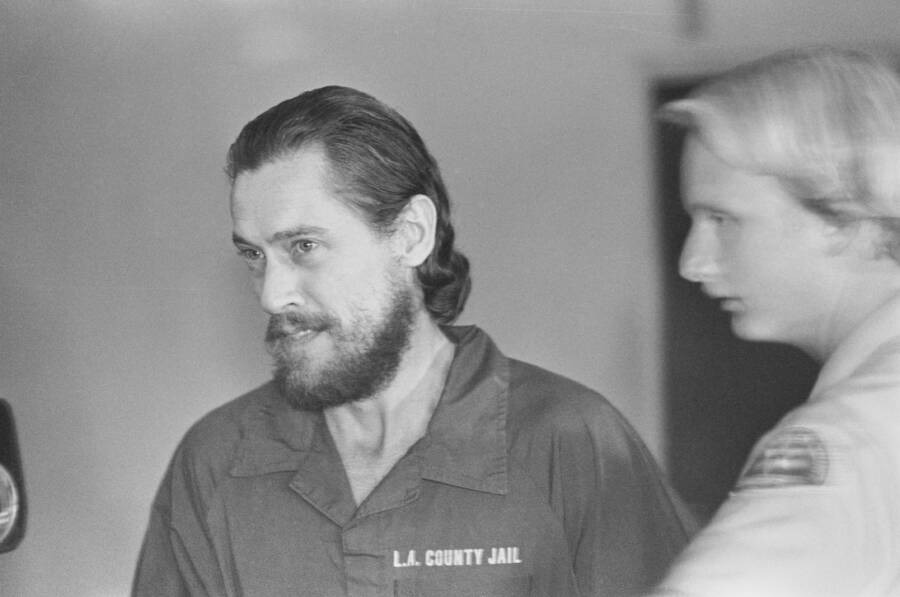 The police search — documented in the gruesome Wonderland murders video — revealed a bloody handprint on the headboard above the dead Ron Launius.

It belonged to John Holmes, who was arrested and charged with four counts of murder. The prosecution argued that he had retaliated against the Wonderland gang after feeling slighted by the division of the spoils from the Nash robbery.

The graphic Wonderland murders video is recorded and narrated by an evidence tech, who moves through the scene and makes note of blood splatters, body positioning, and evidence of ransacking in the Wonderland house.

Bribed with drugs by the Wonderland gang to unlatch the Nash hideout door — a mission that took several trips — Holmes had made himself a target for Nash, who believed he was a Wonderland accomplice.

Nash’s men beat Holmes until he agreed to let Nash’s men into the Wonderland house.

Holmes was acquitted, though since he refused to give any evidence during his trial, he ended up serving 110 days in jail for contempt of court.

Attention next turned to Nash.

Suspecting Nash had murdered the gang for revenge, police questioned and eventually arrested the rival drug dealer. Charged with planning the murders, Nash was saved by a hung jury: just one juror stood between Nash and a guilty verdict. 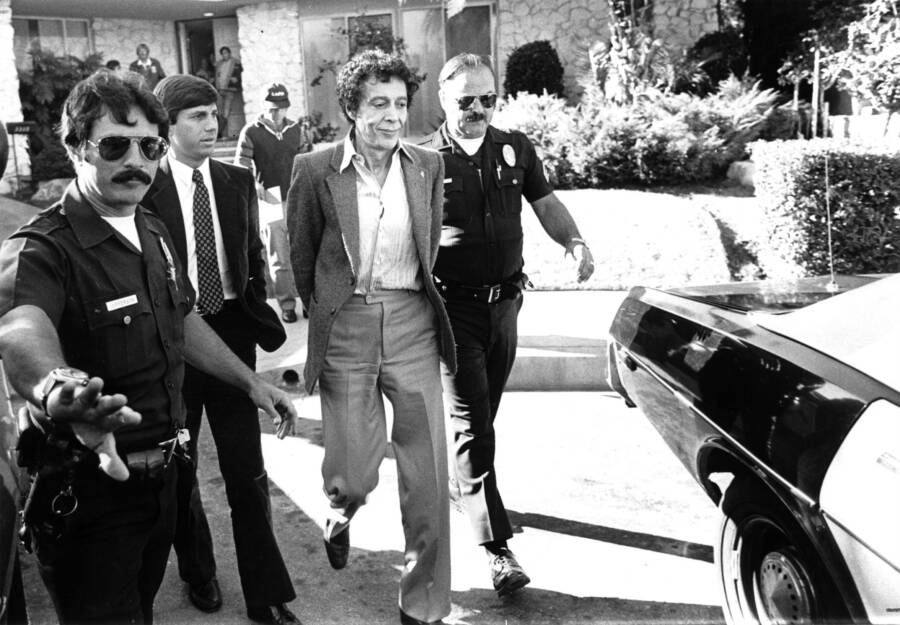 Boris Yaro/Los Angeles Times via Getty ImagesEddie Nash was arrested in a 7 a.m. raid on his Laurel Canyon home.

Nash walked free until 2000, when he was charged with drug trafficking and money laundering. As part of a plea deal, he admitted to having bribed the single dissenting juror in the original trial.

He also confessed to commanding his men to repossess the stolen items in the Wonderland house on the night of the slayings — though he never admitted to having ordered the murders.

Today, the Wonderland killings are remembered as one of Hollywood’s most gruesome moments — a horror story whose images and video have continued to haunt long after the bodies were buried.

After reading about the Wonderland Murders, check out the unbelievable true story of the Lizzie Borden murders. Then, find out where the members of the Manson Family are now. Finally, check out some of the most famous murder stories of all time.