Zaqistan, The “Country” You’ve Never Heard Of That Exists In The Middle Of Utah

Angered at then-President Bush's foreign policy in Iraq, one artist decided to buy a plot of land on eBay...and found his own country called Zaqistan. 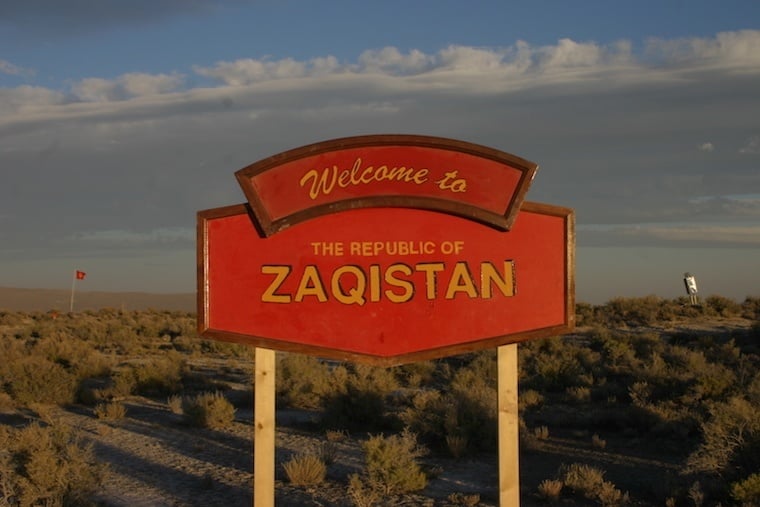 Welcome sign in Zaqistan. Photo Courtesy of the Republic of Zaqistan.

It was the summer of 2005, and New York-based artist Zacharias (Zaq) Landsberg was talking with some friends about cheap land for sale on eBay. As a Californian who had traveled all around the American southwest, he figured he should “own a piece of the American West before it is all gone.” Landsberg bid $610 for a plot and forgot about it. A few days later, he was notified that he had won four acres of inhospitable desert in Utah.

After a brief visit with friends a few months after, he declared it the United Republics of Zaqistan — now simply the Republic of Zaqistan — and began the process of creating his own country. This is the exclusive interview that ATI had with Landsberg on his unorthodox project:

You have four acres of land in Utah. Why build a country instead of a house?

2005 was a dark time politically. It occurred to me that I could and should do better than the Bush administration’s incompetent foreign policy. It started like a cheap project, an anti-Bush joke thing. The idea was to look at something from a different point of view.

It is now 2016 and the Bush administration is long gone. Do you still need your own country?

I studied abroad in India in 2006. I was living with some Tibetan exiles and told them about my project. They thought it was the funniest thing they had ever heard, and I granted them citizenship certificates. They told me it was the only country they held citizenship to…I realized my kind of arty-jokey thing intersected with this very dark political reality. Zaqistan took a more serious turn from there: I have a bunch of official looking papers, a website and other things attached to it — how much of that is real and how many people take it as real before really looking at it?

Have you tried to travel with your Zaqistani documents? 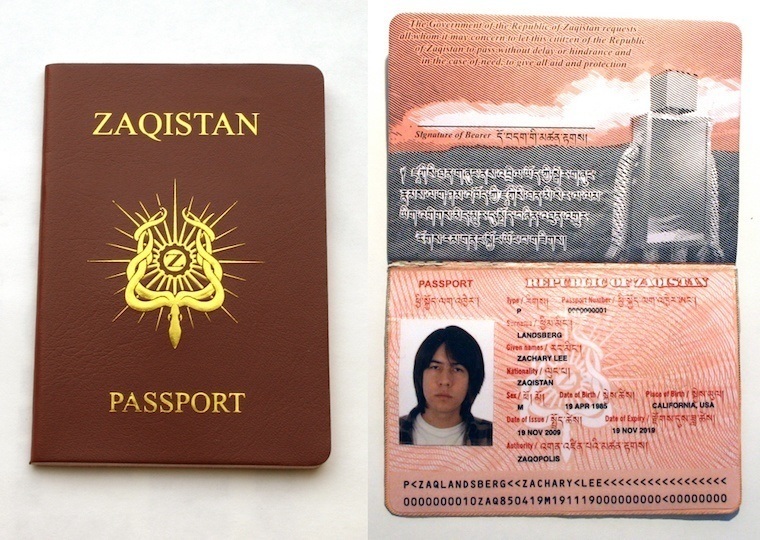 What about the symbol on the passport? Who created it and what inspired it?

I created it. It’s a giant squid. One of the things of making the country is the flag, and the symbolism, and that goes back to the mindset, “I feel that the country is so small, so I need to overcompensate with a huge animal: a giant squid.” There is also a sunrise that represents this idea that the sun rises in Zaqistan and sets in the U.S., the closing of the American Empire and the dawning of a new entity.

You hold a U.S. passport, and you pay U.S. taxes on the land. As a U.S. citizen, which things from the U.S. would you like to keep in a future Zaqistan?

When people ask me, I make an effort to try not to make shit up. Usually there is like five of us there at a time, so the laws are very simple, like resting midday because it is too hot. Also, I try not to really take major stances on U.S. politics, like who does Zaqistán support on the elections. I’m interested in Zaqistan in the sense that it works politically as people project into it. I feel like a lot of right-wing libertarian people are into it, but also a bunch of left-wing, no-borders-man people, and that’s OK because it collects both viewpoints. 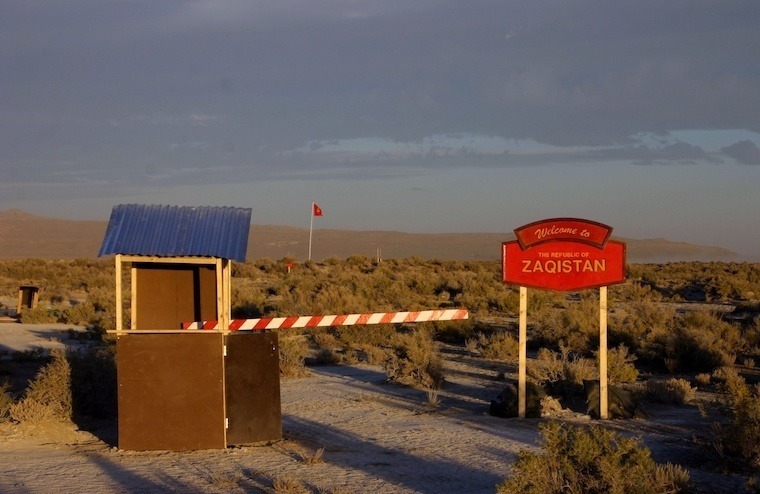 Border control. Photo Courtesy of the Republic of Zaqistan.

You have already accepted petitions on citizenship. Who can become a citizen?

Pretty much whoever applies.

Most people would qualify this idea as insane. How would you convince them otherwise?

Paying a mortgage, commuting from the suburbs, working 40 hours a week and then going home for the weekend, I think that’s insane! Zaqistan is a slow news story, in a way it’s crazy, and it does have a little heavy-handed message. I see my Tibetan refugee friends, who are literally no part of any other state than my weirdo little arty project, and that’s just tragic, and many people in the U.S. don’t understand that. 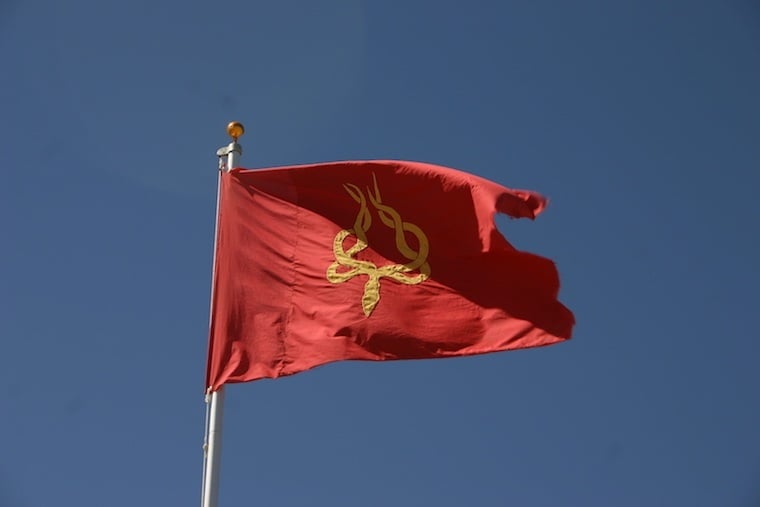 The flag of Zaqistan, which its giant squid. Photo Courtesy of the Republic of Zaqistan.

Since the project is going very slowly, what are your plans short-term?

In the way of becoming a nation, our attempt would be to create relationships with other nations, but that’s probably not going to happen. On the infrastructure front, the next step is to build a small structure that might have a roof and collect a little bit of water, so we can stay there a week, instead of a couple of days. Now we just camp. We want to get to a point where people can get there year-round. 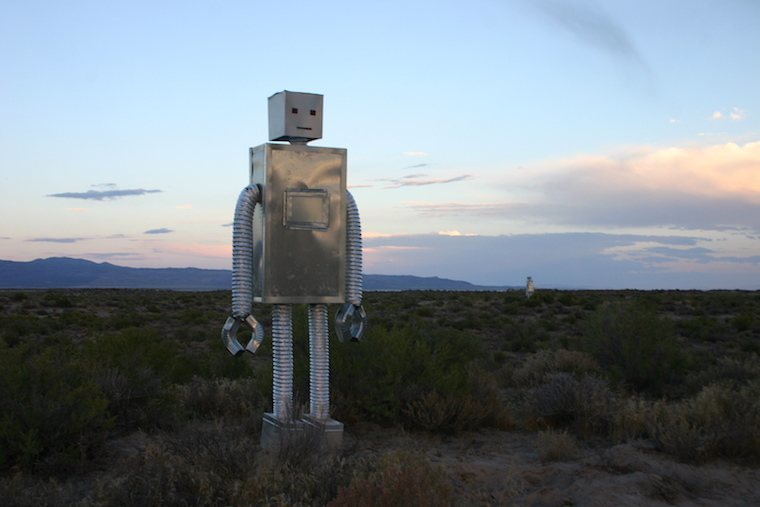 One of the art installations that Zaq has set up in the desert in Utah. Photo Courtesy of the Republic of Zaqistan.

What’s the longest you’ve been there?

Five days in a row, but we had to leave and come back with more supplies.

If Donald Trump offered to build a hotel in Zaqistan in exchange for tax haven treatment, what would you say?

What if it was another chain offering to build a resort there, a fun place to go for a weird vacation?

I would potentially be into that. I like the idea of the weird vacation. 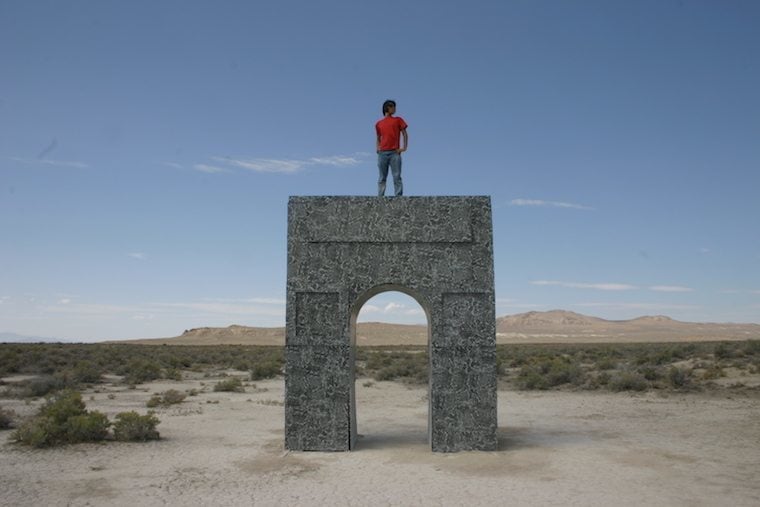 Another art installation in Zaqistan. Photo Courtesy of the Republic of Zaqistan.

Is Zaqistan as a country going to “happen,” or will it remain as an art project?

I would like to say that it’s going to happen someday, but that day is very far off.

100 years, I’m not probably going to see it myself. The way I would explain it, it’s like Stephen Colbert’s Super PAC. That wasn’t fake, he did the thing and went through the motions to see what you had to do to do it. So I am building a country, but it’s going very slow. 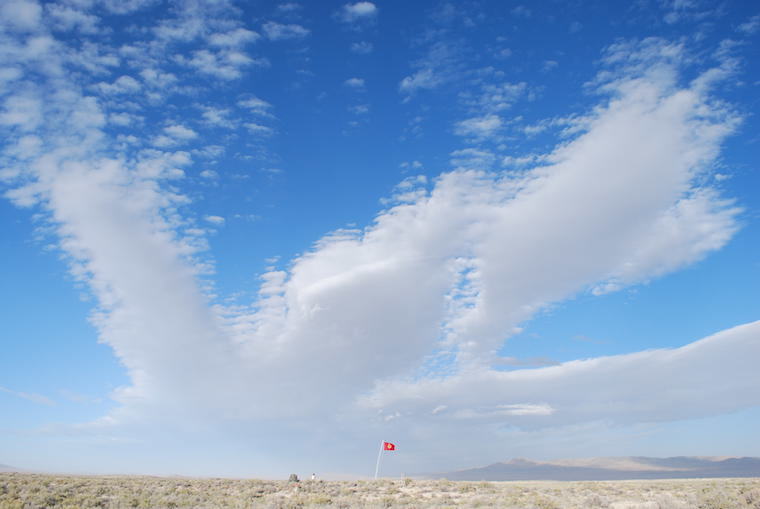 Zaqistan, in the middle of the desert in Utah. Photo Courtesy of the Republic of Zaqistan.

So far, the borders of Zaq’s fledgling “country” are still 50 miles from the nearest gas station, and his land lacks any access to water. But for Zaq, something interesting is happening in this patch of dust. As he puts it, “the reality exists somewhere in between an art project and a defective sovereign nation.”

Liked this? Meet the Virginia farmer who became the King of North Sudan or read an interview with the President of Liberland, a tea party paradise in Eastern Europe.