Trying to lose 30 pounds that just won't go away? For one man, the answer wasn't diet and exercise. 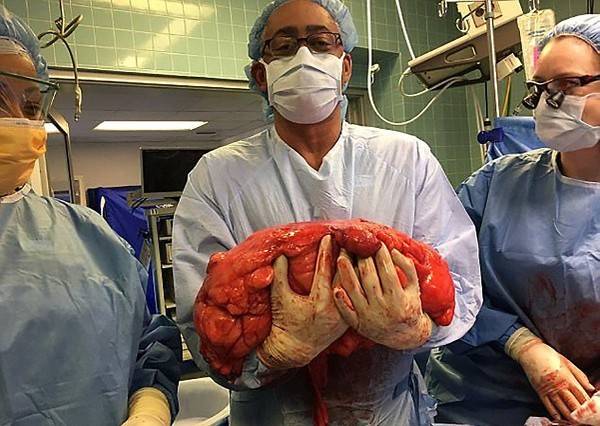 It was weird that Kevin Daly managed to lose over 30 pounds, but still couldn’t get rid of his massive beer belly. It was even weirder that Daly wasn’t a big beer drinker.

“For a second I was vindicated, and then I was completely panicked because when a doctor says that you have an extremely large mass, you assume that you have a cancerous tumor growing in your stomach,” Daly said.

Daly, from Hoboken, N.J., lost 34 pounds after undergoing open heart surgery in 2015. Daly is over six feet tall, 62 years old, and considers himself an athletic guy. After his frustration at not being able to get rid of the extra weight reached its boiling point, Daly went for a CT scan after fighting his insurance company to authorize one. The scan revealed that growing in his stomach was a huge cancerous mass taking up most of his abdominal cavity.

The tumor is called a liposarcoma and it grows in fat cells. They usually form in muscles in the limbs or, in Daly’s situation, in the abdomen. They can also spread to surrounding tissues or organs in the body and are considered malignant.

Daly’s tumor had probably been growing for around 10 to 15 years. Since it hadn’t spread though, it didn’t affect Daly’s overall health.

Daly saw Dr. Julio Teixeira at Lenox Hill Hospital in New York. “Although these tumors are large and malignant, they grow slowly and tend to not metastasize,” Teixeira said. “Often there’s a very good prognosis.”

A surgery to remove the tumor was scheduled, though surgery can be tricky when the liposarcoma is in the abdomen because it can grow near vital organs. In Daly’s case, the tumor had wrapped itself around one of his kidneys. The surgery took over four hours to complete and the strength of two residents to hold it up as Teixeira cut it out with painstaking precision.

In the end, the surgery was a success. The 30-pound tumor was removed, as was the kidney that it had enveloped. Teixeira said it was the largest tumor he’s ever removed.

Liposarcoma is a rare type of tumor; it’s estimated that only 13,000 sarcomas will be diagnosed in 2018. Liposarcomas are just one type of sarcoma.

Daly is now feeling great and won’t be needing chemotherapy or radiation. He will, however, be monitored with regular MRIs. Just in case.

If you found this article interesting, you may want to read about the man whose tumor turned out to be a Playmobil traffic cone. Then you can read about the doctors who removed the world’s largest brain tumor.