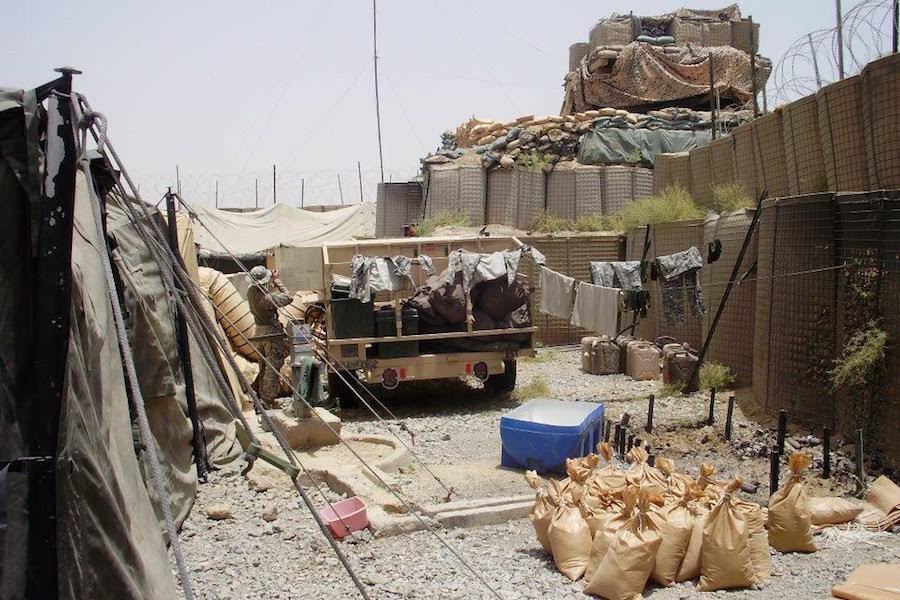 The squalid outpost in Kandahar, 2010.

“The guy who flew the Raven came into the tent and said something to the effect of, ‘Uh, guys, I fucked up,’” laughs Linehan. The soldiers knew that they would have to go out into the field to retrieve the drone. “It’s not technology we want the Taliban to have. I don’t know what they could do with it — it might just have been that it was expensive,” he admits. “It certainly didn’t seem like something worth risking our lives for, it’s like a little toy!”

The soldiers rallied up a small patrol of around 10 men and headed out the front gate of the outpost. “It was only 200-300 meters [to the Raven], and in the middle of the day,” says Linehan. “We didn’t expect too much to happen.” All was quiet as the patrol approached the drone, retrieving it successfully. But as they attempted to return to their base, all hell broke loose as they were swiftly ambushed by the Taliban.

“This fucking RPG whips in, looking like a football, and explodes.”

“We were strung out in a line, myself and the radio guy out front. I’m near the gate, when suddenly, rounds start whipping in as a handful of machine guns open up from somewhere in the village.”

In the middle of a field with no protection, everyone immediately threw themselves to the ground, scrambling for cover behind the knee-high stone walls. Mere meters from the safety of the base, Linehan knew there was no way he could duck inside and leave the rest of his team exposed.

“It’s against protocol – I’m the medic, I can’t just hang inside,” he shrugs. Instead, he turned back to his teammates, charging headlong into the hail of incoming fire. “I’m running for cover and there are bullets whipping all around me. It was so surreal, because I’d never been really shot at like that before. I was running faster than I’ve ever run in my entire life.” Racing to cover, Linehan dived behind a wall just as an RPG rocketed towards their position.

“This fucking RPG whips in, looking like a football, and explodes,” he says. “We were all ducked down in the middle of the field and it exploded right behind us, it was a pretty well-aimed shot. I remember hearing it — whoomph — then the explosion lit up and I remember seeing shrapnel blowing through the air. I remember realizing, this is serious, this isn’t a game — whoever is shooting at us is shooting to kill us. When you see an RPG come in, it’s very real, that’s a deadly weapon.”