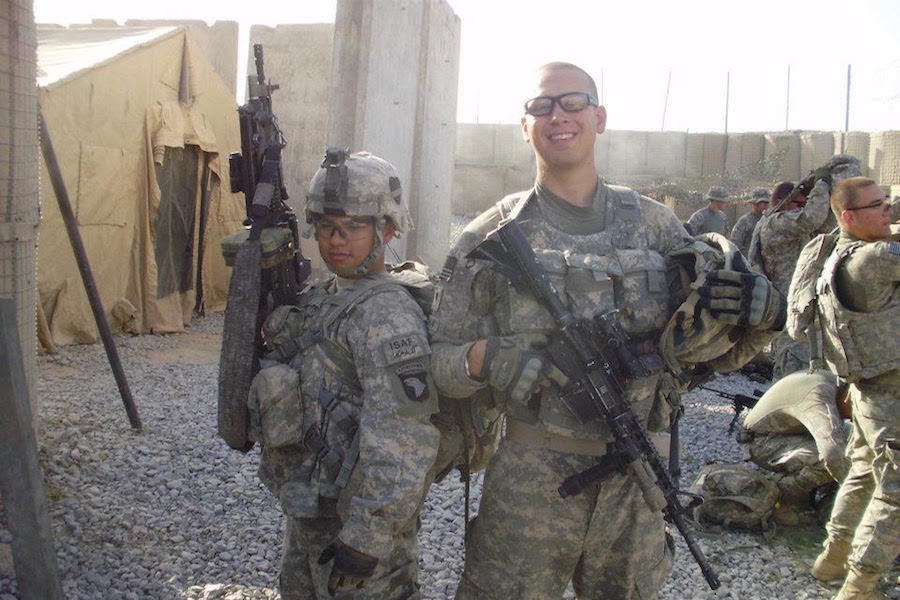 With most of those present inexperienced in combat, the situation quickly became chaotic. “There were bullets kicking up everywhere, around everyone’s feet. You can hear bullets snapping past your ears. I remember thinking, ‘Holy shit, how isn’t anyone getting shot right now?’” says Linehan.

“It was a very confusing situation — the majority of us hadn’t been in a firefight at that point, so for most of us it was scary. I remember looking over at one guy and he had his pistol out and was shooting it sideways over a wall like in the movies. I’m like, ‘What are you doing?!’ It was a shit show. But it was a nice introduction to being a soldier, I guess.

“We didn’t really know where to shoot, so we were all shooting in wild directions. Eventually we spotted them — two Taliban dudes went to jump over a wall and my buddy, who was a 240 gunner, laid one of them down. I remember one young Afghan soldier, who was about 18, was still just shooting randomly at this village over to the right. I’m like, ‘What the fuck are you doing, man? The Taliban’s over there!’ He just looks at me and starts laughing and kept shooting into the village. I was like, ‘This is why we’re losing the war.’”

“I remember thinking, ‘Holy shit, how isn’t anyone getting shot right now?’”

With helicopter support unavailable and mortar support missing their target, the patrol remained pinned down. Knowing that night was approaching, the group radioed the base for a last ditch escape attempt. As a truck-mounted .50 Cal machine gun laid down suppressive fire, the group ran desperately for the next available cover — a small canal that led back to the outpost.

“We had to run about 100 meters, and as soon as we popped up, the shots started coming in again,” says Linehan. “We ran to the canal and jumped in — and landed in a river of human feces.”

The canal, it turned out, was the one used for emptying the outpost’s latrines, and it had been put to use just hours before. “It was all fresh shit!” laughs Linehan. “We were just, like, fuck. We had to run through it, splashing through up to our knees, then crawl out at the point nearest the gate to the outpost. There was no hesitation — it’s just a flight response, you don’t think about anything.”