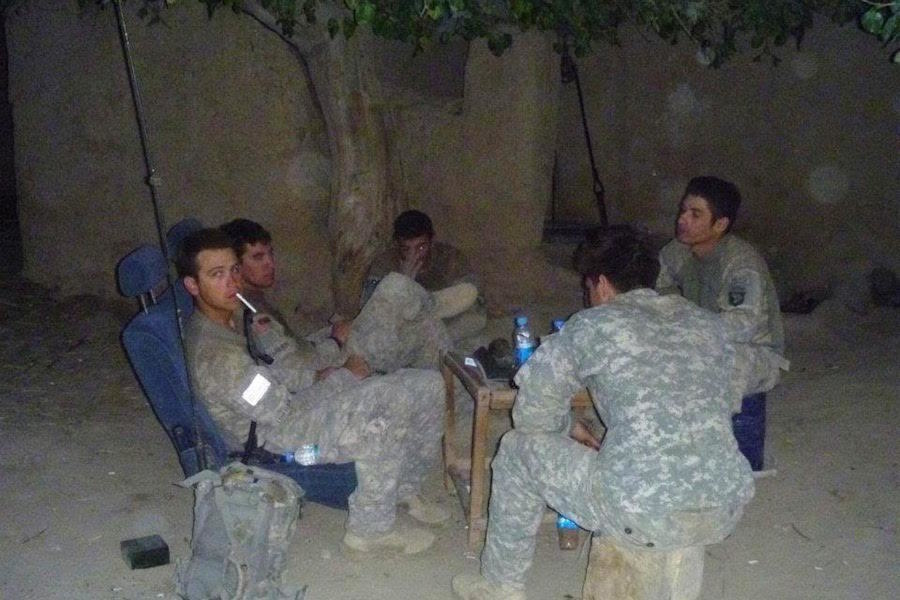 Linehan and his fellow soldiers attempt to pass the time in the desolate base.

Incredibly, the entire group made it back to the base without injury, although by then there were other issues. “We were all covered in shit. We didn’t have showers or anything. There was a well on the base, but it was contaminated with E. coli, so we were very hesitant to use it. We doused our stuff in the well, but our tent smelled pretty bad for a while after that. We were like, welcome to Afghanistan, I guess.”

Despite being his first (and far from his last) firefight, it would be a long time before Linehan was able to process the experience in a rational way. “They say combat is addictive and I honestly believe it,” he says. “I remember going to bed that night thinking, ‘I can’t believe I just had that experience. I’ve now done what soldiers are supposed to do, I’ve crossed that threshold.’

“There are so many things within military culture, even American culture, that reinforce the idea that, that’s the ultimate experience, so when you’re there, you’re willing to do things just to embrace that experience. It’s not right after a firefight that you start to feel like, ‘What the fuck was I doing?’ It’s a year later. It was six years for me, before I was thinking, ‘What was that? How did I like that?'”

Check back next week for another entry of “What Happened When,” our series of incredible stories told by the people who lived them. For now, read the story of Wasil Ahmad, the 11-year-old Afghan police commander recently killed by the Taliban. Then, see this heartrending collection of Syrian Civil War photographs.