Following in the footsteps of British occultist Aleister Crowley, Anton LaVey founded the Church of Satan with an impressive talent for showmanship.

In 1966, a young American occultist named Anton LaVey founded the Church of Satan in California. While the name of his church alone was controversial, that was just the beginning.

Following in the footsteps of controversial British occultist Aleister Crowley, LaVey used theatricality to promote his church — to huge success. 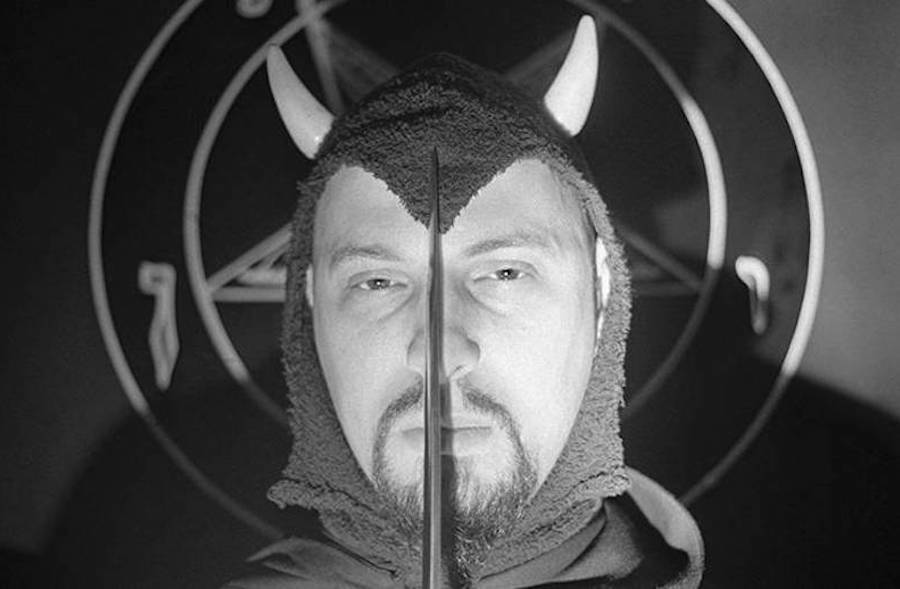 Bettmann/Getty ImagesAnton LaVey in his infamous headdress. He often dressed up like the Devil at the Church of Satan.

Even Anton LaVey’s physical appearance was stark and memorable. He stood over six feet tall with a clean-shaven head and the goatee of a movie villain. His intriguing allure bred a devoted following and even sparked rumors that he portrayed the Devil in Roman Polanski’s Rosemary’s Baby.

He lived in a pitch-black Victorian house in San Francisco, which became the headquarters of his newfound Church of Satan. It was a turning point for the hippie generation’s carefree spirit, which became fertile ground for alternative religions — like LaVey’s mission to spread the word of Satan.

But before LaVey became an entrancing figure of America’s counterculture movement of the 1960s, he came from humble beginnings. While the “father of Satanism” was never an angel, he grew up in modest conditions before he made the fateful decision to nurture a hedonist flock. This is his story.

The Early Life Of Anton LaVey 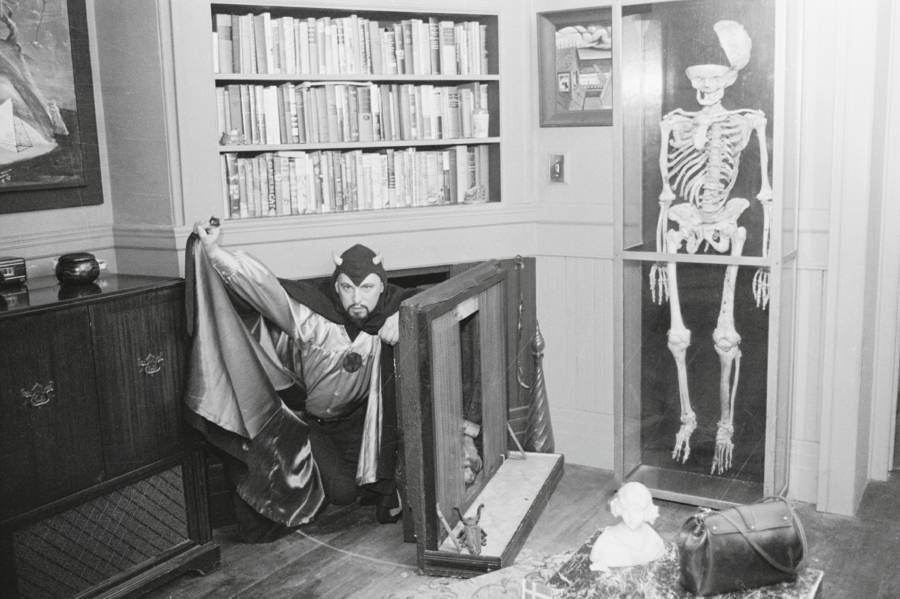 Bettmann/Getty ImagesAnton LaVey emerges from a hidden corridor behind a false fireplace in his study.

Born Howard Stanton Levey on April 11, 1930, in Chicago, Illinois, the future Satanist was a humble child raised by earnest and hardworking parents. His father Michael Joseph Levey worked in real estate and auto parts while his mother Gertrude Augusta Coultron was a homemaker. The couple relocated to San Francisco shortly after their son was born.

While his parents were anything but mystical, Anton LaVey’s interest in the supernatural emerged at an early age. He later claimed that his grandmother was Transylvanian and told him stories of demons and vampires.

However, it’s worth noting that Anton LaVey was known for stretching the truth — and in some cases completely making up stories — in order to attract attention. For this reason, little is known for sure about LaVey’s early life, as it’s difficult to separate myth from reality.

As he got a little older, LaVey soon realized that traditional school was not for him. When he was 16 years old, he dropped out of Tamalpais High School in Mill Valley to explore what else was out there. Around the same time, he realized that he had a talent for music — and reportedly began playing instruments like the organ and oboe at local venues to support himself.

LaVey once claimed that he actually left academia to join a traveling circus. If he is to be believed, he once worked as a “cage boy” and lion tamer, performing death-defying stunts with big cats. And after dropping that dangerous career, he decided to start working as a nightclub organist.

However, reporters who investigated these claims found no evidence that he ever worked for any traveling circus — and it’s unclear whether he actually played the organ in a nightclub either. 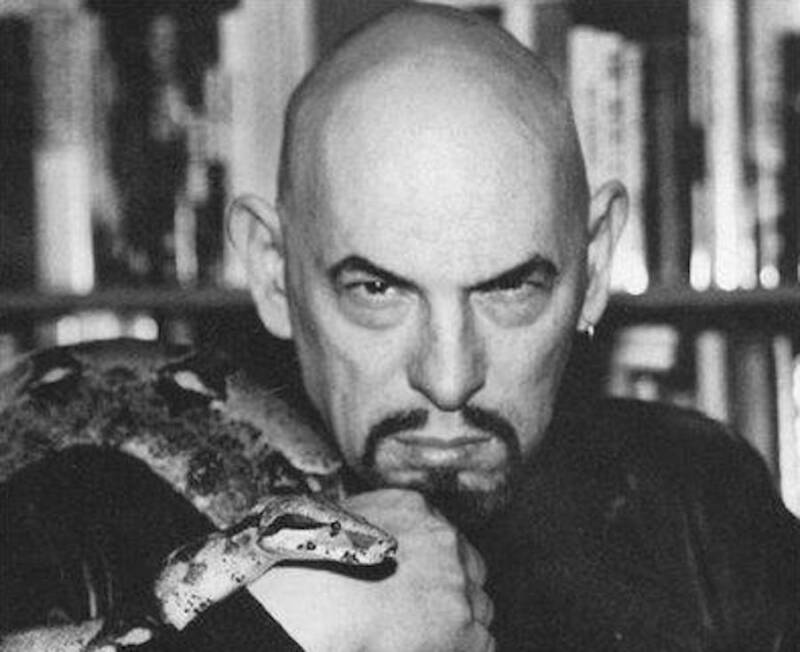 Wikimedia CommonsAnton LaVey promoted Satanism as a form of human liberation and a rejection of Christianity.

What is clear is that LaVey met his future wife Carole Lansing in 1950. He married the 15-year-old just one year later, and they would soon have a child in 1952. At some point during this time period, LaVey reportedly enrolled in the City College of San Francisco to avoid the Korean War draft.

According to LaVey, he eventually worked for the San Francisco Police Department for a few years. While later research yielded no proof of that, he had already established himself as an entrancing figure of the local counterculture — so his questionable origin story added to his mystique.

Rumors that he slept with Marilyn Monroe or hypnotized animals with his music only furthered his legend — even though these claims weren’t true.

By 1960, LaVey and Lansing had divorced, and LaVey began a longtime relationship with Diane Hegarty, who would give birth to his second child — and help him found his controversial church.

How Anton LaVey Founded The Church Of Satan 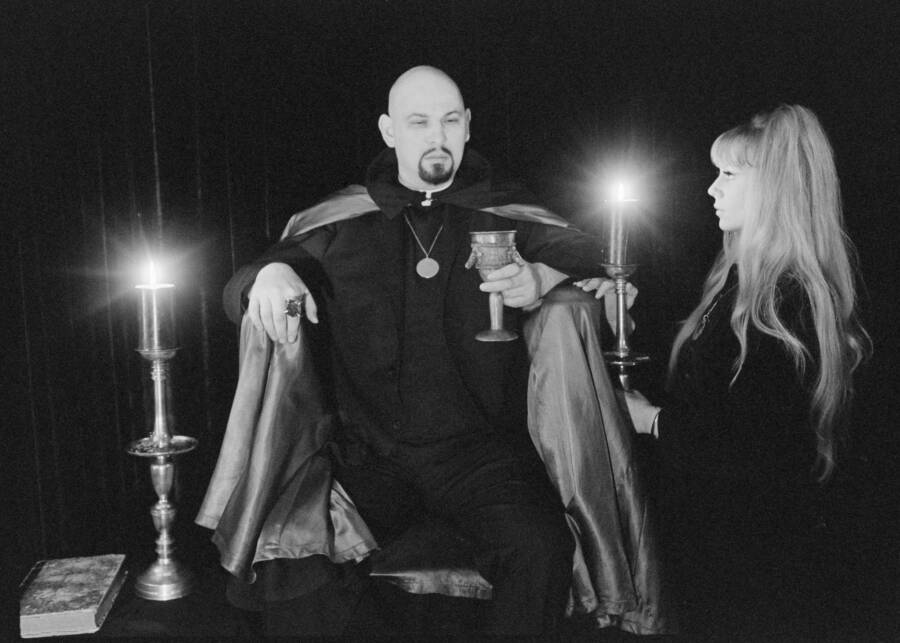 Bettmann/Getty ImagesAnton LaVey and his longtime partner, Diane Hegarty, perform a ritual at the Church of Satan.

By 1966, Anton LaVey had built a large enough following to start his own movement. On April 30th, he officially founded the Church of Satan.

He purposely chose that date since it coincided with Walpurgisnacht — an old Christian festivity that honored a Medieval abbess. Notably, Saint Walpurga was originally celebrated for protecting Christians against witchcraft. So it’s no coincidence that LaVey chose to hijack that day.

LaVey’s “Black House” on California Street soon became the headquarters of his new religion. There, he hosted “rituals,” which often included scantily clad women. Sometimes, they would dress like witches and perform nightclub-like shows, but other times they’d simply lay across altars or other random pieces of furniture — completely naked.

But despite the carnal overtures, there was a philosophy behind LaVey’s salacious religion. In 1969, he published the Satanic Bible to make that very point. His book clarified that the Church of Satan promoted human self-determination — and the idea that humans should simply enjoy their lives.

As LaVey exaggerated the aesthetic shock of his appearance and his ritual-based church, he preached for pleasure rather than forgiveness. And despite his costuming, he argued that the Devil’s image as a horned beast was a human invention, and that waiting for the afterlife was a waste.

“The whole concept of Satan’s tempting man is wrong,” said Anton LaVey. “On the contrary, he motivates man. We just think it’s time the Devil was given his due… The Devil is the guy who’s kept all the churches in business.”

All in all, the Church of Satan was meant to be both a parody of Christianity and a rejection of traditional Christian concepts — especially the feeling of guilt. So naturally, it wasn’t long before Hollywood took note.

Introducing Celebrities And The Hollywood Elite To Satan 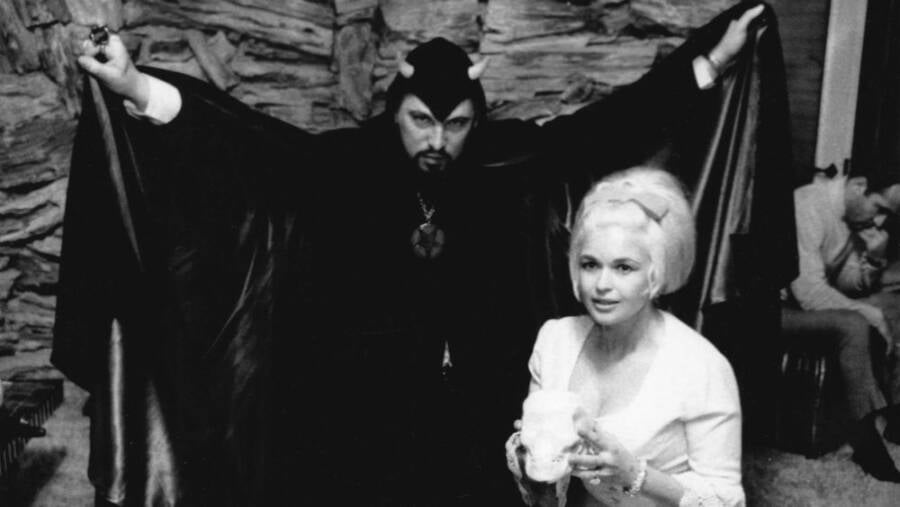 As news of the Church of Satan spread far and wide, Anton LaVey only attracted about 2,000 devoted followers at a time. But among these followers were some high-profile stars.

The famed pinup model Jayne Mansfield was also invited to become a follower — and she was even romantically linked to LaVey at one point. Though they eventually parted ways, she once called LaVey a “genius.”

Eerily, some claim that he put a curse on her after their relationship didn’t work out — causing her to die in a gruesome car crash in 1967. 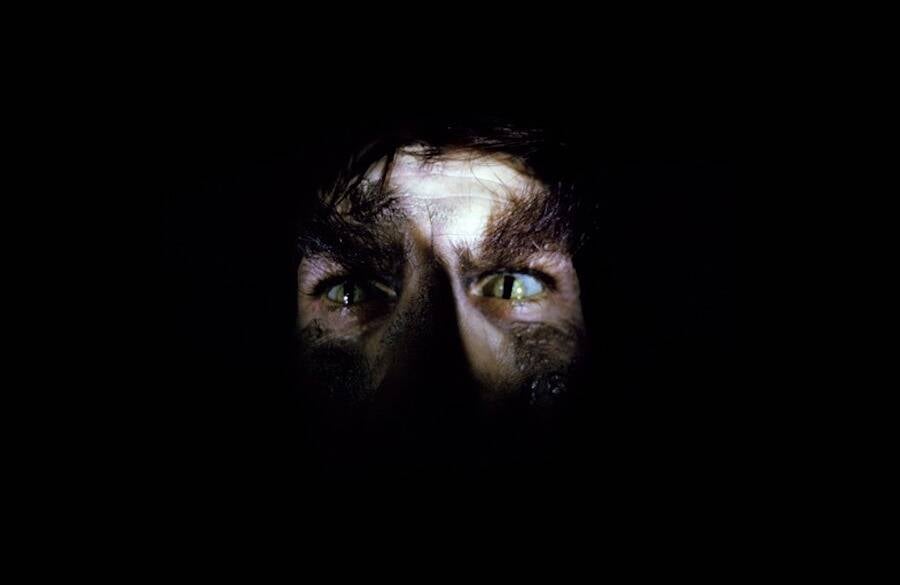 William Castle EnterprisesIt was once rumored that Anton LaVey played the Devil in Rosemary’s Baby.

Ominous tales like these were whispered for years. Even though many of these claims weren’t true, they still accomplished many of the goals the church had fought for all along — especially attracting attention.

For instance, it was long rumored that Anton LaVey worked as a consultant for Roman Polanski on his film Rosemary’s Baby — and that LaVey portrayed the Devil himself in the movie. While this later turned out not to be the case, it kept people interested in LaVey and his connections to Hollywood.

Meanwhile, the things that were true were controversial enough to start an uproar. To the horror of Christians, LaVey officiated Satanic weddings, including one between socialist Judith Case and journalist John Raymond.

Perhaps most blasphemous to Christian onlookers, LaVey also pulled his whole family into the Church of Satan — including his children. He even baptized his young daughter into the fold in May 1967.

LaVey certainly got the attention he was looking for, but he also received harassment and death threats from people who saw him as the literal Devil on Earth. Before long, he realized that he had to make some changes.

The Legacy Of Anton LaVey 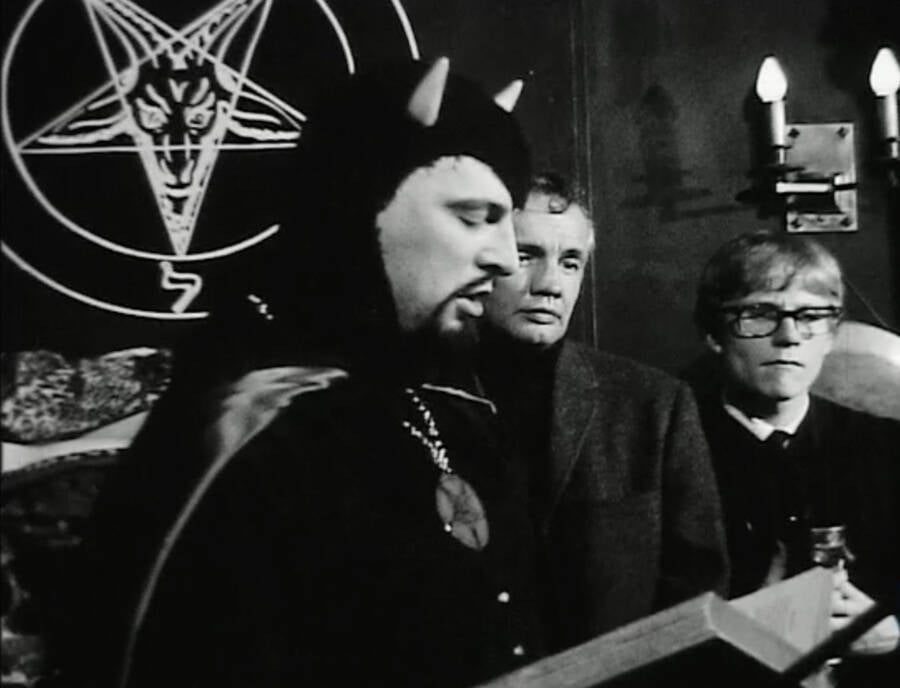 Though Anton LaVey was a central figure in California during the hippie heyday of the 1960s, his time in the sun soon came to an end. The Manson Family murders near the end of the decade seemed to put a global damper on alternative lifestyles — particularly those associated with Satan.

With the notion of saddling up to the Devil falling out of favor, a large number of people completely abandoned the church during the 1970s. Nonetheless, the Church of Satan soon bounced back as more of a “secret society” — with the same values but far less publicity.

For the most part, LaVey stopped the public ceremonies and moved his organization underground. Still, he occasionally re-emerged in the press to spread the word of Satan until he died of pulmonary edema at age 67.

Though he died on October 29, 1997, his death certificate lists his date of death as October 31st — Halloween. In keeping with his specially cultivated image of dark and mysterious, his family said that they didn’t want his followers to be distracted during their “most important holiday season.”

Alas, even in death, Anton LaVey was especially good at sticking to his brand.

“He was a defiant, bold man, who acted on his convictions with great personal courage,” his daughter Karla once said. “Some called him the world’s most dangerous man; that was because he was not afraid of the consequences of being considered evil.”

After learning about Anton LaVey and the Church of Satan, read about the Satanist “sex castle” of Corpsewood Manor — and the horrific murders that took place there. Then, learn about the Satanic monument recently unveiled in front of Arkansas’ State Capitol.