Taken from a March 1942 edition of LIFE magazine, these maps envision the potential routes of an Axis invasion into the United States during World War II.

In March 1942, it was only four months prior that the Japanese had bombed Pearl Harbor and Nazi Germany had officially declared war against the United States. Hitler seemed unstoppable and he and his Axis comrades had only succeeded in their conquests to that point.

As German armies on the Eastern Front had taken over significant swaths of Soviet Russia — marching steadily towards Moscow — Hitler surely had more confidence in his chances of victory than at any other point during the war. Meanwhile, Japan was encroaching into various British, Dutch, and American holdings in the Pacific and U.S. ships began to face the devastation of kamikaze attacks.

This unsettling atmosphere was no more evident than in a March 1942 issue of LIFE magazine that featured scenarios by which Germany and Japan might invade the United States.

Plan 1 (shown below) detailed a German-Japanese invasion with each faction attacking an American coast.

Plan 2 has the Japanese invading the West Coast of America via Pearl Harbor and then California. Plan 3 has the Japanese invading North America through the Panama Canal, then proceeding up through Mexico to the West Coast of the United States. Plan 4 has the combined naval strength of the Axis powers taking over the Atlantic, leading to an eventual invasion of the United States through the Mississippi River. Plan 5 has the Axis powers invading the United States through Norfolk, Virginia. Plan 6 involves the Nazis invading the United States through Canada via the St. Lawrence and Hudson valleys. 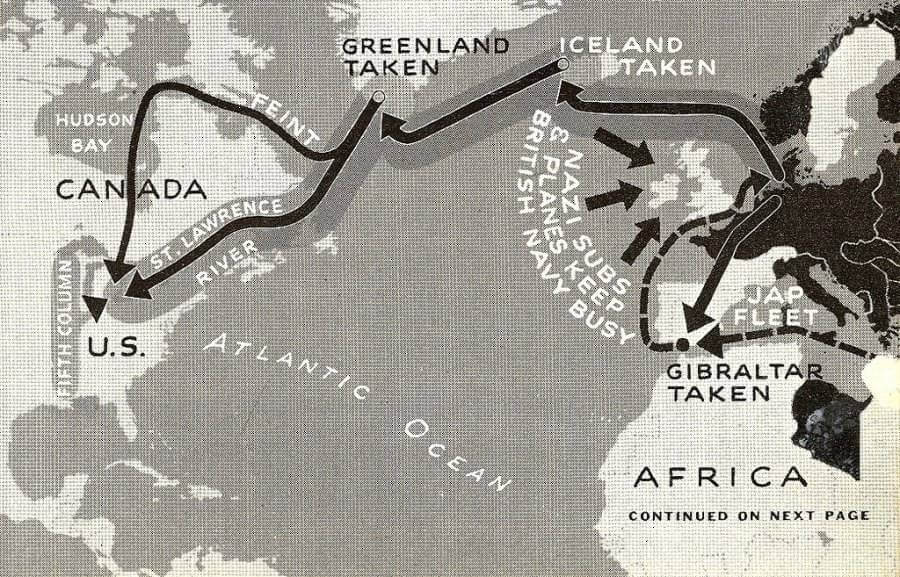 While Nazi documents detailing plans for a North American holocaust have recently come to light, it’s unclear to what extent Germany was actually plotting an invasion of the United States (though we do know that he experimented with long-range missiles intended to strike the mainland).

Whether Hitler was keen on partnering with the Japanese in order to conquer North America or not, however, the proposed scenarios above certainly showcase the nation’s anxiety at that time.

In terms of the Japanese, they’d eventually pursue a related endeavor on their own — with high-altitude balloon bombs sent across the Pacific in 1945 through the 30,000-foot high jet stream. This project was apparently so serious that Japan spent two years making thousands of lightweight, yet durable balloons.

With 40-foot-long ropes connecting 30-pound explosives to each balloon, the plan to silently rain hellfire over North America — and subsequently create massive forest fires — went underway. Some 9,000 of these “Fu-Go” balloons were launched between Nov. 1944 and April 1945 — but most of them fell into the ocean.

Only a few Fu-Gos reached their targets and the only victims were five innocent children and one pregnant woman who happened upon a bomb and got too close while outdoors near Gearhart Mountain in Bly, Oregon. The plan was seemingly abandoned by the Japanese in favor of more proven tactics.

Whether an Axis invasion of the U.S. would have proven just as failure-prone as these balloon bombs will never be known, but the maps above certainly take us back to a time when such an invasion seemed all too possible — and terrifying.