Norwegian authorities found a giant ball of plastic bags clogging this whale's stomach just over a week ago. 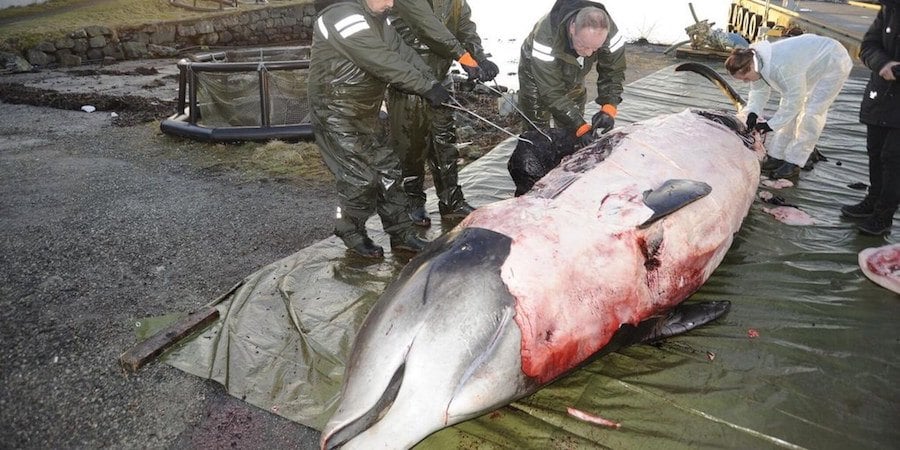 Moved by its painful cries, Norwegian authorities euthanized a beached whale on January 28. They later found that it had ingested more than two dozen plastic bags and an even larger amount of microplastics.

This Cuvier’s beaked whale stranded itself multiple times near the island of Sotra, Norway in the days before its euthanization. Eventually, local authorities came to the conclusion that it was too malnourished and sickly to continue on its own.

Researchers at the University of Bergen then performed an autopsy on the whale and found that 30 plastic bags were clogging its stomach, noting that this is likely what caused the whale’s death.

This clumped-up plastic would have been very painful for the whale, according to Terje Lislevand, a zoologist at the University of Bergen. He added that “the plastic was like a big ball in the stomach and filled it almost completely.”

This plight is not the first of its kind; previous autopsies of other whales have revealed plastic bags clogging their stomachs.

Seeker reports that Seattle researchers found plastic in the autopsies of a gray whale in 2010 and a humpback whale in 2012. Meanwhile, German researchers discovered 13 sperm whales in 2016 that had ingested plastic waste, some of which included car parts.

According to Seeker, researchers have found plastics in a wide-range of marine life that regularly spends time at around 1,000 to 2,000 feet below the surface of the ocean.

To truly put this issue in perspective, the Ellen MacArthur Foundation released a report in January 2016 estimating that — by weight — there will be more discarded plastics in the world’s oceans than fish by 2050.

Next, discover just how unbelievably bad the pollution in China has become. Then, see how artist Alejandro Duran turns ocean trash into an art project.