Go inside the wild world of Bhagavan "Doc" Antle, the animal conservationist who has been accused of exploiting his all-female staff and executing tigers at his Myrtle Beach Safari.

When the Netflix series Tiger King: Murder, Mayhem and Madness first captivated audiences in March 2020, there was no shortage of lurid accusations and colorful characters for viewers to latch onto. This sprawling saga of animal abuse, sexual impropriety, and even murder-for-hire among wildlife wranglers presented a wealth of big personalities with even bigger rap sheets.

From drug lord-turned-zookeeper Mario Tabraue to a crazy big cat lady named Carole Baskin who may have killed her husband to the outrageous and one-of-a-kind series star Joe Exotic, the crazy world of privately-owned animal sanctuaries enthralled viewers as the Netflix series proved extremely popular.

But even among this cast of characters, Bhagavan “Doc” Antle stood out. The founder and director of a 50-acre wildlife preserve known as The Institute for Greatly Endangered and Rare Species (T.I.G.E.R.S.), Antle made his mark on the series as the ponytailed entrepreneur who seemed to operate his South Carolina property more like a cult than an animal sanctuary. 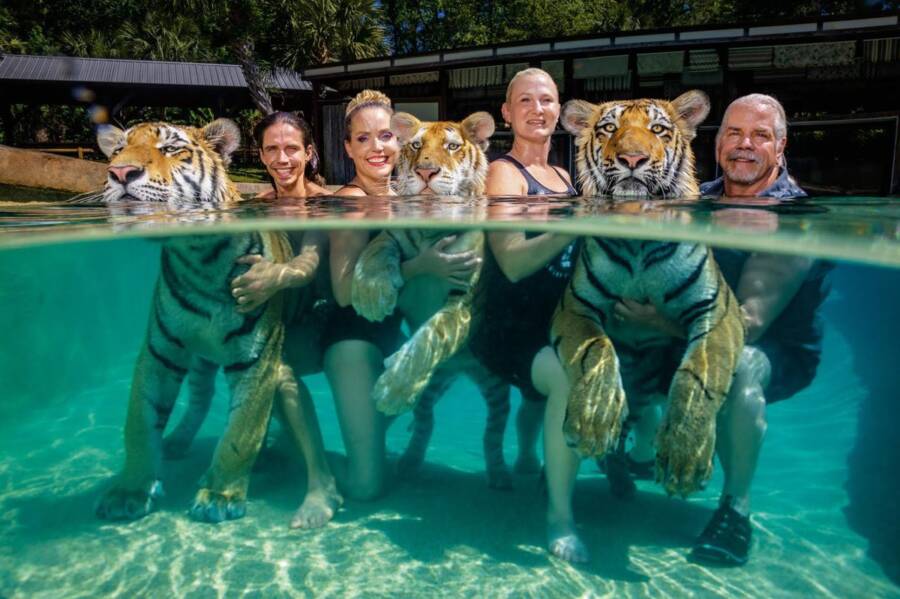 Doc Antle’s Myrtle Beach Safari employs an all-female staff, workers who were reportedly won over by either the tiger cubs or Antle’s insistence that he is a master Eastern mystic. Many of these women were reportedly encouraged by him to change their name or appearance and have been continuously underpaid.

Meanwhile, Antle has trained big cats for decades and even worked with stars like Britney Spears, but he’s also garnered over 35 USDA violations for mistreating animals on his wildlife preserve, including allegations that he has euthanized tiger cubs. And in October 2020, after years of rumors, he was finally hit with a tide of charges related to animal cruelty and wildlife trafficking. He’s always denied any such claims, but the evidence has long piled up.

Whether he’s guilty or innocent, Bhagavan Antle’s story is just as wild as the animals he’s wrangled.

Who Is Bhagavan “Doc” Antle?

Kevin Antle was born on March 15, 1960, in Salinas, California. Antle was raised by a wealthy family on an industrial farm and his father was a boxer who fostered discipline in him through martial arts.

From his mother, who nursed sick horses in their family kitchen, Antle inherited an interest in Eastern philosophy. She also gave him the Hindu name “Mahamayavi Bhagavan.” “Bhagavan” is Hindu for “friend of God.”

“Some blend between Rambo and the Dalai Lama — that’s what I wanted to be when I grew up,” Antle recalled. 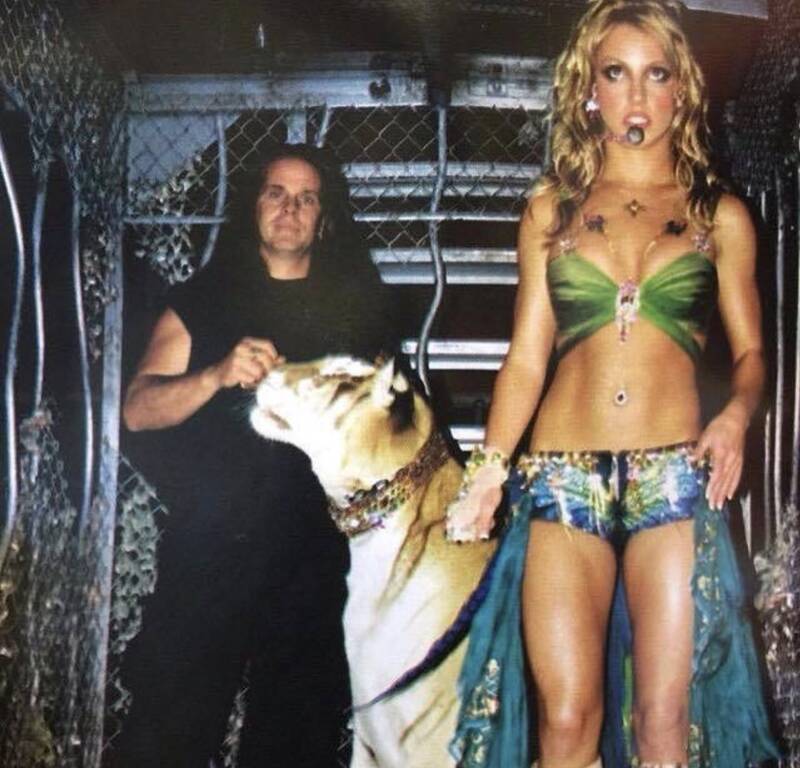 TwitterDoc Antle said Britney Spears “was a darling” during their collaboration on her performance of “I’m a Slave 4 U” at the 2001 MTV Video Music Awards.

Antle never cared much for traditional education, dropping out of school before the ninth grade and competing in rodeos or training dogs instead. Before founding T.I.G.E.R.S., though, Antle was a bit of a wild thing himself.

Antle traveled to China instead of going on to college, and garnered his “Doc” nickname after studying basic medicine there. He became obsessed with yoga, herbal and alternative medicine, and when he returned to the States, he began practicing both at an ashram in Virginia and scored a gig as a lecturer at Exxon. It was here that Antle realized the big money in big cats.

Antle acquired his first tiger in 1982 and it reportedly took six months for the big cat to let him pet it. The two eventually formed a friendship so trusting that Antle, his dogs, and the tiger routinely spent their time together.

Antle brought his tiger to an Exxon conference and visitors there asked to take photos with the animal. Antle didn’t object and quickly sent his assistant to get some Polaroids.

Doc Antle worked with pop stars ranging from Britney Spears to Ashanti and on films like Ace Ventura and Doctor Doolittle.

“I was there ’till midnight,” said Antle. “Every single person wanted to sit with that tiger and get a Polaroid.”

Business had begun. Antle would soon loan his animal-handling services to films like Ace Ventura: When Nature Calls and Mighty Joe Young, for which he was so handsomely compensated that, in 1994, he had enough money to purchase a Myrtle Beach property. There, he opened an animal sanctuary for big cats and apes.

By the early 2000s, that property grossed around $1.3 million per year.

Though Antle was already making good money by charging $20 per photo with the animals on his sanctuary, he was more interested in developing his own personal kingdom than a business — so he hired a team of attractive women.

A clip from Tiger King: Murder, Mayhem, and Madness about the women in Doc Antle’s life.

One of Antle’s former employees-turned-lovers, however, accused him of both sexual and psychological manipulation. She claimed that Antle encouraged his employees, who he called apprentices, to have sex with him so that “they would be bonded to him in this way, where he felt like he could get them to do anything.”

Antle is cited in the Netflix series as having several wives and running a rigorous, albeit misogynistic vetting process for his so-called apprentices.

Though employees of Doc Antle’s Myrtle Beach Safari don’t need an education, recruits are required to be childless and single. No time off is given and every woman is expected to be within 20 pounds of their “perfect athletic weight or working to get there.”

Employees need to be able to do push-ups, pull-ups, and run a 12-minute mile. Lastly, the women must all be vegetarian like Antle himself and refrain from drinking or smoking.

Bhagavan Antle has reportedly also forced his employees to change their names to the likes of Moksha, China, and Ranjnee. 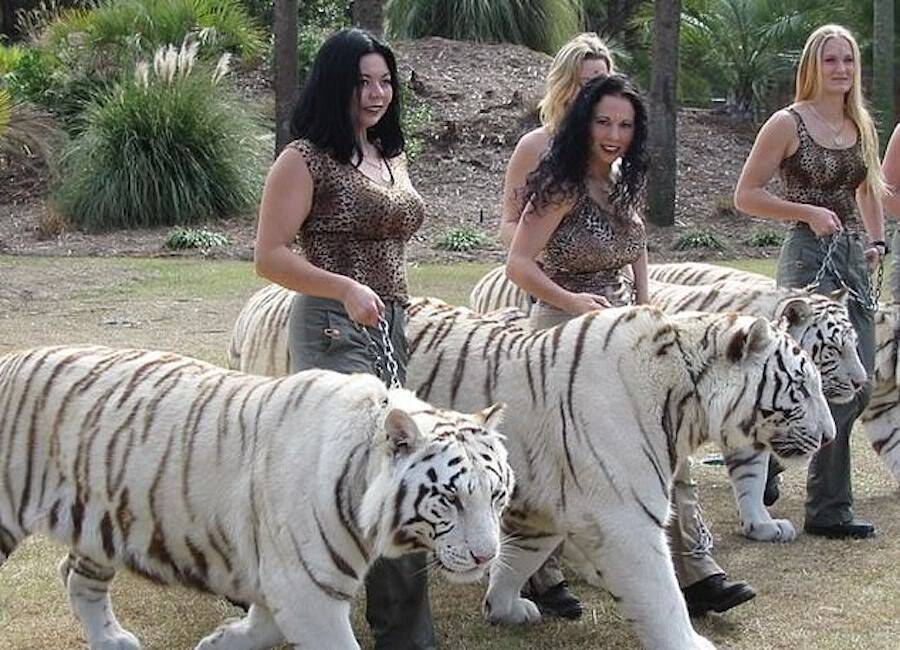 NetflixJust a few of Doc Antle’s scantily-clad staffers. He has allegedly urged at least one to get breast implants and he decides what they all wear.

“I tell my apprentices: two years, all you’re going to do is know what we do for a living, but you’re not going to know how we do it,” he said. “In five years, they go, ‘Wow, it’s really complicated.’ And in 10 years, most of them don’t want to do it. It’s too hard to work those cats.”

These staff members either live in the park or very nearby.

“If you work a couple hours and then leave the animals, they don’t see you as family,” said Moksha, who was urged to change her name after becoming an employee. She insists that living in the park is vital to forming a bond with the animals there. “They know I’m mom, I’m their life, I’m their freedom, I give them all the gifts.”

Antle has reportedly mixed business with pleasure and described one employee as his “little Italian girlfriend,” and another who has since left, as “one of my lovely girlfriends for a long time, and then she wasn’t.” Antle wears a wedding ring, despite the fact that his legal wife died at least 20 years ago and has since been a rather promiscuous, polyamorous boss to his employees.

“I have been fortunate enough to be a lifelong target of the adoration of the opposite sex,” Antle said. “Wearing a wedding band keeps some of the honest women at bay.”

Though according to the Netflix documentary, Antle still has more than a couple wives. 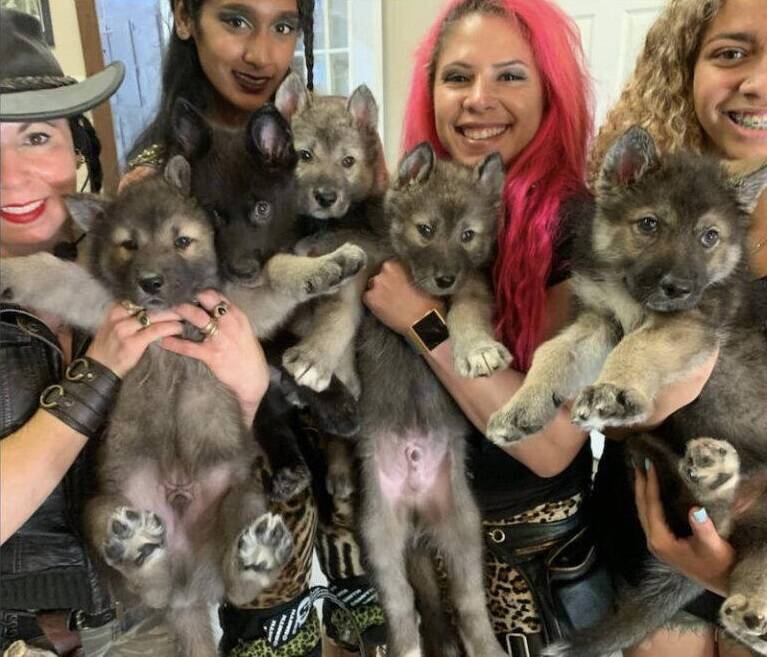 InstagramAntle himself claims he doesn’t have any wives and that his polyamorous lifestyle is consensual.

Antle adds that the women comprising his harem are actually just the girlfriends of his son and grandchildren. He had an equally curious explanation for Fisher’s allegations of abuse. “This is the ramblings of a crazy child who has a lot of, in my opinion, issues and somehow those have boiled up,” he said.

Trouble With The Law And Disturbing Allegations From Joe Exotic

Bhagavan Antle’s business hit a snag in 2005 when the U.S. Department of Agriculture prohibited him from allowing visitors to get close to his big cats, ruling that “there is not sufficient distance or barriers between the animals the public to assure the safety of the public or the animals.”

Antle lost the battle in court and consequently, his visitors are allowed to hold cats only between eight and twelve weeks old. Antle says this small window is the reason why he charges so much for photos with the cubs. But it is also the reason why he’s become the subject of some macabre rumors.

Even Joe Exotic himself claimed that Antle was breeding big cats to keep the cub-petting business going and euthanized the tigers in a gas chamber when they got too big. Exotic added that Antle is the single worst character in the world of animal sanctuaries. This has yet to be proven, however.

Doc Antle’s Myrtle Beach Safari was raided in December 2016. The USDA conducted 23 investigations into the park between April 2013 and June 2016, which is over three times as many as similar facilities receive in the same timeframe. Antle has also allegedly sold cubs to similar sanctuaries and unaccredited zoos, one of which was infected with ringworm.

Wildlife Trafficking Charges In The Wake Of Tiger King

Just after Tiger King‘s release in March 2020, Doc Antle quickly decried his portrayal in the wildly popular Netflix series, claiming that the allegations of animal abuse and other misdeeds were utterly untrue.

According to Antle, Tiger King was nothing but “sensationalized entertainment.”

But just a few months later, Antle was in trouble with the law for some of the very crimes discussed in the docuseries. On Oct. 9, 2020, the Office of the Attorney General in Virginia indicted Bhagavan Antle on two felony charges concerning animal trafficking as well as 13 additional misdemeanors. 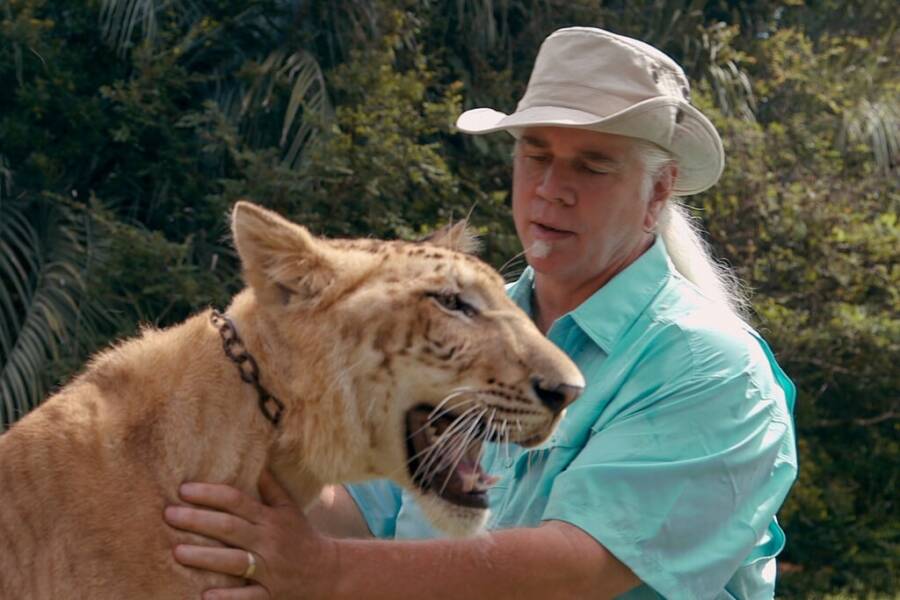 NetflixThough Doc Antle was hit with more than a dozen charges related to animal cruelty in October 2020, he remained steadfast in his claims that he is an honest and lawful man.

These charges followed a long-brewing investigation during which authorities uncovered a raft of abusive practices at a Virginia wildlife park owned by a business partner of Antle’s named Keith Wilson. Upon raiding Wilson’s Wild Animal Park in August 2019, authorities seized 119 animals (including lions, tigers, and bears), citing myriad evidence that they were being housed inhumanely and treated cruelly.

But Antle has remained as adamant as ever that he is an innocent man, saying, “I categorically deny any act or conduct that could ever be considered as ‘animal cruelty’… I look forward to being able to answer these charges and to be able to clear my good name.”

Just how good Doc Antle’s name remains in doubt following the release of Tiger King. But perhaps the courts can decide once and for all whether this much-maligned man is an abusive criminal, a well-meaning victim, or somewhere in between.

After learning about Bhagavan Antle, read about the 40 tiger cubs found dead a popular Thai tourist destination. Then, read up on Tiger King subject and notorious conman Jeff Lowe.