Installed at the top of Blarney Castle in County Cork, Ireland, the Blarney Stone can only be kissed while hanging upside down and suspended over thin air — yet countless people line up to do it each year. 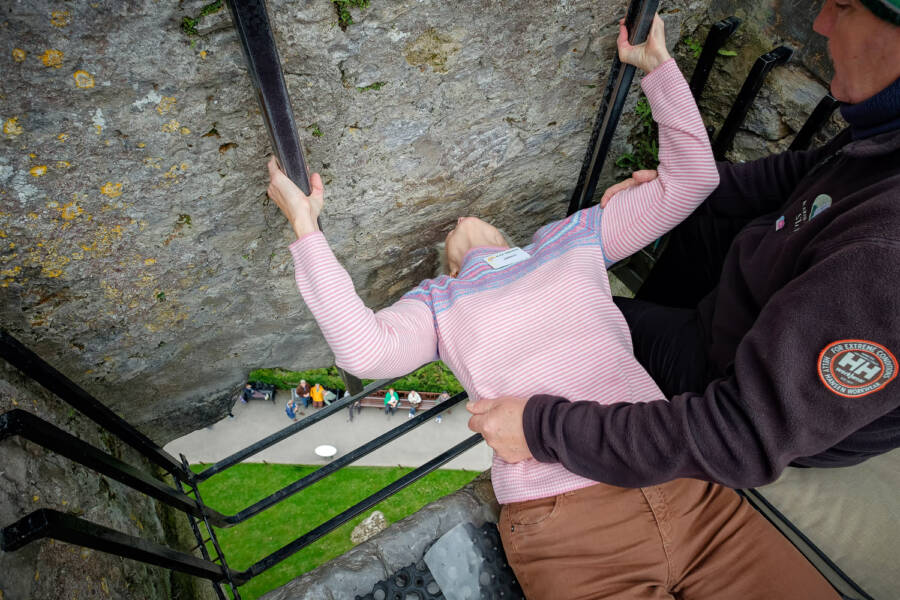 The Blarney Stone would undoubtedly be just another rock were it not for its mysterious origins and legends surrounding it. Thousands of tourists annually flock to County Cork, Ireland, to kiss it. Built into the battlements of Blarney Castle in 1446, it is said to imbue those whose lips touch it with the gift of eloquence, but that myth is just the beginning.

The stone’s origins range from Biblical myths to Scotland’s defeat of the English. Some say it was discovered during the Crusades. Others claim it was built from the same rock used to make Stonehenge. Local Irish legend suggests a goddess revealed the stone’s power to the chieftain who later built the castle.

And even though modern science has laid these legends to rest, the Blarney Stone’s mythologized origins imbue the rock with a magic of its own.

Legends Of The Blarney Stone 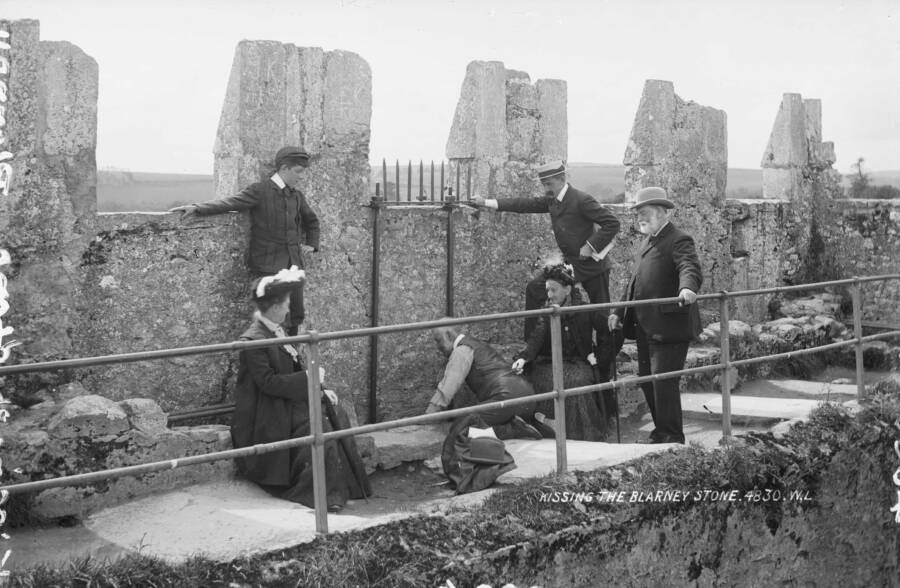 Wikimedia CommonsA group of tourists kiss the Blarney Stone in 1897.

Located at Blarney Castle, five miles outside the city of Cork in the south of Ireland, the Blarney Stone has been visited and kissed by everyone from Winston Churchill to Laurel and Hardy. But kissing the Blarney Stone isn’t easy. Visitors have to literally bend over backward while being supported from above a high drop. Luckily, safety bars have been installed in the modern era.

But why kiss it in the first place? What makes the Blarney Stone so special that people once risked death to do so? The oldest tales aiming to explain the stone’s origin are found in Irish folklore. The first concerns chieftain Cormac Laidir MacCarthy, who would build the castle itself.

Embattled by legal trouble that he feared would ruin him, MacCarthy pleaded with goddess Clíodhna for help. She instructed him to kiss the first stone he encountered on his way to court, which would give him the eloquence needed to win his case. Following suit, he arrived at the proceedings with such confidence that he won the case — and incorporated the stone into his castle.

A century later, “blarney” would become synonymous with skillful flattery after the head of the MacCarthy family was said to have stalled the Earl of Leicester from seizing the eponymous castle by eloquently distracting him with conversation. As such, kissing the Blarney Stone is said to imbue one with “the ability to deceive without offending.” 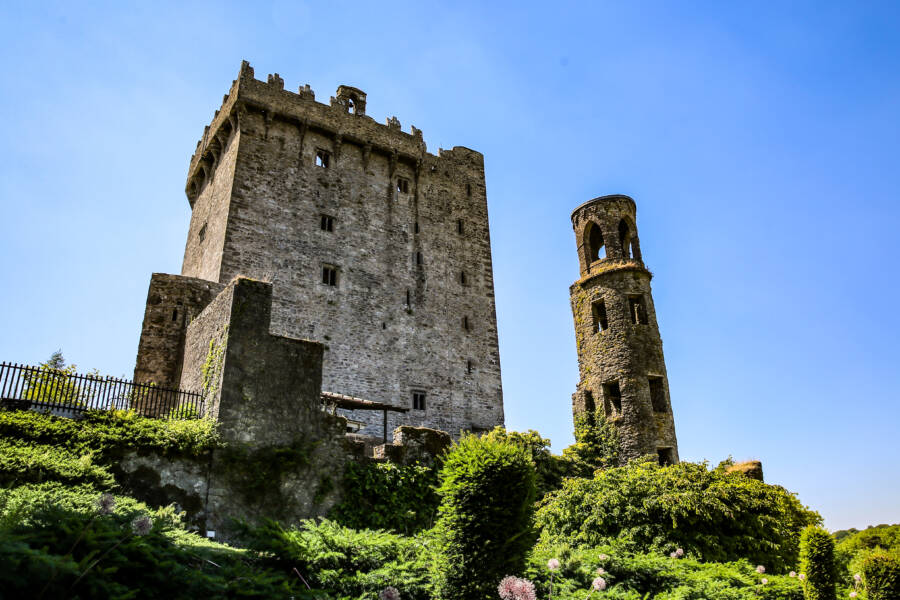 Another legend maintained that the rock was the biblical Stone of Jacob, or Jacob’s Pillow. The Book of Genesis claimed the Israelite patriarch awoke from a vision in his sleep and chronicled his dream unto a stone, which the Prophet Jeremiah purportedly transported to Ireland.

Another myth claims the Blarney Stone was found in the Middle East during the Crusades and was the Stone of Ezel, where David hid from his father Saul, the king of Israel, who tried to kill him. Others claim it was the same stone Moses struck to produce water for his thirsty companions during the exodus from Egypt.

And yet another folklore account suggested that the stone was a piece of the legendary Scottish Stone of Scone, used for centuries as the coronation stone for Scottish kings.

This version of the origin of the Blarney Stone holds that, Cormac MacCarthy came to the aid of Robert the Bruce in 1314. Providing the King of Scots with 5,000 men at the Battle of Bannockburn to win the First War of Scottish Independence, Cormac MacCarthy received the stone as a gesture of gratitude. 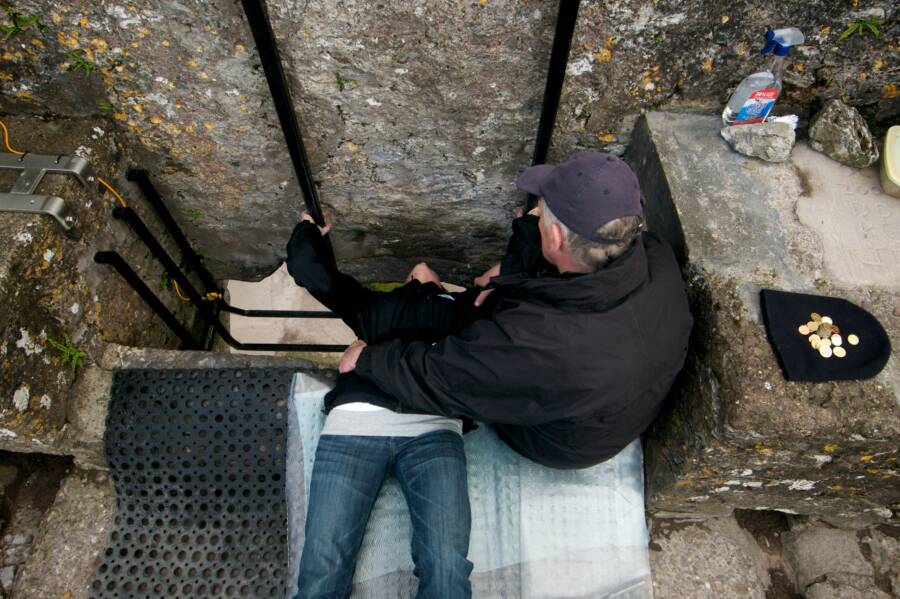 Flickr/Jeff NyveenBefore the modern era, no guide nor guardrails were present.

Unfortunately, those who passionately wished for any of the legends to be true will now have to waive away science to do so. While a microscopic sample of the stone was taken in the 19th century, only modern-day technology has allowed scientists to properly study it.

In 2014, geologists at the University of Glasgow’s Hunterian Museum discovered was that the material was neither sourced in Israel nor from Stonehenge. While tiny, the slice of the stone showed that it was made of calcite and contained brachiopod shells and bryozoans unique to Ireland.

“This strongly supports views that the stone is made of local carboniferous limestone, about 330 million years old, and indicates that it has nothing to do with the Stonehenge bluestones, or the sandstone of the current ‘Stone of Destiny,’ now in Edinburgh Castle,” said Dr. John Faithful, curator of the museum.

The sample itself was taken between 1850 and 1880 by St. Andrews University’s professor Matthew Heddle. Blarney Castle was partially in ruins at the time but still a popular site, with breaking off some stone not too difficult a task. As for today, Blarney Castle and the Blarney Stone itself are extraordinarily popular.

Open throughout the year and on all holidays save for Christmas Eve and Day, up to 400,000 people visit the stone every year. With a cafe and gift shop on-site, visitors can test their newly-bestowed powers of eloquence themselves — by trying to snag a free t-shirt or coffee.

After learning about the Blarney Stone, read about Ireland’s Newgrange tomb which is older than the pyramids. Then, take a look at 27 stunning photos of McDermott’s castle.