The world’s biggest peacekeeping organization caused an epidemic that’s killed 10,000 and still going strong — and they won’t own up to it. Are the victims finally about to get justice? 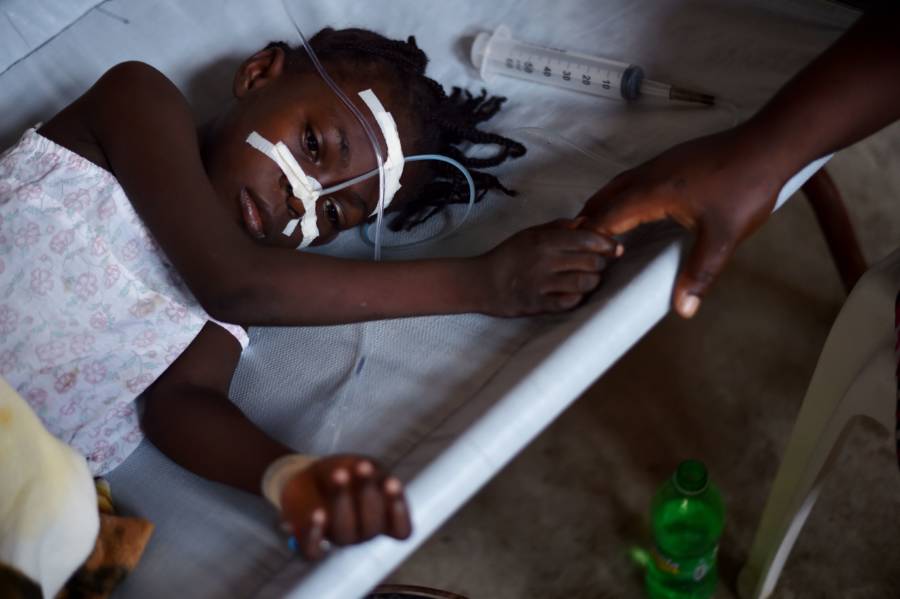 HECTOR RETAMAL/AFP/Getty ImagesA young girl, with cholera symptoms is treated at the Cholera Treatment Center of Diquini in Port-au-Prince, Haiti on 23 August, 2016.

ON AUGUST 22, BAN KI-MOON, the Secretary General of the United Nations, said that a “significant new set of UN actions” will be put into motion in response to the six-year cholera epidemic in Haiti.

That epidemic has officially killed around 10,000 people, but most cases aren’t officially reported, and some estimate that the death toll could be as high as 30,000, with more than 2 million people infected in total.

Worldwide, cholera — which infects the intestines and causes intense diarrhea and vomiting — affects 3 to 5 million people and kills 100,000 each year, the Centers for Disease Control and Prevention reports. In severe cases, dehydration can cause death within hours. However, adequate treatment brings the death rate down to less than one percent.

In Haiti, the UN’s new initiative could help treat many people, get the death rate way down, and bring an end to years of suffering. But there’s one big caveat: It’s the UN’s fault that cholera has devastated the small Caribbean nation in the first place. 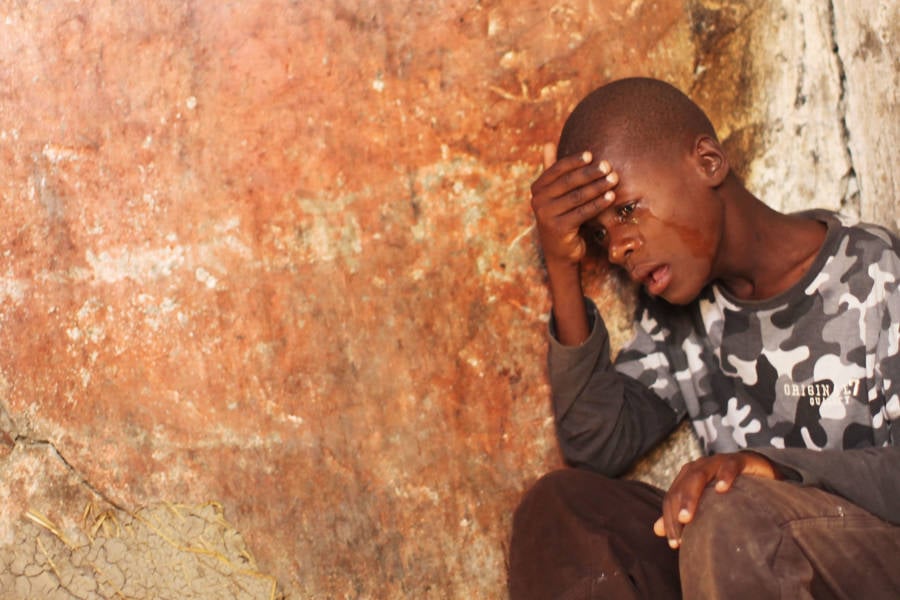 Spencer Platt/Getty ImagesMisthaki Pierre cries after the burial of his mother, Serette Pierre, who had recently died of cholera, on October 29, 2010 in Back D’Aguin, Haiti.

The UN’s response to the cholera outbreak “is morally unconscionable, legally indefensible and politically self-defeating,” Philip Alston, a New York University law professor and advisor recently wrote in a report to the UN that was obtained by The New York Times.

Alston wrote that the epidemic would never have happened if it weren’t for the UN, and that the treatment of the victims “upholds a double standard according to which the UN insists that member states respect human rights, while rejecting any such responsibility for itself.”

Ki-moon made a statement on the entire matter only after Alston’s report became public two weeks ago. That statement didn’t acknowledge that the blame for the epidemic lies with UN peacekeepers, but in firmly stating the need for a “significant new set of UN actions” it was the closest the organization has come to admitting that it played a role in causing the worst cholera outbreak in decades.

How The UN Brought Cholera To Haiti 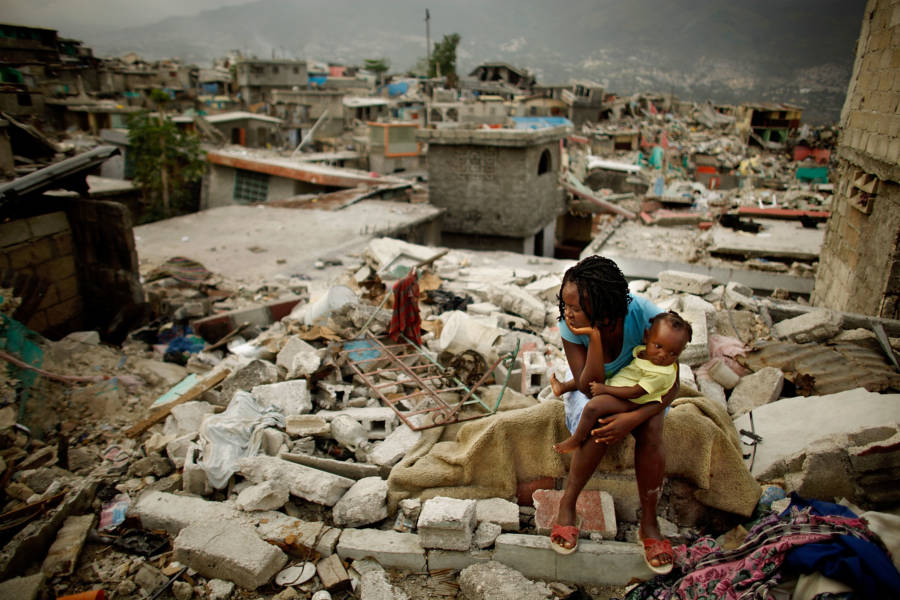 Chip Somodevilla/Getty ImagesSherider Anilus, 28, and her daughter, nine-month-old Monica, sit on the spot where their home collapsed during the earthquake that struck Port-au-Prince in January 2010.

On January 12, 2010, a 7.0 magnitude earthquake shook the small nation of Haiti. The massive damage done to buildings and infrastructure was exacerbated by the poor condition that most buildings were already in, and the estimated death toll ranged from 220,000 to 316,000 people.

United Nations peacekeepers flocked to Haiti in response, and locals prepared for them in a similarly swift manner. As a consequence, many peacekeepers arrived without undergoing proper medical testing or screening beforehand. Local contractors built peacekeeper housing on the fly.

Taken together, these rush jobs would prove to have a much longer-lasting negative impact than the earthquake that started it all. 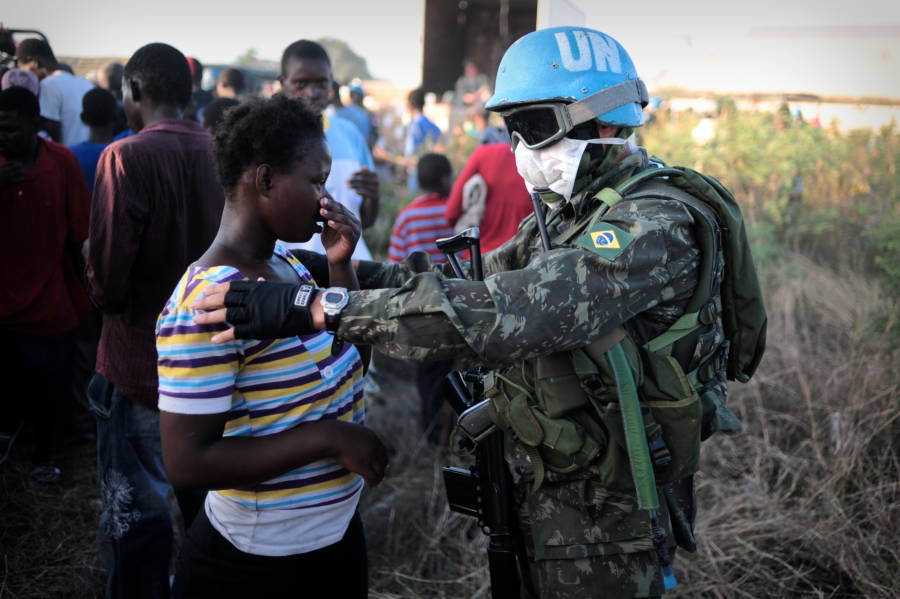 FRED DUFOUR/AFP/Getty ImagesA UN peacekeeper holds a Haitian woman as she lines up for aid at an old military airfield in Port-au-Prince on January 23, 2010, the same day that UN troops fired warning shots and sprayed tear gas on Haitian earthquake survivors after a food delivery to hundreds of them spiraled out of control.

Soon enough, Haiti had a sewage problem as a result of UN peacekeeper presence. And according to a UN report leaked to the Guardian in November of 2010 called the Minustah Environmental Health Assessment Report, the UN knew all about it.

Specifically, the UN knew that sewage was being dumped into rivers, and that toilets and soap were in short supply. The report furthermore stated that “poor oversight of contractors carrying out this work has left the mission vulnerable to allegation of disease propagation and environment contamination.”

Waste soon began to contaminate the Meille River, which flows into the Artibonite River, the largest in Haiti. It wasn’t long before cholera’s Vibrio cholerae bacterium found its way, via fecal matter, into the water that the earthquake-devastated population was using for drinking and bathing.

“Within a few days, the time required for disease incubation, more than 10,000 suspected cholera cases were recorded in health facilities located along the river,” according to a July 2016 study from Assistance Publique – Hôpitaux de Marseille, a French public health institution.

As if that first rush of disease wasn’t enough, one in ten UN camps were still putting sewage into the environment a month after it was clear that cholera was coming from the UN peacekeeping camps, the Guardian reports.

Thus, cholera quickly ran rampant around the country — for the first time in 150 years — and the UN refused to acknowledge that it was at fault. 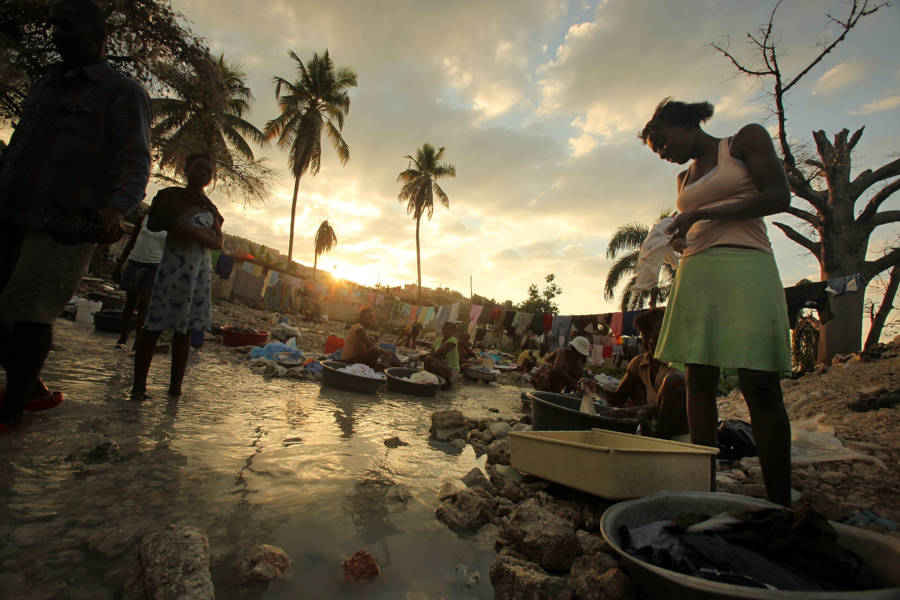 Although cholera can be deadly, it is relatively easy to prevent and treat.

The disease spreads via food and water containing the fecal matter of an infected person. Thus, the disease is not uncommon in places with poor water treatment, sanitation and hygiene, like post-earthquake Haiti.

Nevertheless, a 2016 Yale study found that the whole outbreak in Haiti could have been prevented with a health kit and screening test that cost less than $3.54 per person — around just $2,000 total — and could reduce the risk of a cholera outbreak by 98 percent.

Despite that known easy fix, the UN did not and still does not have a cholera screening routine in place.

“Our research suggests that screening and/or prophylaxis of peacekeepers are the most effective ways of preventing the inadvertent spread of cholera, but the UN has yet to implement either of these policies,” Virginia Pitzer, senior author of the Yale study, writes in the report. “Nor have they been transparent about the reasons why they are reluctant to do so.”

And six years later, the cholera epidemic still rages on in Haiti. 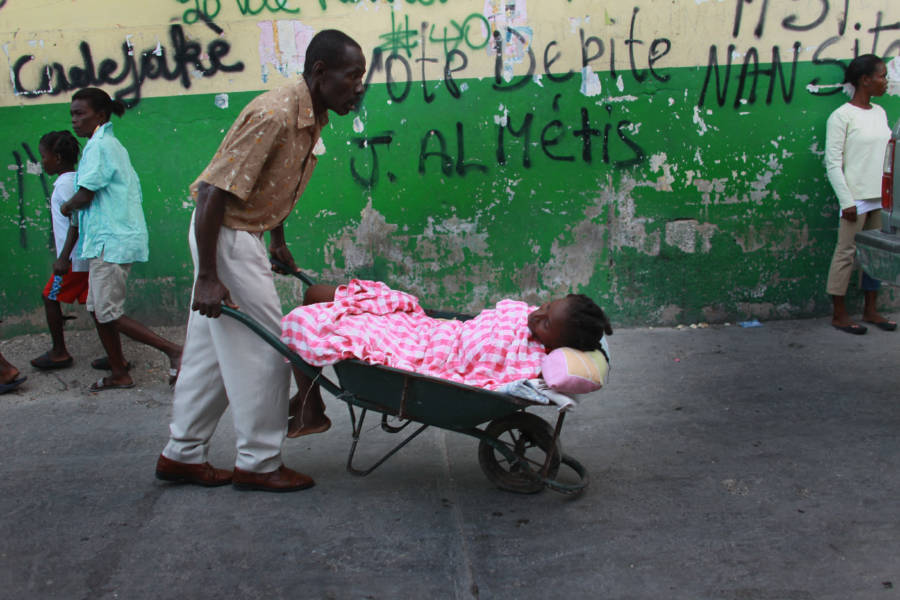 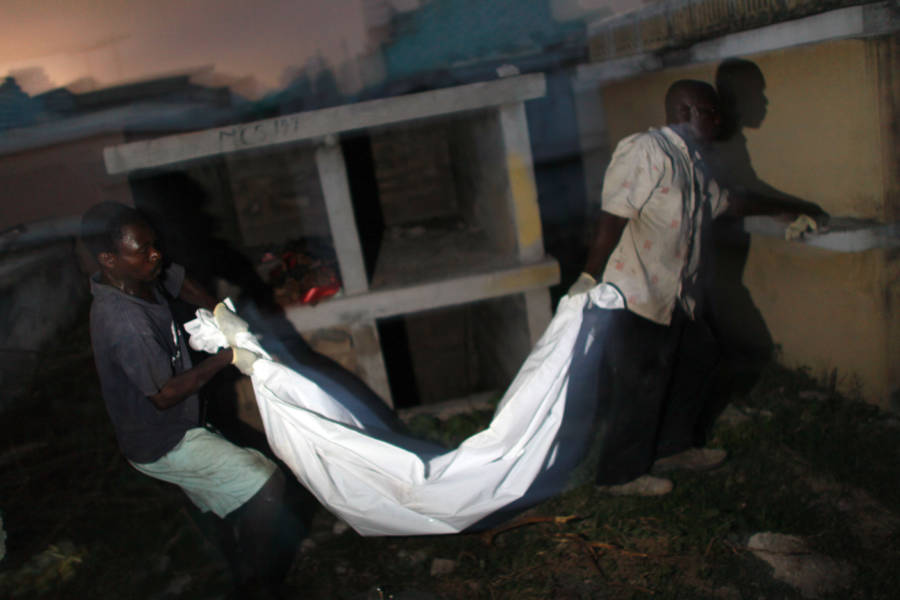 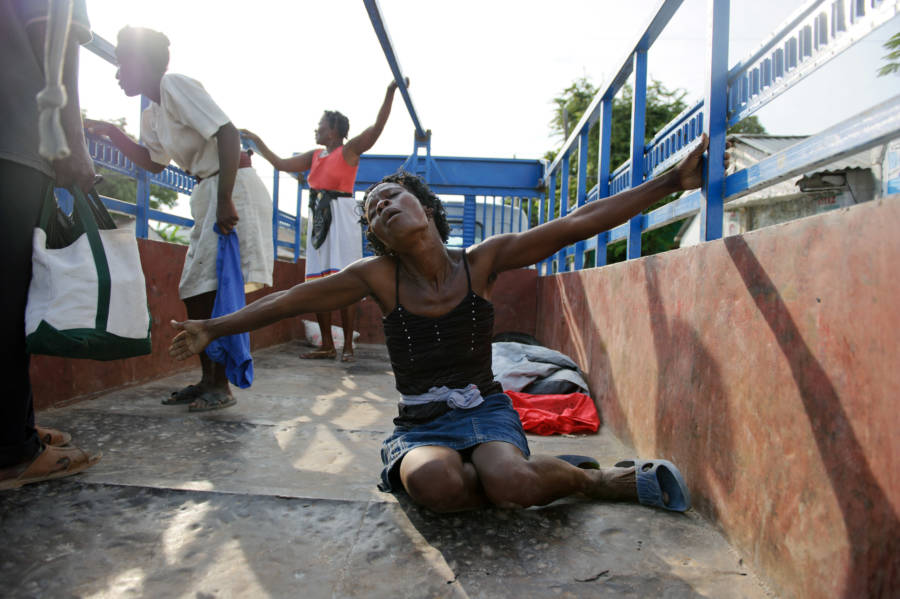 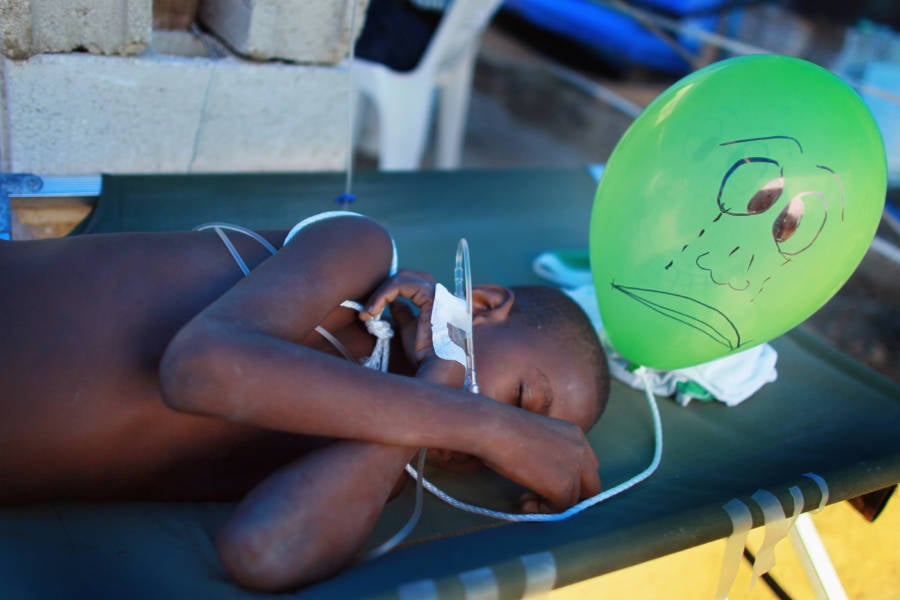 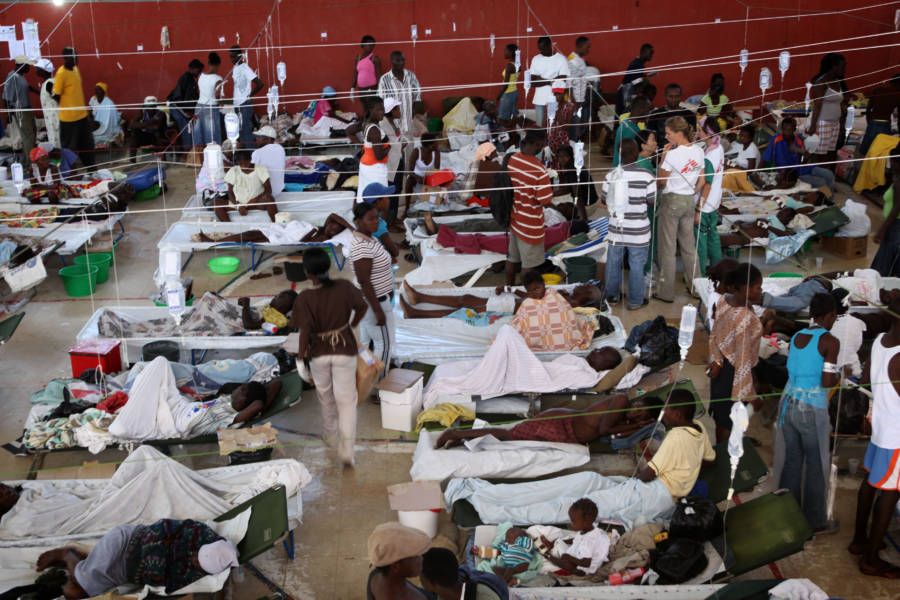 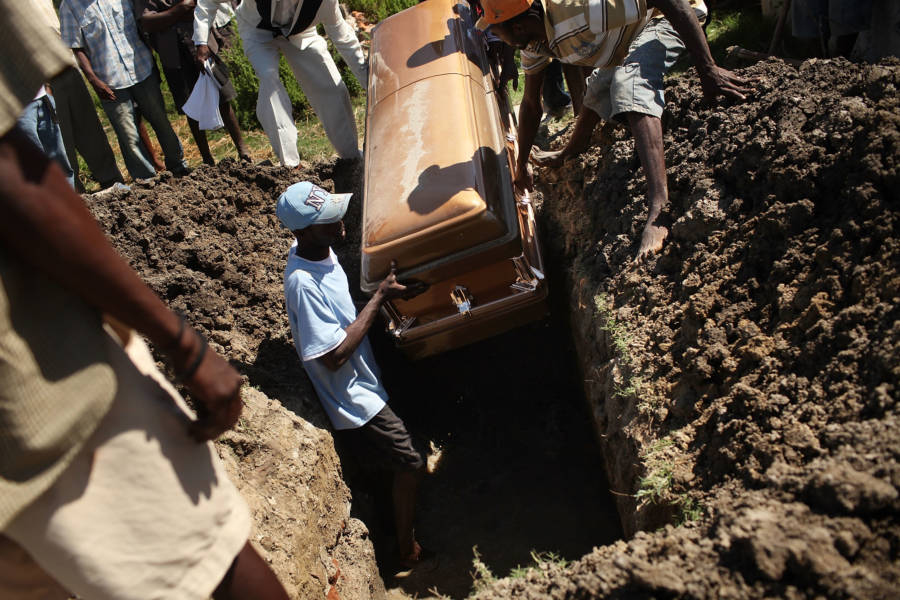 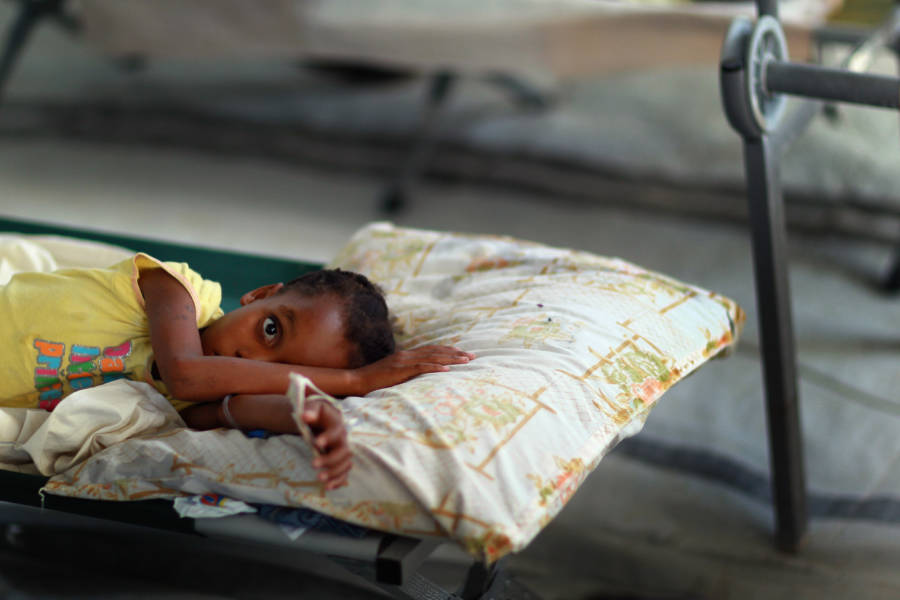 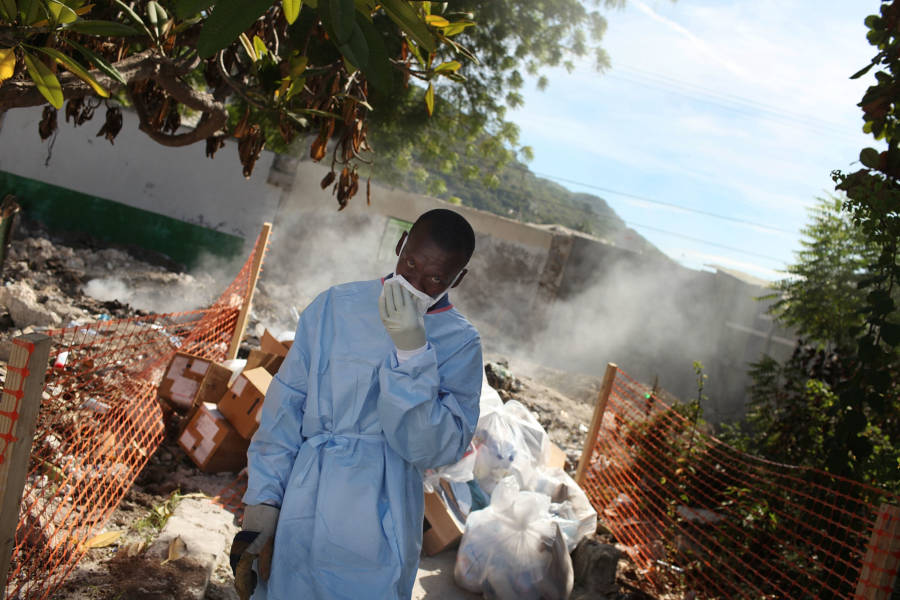 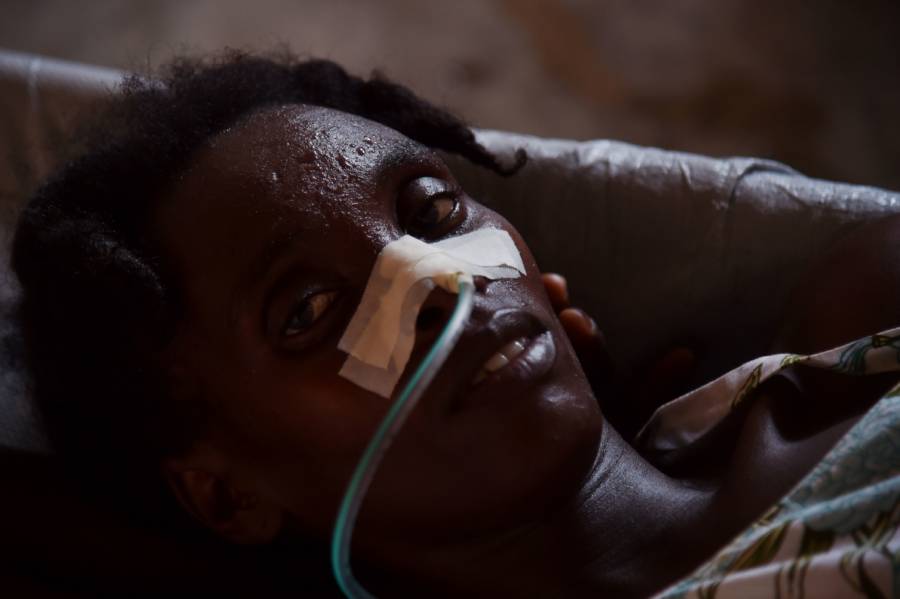 In 2013, despite the UN's fatal missteps, it looked as if Haiti's cholera epidemic was finally under control. But, the following year, a confluence of poverty and poor management brought the disease back.

Near the capital city of Port-au-Prince, "a main pipe network was severely damaged by gangs engaged in the trade of water," the Assistance Publique - Hôpitaux de Marseille study reports. "The gangs, instead of selling water from catchment sources, willfully damaged the mains water network and then pumped water into trucks for delivery to other neighborhoods."

While this local activity may have exacerbated things, the fact remains that cholera wouldn't be latent in Haiti's water supply in the first place if it weren't for the UN peacekeepers who travelled there in 2010. Now, one in every 16 Haitians has been infected. The UN has denied responsibility throughout.

In November 2011, a group of Boston lawyers organized under the Institute for Justice and Democracy in Haiti sued the UN on behalf of 5,000 cholera victims. The lawsuit demanded water and sanitation systems, compensation for those impacted by the disease, and a public apology. The UN Office of Legal Affairs said simply that the claims were "not receivable."

So, the group took the lawsuit to the United States federal court in New York, but the UN didn't show up, citing its diplomatic immunity under Section 29 of the Convention on the Privileges and Immunities of the United Nations. Section 29 states that the UN and any UN worker who is doing official work has legal immunity in the countries in which it operates. 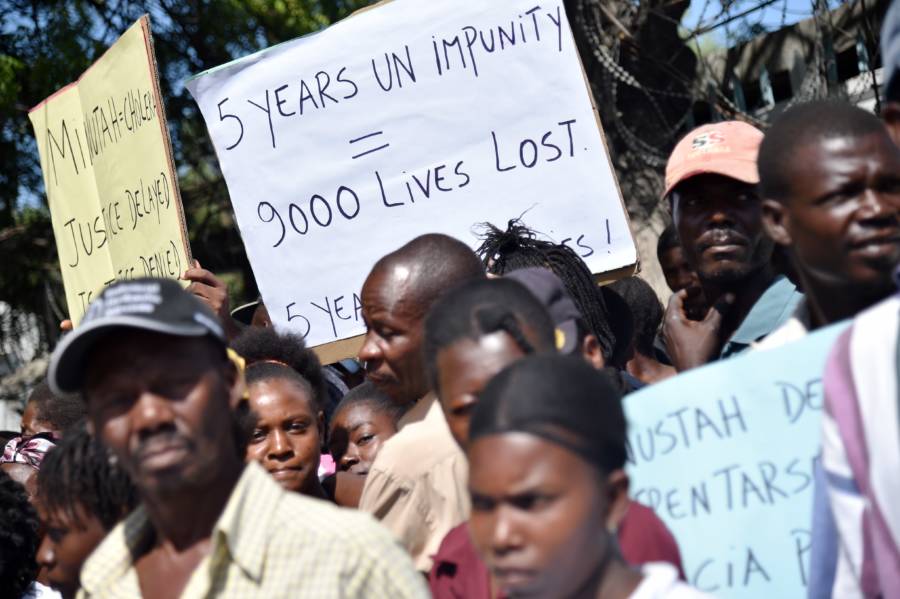 HECTOR RETAMAL/AFP/Getty ImagesHaitian human rights activists and cholera victims rally in front of the Log Base of Minustah (United Nations Stabilization Mission in Haiti), in Port-au-Prince, on October 15, 2015, to demand justice and reparations.

That's how the UN could sidestep the issue for years. Last month, however, Philip Alston's report put a price on the UN's actions, a number large enough to get the UN to offer some sort of plan to combat the cholera epidemic.

Alston's report estimated the cost to compensate the officially reported 10,000 people killed and 800,000 infected would cost around $40 billion. And that figure doesn't even account for the cases that weren't officially reported, and the cases that will happen in the future. But $40 billion is nearly five times the annual budget for UN peacekeeping missions, so the full cost certainly won't be realized.

What comes from Ki-Moon's acknowledgment remains to be seen. Meanwhile, the UN-caused epidemic rages on.

Next, read up on seven diseases that are becoming far more threatening thanks to climate change. Then, have a look at six of the most bizarre and interesting diseases to have ever ravaged humanity.