The Collyer Brothers: The Original Hoarders Of The 1930s

The Collyer brothers holed up inside their house for more than a decade, amassing 120 tons of junk that ultimately killed them. 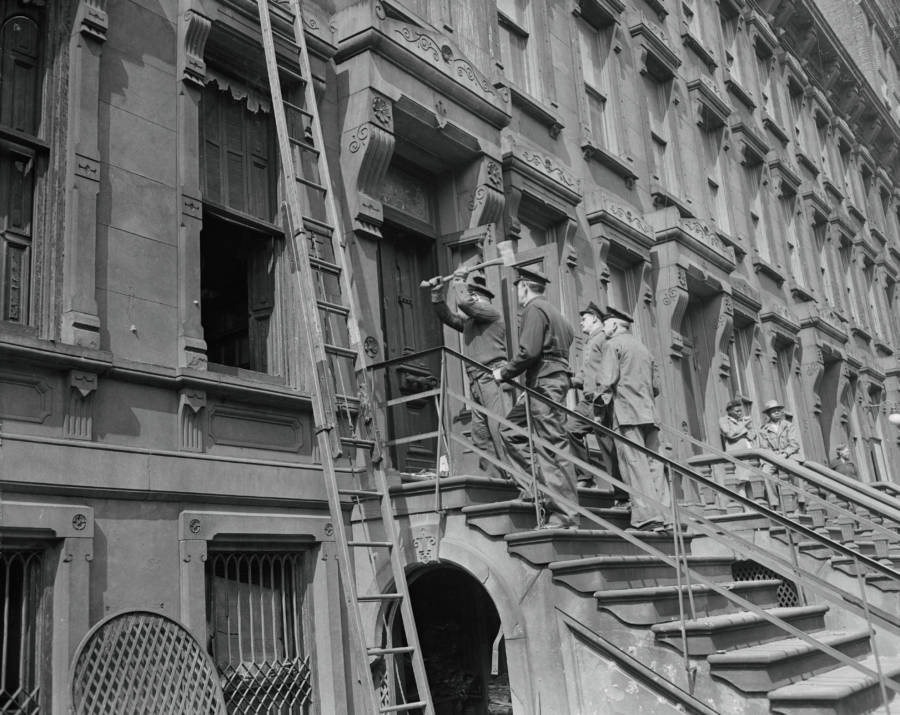 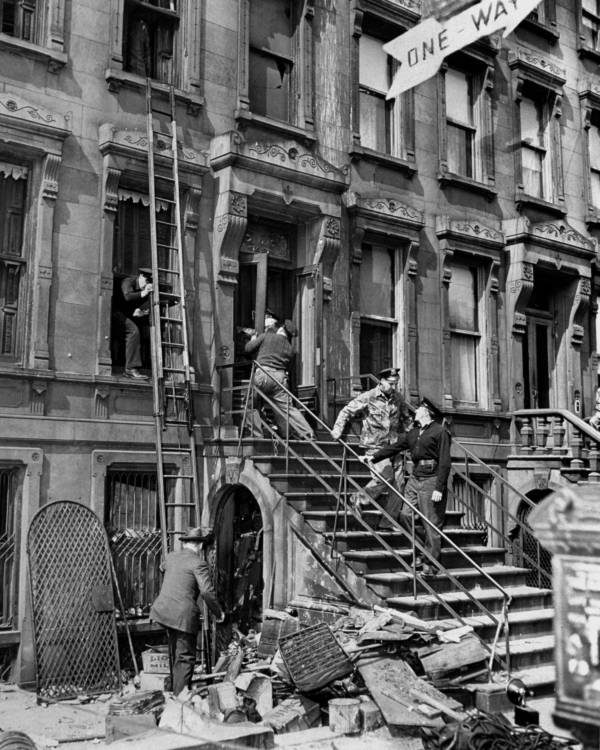 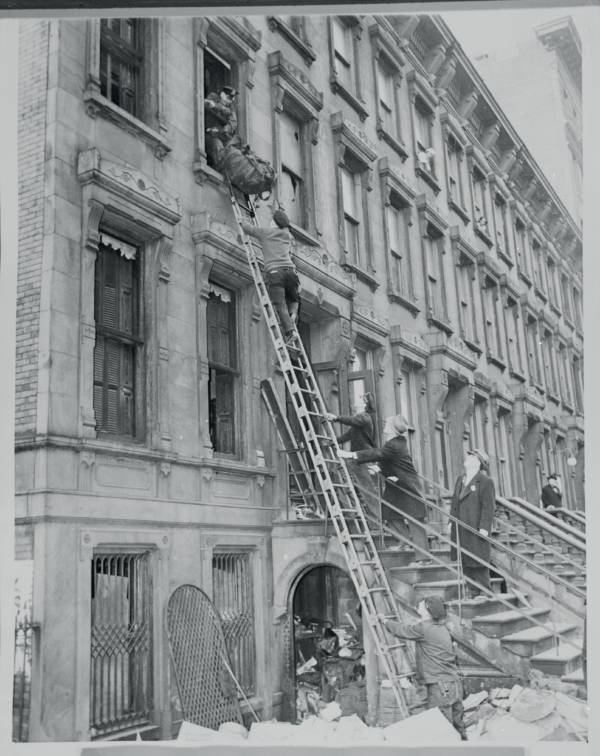 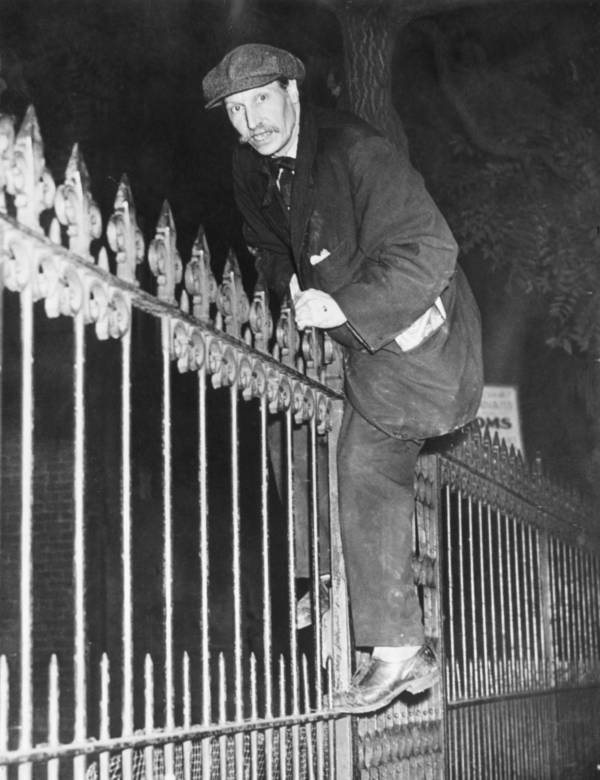 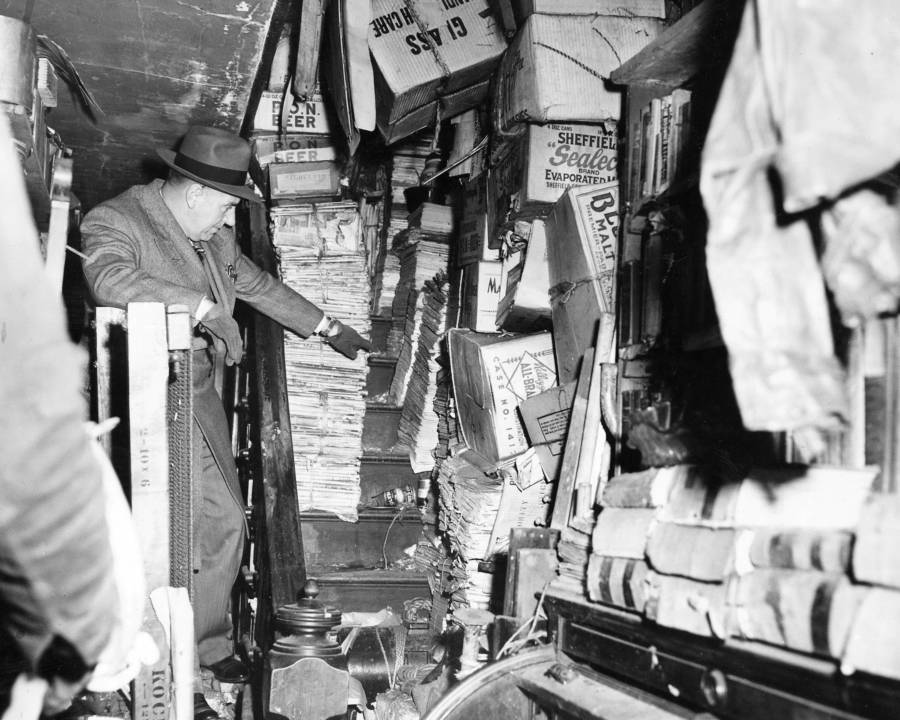 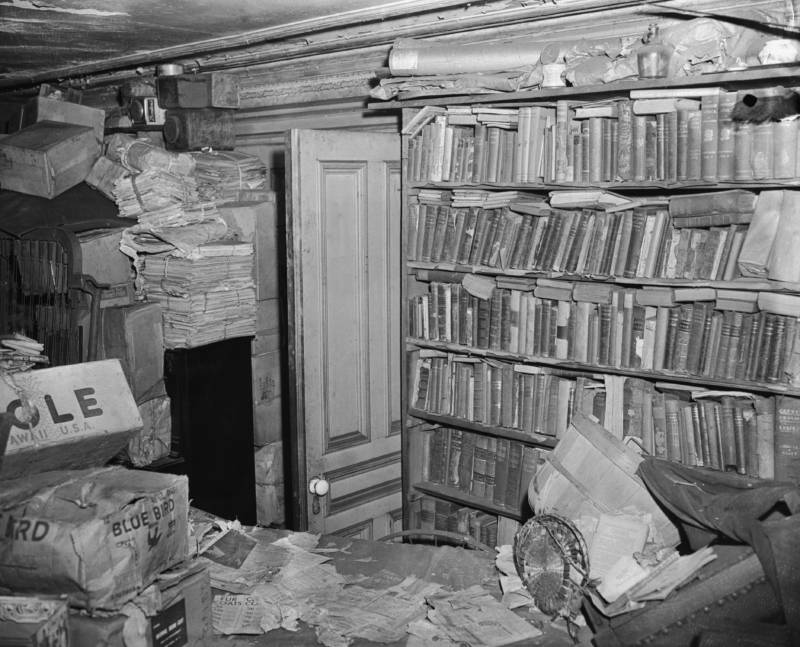 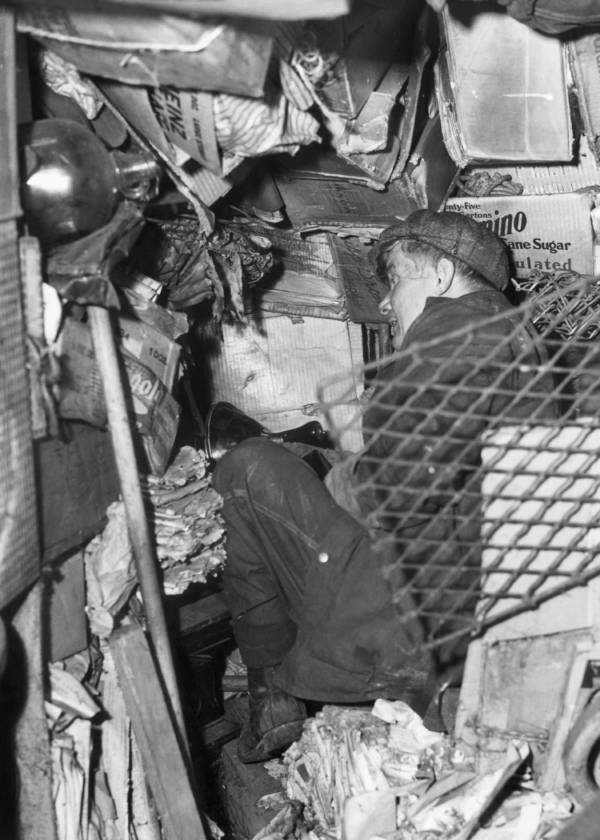 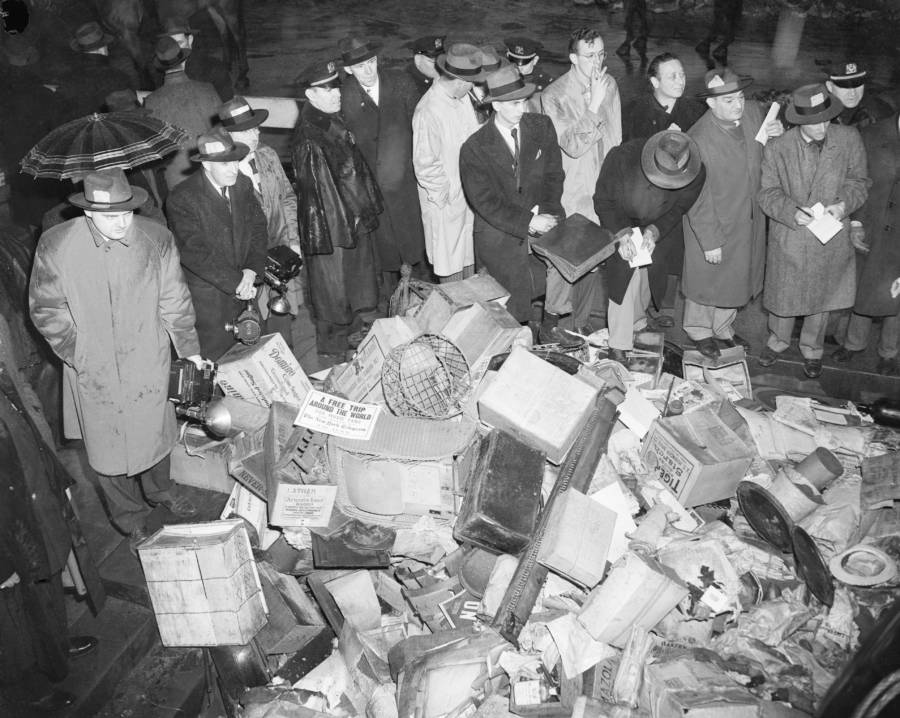 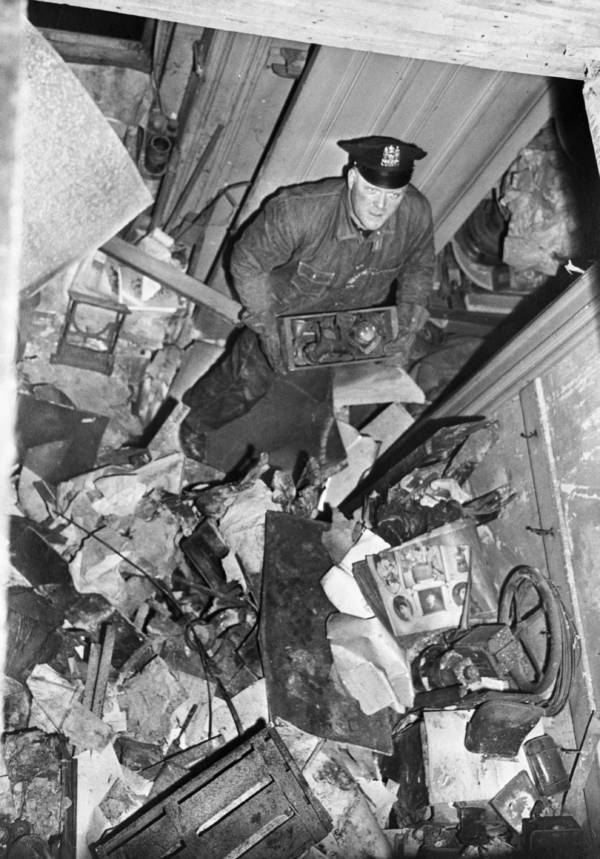 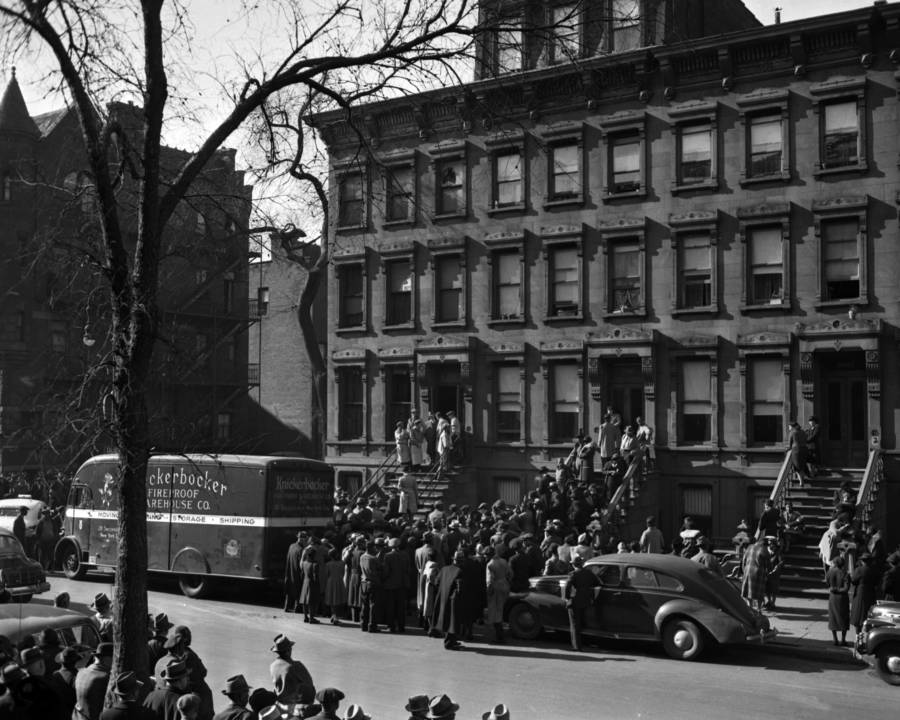 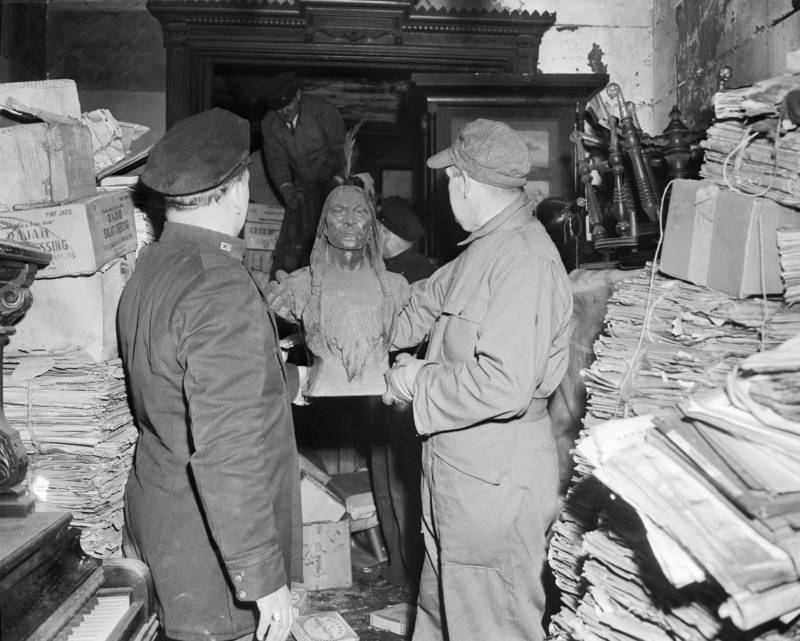 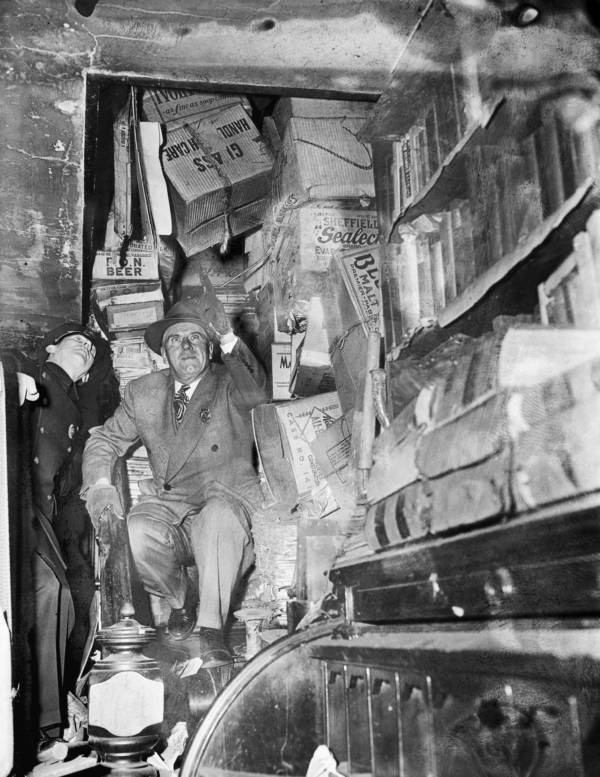 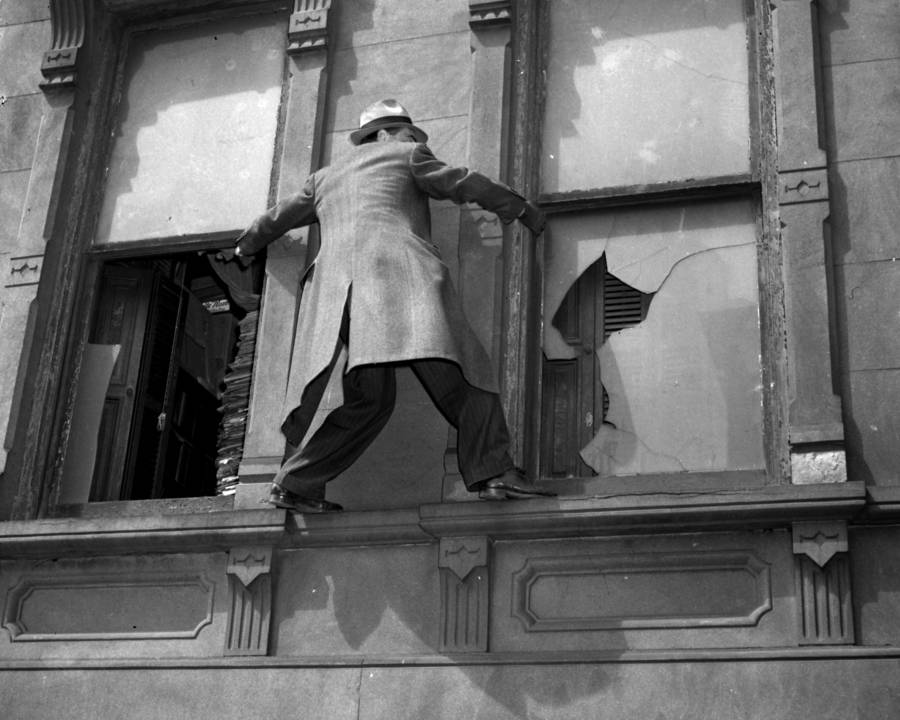 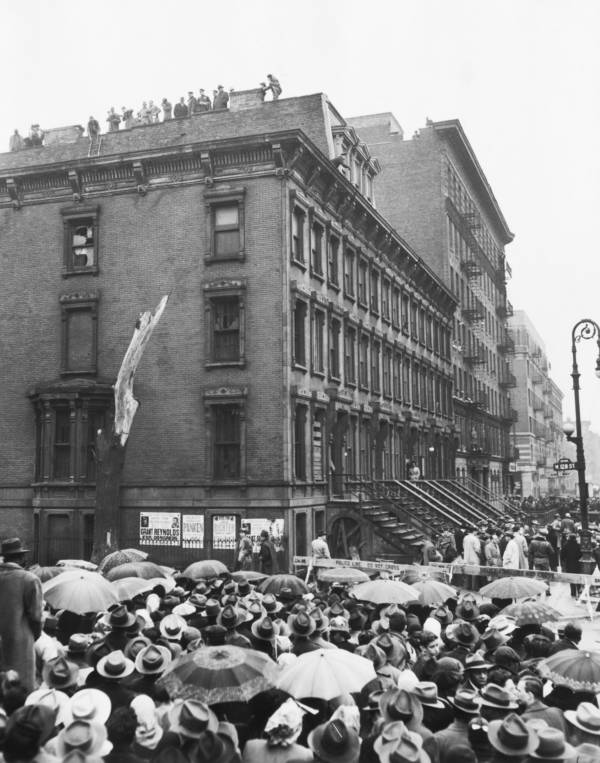 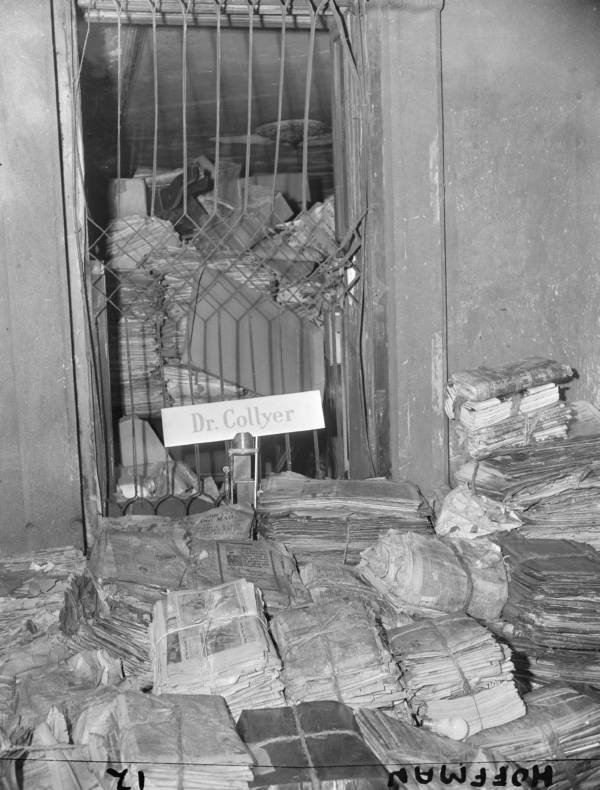 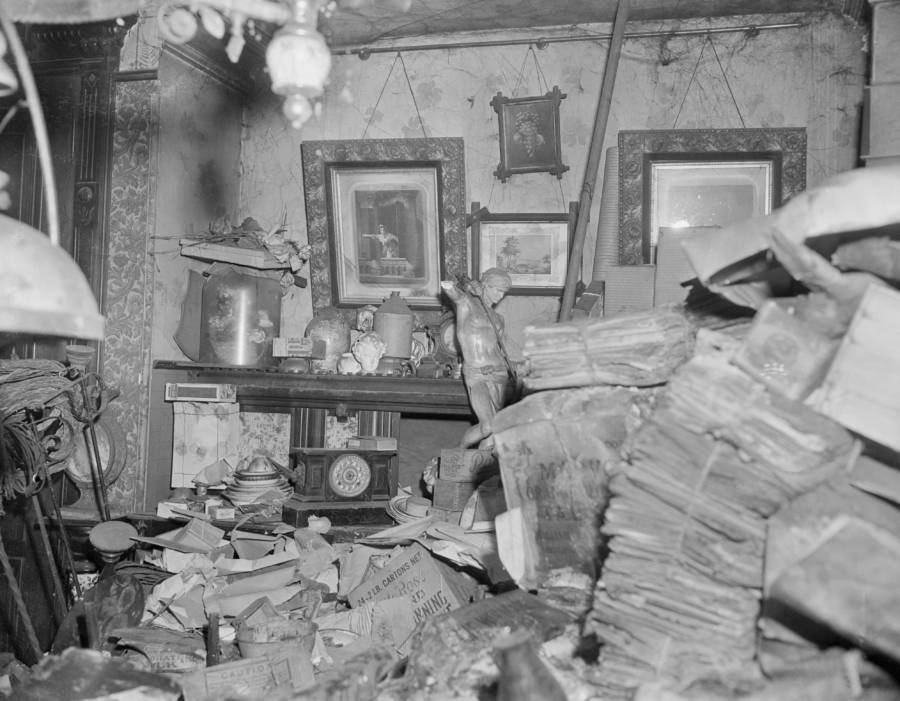 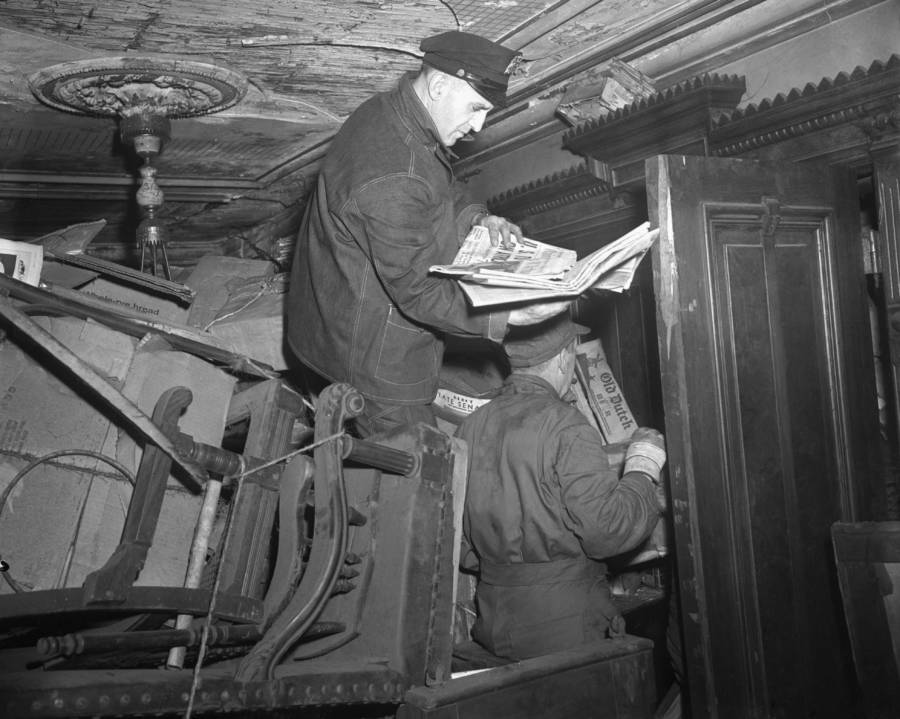 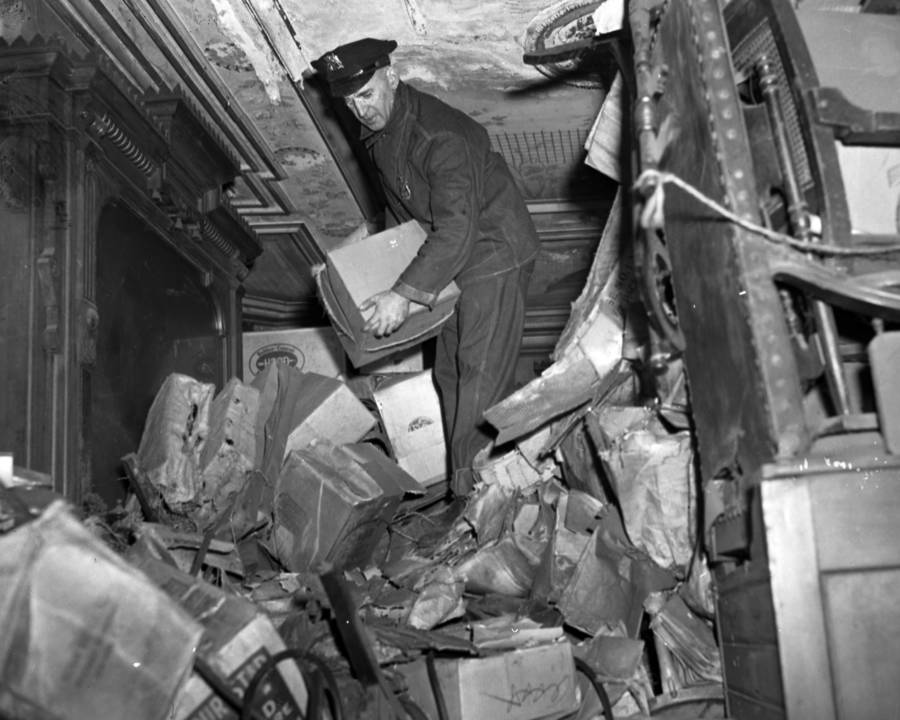 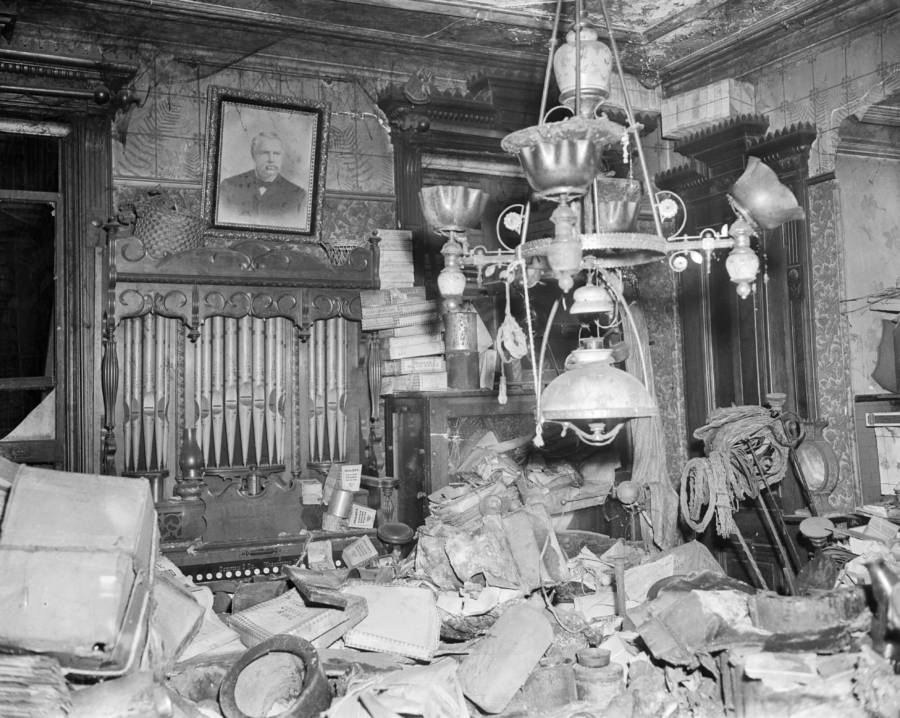 The Collyer Brothers: The Original Hoarders Of The 1930s
View Gallery

On March 21, 1947, an anonymous man called New York's 122nd Police Precinct to complain about the smell of decomposition emanating from the dilapidated old house at 2078 Fifth Avenue. Because locals had often called the police about the strange goings-on at this same house before, the precinct didn't hesitate to send an officer.

Once there, however, the policeman couldn't even find a way inside. The windows were reinforced with iron bars, the telephone and doorbell were missing, and the entryway was filled with a pile of junk — newspapers, boxes, chairs — so impenetrable that the six other men who'd now arrived on the scene couldn't even make their way through it at first.

Finally, as the men began tossing the junk out onto the street below, a patrolman broke in through a window on the second floor. Then, after fighting through more of the same junk piled all the way to the ceiling, they found the body of Homer Collyer.

He'd been dead, of starvation and heart disease, for approximately ten hours. It had taken the police five hours of digging through the junk to find his body.

Police, newspapers, and locals alike quickly suspected that Homer's brother, Langley, was both the anonymous tipster and the killer. The brothers had been known to live together for more than a decade, but now, Langley was nowhere to be found.

Rumors began to spread that Langley had boarded a bus to Atlantic City, New Jersey, sending the police on a manhunt into that state and, ultimately, eight others. They turned up nothing.

Meanwhile, back at 2078 Fifth Avenue, authorities turned up nothing but more of the same junk. Crowds as large as 2,000 gathered on the street to watch workmen cart everything from newspapers to a piano to an X-ray machine to even more newspapers out of the house. In the end, they removed at least 120 tons of refuse, more than the weight of a blue whale.

After nearly three weeks of this cleanup, on April 9, laying inside a two-foot-wide tunnel made of drawers and bed springs, a workman found the body of Langley Collyer. Despite both a region-wide manhunt and an intensive search of the Collyer brothers' own home, there Langley was, just ten feet from where his brother had been found weeks before, obscured by the mounds and mazes of junk that had consumed the rotting house.

Authorities estimated that he'd died on March 9, nearly two weeks before Homer, and was the actual source of the smell that prompted the anonymous tipster's call and brought to light this hoarder's den unlike anything the world has seen before or since.

Though their den didn't come to light until 1947, the Collyer brothers began sealing themselves inside this Harlem apartment all the way back in the early 1930s. Over the ensuing years, the brothers gained infamy in the city for their bizarre habits, namely hoarding massive amounts of junk inside their home and building booby traps to protect it.

Things, however, weren't always so strange. Homer Lusk Collyer and Langley Wakeman Collyer were born in 1881 and 1885 respectively. They were born to a Manhattan doctor, and lived in tenements for the early part of their lives, while their father was still in medical school. When their father started to work at Bellevue Hospital, the brothers moved with their family to the brownstone at 2078 Fifth Avenue in Harlem. Both brothers attended Columbia University, where Homer studied maritime law while Langley studied engineering and chemistry.

When their parents separated in 1919, Homer and Langley, who had never married or lived alone, chose to stay with their mother in the Fifth Ave apartment. A few year later, in 1923, their father died, and left them with his cache of medical instruments and books. Their mother died six years later, and after her passing, the brothers continued to live in the brownstone they had shared with her.

At this point, the brothers had still not fully withdrawn from society. Homer continued to practice law, while Langley bought and sold pianos. Homer even purchased the property across the street from their Harlem residence, with the intention of turning it into an apartment building.

Their normal, if slightly odd, lives were derailed when, in 1932, Homer suffered a stroke that caused him to go blind. This led Langley to quit his job in order to take care of his brother full time. They had already begun to withdraw from the neighborhood around them, due to their fear of the new — predominantly Black and poor — community that was beginning to appear in Harlem. But it was after this blindness struck, that the two brothers fully withdrew.

Langley took care of his brother as best he could, but the two of them flatly refused to see any doctors. Langley would feed Homer a diet of 100 oranges a week, black bread, and peanut butter, which he claimed would eventually cure his brother's blindness. He would also read literature to his brother, and play him classic sonatas on his piano.

At this point, the Collyer brothers had lost any source of income, and the city had shut down their utilities for failure to pay. Langley, who was a skilled engineer, then jerry-rigged an old Ford Model T the family had owned to act as a generator for the house. He would use pumps at local parks as a source of water, and used a small kerosene heater to warm their house.

Langley's mental stability then began to deteriorate, and he stopped leaving the house before midnight. In his trips across the city at night, Langley would also pick up a great deal of junk and bring it back to the house.

He would hoard items including baby carriages, rusted bikes, records, and empty bottles and tin cans. He would purchase and hoard thousands of unused instruments, books, and fabrics. He also would collect stacks and stacks of newspapers that he stated were for when Homer would regain his sight.

The Collyer brothers' eccentricities brought them infamy within the neighborhood. The stories then gained widespread attention in 1938, when The New York Times reported that they had turned down an offer of $125,000 for their Harlem brownstone, an entirely untrue claim. Within the article, the Times implied that the brothers had amassed some kind of great material wealth within their home.

This article generated a huge amount of attention around the Collyer brothers, and led to a number of burglary attempts on the house. Langley, with his engineering knowledge, built a huge number of intricate booby traps to deter would-be thieves. After some neighborhood kids threw rocks through a window, the brothers boarded up all the windows and wired the doors shut.

Despite living in destitution, the Collyer brothers seemed to have a considerable amount of money saved up for extreme circumstances. When neighbors began to peek in on the brothers, they paid $7,500 in cash (roughly $120,000 today) for the neighbors' house. When, in 1942, their bank eventually broke down the front door of their house in order to foreclose on the property, because the brothers had stopped paying their mortgage, Langley was waiting for them inside with a check for $6,700 ($104,000 today) to pay off the entire mortgage.

At this point, the house had become so filled with junk that it was impossible to enter through the front door, and trash was overflowing out of the house. The two brothers lived in, and slept in, nests that they had built amid this mass of trash.

Langley spent his time during the day working on his inventions, including a device for vacuuming inside pianos, as well as building tunnels and passageways through the piles of rubbish throughout the house, and tinkering with the booby traps he'd set up.

Eventually, these traps are precisely what did him in. Authorities believe that while Langley was bringing food to Homer via one of his tunnels through the massive pile of trash within the house, he must have tripped one of his own booby traps, causing a fatal cave-in. And without his brother to provide him with food, Homer soon died from starvation.

Three months later, the house was razed and the last physical evidence of the Collyer brothers peculiar palace of junk was gone.

Nowadays, the site of the Collyer brothers' house has long served as a small pocket park, named in their honor. When the Harlem Fifth Avenue Block Association sought to change the park's name in 2002, Parks Commissioner Adrian Benepe summarized the strange little place that the Collyer brothers hold in New York lore, saying, "Sometimes history is written by accident... so there are some historic names that are not necessarily celebrated. Not all history is pretty -- and many New York children were admonished by their parents to clean their room 'or else you'll end up like the Collyer brothers.'"

For more of New York in the 1930s, read the tale of "Dead Shot Mary". Then, see 55 heartbreaking images of New York during the Great Depression.