Sol Pais, the young woman who threatened Columbine High School with a shooting before killing herself, is just the tip of the iceberg when it comes to "Columbiners." 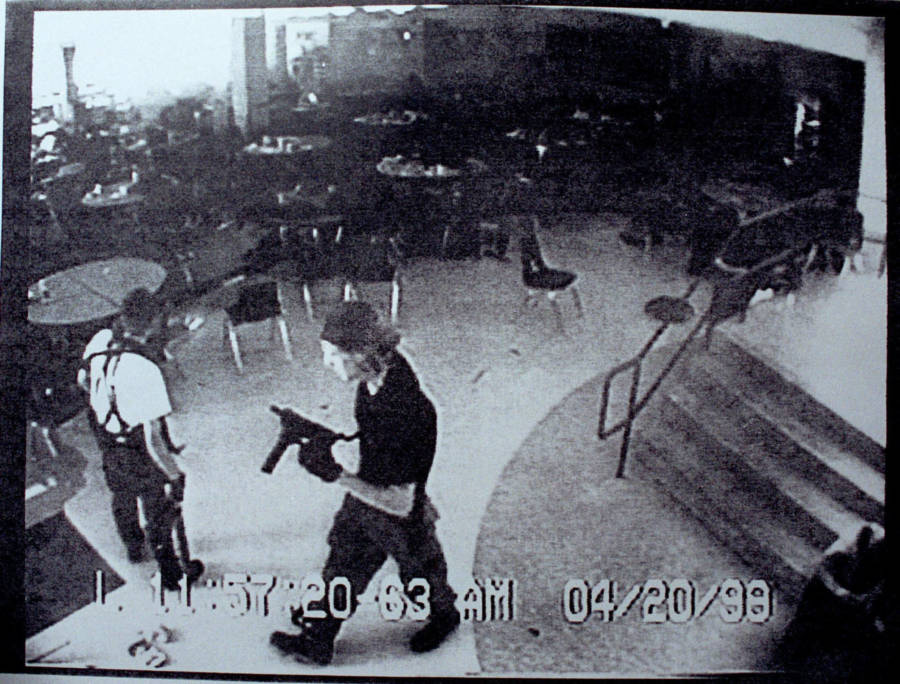 It’s been 20 years since the Columbine High School massacre stunned an entire nation. Much in the same way that many claim that the peace-and-love 1960s died with the Manson Family murders of 1969, the calm and prosperous 1990s may very well have died with Columbine.

Once students Eric Harris and Dylan Klebold waltzed into their Littleton, Colorado school on April 20, 1999 — armed with homemade explosives, pistols, shotguns, and automatic weapons — 12 students and one teacher lost their lives. Many other students were wounded, some even paralyzed.

While the initial plan was to set off two 20-pound propane bombs in the school cafeteria as the two shooters awaited fleeing victims in the parking lot, things didn’t go according to plan.

The primitive bombs, built in accordance with online instructions, didn’t go off. The two were forced to improvise. They entered the premises, armed and dressed in black, and commenced their spree of wanton murder. Their crimes would be immortalized in the media, pop culture, and eventually, online. 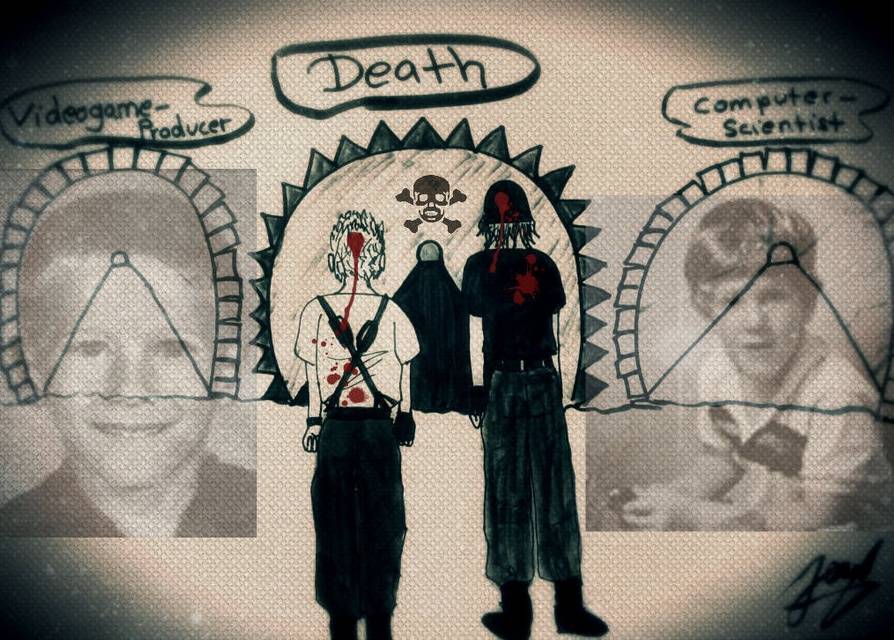 The massacre at Columbine marked America’s first televised high school shooting. The whole country watched as unconfirmed reports trickled in, and authorities waited to storm the building. When they finally did, Harris and Klebold were already dead — evading due process via suicide, leaving grieving families behind.

At the time, there was renewed awareness of how violent video games, films, the so-called Trenchcoat Mafia, and pop culture might contribute to the psychological vulnerability of kids like Harris and Klebold. The collective discourse seemed to conclude with the notion that rebellious killings were becoming in vogue — and had to be staved off.

Hindsight blatantly tells us now that a cult surrounding these infamous, iconic figures of late-20th-century teenage youth would inevitably spring up. With the recent Sol Pais incident and a massive trove of Columbine fan art online, however — the phenomenon of “fans” of the massacre known as “Columbiners” has reached unexpected heights.

Columbiners — those misguidedly inspired by or infatuated with Harris and Klebold’s 1999 killing spree — have largely been relegated to easily avoidable corners of the Internet. Anime-influenced caricatures of the shooters, replete with seemingly-endearing text in cartoonish speech bubbles, comprise the majority of their content.

Countless forums and dedicated websites are frequented by enthralled users who fetishize the Matrix-esque fashion choices of the shooters. The racist comments and Nazi-derived ethos of Harris, too, are often referenced as positives — a blatant subversion of politically correct standards.

According to Broadly, however, there’s a sizable portion of Columbiners who are primarily drawn to this understandably despised niche by its sense of community. Being a teenager isn’t easy, and many kids claim that the simple sharing of drawings and having a safe space to share their gloomy outlook on life gives them comfort and solace. 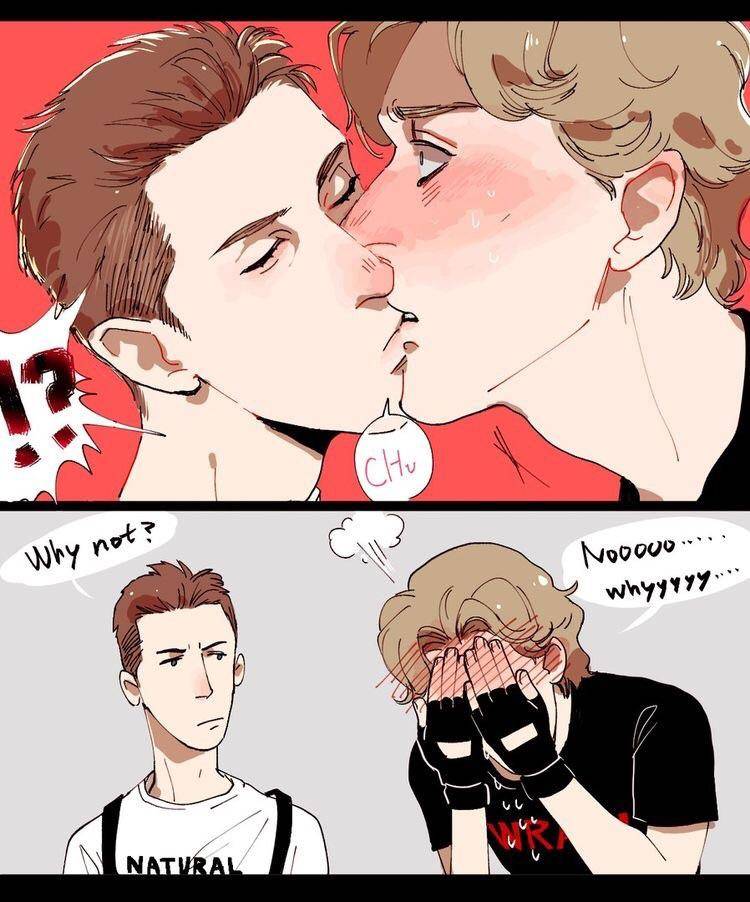 “I relate to their feelings of hopelessness, being angry and not being able to change it, and wanting to be accepted and appreciated,” said 18-year-old Trisha. “No one noticed they were struggling, and no one took their suffering seriously,” added 16-year-old Emily.

These teens, likely unable to process and comprehend the horrific realities of the actual event — which occurred before they were born — are essentially drawn to the empathy and compassion they feel in this community, most likely.

Many of these Columbiners have no positive feelings about the massacre, but are instead focused on the troubled inner lives of its perpetrators because they see themselves in them. 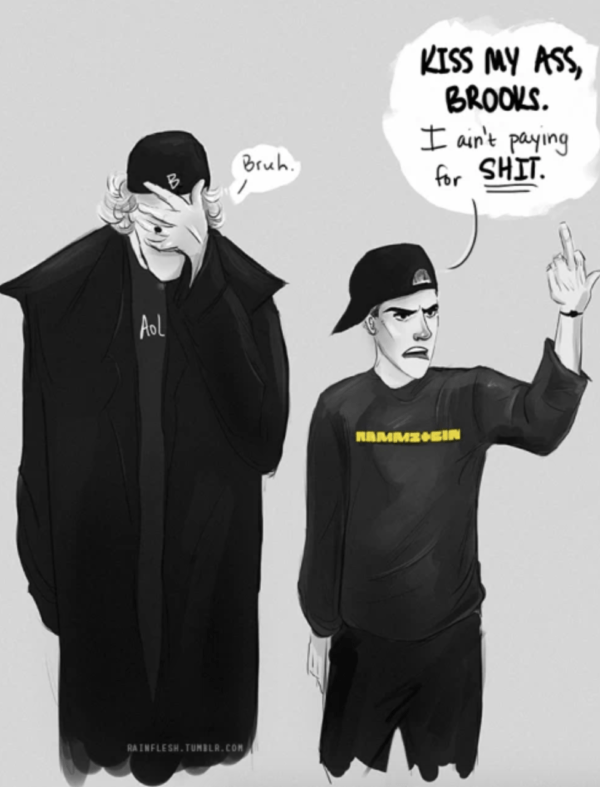 Tumblr/rainfleshColumbiners fan art depicting Klebold as embarrassed and shy, and Harris as aggressive and loud.

Naturally, these sentiments are often seen as supportive of the school shooting, but a large portion of these teens have simply misplaced their own internal angst onto Harris and Klebold in an effort to express their own distress, and seek out others who feel similarly confused.

“If you have a mental illness, its easy to see yourself in (the shooters) or relate to them,” said 22-year-old Ada. “I don’t have any close friends,” said 16-year-old Natalie. “I know what it feels like to be an outcast,” added a 22-year-old who owns a blog called columbinekings.

“Reading Dylan’s writing was like reading things from my own head.”

Of course, the Columbiners phenomenon also reveals how easily young minds can be molded into worshipping dubious — to say the least — heroes. Many Columbiners are girls who seem to have a predilection for wanting to feel like saviors to boys like Harris and Klebold.

If only they could go back in time to tame Klebold and Harris, some believe, bloodshed would’ve been prevented. This notion is one shared by countless Columbiners on Tumblr, Instagram, and other social media platforms. 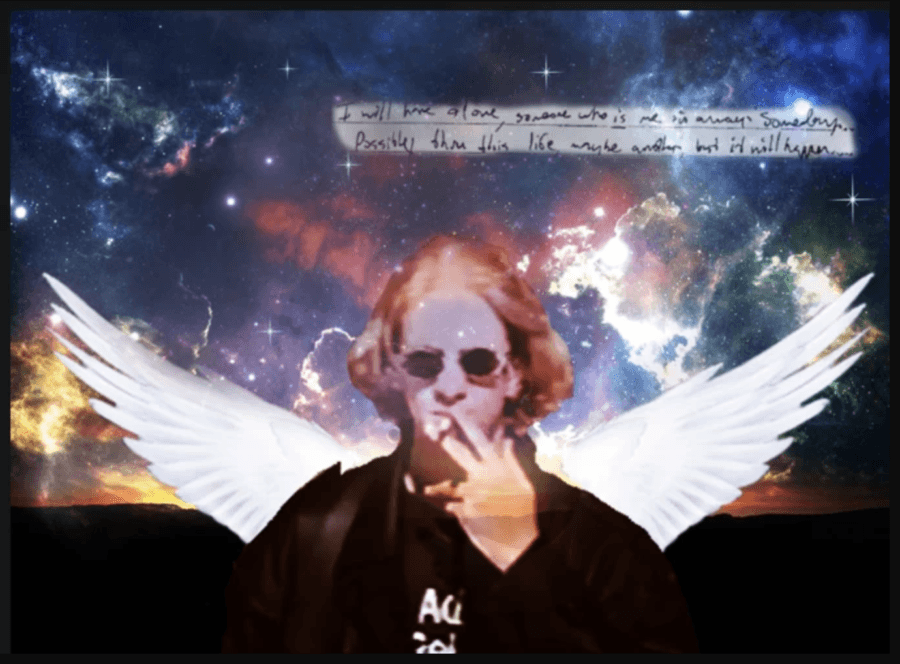 Tumblr/rebvodka-closet-admirersDylan Klebold, portrayed as an angelic victim who could’ve been saved.

It strongly recalls one of its pre-Columbine counterparts: Ted Bundy fans, Charles Manson’s Helter Skelter crew, and a whole roster of similar killers who garnered inexplicable idolization from misguided cults of young fans.

“Do you ever want to go back to 99, find Dylan Klebold, and just hug him? Or tell him how precious and beautiful he is?”

The kind of desperate urge to reform dangerous individuals exemplified above has been psychologically identified as hybristophilia — more commonly known as Bonnie and Clyde Syndrome. Those attracted to people who’ve physically or sexually hurt others naturally gravitate to the more famous examples of said perpetrators because there’s an added appeal of fame. 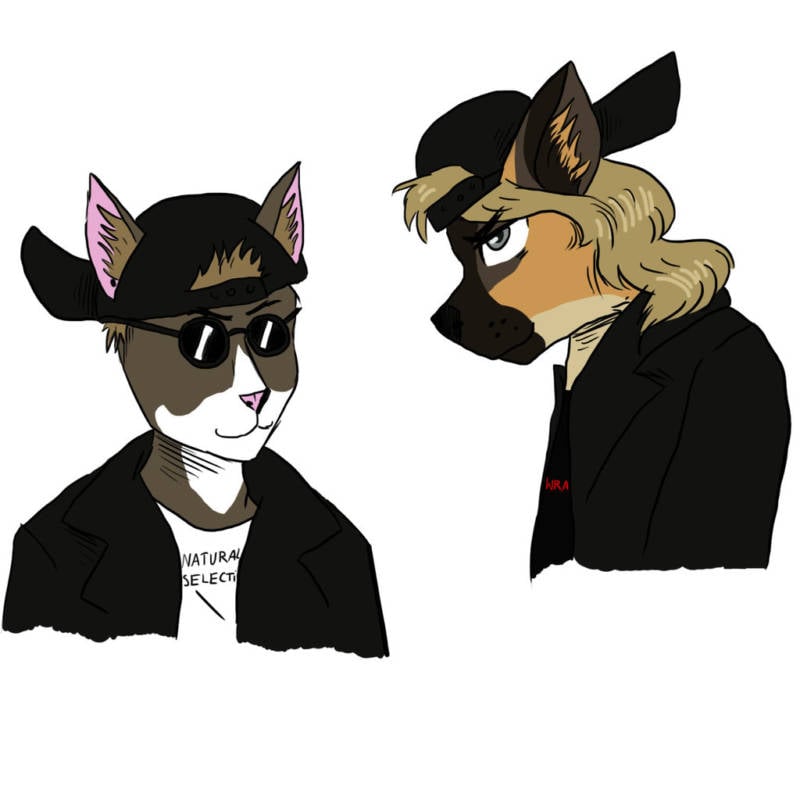 A similar thing to that which drew youths of the 1950s to bad boys like James Dean and his rebellious fictional characters — or to Eminem via his fictionalized accounts of violence in the late 1990s — is at play with Harris and Klebold.

The difference is the stark divide between fact and fiction. But to those born in the 2000s, Columbine seems distant, and all that’s left is a flurry of mythologized narratives online. Perhaps, to some young people today, Columbine might as well be fiction.

“Eric awakens the part of me that likes to be scared and I’m like yes kill me do your worst I love you!” 16-year-old Kelsey said. 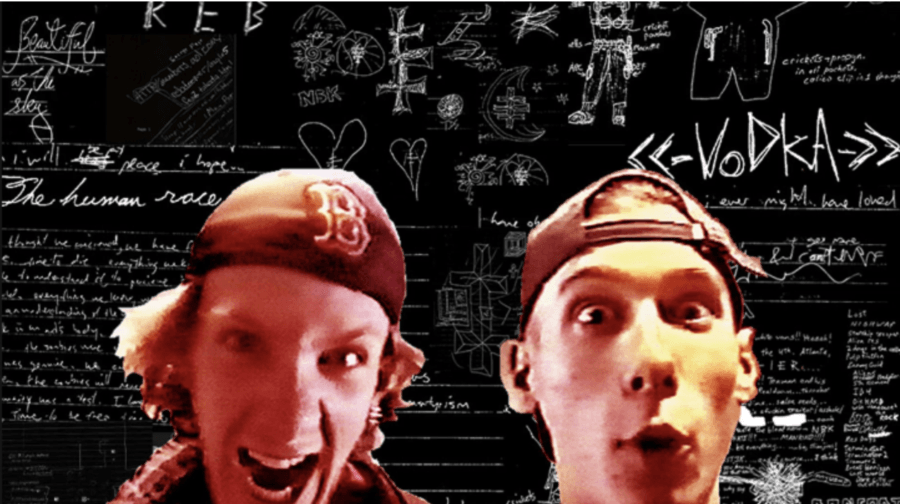 While the heavily shared fan art, with its sexual feeling for and positive representation of the Columbine shooters, may be disconcerting, the recent Sol Pais incident marked a troubling instance of this online fetishism forcing its way into the real world.

Sol Pais: A Columbiner In The Real World

According to CBS, 18-year-old Sol Pais made credible threats of violence against schools in Denver — including Columbine High — earlier this month. It’s no coincidence the Florida woman chose the lead-up to the Columbine massacre’s 20th anniversary as the time to make her threats.

Authorities described the suspect as “armed and extremely dangerous” when initial reports were released. Pais was allegedly “infatuated” with the Columbine shooting. She traveled from Miami to Colorado mere days before the anniversary, purchasing a shotgun and ammo upon arrival.

As expected, she had made comments on social media and to her friends and family that indicated a positive view of the original massacre. Her Surfside, Florida-based parents reported their daughter missing after she left and informed authorities about her troubling statements. 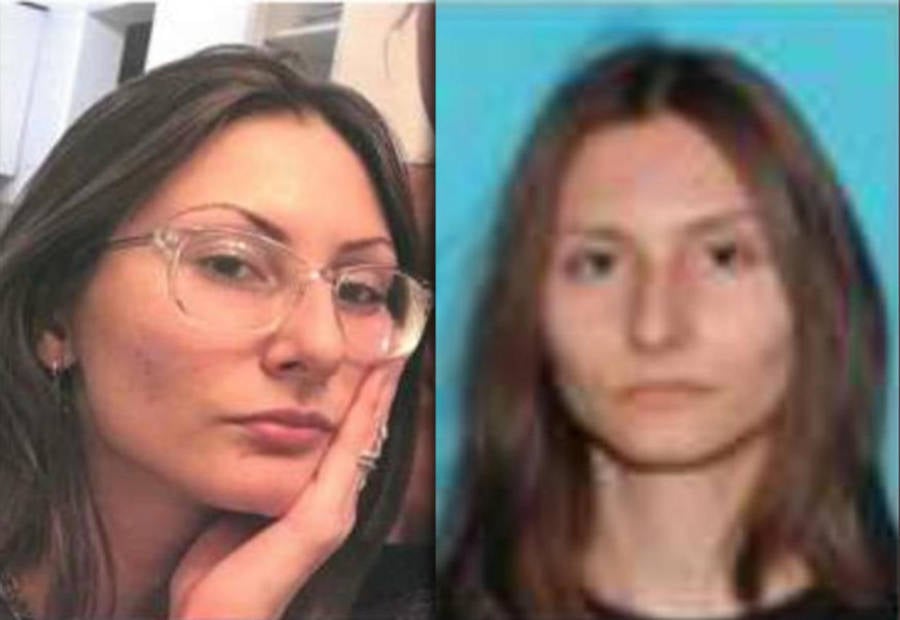 The FBI field office in Miami subsequently contracted authorities in Colorado about possible threats. The fact that she had purchased three one-way tickets on consecutive days also gave officials pause. It was after a Colorado gun store confirmed that Sol Pais had purchased the shotgun before she left Florida that the FBI categorized her as a threat.

According to a Facebook post by Josh Rayburn of Colorado Gun Broker, Pais passed the background check and the staff “had no reason to suspect she was a threat to either herself or anyone else.”

"Everything that I have heard in briefings does not that indicate she had any assistance… just a fascination with the Columbine area, and the horrendous crime that went on there 20 years again," Colorado sheriff Jeff Shrader says about Sol Pais pic.twitter.com/2Da7HfpxSW

Sheriff Jeff Shrader said Pais had a “fascination with the Columbine area and the horrendous crime that went on there 20 years ago.”

But that fascination never had a chance to be put into action. Sol Pais was found dead of a reportedly self-inflicted gunshot wound on April 17 at the Echo Park Lodge near Mount Evans 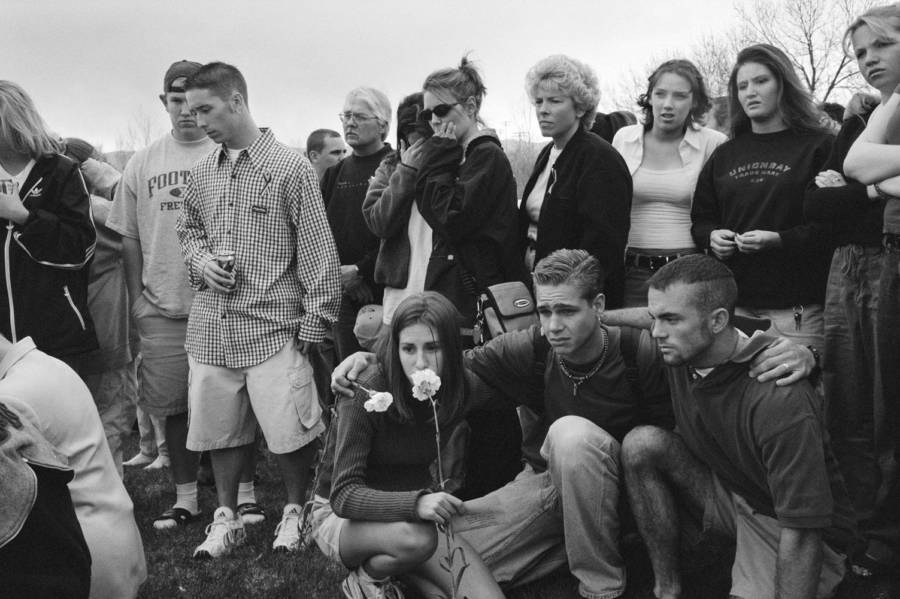 Zed Nelson/Getty ImagesThe day after the massacre, Columbine High School students gather outside their school to pray and place flowers on the ground.

It may be hard to believe that 20 years have passed since Harris and Klebold massacred their peers. But perhaps what’s more difficult to believe is that a large portion of adolescents today are so drawn to them and their killing spree.

By attaching themselves, their anxieties, and anger to these two figures — two murderous criminals who have now, for some, become icons — these teenagers experience a sense of community they likely can’t find anywhere else.

After learning about Columbiners and Sol Pais, read about the Bath School disaster, the biggest school massacre America forgot. Then, learn the story of Brenda Ann Spencer, the woman who shot up a school because she didn’t like Mondays.