The Story Of Daniel Lambert, The ‘Fattest Man In England’ Who Left 19th-Century Crowds In Awe

Although Daniel Lambert always insisted that he didn't overeat, his weight ballooned to 739 pounds by the time he was in his 30s, giving him a waist that measured more than nine feet around. 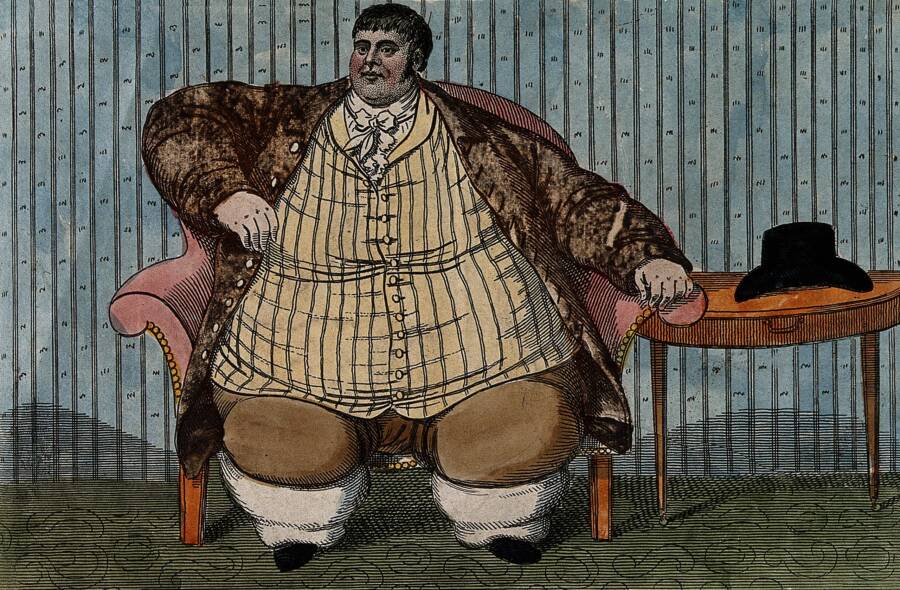 In 1806, a strange advertisement appeared in a London newspaper. It described the “greatest Curiosity in the World,” a Mr. Daniel Lambert, who weighed 50 stone (700 pounds). People could come and see Lambert and his girth — for a price.

Indeed, Lambert, who was known as the “fattest man in England” in his day, turned his immense weight into a money-making operation. And though people came to gawk, they stayed because of Lambert’s intelligence and engaging conversational skills.

In a time when obesity was regarded as a curiosity, Lambert became something of a legend. Today, his legacy carries considerable weight in his hometown of Leicester, England. 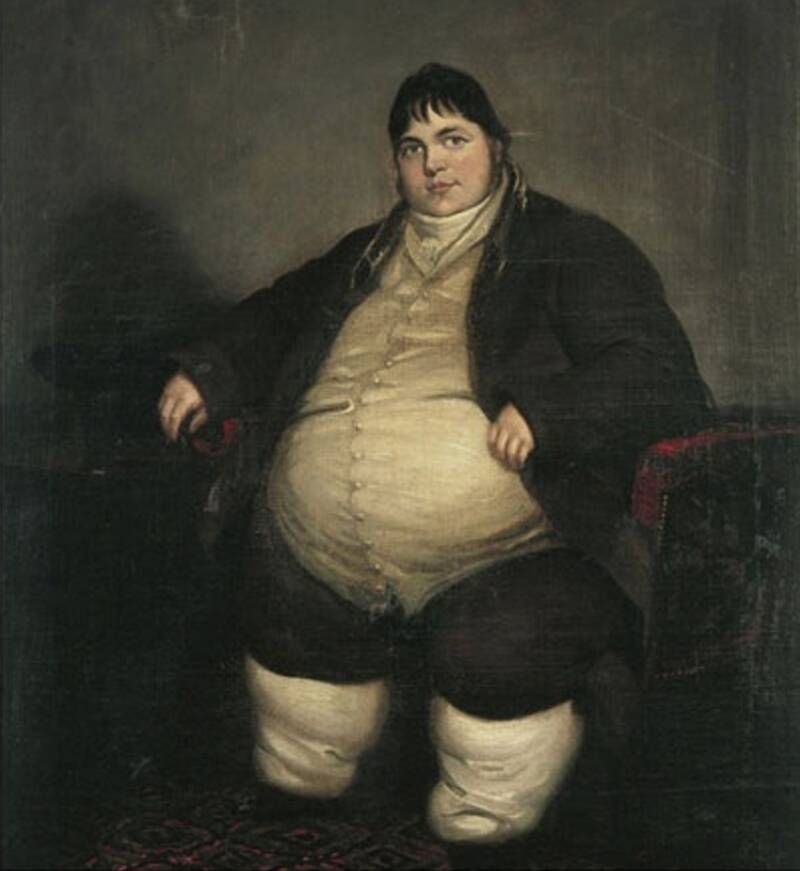 Public DomainDaniel Lambert circa 1800. By then, he was around 560 pounds.

Daniel Lambert became famous for his weight. But he wasn’t always obese. Born on March 13, 1770, in Leicester, England, Lambert is documented in the book The Two-Headed Boy and Other Medical Marvels as a strong, healthy boy who enjoyed otter hunting, horse racing, hunting, fishing, and dog breeding.

Indeed, before he became known for his size, Lambert distinguished himself for his bravery and strength. As a teenager, he was watching a performance of dancing bears when one of his dogs suddenly lunged at the beasts. A bear attacked — and Lambert fought it off with a pole.

But though Lambert had always tried to stay active, he eventually settled into a sedentary job. When his father, the local jailkeeper, retired in the early 1790s, Lambert took over his post. And as he spent more and more time sitting at the jail door, he started to put on weight.

By 1793, Lambert weighed a whopping 448 pounds. He was still strong — as reported by The National, Lambert could allegedly lift up to 560 pounds of timber and carry two men on his back while he swam — but his inactivity began to take its toll. Plus, Lambert’s weight had started to draw attention.

One visitor to Leicester in 1803 sniped that “had this fat man studied a thousand years, he would not have thought on a profession better calculated to suit his constitutional propensity to ease.”

Another man who’d heard of Lambert’s weight invented an excuse to visit his house. He told a servant who answered the door that he wanted advice on fighting cocks. Lambert quipped: “Tell the gentleman that I am a shy cock.”

By the early 1800s, Lambert’s weight had ballooned to 560 pounds. And he had a problem — his jail was closing. With money running out and few job opportunities, Daniel Lambert decided that he’d put himself on display.

The “Fattest Man In England” Goes To London 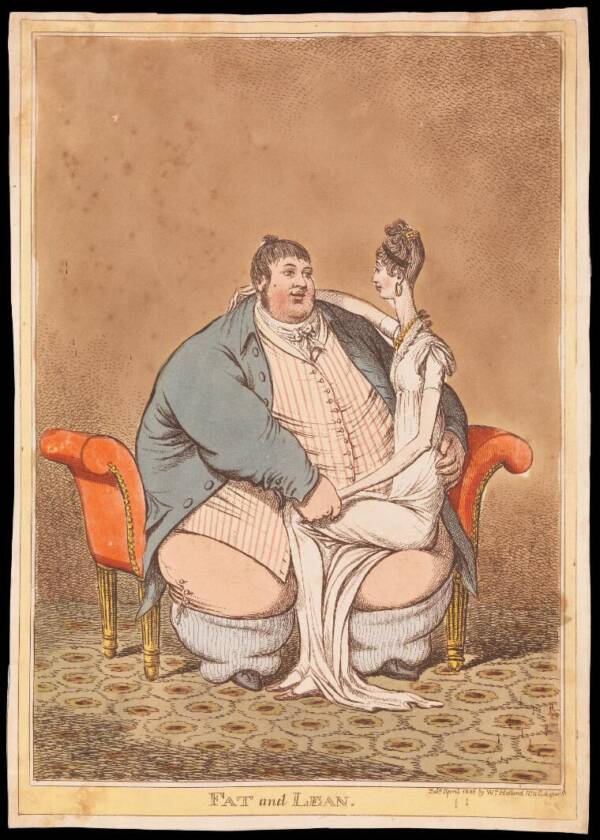 Public DomainA depiction of Daniel Lambert in 1806 with a thin woman on his knee.

In the spring of 1806, Daniel Lambert went to London. This was easier said than done — by then, Lambert weighed 700 pounds and was the heaviest man in recorded human history. According to English Eccentrics and Eccentricities, he had to have a special carriage built that was big enough to carry him to the capital.

Once there, Lambert put his plan into action. He ran an advertisement in The Times which read:

“EXHIBITION. — MR DANIEL LAMBERT, of Leicester, the greatest Curiosity in the World, who, at the age of 36, weighs upwards of FIFTY STONE (14lb to the stone). Mr Lambert will see Company at his House, No. 53, Piccadilly, opposite St. James’s Church, from 12 to 5 o’clock. — Admittance 1s.”

Hundreds of people flocked to see him. Londoners were fascinated by Lambert, who claimed that he never drank alcohol and ate only a modest amount. They also found him to be a sparkling conversationalist who could speak at great length on topics like dog breeds and hunting. 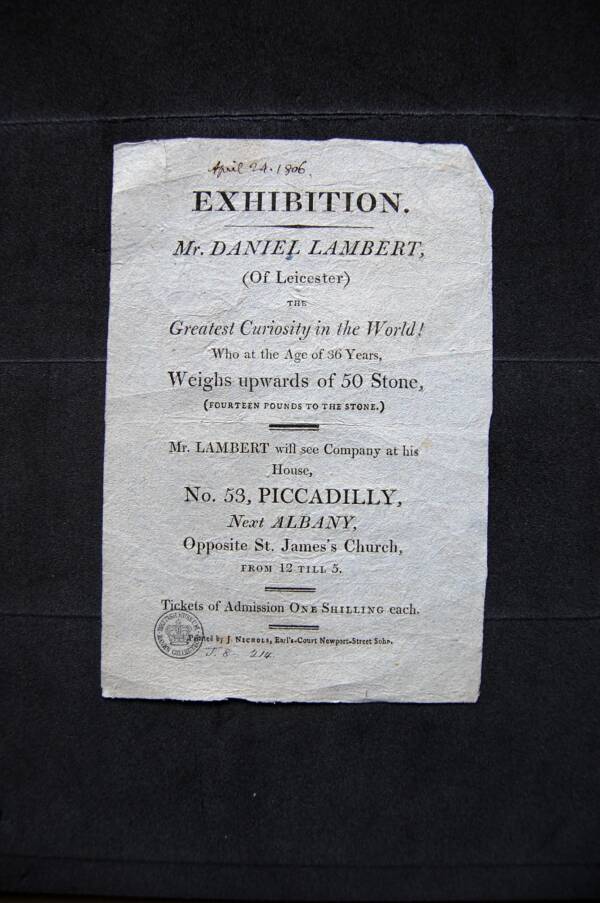 The British MuseumA copy of one of the advertisements run by Daniel Lambert in 1806.

“The concourse of fashionable visitors to the house of Mr. Lambert… has been very great, during the last two days,” noted a reporter from The Times after visiting Lambert.

“To find a man of his uncommon dimensions… possessing great information, manners the most affable and pleasing, and a perfect ease and facility in conversation, exceeded our expectations, as high as they had been raised.”

The reporter also noted that female visitors greatly outnumbered men and that the women could be heard praising Lambert’s “manly and intelligent countenance.”

Before long, Lambert’s girth became the talk of the town. All of London went atwitter when he was visited by “Count” Józef Boruwłaski, the famous Polish dwarf. And Lambert was even granted an audience with King George III.

But not all of his encounters were positive ones. In The Book of Wonderful Characters (1869) by Henry Wilson and James Caulfield, Wilson writes that Lambert had rude visitors as well.

“A person asking [Lambert] in a very rude way the cost of one of his coats, he returned him no answer,” Wilson wrote. “The man repeated the question with the observation that he thought he had a right to demand any information, having contributed his shilling, which would help to pay for Mr. Lambert’s coat as well as the rest.”

“‘Sir,’ rejoined Lambert, ‘if I knew what part of my next coat your shilling would pay for, I can assure you I would cut out the piece.'”

By the time Lambert returned to Leicester a few months later, he was a wealthy man — and something of a local hero. On Sept. 19, 1806, the Leicester Journal glowingly noted Lambert’s presence at a race, writing, “among the distinguished characters upon the turf we were glad to see our old friend, Mr. Daniel Lambert, in apparent high health and good spirits.”

Later that year, Lambert took himself out on tour, where he drew audiences in both London and in smaller towns and cities. According to Wilson, “many thousands beheld with admiration his astonishing bulk.”

The Oversized Legacy Of Daniel Lambert 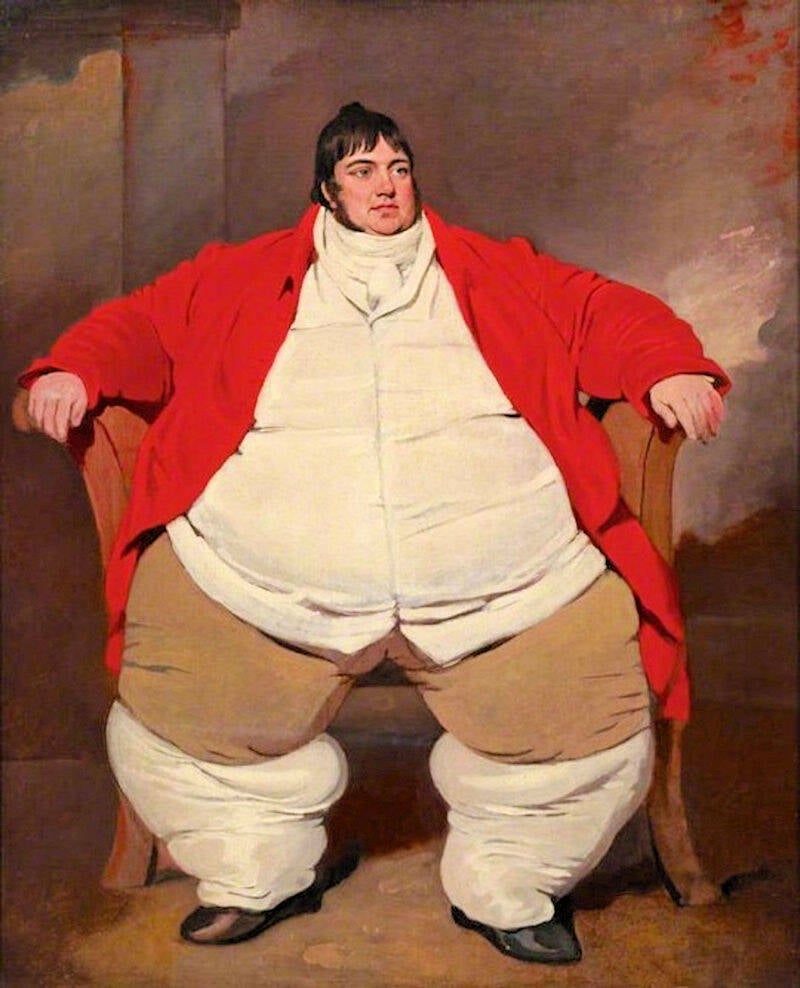 Public DomainDaniel Lambert died at the age of 39, having reached a weight of 739 pounds.

Daniel Lambert went to Stamford in June 1809 as part of his tour — and because he wanted to see the Stamford Races. But it was the last stop he’d ever make.

After checking into the Waggon and Horses Inn on June 20, Lambert went to bed as normal and rose the next day. As he was shaving, however, he started experiencing breathlessness. And in a matter of minutes, Lambert died. He was just 39 years old.

His death caused a number of logistical problems. Lambert was large — 739 pounds — and locals had to figure out both how to remove him from the inn and bury him. According to the Stamford Civic Society, they eventually tore out a window and part of a wall to extract his corpse and laid him in a “box-like” coffin that was the size of a parking spot.

Then, it took 20 men to slowly roll Lambert’s casket from the town and into the churchyard. The townspeople buried Lambert beneath a stone paid for by his friends, which read:

“In Remembrance of that Prodigy in Nature.
DANIEL LAMBERT.
a Native of Leicester:
who was possessed of an exalted and convivial Mind
and in personal Greatness had no Competitor
He measured three Feet one Inch round the Leg
nine Feet four Inches round the Body
and weighed
Fifty two Stone eleven Pounds!
He departed this Life on the 21st of June 1809
Aged 39 years
As a Testimony of Respect this Stone is erected by his Friends in Leicester.”

In the aftermath, Daniel Lambert became something of a legend. Pubs popped up with his name, a huge wax statue was created in his image, and “Daniel Lambert” became a catch-all phrase for immensity.

Today, he’s no longer considered the world’s fattest man — that title belongs to Jon Brower Minnoch, who tipped the scales at 1,400 pounds — but Lambert does leave behind an impressive legacy.

A big man in a world of little obesity, Daniel Lambert could have locked himself away or submitted himself to a sideshow. He didn’t. Instead, he took control of his destiny and used his weight to make his fortune.

After reading about Daniel Lambert, learn about Tarrare, the medical marvel who could eat anything. Or, read about Princess Caraboo, the 19th-century scam artist who convinced an English town that she was royalty.