The Harrowing Journey Of Dave Kunst, The First Man To Walk Around The World

Setting out on June 20, 1970, Dave Kunst walked 14,450 miles around the Earth — but not without experiencing hardships along the way. 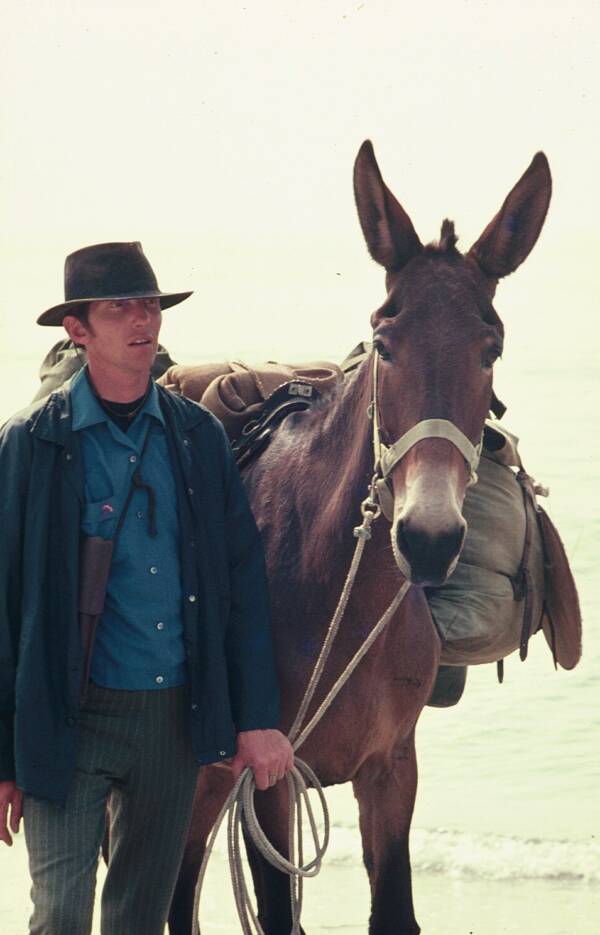 After watching astronauts land on the moon in 1969, Dave Kunst felt desperate for adventure. He kicked around a couple of ideas and landed on an ambitious one: circumnavigating the globe by foot. On June 20, 1970, less than a year after the Apollo mission, he put his plan into action.

Setting out from Minnesota, Dave walked and walked. Accompanied by a mule named Willie Makeit and his younger brother, John, he journeyed east, trekking to New York City before making his way across Europe and Asia.

Though Dave’s journey was filled with joyful moments like meeting Princess Grace of Monaco, Norwegian adventurer Thor Heyerdahl, and his future wife, he also encountered danger and tragedy during his four-year trek.

This is the story of Dave Kunst, the man who walked around the world.

Dave Kunst’s Decision To Embark On A Global Journey 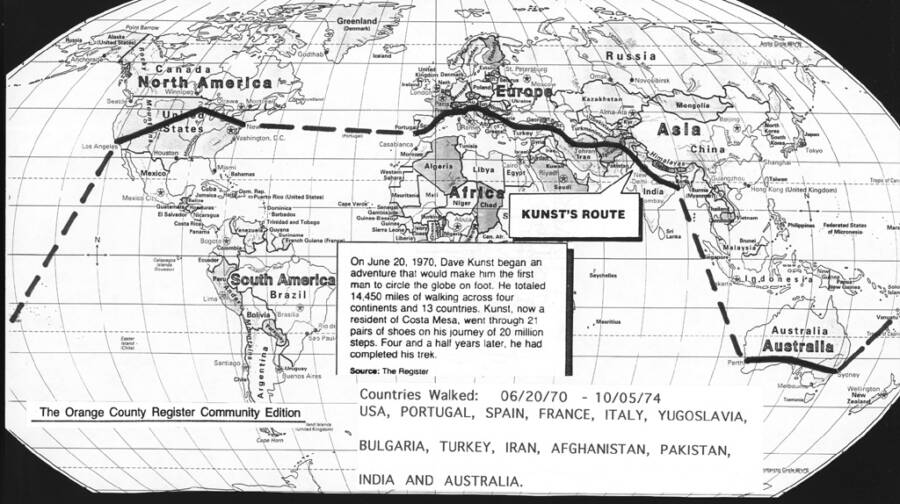 Born on July 16, 1939, Dave Kunst spent most of his early life in Minnesota. But on July 20, 1969, he found himself in awe as he watched the Apollo astronauts land on the moon — and decided to seek out an adventure of his own.

Tired of life in Waseca, of his two jobs as a county surveyor and a projectionist, and even of his wife and three children, Dave started kicking around different ideas. According to the Star Tribune, he weighed traveling to the tip of South America or driving across the Australian outback.

But Dave’s boss at the local movie theater suggested that he do something that no one else had done. Why not try walking across the world? Kunst, then 30 years old, liked the idea. He invited his 22-year-old brother John to join him and started to plan out their circumnavigation of the globe on foot.

“John and I had never been anywhere,” Kunst told the Star Tribune. “We were very naive on this. We spread a world map on the living room floor and tried to do a circle as much as possible.”

On June 20, 1970, the brothers set off on their journey with a mule named Willie Makeit. The Los Angeles Times reports that thousands of well-wishers gathered in Waseca to watch them depart, and the high school band played “King of the Road” as they took the first steps on their journey.

“I’m doing this for myself mainly,” Dave Kunst later said, according to the Star Tribune. “I was tired of Waseca, tired of my job, tired of a lot of little people who don’t want to think, and tired of my wife. The walk was a perfect way to change all that: I just walked out of town.”

But he never could have predicted where his journey would take him.

How The Kunst Brothers Found Adventure — And Tragedy 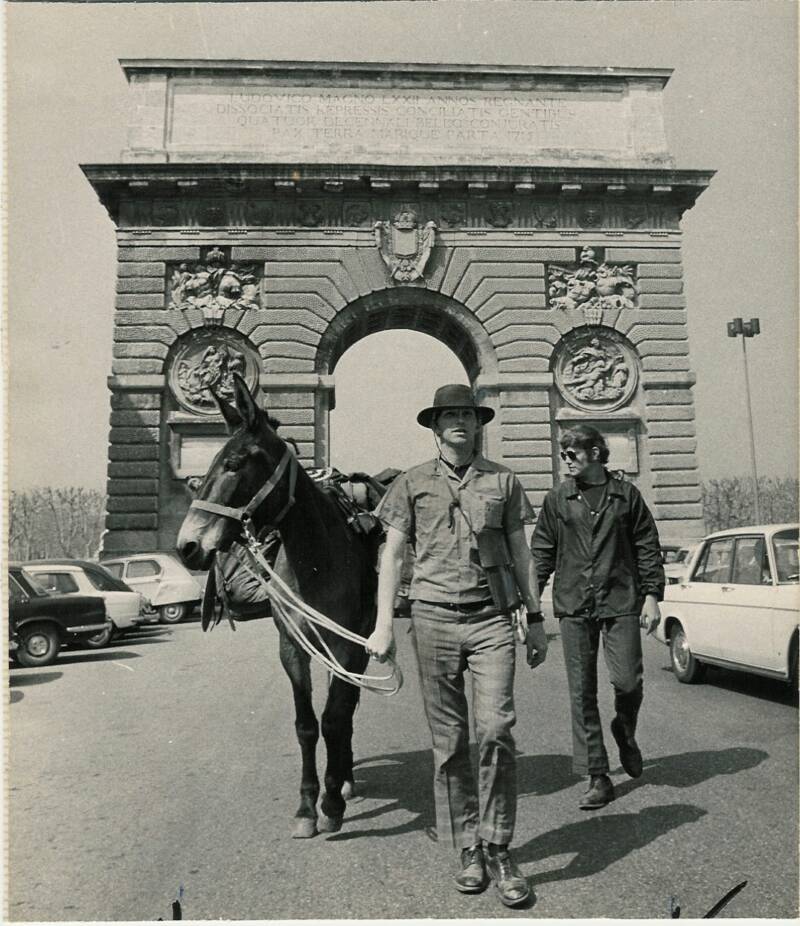 Dave Kunst/FacebookDave Kunst with his brother, John, and their mule in France.

It didn’t take long for the brothers to encounter adventure. Heading east, Dave and John walked first to New York City, then flew across the Atlantic Ocean to Lisbon, Portugal. Along the way, according to Dave Kunst’s official website, they collected signatures and stamps from mayors and city officials in towns where they spent the night.

In Monaco, they had an audience with Princess Grace. In Italy, they crossed paths with Norwegian adventurer Thor Heyerdahl. And in Venice, the brothers caused significant excitement as they walked through town, as mules and horses were forbidden on the city’s bridges and narrow streets.

After walking through Europe, they picked up a dog in Turkey, haggled with a camel driver in Iran who wanted to trade his camel for their mule, and struggled through 128-degree heat in Afghanistan’s Desert of Death.

But on Oct. 21, 1972, tragedy struck. A reporter had erroneously written that the brothers were traveling with money. Though they had encouraged people they met along the way to donate to the Children’s Fund, the reporter wrote that they were actually carrying donations for UNICEF. A group of bandits saw the news and decided to rob them.

As the Orange County Register reported, six bandits attacked Dave and John 90 miles south of Kabul, Afghanistan. They shot and killed John and left Dave Kunst to die with a bullet wound in his chest. Against all odds, Dave survived for eight hours in the desert until someone happened to drive by and save him.

Dave flew home to Minnesota for several months to recuperate, but he was determined to keep walking. If he didn’t finish his journey, he thought, according to the Orange County Register, then John “would have died for nothing.” So after he was fully healed, he carried on once more. 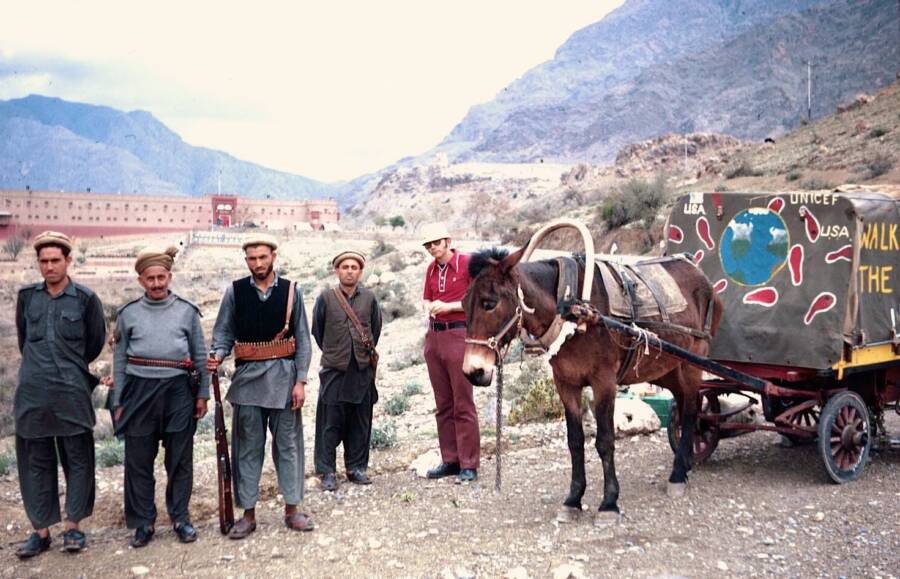 Dave Kunst/FacebookPete Kunst with tribesmen in Pakistan. He accompanied Dave on his worldwide journey after their brother John’s death.

On March 1, 1973, Dave Kunst returned to Afghanistan — to the exact spot where John had been killed. But he didn’t resume his journey alone. This time, he was with his other brother, Pete. “I wanted to make sure the walk got finished for John,” Pete, a former Marine, told the Orange County Register.

The brothers walked through the Khyber Pass in Pakistan — they were allegedly the first non-Asians to make the journey since Alexander the Great — and crossed into India. Though they had originally planned to include China and the Soviet Union in their journey, both countries denied them entry, so they continued on to Australia.

But halfway through the Australian leg of Dave Kunst’s trek, everything seemed to go wrong. After Pete had to return to the United States for work, Dave’s mule died of a heart attack. The journey was in jeopardy — until an Australian woman named Jenni Samuel volunteered to drive 1,000 miles alongside Dave, towing his wagon as he walked.

“Jenni took the place of the mule,” Dave told the Orange County Register. 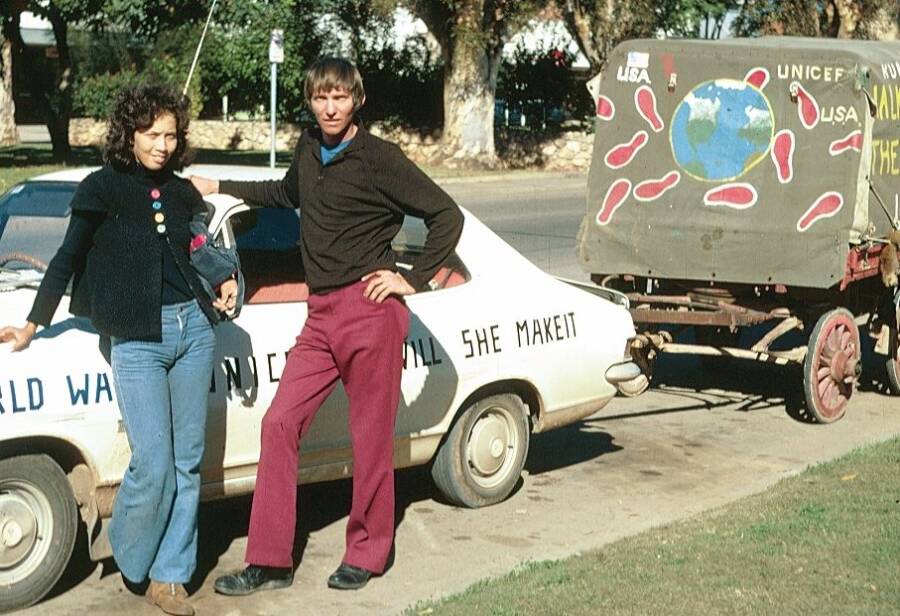 Dave Kunst/FacebookJenni Samuel stepped in after Dave Kunst’s mule had a heart attack and died.

From Australia, Dave crossed the Pacific Ocean back to the United States. Then, from Newport Beach, California, he walked home to Waseca, Minnesota. His journey had lasted four years, three months, and 16 days. According to his website, Dave had crossed four continents and thirteen countries, walked 14,450 miles, and worn out 21 pairs of shoes.

At home, however, Dave Kunst found that some of the issues he’d walked away from hadn’t disappeared. He had completed his grand adventure and set a Guinness World Record as the first man verified to circumnavigate the globe on foot, but something was missing. Shortly after he returned, Kunst divorced his wife and flew back to Australia to be with Jenni Samuel.

They returned to the United States together a year later, got married, and moved to California, where they’ve lived a quiet existence ever since.

So where is the man the press called the “Earthwalker” today?

The Lasting Legacy Of The ‘Earthwalker’ 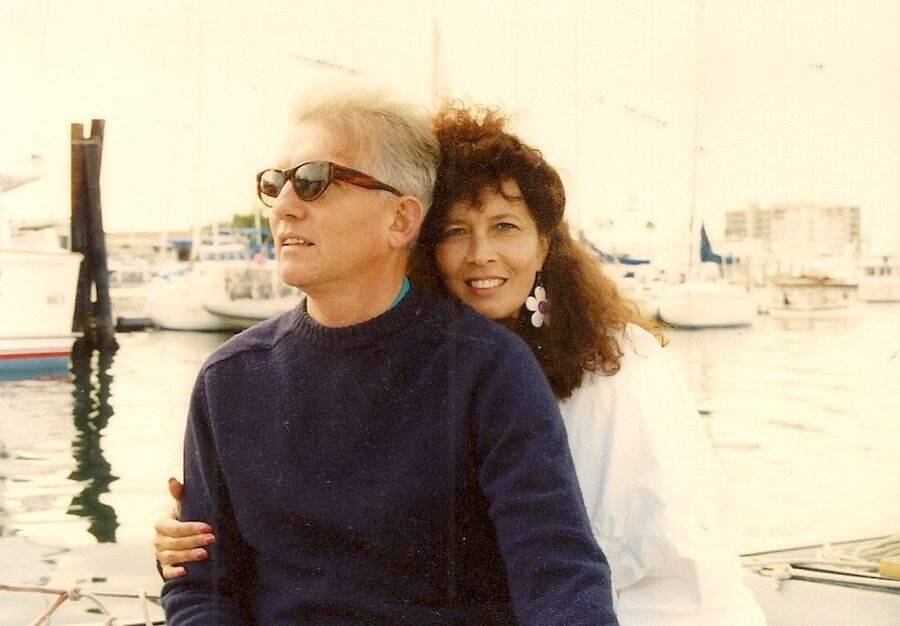 Dave Kunst/FacebookDave and Jenni in 2015.

Today, Dave Kunst says that his adventuring days are behind him.

But his adventures didn’t entirely end after he finished his journey. After circumnavigating the globe on foot, Kunst recorded his journey in the 1979 book The Man Who Walked Around the World. His trek was also included in the 1991 Guinness Book of Records, the 1989-90 Guinness Sports Record Book, and Ripley’s Believe It or Not!.

To date, Dave Kunst maintains the record — though HISTORY points out that George Schilling made a similar, unverified journey, and Arthur Blessitt holds the record for the greatest distance ever walked. But to Dave, the journey was always the most important part. And he doesn’t regret a thing.

“I never think that way, and John wouldn’t either,” he told the Los Angeles Times. “The way we looked at life was that if you’re going to die — I mean, he would rather have died doing that than in an accident out on the freeway someplace. He told me more than once — and I said the same thing to him: We loved walking around the world; it was a great adventure, and if we died walking around the world, tell mom and dad we died happy.”

After reading about Dave Kunst’s walk around the world, discover the stories of other world record holders, like Rolf Buchholz, who has the most body modifications in the world, or Duane Hansen, who set a record by traveling 38 miles by pumpkin.