The six-foot, 6,000-pound Diprotodon was the largest marsupial to have ever existed. 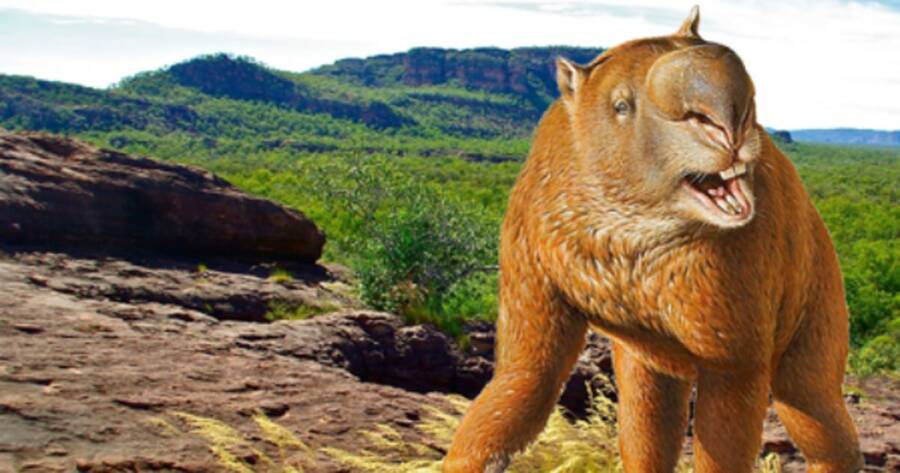 Peter Trusler/Ancient OriginsAustralia’s ancient giant wombat, the Diprotodon, is considered the largest marsupial to ever have lived.

Throughout most of the Pleistocene epoch, a gargantuan marsupial roamed the grasslands of Australia. We know of one of its descendants well — namely the lazy koala and the adorable wombat. But this marsupial was anything but small and sedentary.

The Dimensions Of The Diprotodon

The Diprotodon is more than 200 times larger than its closest living cousins the wombat and the koala, making it the largest species of Australian megafauna.

Often referred to as the Ice Age between 1.6 million to 46,000 years ago, the Pleistocene epoch in which the Diprotodon roamed was rife with super-sized versions of mammals and marsupials we may recognize today, like Megatherium the giant sloth, the mammoth, or the elephant bird.

“These monster marsupials were not the only giants,” a report by the BBC explained. “Their numbers were swelled by 5m-long lizards, half-tonne birds, and giant, dinosaur-like tortoises. The result was a truly nightmarish biological assemblage.” 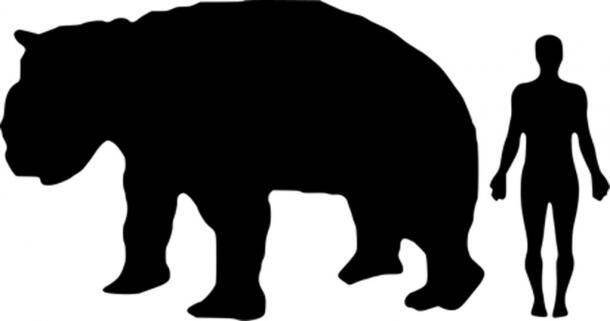 Wikimedia CommonsThough gargantuan, the giant wombat was likely a gentle one.

But the ancient marsupial Diprotodon towered over them all. Resembling a hornless rhinoceros or a giant rodent, Diprotodon clocked in as a hippo-sized, 4,000-6,000 pound, 6-foot-tall gentle giant.

According to the Australian Museum, this four-legged beast potentially had a short trunk, a tail, and thick, stump-like limbs. Strangely enough, the mega-marsupial also had dainty, pigeon-toed feet a bit small for its otherwise weighty stature.

Its Food, Habits, And Habitats

Those incisors weren’t meant for meat or hunting, however. The Diprotodon feasted on some 220 to 330 pounds of shrubbery and greenery a day — that’s about 200 times the amount of food the average human eats per meal.

The gentle scavenger is believed to have likely roamed in small family groups with other Diprotodons, straying near bodies of water or grasslands where vegetation was plentiful.

They roamed semi-arid plains, savannahs and open woodlands, however, as opposed to the more hilly coastal areas. Diprotodon lived all over the continent of Australia and because they were herbivores, they could feed and survive off of almost any kind of plant. 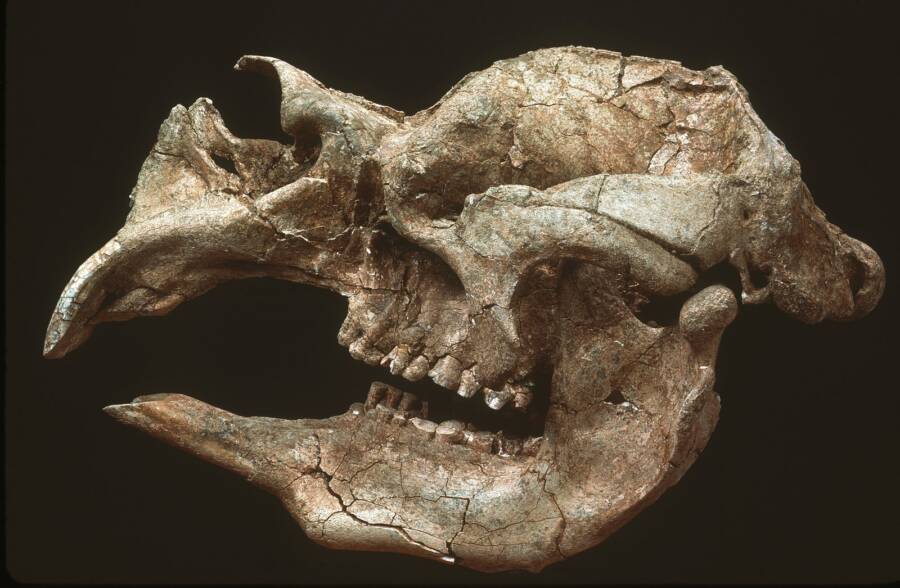 James Horan/Australian MuseumThe Diprotodon had a lot of air space in their skulls and nasal cavities which, to some researchers, suggests they may have had small trunks.

It is thought that in fact those large incisors were used to root out or dig up plants, too.

The Diprotodon likely didn’t have too many predators, save for its young in danger of being whisked off by a marsupial lion or terrestrial crocodile. But these were the terms of the territory in the Pleistocene epoch: large animals with large stakes.

As such, Diprotodon males probably made the most of their time and mated with multiple partners. Fossil evidence has shown that males were likely larger than females and presented enough physical differences as to suggest that they did indeed service multiple females throughout the breeding season.

The first recorded discovery of this giant wombat was by Major Thomas Mitchell in the 1830s in a cave near Wellington in New South Wales, Australia. From there, the fossils and discovery were sent to Sir Richard Owen, who named the creature “Diprotodon,” for its “two forward teeth.”

The oldest fossils of the Diprotodon were discovered at Lake Kanunka in South Australia and Fisherman’s Cliff in New South Wales. The most complete diprotodon skeleton was found at Tambar Springs, New South Wales, and was excavated by the Australian Museum, where it’s now on display.

It’s also believed that these elephantine creatures co-existed with the indigenous people of Australia for thousands of years before going extinct as aboriginal rock art appears to depict them. 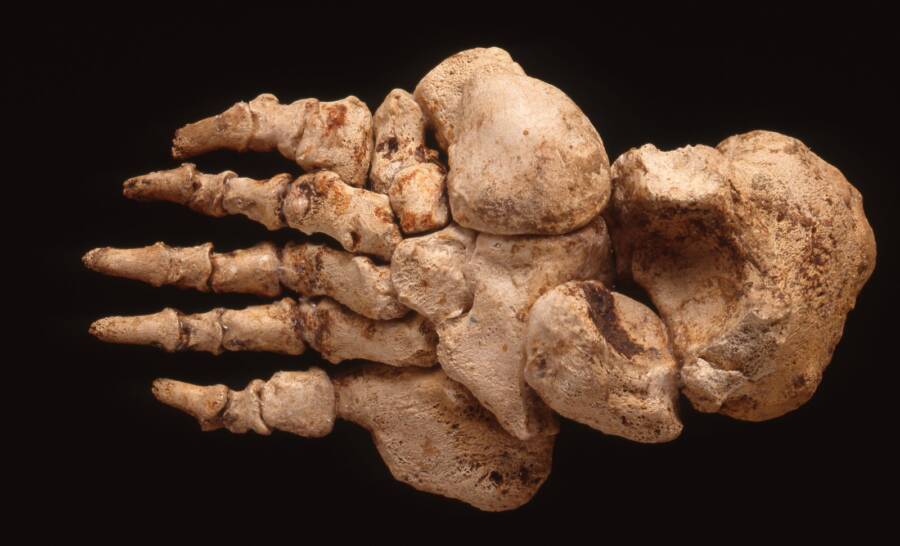 But whether this co-existence with humans proved deadly for the Diprotodon some 46,000 years ago — or whether it was something else — is still up for debate.

The Demise Of The Diprotodon

About 14 out of 16 large Australian mammals went extinct during the Pleistocene period, Diprotodon being one of them. Of the fossils that have been discovered, many signal to the notion that these creatures died from drought and loss of hydration.

For instance, many skeletons of the Diprotodon have been excavated from Lake Callabonna, a dry salt lake in southern Australia. Because of this, it is believed that Diprotodon families wandered to the lake during the dry season only to fall in and become trapped.

In 2012, researchers also uncovered the remains of about 50 Diprotodon at BHP Billiton Mitsui Coal’s South Walker Creek mine site in Queensland, Australia, furthering the idea that the animals became trapped in the mud of the lake and died there. It’s here where the researchers found and nicknamed “Kenny,” a perfect example of the Diprotodon, whose jawbone is over 2 feet long. 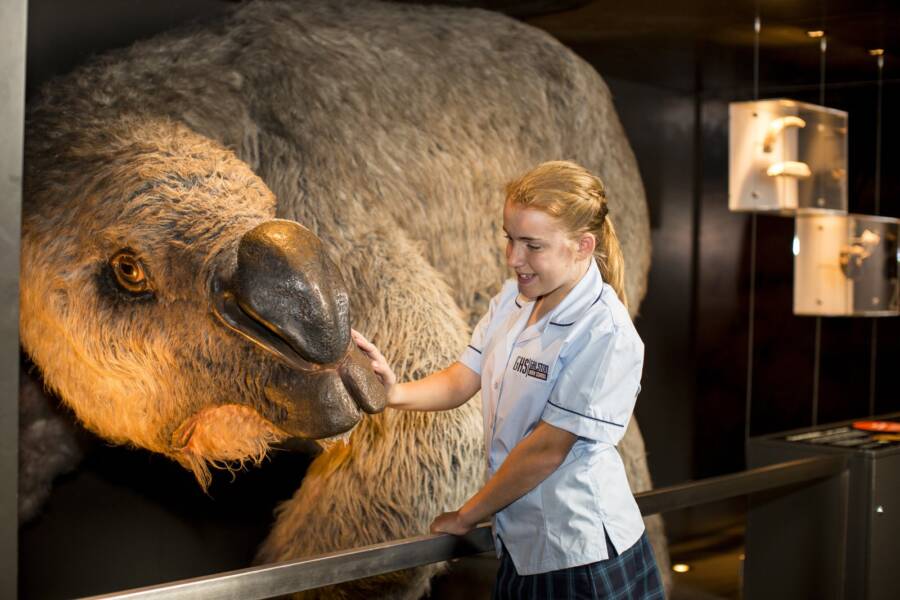 Other theories include climate change, hunting, and the arrival and land management of the aboriginals of Australia. Climate change advocates suggest that the animals were exposed to a period of extremely cold and dry weather. Advocates of the human hunting theory posit that humans hunted the gentle giants into extinction.

Still, others believe that land management in the form of fire-farming destroyed their habitat, their access to food, and shelter. Ash deposits around Australia suggest that the aboriginals there were “fire-stick farmers.” This means they used fire to drive game out of the bushes, but this then destroyed the vegetation integral to the Diprotodon’s diet.

Perhaps there is some truth in all theories of the Diprotodon’s extinction. Researchers are unsure as to which is the definite cause or if it is a combination of them all.

After this look at the ancient giant wombat, the Diprotodon, check out some more ancient critters, like Glyptodon the car-sized armadillo or Titanoboa, the nightmarish snake you never want to meet.