These habitable-zone planets could very well have oceans of liquid water on their surfaces and support life. 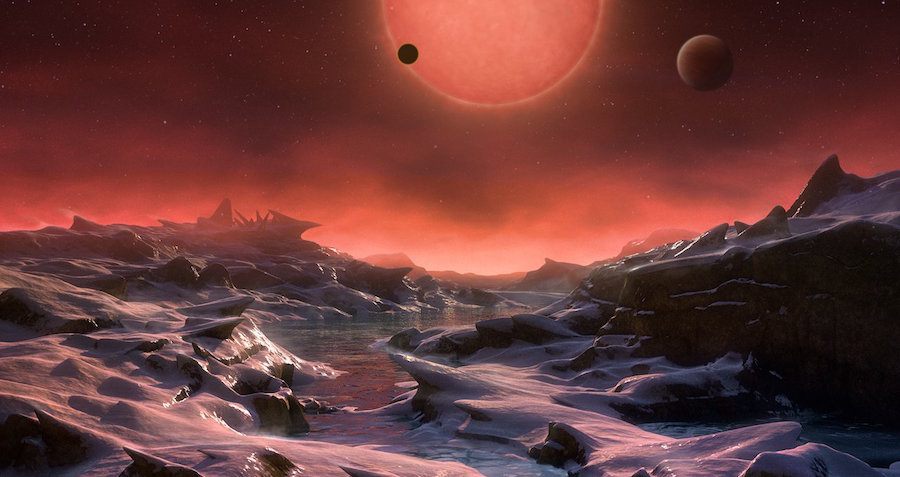 ESO/M. KornmesserThis artist’s impression shows an imagined view from the surface one of the three planets orbiting the ultracool dwarf star. These worlds are the best targets found so far for the search for life outside the Solar System. In this view, one of the inner planets is seen in transit across the disc of its tiny and dim parent star.

NASA just announced the discovery of seven Earth-like planets within a star’s habitable zone about 40 light years away.

The planets in question could very well contain oceans of water on their surfaces and have other Earth-like conditions, according to an ESA news release.

In fact, this star’s system contains more Earth-sized planets than any other system ever found, as well as the highest number of planets that may have liquid surface water.

These details come courtesy of a new study authored by Michaël Gillon of the STAR Institute at the University of Liège in Belgium and published in the journal Nature.

“This is an amazing planetary system — not only because we have found so many planets,” Gillon said, “but because they are all surprisingly similar in size to the Earth!”

Known as TRAPPIST-1, the star is an ultracool dwarf star that is several times smaller than the Sun. TRAPPIST-1 has only eight percent of the mass of the Sun and is roughly the same size as Jupiter.

“The energy output from dwarf stars like TRAPPIST-1 is much weaker than that of our Sun,” co-author Amaury Triaud said in the news release. “Planets would need to be in far closer orbits than we see in the solar system if there is to be surface water. Fortunately, it seems that this kind of compact configuration is just what we see around TRAPPIST-1!”

However, the system is still very far away — it would take roughly 700,000 years to get there with current technology.

For the moment, exploring these worlds will be limited to space telescopes such as the NASA/ESA Hubble Space Telescope.

“With the upcoming generation of telescopes, such as ESO’s European Extremely Large Telescope and the NASA/ESA/CSA James Webb Space Telescope,” Hubble team member Emmanuël Jehin said in the news release, “we will soon be able to search for water and perhaps even evidence of life on these worlds.”

Next, check out the mysterious life forms that NASA scientists discovered hibernating inside giant Mexican cave crystals, before finding out about the dwarf planet Ceres’ possible vanishing ice volcanoes.