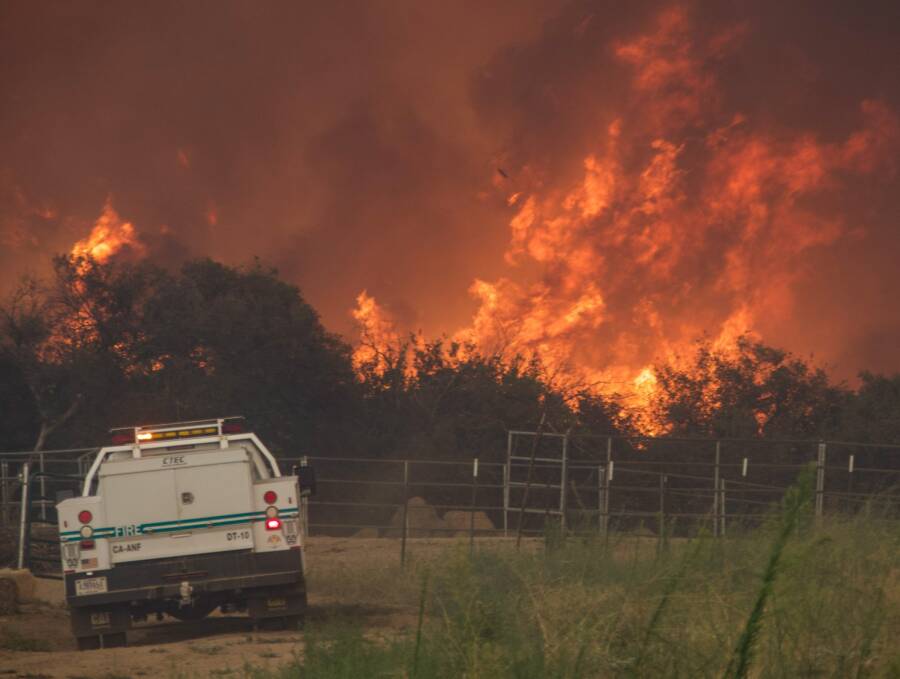 TwitterThe El Dorado wildfire was caused by a “pyrotechnic device” and began at 10:23 a.m. on Saturday.

While millions of Americans get back to work after Labor Day weekend, thousands of firefighters continue to battle over 75 large wildfires across the country. While many of these fires are burning thanks to hot and dry weather, the El Dorado fire in California was started by a gender reveal party.

According to CNN, the California Department of Forestry and Fire Protection (CAL FIRE) determined as much after reviewing surveillance footage of the Saturday morning event. It all began after two adults and their children used a “smoke-generating pyrotechnic device” that got out of hand.

Used in El Dorado Ranch Park in Yucaipa, at least three laws were violated by the yet unidentified officials. While it remains unclear whether or not the district attorney will pursue the case, fire officials are currently more focused on managing the resultant fire which has grown to over 10,000 acres.

Remarkably, the El Dorado fire has only been seven percent contained as of late Monday night — in a blaze which officials have called “one of the most dangerous fires” they’ve ever seen.

A KTLA 5 news segment on the cause of the El Dorado fire.

Yucaipa is about 10 miles east of San Bernardino and 70 miles east of Los Angeles. According to IFL Science, there are at least 23 other active wildfires currently ravaging the state of California. The El Dorado fire began as early as 10:23 a.m., and currently appears to have been the most preventable.

“CAL FIRE reminds the public that with the dry conditions and critical fire weather, it doesn’t take much to start a wildfire,” the department’s press release stated. “Those responsible for starting fires due to negligence or illegal activity can be held financially and criminally responsible.”

To make matters worse, California is being plagued by an unusually high heatwave. Thermostats in Los Angeles have spiked to record temperatures of 121 degrees Fahrenheit this weekend. And in August, Death Valley reached an incredible 130 degrees Fahrenheit.

California has certainly been hit the hardest out of all affected states, with evacuations being ordered in the regions plagued by the El Dorado and other fires. CAL FIRE spokeswoman Cathey Mattingly said no injuries have been reported as a result of this particular wildfire. It’s been overwhelming, nonetheless.

“In my 30 years as a citizen in Yucaipa, I have never seen such a large fire,” said Yucaipa Mayor David Avila. “As a retired firefighter with 32 years of experience, I can assure you I witnessed one of the most dangerous fires that we can have in this area.” 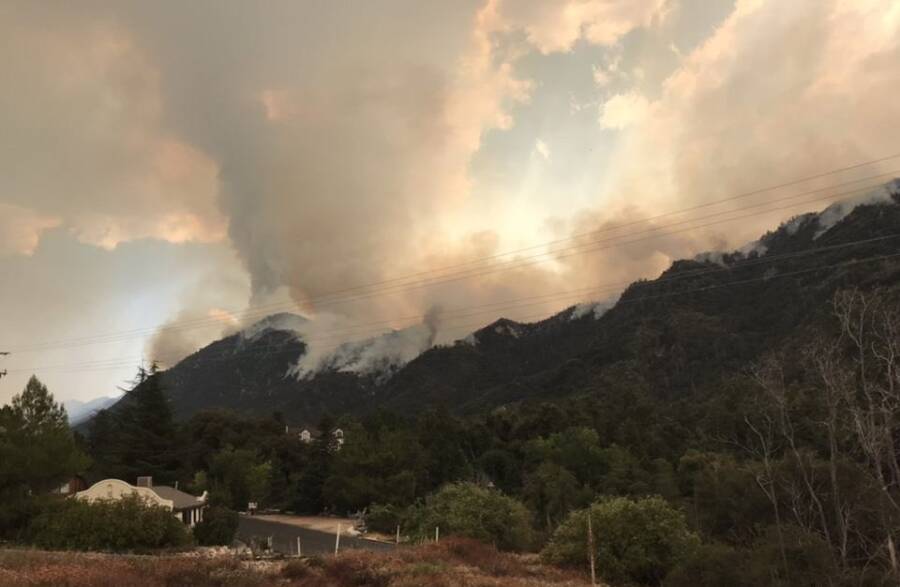 The recovered surveillance footage of the gender reveal party-gone-wrong showed a couple with numerous children walking into the park as another person lit a device. It then ignites, after which the family is seen frantically grabbing water bottles to try and douse the fire — to no avail.

Those involved have cooperated fully with investigators, who have refused to publicly release the footage. Some of the broken laws included “igniting the land” and arson, with an assessment of how reckless these people were yet to determine if they will be charged with felonies or misdemeanors.

“It really is a tragedy, it’s sad,” said CAL FIRE investigator Captain Bennet Milloy. “They were hoping to remember the day in a different way. You need to be extra cautious because you could be liable.”

Captain Milloy explained that if the district attorney were to pursue the case, whoever ignited the pyrotechnic device would be charged. According to Fox News, the fire has since required over 500 personnel to help contain it. Unfortunately, wind patterns have made that all the more difficult.

“It burned in four different directions since we’ve been here,” said Ben Holmes, a U.S. Forest Service senior firefighter. “It was pushing to the east, then to the north, and then big westwardly wind shift, and (Sunday) it moved to the south. The wind has been pretty dramatically inconsistent.” 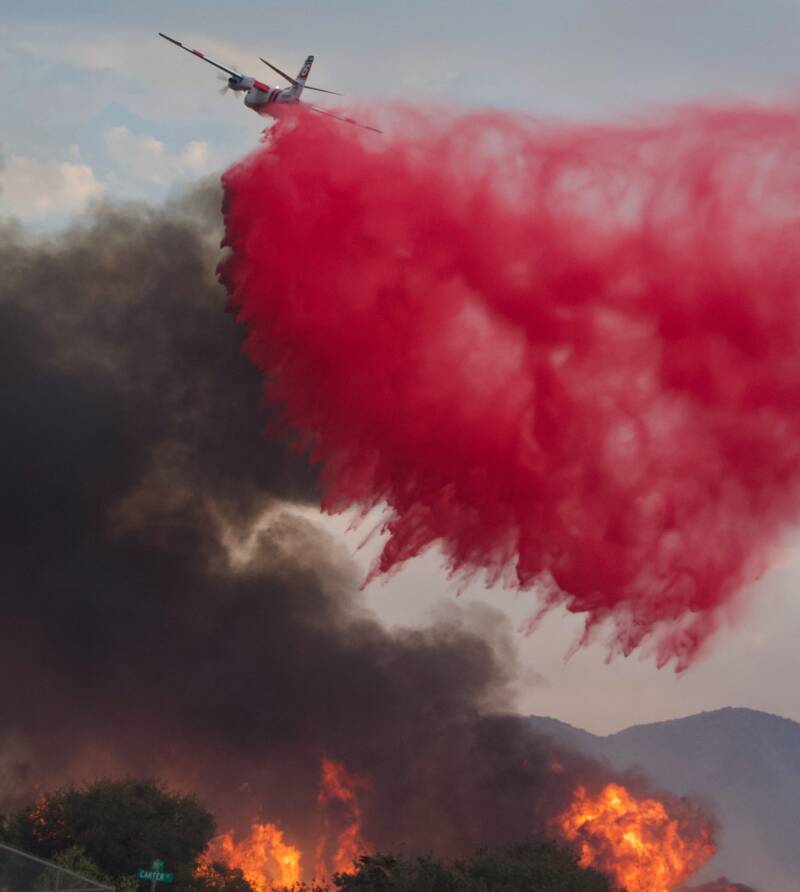 TwitterThe individuals responsible for starting the El Dorado wildfire have yet to be charged.

While the preventable nature of the El Dorado fire is certainly frustrating, it’s tragically dwarfed by the Creek Fire — which has grown to more than 135,000 acres. According to Fox News, all wildfires across California have since set a new record and scorched over two million acres of land in total.

As for the seemingly innocuous gender reveal party that spawned the disastrous El Dorado blaze, this isn’t the first time. An off-duty U.S. Border Patrol agent shot at a target full of explosives as part of a gender reveal party in 2017 — which led to a 47,000-acre fire in Arizona and $8 million in damage.

While not fire-related, one woman in Iowa even died during a gender reveal party in 2019 that for some reason involved a pipe bomb. Ultimately, the National Park Service estimates that nearly 85 percent of wildfires in the U.S. are caused by humans.

These are mostly caused by unattended campfires, cigarettes, the burning of debris, or equipment malfunctions. The remaining 15 percent have natural causes, such as lightning strikes — while climate change is rapidly increasing the wildfire risk all over the world.

In California, there have been 900 wildfires since Aug. 15, 2020. Two of the three largest fires in California history are currently burning in the San Francisco Bay Area, as 14,000 firefighters are battling blazes at around two dozen fires across the state.

Hopefully, their efforts make a difference sooner rather than later.

After learning about the gender reveal party that sparked the El Dorado wildfire in California, take a look at California’s wildfires in 21 gut-wrenching photographs. Then, learn about California’s pollution problem in 31 staggering photos.