Inside The Disturbing History Of Flaying, The Centuries-Old Practice Of Skinning People Alive

Likely starting with the ancient Assyrians of Mesopotamia, flaying has long been one of the most excruciating forms of torture the world has ever seen. 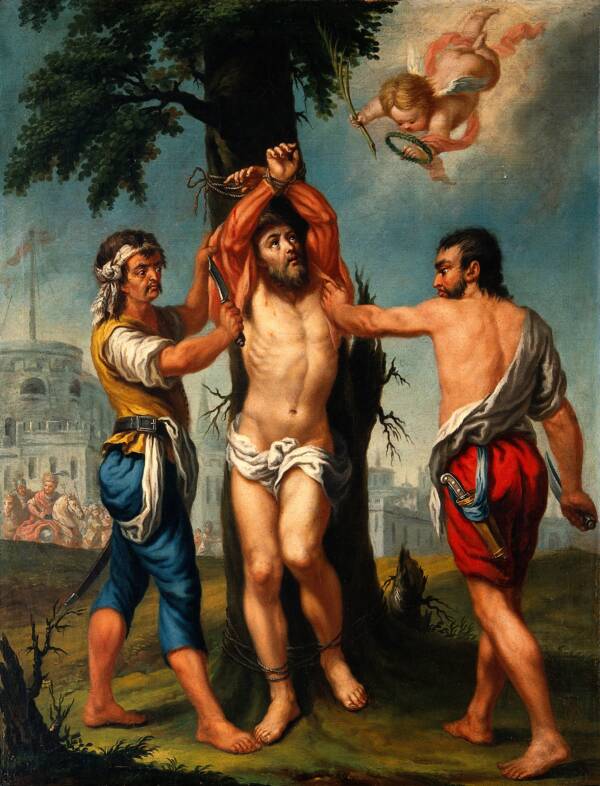 Throughout recorded history, humans have always shown extraordinary creativity in coming up with increasingly horrific ways to torture and kill each other. None of these methods quite compare, however, to being flayed — or skinned alive.

A favorite of Game of Thrones‘ Ramsay Bolton, flaying actually long predates the medieval era that the show and its source novels evoke.

Numerous ancient cultures practiced the art of skinning alive, including the Assyrians and the Popoloca, but examples of people flaying are also present in China during the time of the Ming Dynasty and in Europe during the 16th century.

And no matter where and when it was practiced, flaying remains one of the most disturbing types of torture and execution ever devised.

The Ancient Assyrians Flayed Their Enemies To Frighten Them

Stone carvings from the time of ancient Assyria — around 800 B.C.E. — depict warriors methodically removing the skin from prisoners’ bodies, marking them as one of the first cultures to partake in the brutal torture.

The Assyrians, according to National Geographic, were one of the world’s earliest empires. Populating the regions of modern-day Iraq, Iran, Kuwait, Syria, and Turkey, the Assyrians grew their empire by taking over enemy cities one by one using newly developed warfare techniques and iron weapons.

They were ruthless and militaristic, so naturally they tortured their prisoners. 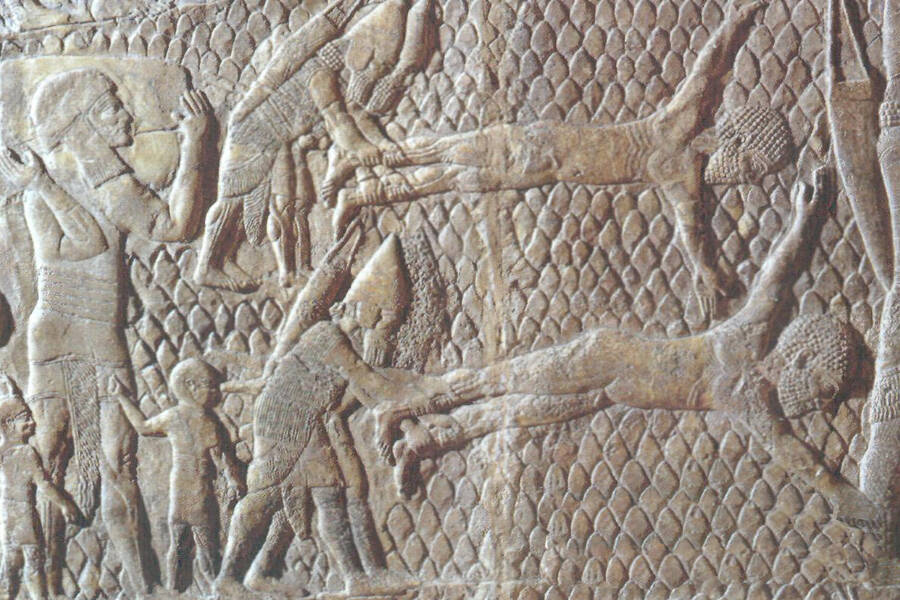 One account of Assyrian flaying comes from a report by Erika Belibtreu with the Biblical Archaeological Society, in which the Assyrian king, Ashurnasirpal II, punished members of a city who resisted him instead of immediately submitting.

The Assyrians likely flayed their enemies to frighten others — a warning as to what would become of them should they not submit — but history also has examples of rulers flaying their own people to make a point, as well.

The Ming Dynasty maintained a tyranny over China for nearly 300 years between 1368 and 1644, and despite often being heralded as a time of beauty and prosperity, as The Daily Mail reported, there is a dark side to the Ming Dynasty as well. 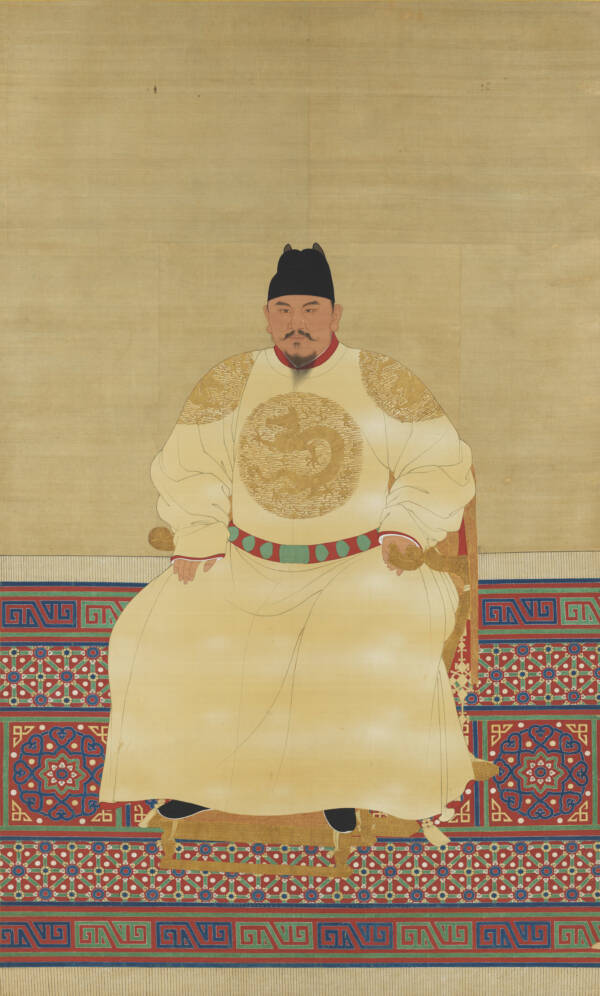 Public Domain
A portrait of Ming Emperor Taizu, the ruler who began the Ming Dynasty in China by driving out the Mongols.

Emperor Taizu, who reigned during the Hongwu Period, proved to be especially cruel. He had once commanded the army that expelled the Mongol invaders from China in 1386 and gave the dynasty its name, “Ming,” a Mongol word meaning brilliant.

He also made it a capital offense for anyone to criticize him, and when he found out that his chief minister had been accused of plotting against him, he killed all of the man’s relatives, friends, and associates — in total, around 40,000 people.

Some of those people were flayed, and their flesh was nailed to a wall, letting others know that Emperor Taizu would not tolerate anyone questioning his authority.

But while flaying is an especially cruel, brutal act, it has not exclusively been a method employed by ruthless tyrants. Some cultures flayed people as part of sacrificial rituals.

The Popoloca Skinned People Alive As Sacrifices To “The Flayed God”

Before the Aztecs, the region of modern-day Mexico was inhabited by a people known as the Popoloca, who worshiped, among others, a god named Xipe Totec.

Xipe Totec translates to “our Lord of the flayed.” Ancient priests of Xipe Totec would ritually sacrifice their victims in a ceremony called Tlacaxipehualiztli — “to wear the skin of the flayed one.”

The ritual took place over the course of 40 days each spring — a chosen Popoloca would be dressed as Xipe Totec, wearing bright colors and jewelry, and ritually sacrificed along with war captives in exchange for a bountiful harvest.

The sacrifice involved two circular altars. On one, the chosen Popoloca tribe member would be killed in a gladiator-style battle. On the other, they were flayed. The priests would then wear the flayed skin before depositing it into two holes in front of the altars. 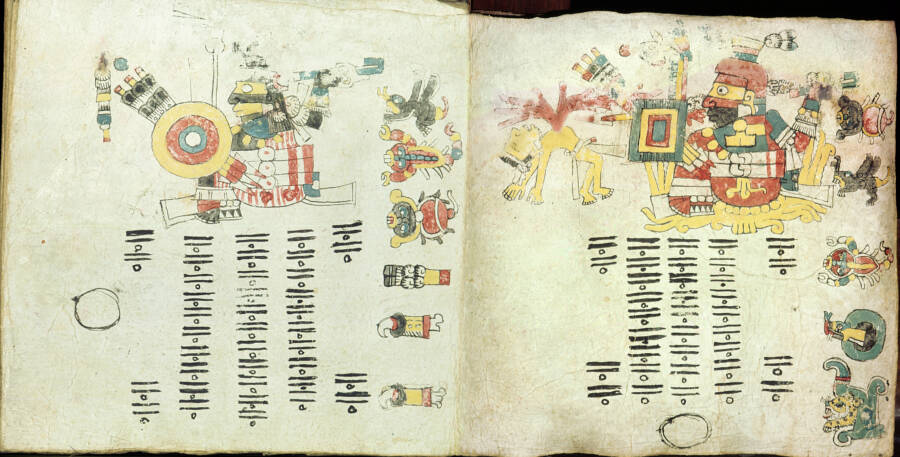 Werner Forman/Getty ImagesA page from the Codex Cospi, depicting the ritual of Xipe Totec, the god of sunset and sacrificial pain.

The rituals were depicted in art found in both Popoloca and Aztec temples — an artistic trend that didn’t end in Mesoamerica.

Flaying In Art, Folklore, And Legend

Flaying continued to play a prominent role in cultures all over as recently as the 16th century, when several famous art pieces emerged depicting individuals being flayed.

One piece titled The Flaying of Marsyas, The Met estimates, was created around 1570 by an Italian artist known as Titian. It depicts Ovid’s tale of the satyr Marsyas, who lost a musical contest against Apollo and was punished by having his skin peeled off.

Another painting, The Flaying of Saint Bartholomew, depicts the saint — one of the 12 disciples of Jesus — being martyred and skinned alive after he converted Polymius, the king of Armenia, to Christianity.

Folklore and fairy tales across the world, too, feature stories of skinning, as gathered by the Marin Theatre Company.

The Irish legend of the selkie, for instance, speaks of shapeshifting creatures that can shed their skin and walk the land as humans.

One story tells of a hunter who steals a selkie’s skin, forcing the naked, human-like creature to marry him until, one day, she finds her skin again and flees into the sea. 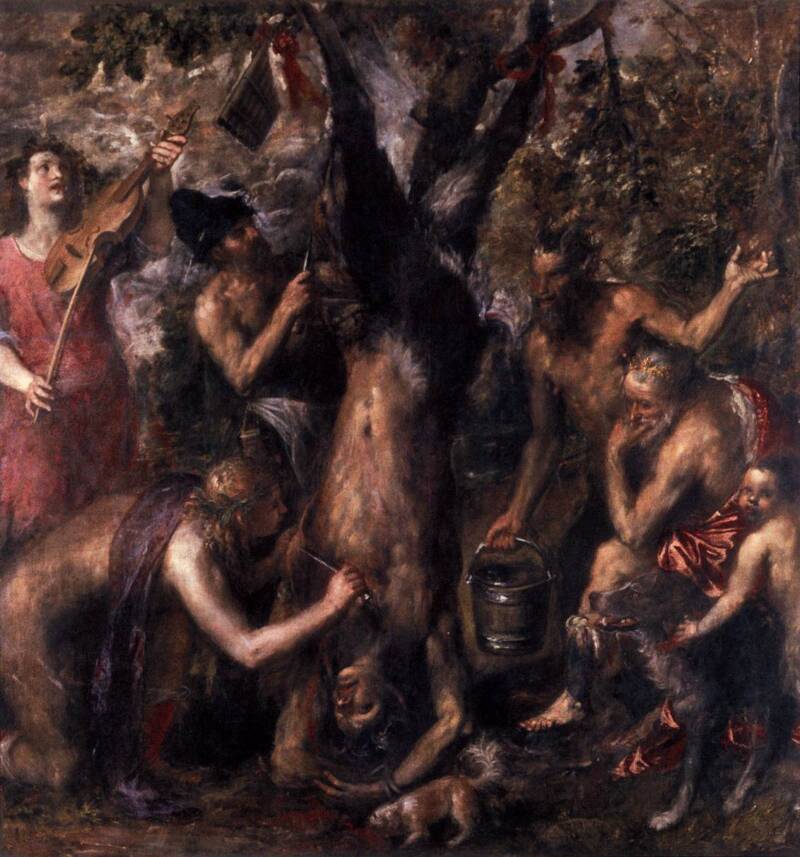 Public Domain‘The Flaying Of Marsyas’ by the Italian painter Titian, likely painted around 1570.

An old Italian tale, “The Old Woman Who Was Skinned” is a bit more on the nose, telling the tale of two old spinster sisters who live in the woods. One of the sisters comes across some fairies and makes them laugh — and as a reward, they make her young and beautiful again.

When the young sister inevitably marries the king, the still-old sister becomes jealous. The young bride then tells her old sister that all she has to do to be young again is skin herself. The old sister then finds a barber and demands he skin her — and she dies of blood loss.

In Iceland, there are legends of lappish breeches, otherwise known as “corpse breeches.” These pants, the stories say, will make whoever wears them rich — but obtaining them is a bit complicated.

The first step is to get someone to sign their skin over to you before they die. Once they’re dead, you have to dig up their body, skin their flesh from the waist down, and tuck a piece of paper containing a magical sigil into the “pocket” — or, in other words, the scrotum — along with a coin stolen from a widow.

But once all the grisly work is done, the magical scrotum will always be replenished with money.

And then, of course, there are the Dineh and Navajo legends of the skinwalker, which can assume the appearance of other people and animals.

Clearly, the concept of flaying is one that has disturbed people across cultures and time for nearly all of recorded human history — and for good reason.

Thankfully, though, flaying is now considered a violation of human rights and is illegal in every country.

Now that you’ve learned about flaying, broaden your torturous horizons by learning about the Spanish Donkey, the medieval torture device that mangled genitalia. Or, explore the misery of being crushed to death.