Discover the hidden history of Friedrich "Frederick" Trump who operated hotels and restaurants in the Pacific Northwest but remains best known as the grandfather of Donald Trump.

Donald Trump is fond of complaining about “chain migration,” a term used by critics to describe the act of migrants helping their family members move to the United States. Yet Donald Trump himself would’ve never been born in America if it weren’t for this very practice.

In 1885, a German teenager who would later become Donald Trump’s grandfather only dared to cross the Atlantic because his sister Katherine had already done so a year prior and was waiting to receive him in New York. 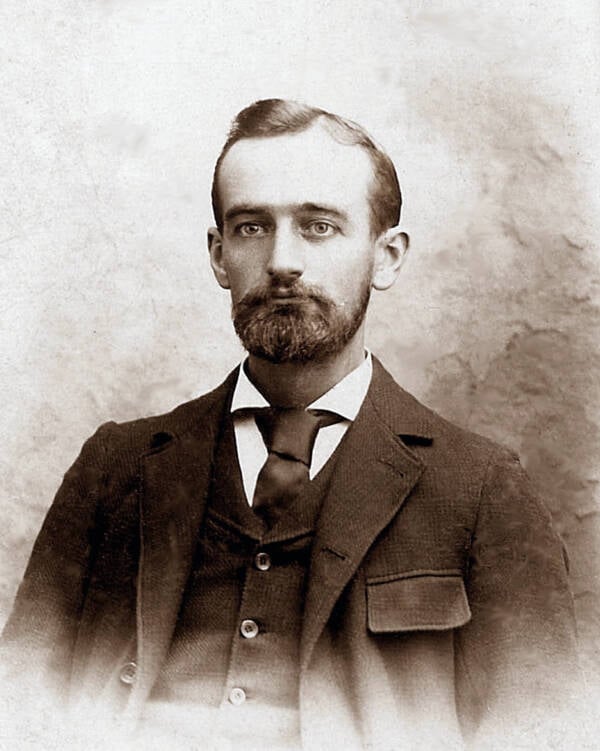 Wikimedia CommonsBefore Frederick Trump became Donald Trump’s grandfather, he was an illegal emigrant that was forced to leave Germany.

When Frederick Trump set out to emigrate from Germany, he was probably unaware that he was permanently sacrificing his chance of ever being able to return and reside in the land of his forefathers.

In 1869, Friedrich “Frederick” Trump was born to “honest, plain, pious” parents, as he would later describe them. His mom and dad ran a small vineyard in the little German town of Kallstadt, renowned for its wine and pig stomach.

The family’s financial situation was always strained, but it became even direr when Frederick’s father, Johannes, died when the boy was only eight years old. Too frail to work in the vineyard, Frederick became an apprentice at a barbershop in a nearby village.

After completing his apprenticeship, Frederick returned to his hometown only to discover that it was too small for another barber. Unable to find work, Frederick believed that he would be doomed to a life of hardship and poverty if he remained in Kallstadt.

Although he could — and was actually required to — join the military, he chose to dodge the draft by escaping the country altogether.

So late one October night, Frederick fled his hometown, leaving behind a single farewell note for his mother. After a 350-mile journey to the port city of Bremen, Frederick booked a one-way ticket to America. 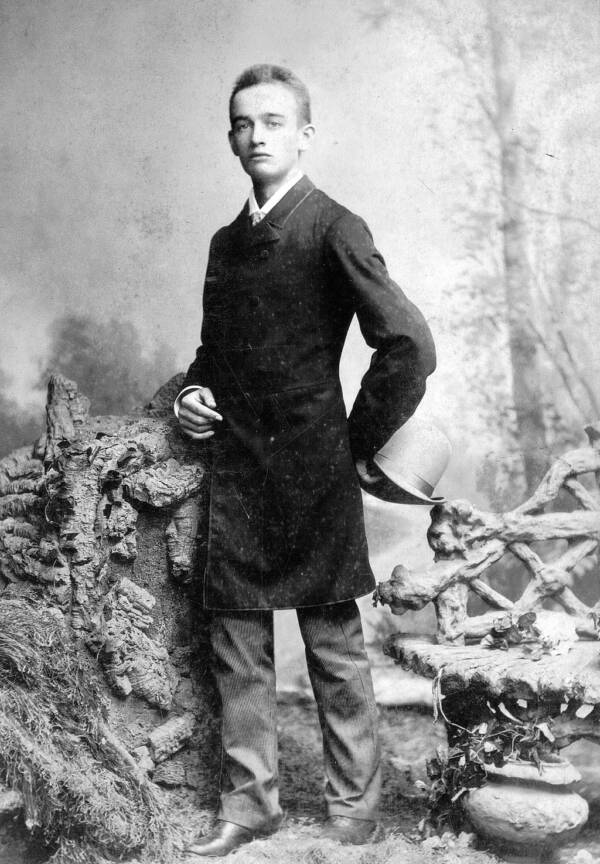 Public DomainFrederick Trump in 1887. This photo was taken just two years after his arrival in America.

On the night that Frederick Trump abandoned his German home, he was a desperate, under-educated, and under-skilled teen. But the years he spent in his new country brought him bounteous reward. It certainly helped that America was so eager for German migrants at the time that they were willing to overlook any law-breaking he did to get to the country.

After his arrival in New York, Frederick made his way to the West Coast and settled in Seattle in 1891. He bought a local restaurant called the Poodle Dog, which he renamed Dairy Restaurant.

Dairy Restaurant was in Seattle’s red-light district, and Poodle Dog had most likely served as a venue for prostitutes. However, it’s unknown to what extent Trump maintained this policy after he took over the space.

In the following years, Trump traveled through several frontier mining towns and opened more restaurants, taverns, and hotels, employing the business strategy of “mining the miners” who had journeyed to the Pacific Northwest in search of gold.

At one point, he took his business to Canada, operating a restaurant, bar, and brothel in British Columbia. By 1892, he was an American citizen, and at the dawn of the new century, Frederick had amassed a fortune.

But by 1904, Frederick had returned to Germany. His new wife, Elizabeth Christ Trump, was also a German native whom Frederick had met just a couple of years prior. Despite Frederick’s good fortune in America, his wife missed her native land and longed to return home. So Frederick agreed to bring his family back to Germany and start a new chapter there.

However, Frederick and his family were unceremoniously thrown out of Germany in less than a year — and forced to return to the United States.

“A Lightning Strike From Fair Skies” 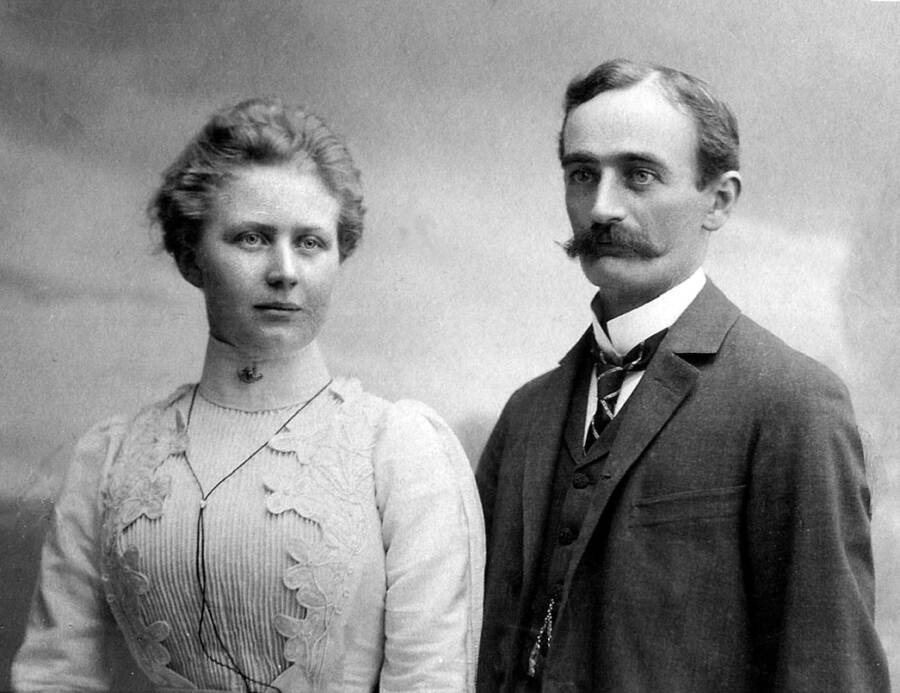 “Friedrich Trump emigrated from Germany to the USA in 1885. However, he failed to deregister from his homeland and had not carried out his military service, which is why the authorities rejected his attempt at repatriation.”

Indeed, at the time that Trump fled his home country, it was a requirement for him under the government to serve in the military. But he never followed through.

As punishment, Frederick Trump had to leave the kingdom of Bavaria within eight weeks of officials issuing the royal decree. Attempting to appeal to a higher power, Trump wrote a letter to Prince Regent Luitpold, addressing him as “the much-loved, noble, wise and righteous sovereign and sublime ruler,” and pleaded for his forgiveness. Frederick wrote:

“We were confronted all at once, as if by a lightning strike from fair skies, with the news that the High Royal State Ministry had decided that we must leave our residence in the Kingdom of Bavaria.

We were paralyzed with fright; our happy family life was tarnished. My wife has been overcome by anxiety, and my lovely child has become sick. Why should we be deported? This is very, very hard for a family.”

Ultimately, Luitpold rejected Trump’s request, forcing Kallstadt’s native son to board the Hapag steamship Pennsylvania with his wife and daughter to head back to America on July 1, 1905. As they left Germany, Frederick Trump’s wife was three months pregnant with Donald Trump’s father, Fred. 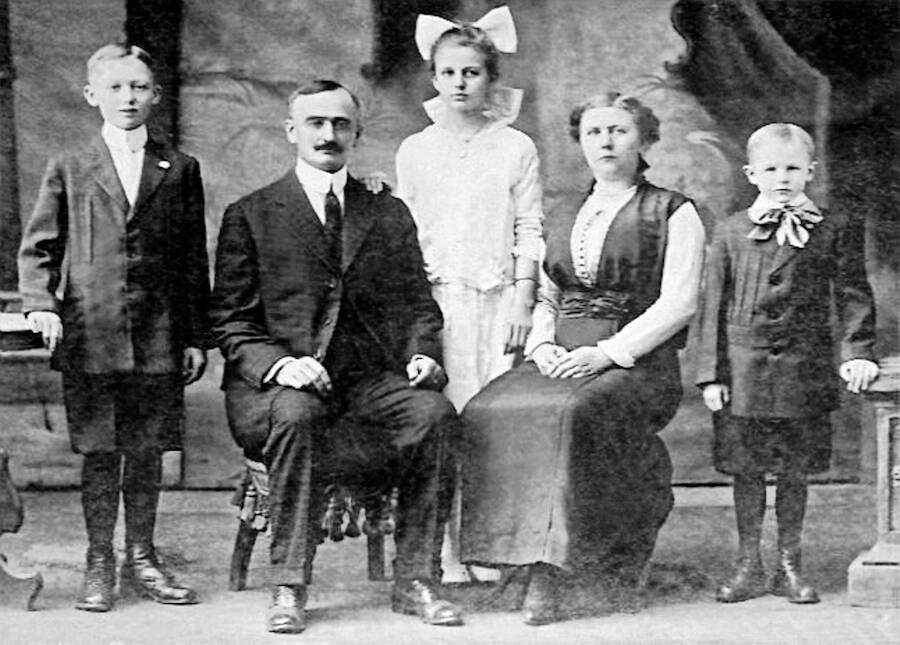 Public DomainFrederick and Elizabeth Trump with their three children in 1915.

Donald Trump has claimed that he wasn’t aware that the flu can kill. And yet it was the 1918 flu pandemic that ended his grandfather’s life when he was just 49 years old.

Frederick Trump was one of the 675,000 Americans killed by the Spanish flu. He died just a little over a decade after he returned to New York. At the time, Donald Trump’s father Fred was just 12 years old.

With no patriarch in charge, Elizabeth took over and managed the real estate ventures that her husband had initiated. Eventually, her son Fred would take over the family business, which was then called E. Trump & Son. By the end of Fred’s life in 1999, he had incorporated more than 27,000 New York apartments and row houses into his real estate empire.

As for Donald Trump’s grandfather, he died in 1918, but in a little less than a century, his grandson would come to hold the highest office in the land.

But it all would have been undone in 1905 if, instead of turning him away, Prince Regent Luitpold had welcomed Donald Trump’s grandfather back into the German fold.

After learning about Donald Trump’s grandfather, Frederick Trump, discover the full history of Donald Trump. Then, check out 32 Donald Trump quotes you have to read to believe.