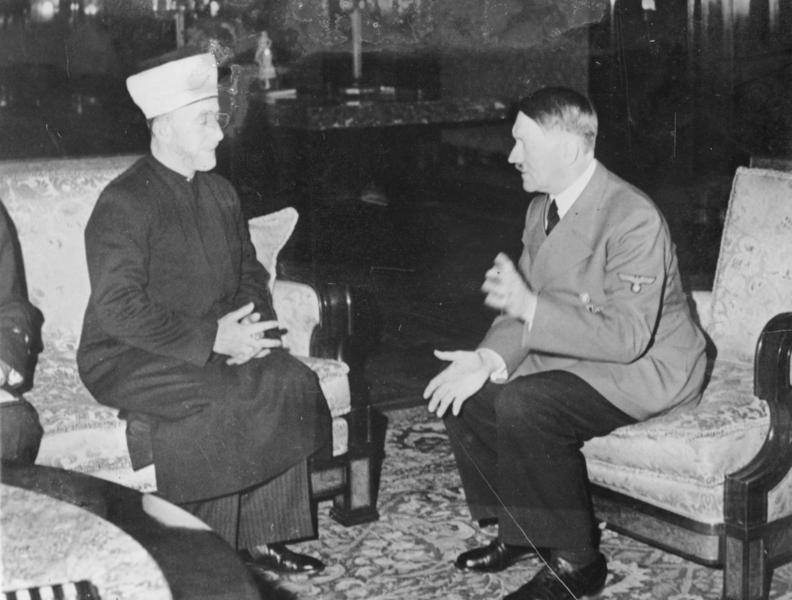 As divisions of the Waffen-SS — the armed wing of the group most responsible for carrying out Nazi atrocities — the three Balkan units that Amin al-Husseini helped raise indeed committed many horrific acts.

In June 1944, for example, while overseeing Jewish civilians forced into labor in Tuzla, Bosnia, the 13th division abused the workers before massacring more than 20 who could no longer work. A month earlier in Pristina, Kosovo, the 21st division raided Jewish homes and rounded up approximately 280 civilians for transport to Bergen-Belsen concentration camp.

That number represents just half of the Jewish civilians that the 21st division rounded up for concentration camps in mid-1944, and such exploits certainly aren’t the extent of the Bosnian divisions’ atrocities. 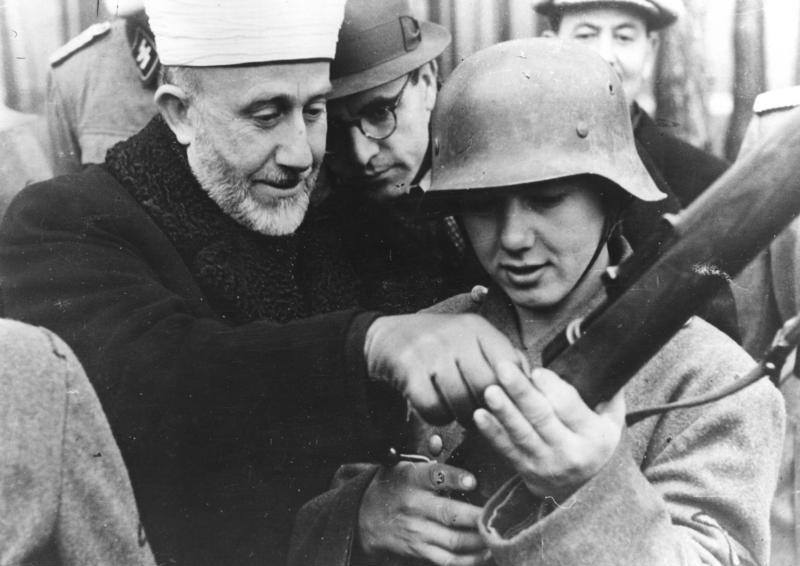 Mielke/German Federal ArchivesAmin al-Husseini among recruits to the Bosnian SS divisions in November 1943.

Furthermore, such atrocities don’t appear to be out of character with al-Husseini’s beliefs on the Jewish Question, at least those recorded by historians like Norman Stillman and Lukasz Hirszowicz. Both historians, for example, cite a March 1, 1944 radio broadcast from Berlin in which al-Husseini reportedly urged his Arab listeners, “Kill Jews wherever you find them, for the love of God, history and religion.”

And when al-Husseini wrote a pamphlet, Islam and Judaism, for the 13th division, he reportedly ended it with a quote attributed to Abu Hurairah, a companion of Muhammad’s, reading, “The Day of Judgement will come, when the Muslims will crush the Jews completely: And when every tree behind which a Jew hides will say: ‘There is a Jew behind me, Kill him!'” 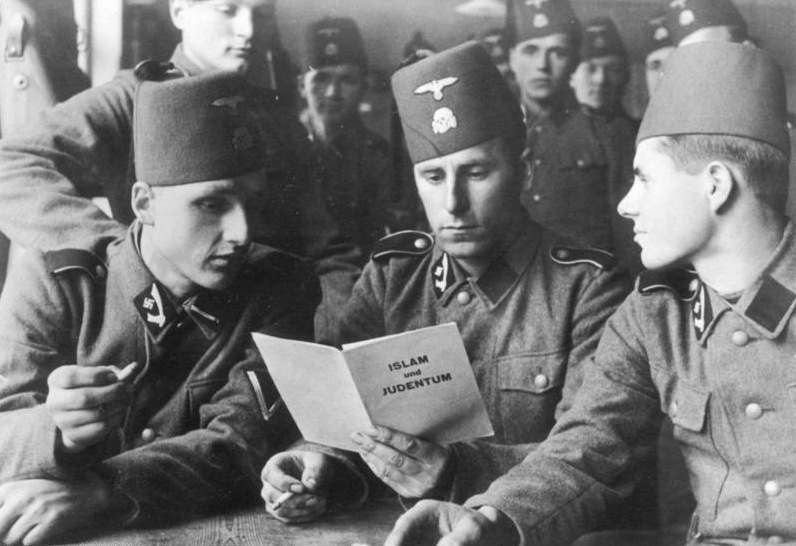 Mielke/German Federal ArchivesBosnian Muslim soldiers recruited to the SS by Amin al-Husseini read an inflammatory pamphlet written by him entitled Islam and Judaism in France, 1943.

It’s information like this that has compelled some today to exploit and misrepresent al-Husseini’s legacy in service of modern Islamophobia.

As recently as October 2015, none other than Israeli Prime Minister Benjamin Netanyahu told the World Zionist Congress in Jerusalem that al-Husseini persuaded Hitler to exterminate the Jews as opposed to deporting them when the two met on November 28, 1941, in essence blaming a Muslim for the Holocaust.

Several months before Netanyahu’s remarks, the Stop Islamization of America group sponsored large ads that ran on the sides of 84 Philadelphia municipal buses, baring a photo of al-Husseini’s meeting with Hitler and reading, “Adolf Hitler and his staunch ally, the leader of the Muslim world, Haj Amin al-Husseini” as well as “Islamic Jew-hatred: It’s in the Quran.” The year before, the same ads had started running on busses in Washington, D.C. 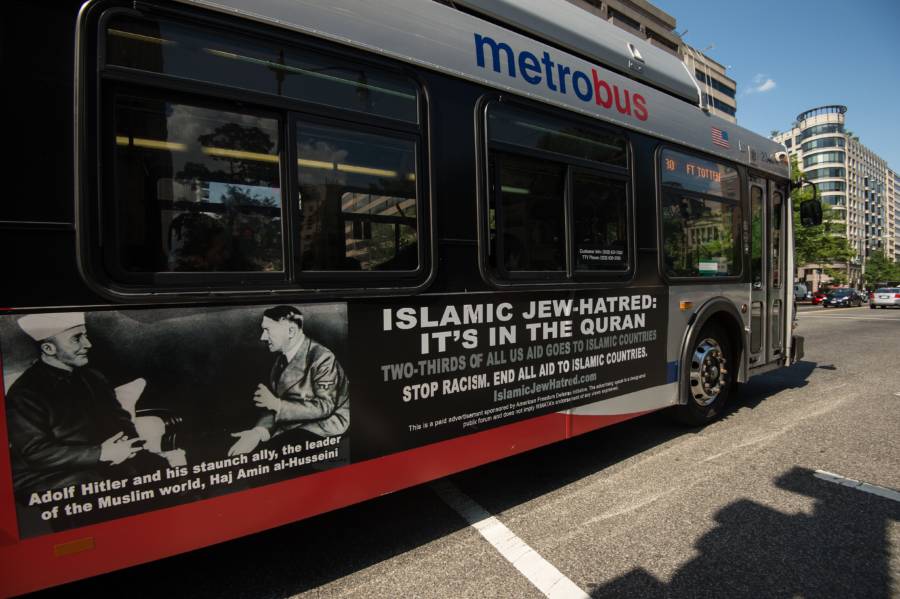 NICHOLAS KAMM/AFP/Getty ImagesA bus displaying one of the controversial ads featuring Amin al-Husseini and Adolf Hitler drives through Washington, D.C. on May 23, 2014.

Those incidents, and the legacy of al-Husseini as a whole, have recently cropped up on sites like Jihad Watch, Breitbart, and the official website of Glenn Beck, where writers and commenters first inflate al-Husseini’s connection to the Nazis and then use that as a way to spread Islamophobia. 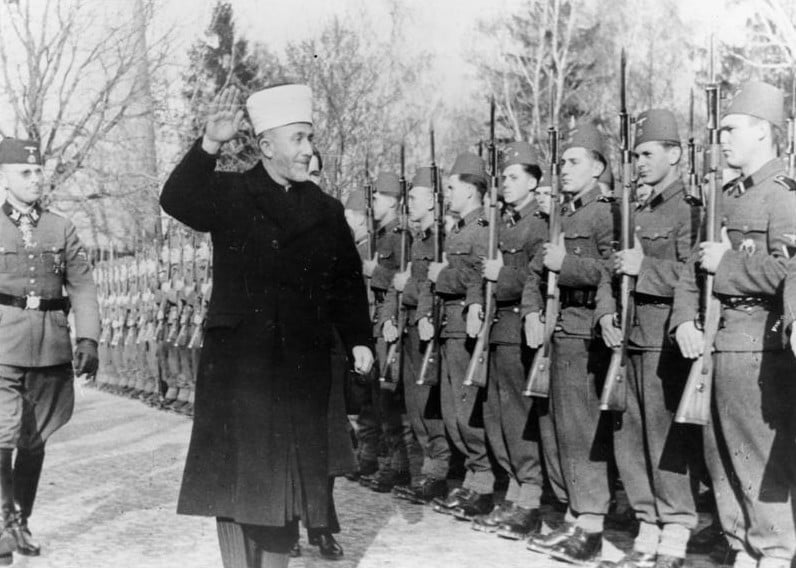 However, while al-Husseini’s anti-Zionism and anti-Semitism are indeed a matter of record and while he indeed aided the Nazis with propaganda and troop recruitment that led to some truly horrible acts, any attempt to turn him into this kind of missing link both ignores the vastly different geopolitical realities separating his time from ours and distorts the historical facts in question.

First and foremost, the long since published and widely available official record of al-Husseini’s meeting with Hitler contains, despite Netanyahu’s claims, nothing at all suggesting that al-Husseini initiated the Holocaust.

In fact, that record reveals the version of al-Husseini agreed upon by most historians, not to mention, say, TIME and the United States Holocaust Memorial Museum. That is, the meeting record shows al-Husseini to simply be an opportunist somewhat overstepping his bounds, a leader on the run lucky to be granted a meeting with Hitler and using that opportunity to plead his case for Arab nationalism, a cause that none of the European powers were actually interested in supporting.

Essentially, al-Husseini spends the entire meeting telling Hitler that they have common enemies in the Jews and the British and asking him to make a public declaration of German support for Arab nationalism. Hitler then declines, insisting that they could only make such an agreement in secret, and the meeting ends.

Does al-Husseini prove himself here to be a power hungry anti-Semite? Yes. Does he prove himself to be the instigator of any practical action beyond the raising of the several troop units he would go on to raise? No.

So it is that the Free Arabian Legion and the Bosnian SS divisions — born conceptually at this meeting and an immediately preceding one between al-Husseini and German Foreign Minister Joachim von Ribbentrop — remain the practical extent of this surprising historical episode, one that denies, despite modern claims to the contrary, any ugly, black-and-white categorization of Islam as villainous.

Such episodes complicate popular understandings of “the good war,” a notion made possible by ignoring and distorting historical fact. Yet, at the same time, let us not distort the facts of such episodes themselves, painting over black and white with only more black and white.

Next, read up on the four most devastating moments of the Nazis’ reign and some of the things that the horrifying Nazi research contributed to medical science. Then, check out some of the most fascinating and little-known World War 2 facts.