The Complicated Story Of Freydís Eiríksdóttir, The Legendary Viking Sister Of Leif Erikson

Though some ancient Norse legends portray Freydís Eiríksdóttir as a fearless warrior, others cast her as a merciless murderess. 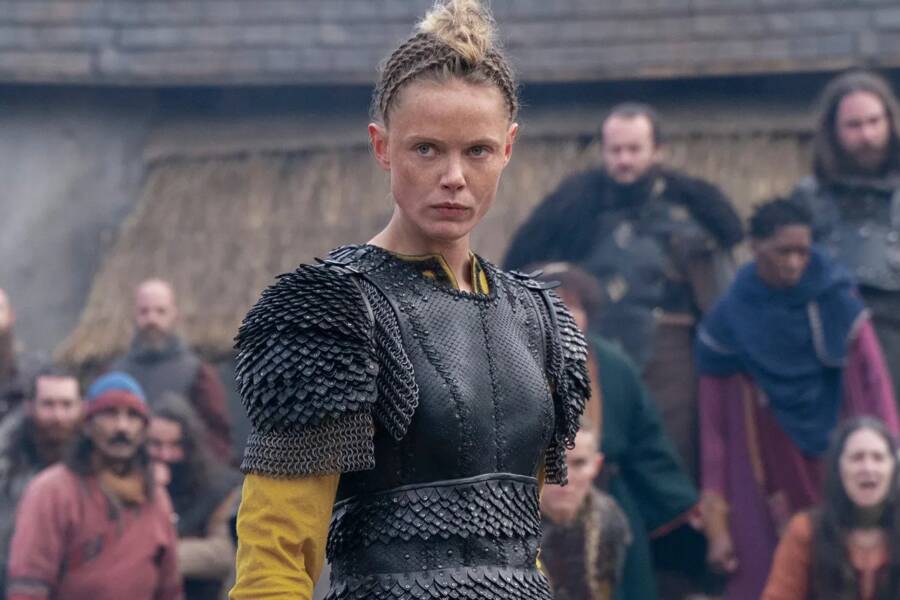 NetflixFreydís Eiríksdóttir is described in two Norse sagas, though it’s unclear if she actually existed.

When the Vikings sailed to Vinland — present-day Newfoundland — over 1,000 years ago, they had multiple women in their midst. One of them, Freydís Eiríksdóttir, carved her name into Norse legend during the expedition. But not all sagas portray Freydís in the same light.

The sister of Leif Erikson, Freydís appears in two sagas, Eirik the Red’s Saga and The Saga of the Greenlanders. Though the bones of both Icelandic sagas are more or less the same, the first saga describes Freydís in glowing terms — while the other cast her as bloodthirsty, cunning, and cruel.

This is the murky legend of Freydís Eiríksdóttir, the Viking shield maiden portrayed on Netflix’s Vikings: Valhalla.

All that is known about Freydís Eiríksdóttir is based on Norse legends, which means that it’s not 100 percent clear if she truly existed. But Icelandic sagas do seem to establish some facts about her life.

As History Extra explains, legend states that Freydís took part on the Viking expedition to Vinland. Since that expedition happened around 1000 C.E., Freydís was likely born around 970 C.E. 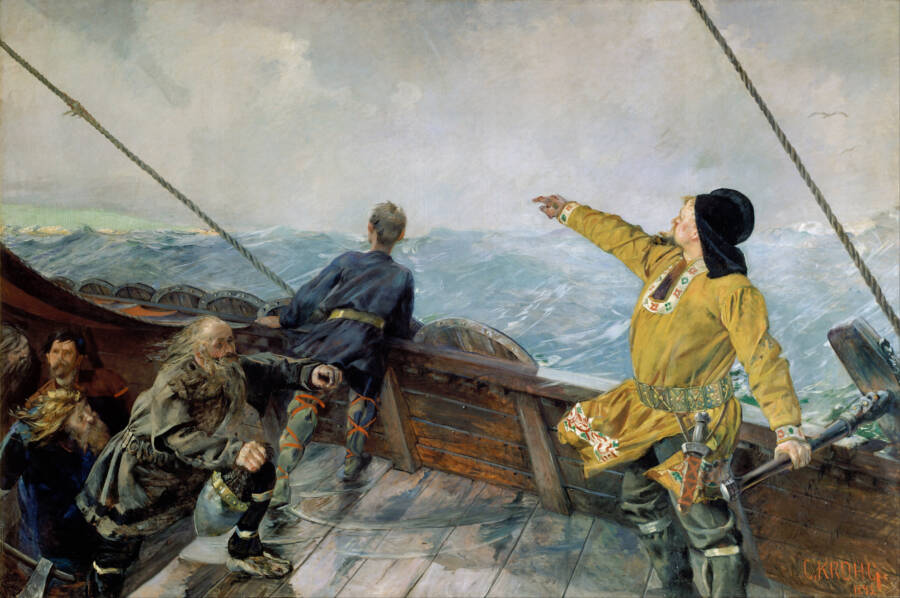 Despite her lower status, Freydís allegedly accompanied the Viking expedition to Vinland, where she settled with the others. The group may have established a community at L’Anse aux Meadows in Newfoundland some 500 years before Columbus reached North America, as archaeologists have found traces of traditionally female tools like spindles there.

But what exactly happened in Vinland is unclear. Two Viking legends — The Saga of the Greenlanders and Eirik the Red’s Saga — portray Freydís Eiríksdóttir’s actions at the settlement in completely different ways.

The Saga of the Greenlanders

Likely written in the 13th or 14th centuries, The Saga of the Greenlanders describes the Vikings’ expedition to Vinland circa 1000 C.E. — and depicts Freydís Eiríksdóttir as a mercurial murderess.

In the saga, Freydís is presented as a “very haughty” woman who married her husband “chiefly on account of his money.” As the Viking Herald explains, her desire for riches led her to join her brothers, Helgi and Finnbogi, on the expedition to Vinland. But Freydís had a trick up her sleeve.

Freydís, Helgi, and Finnbogi agreed to each take 30 “fighting men” to Vinland. But Freydís, determined to profit more from the journey than her brothers, secretly added five extra warriors to her ship. 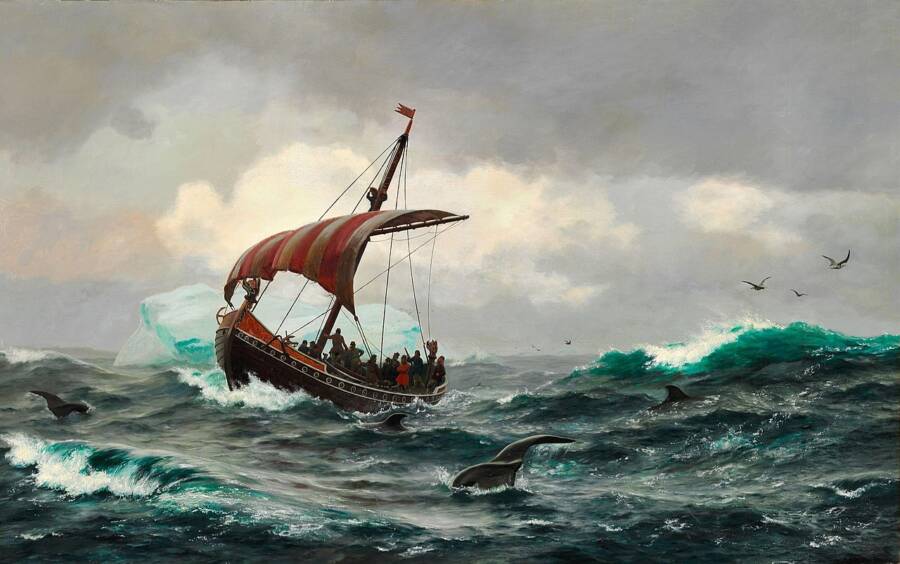 Public DomainA depiction of a Viking voyage taking place circa 1000 C.E., when the Vikings reached Vinland

Once they arrived in Vinland, Freydís’s greed quickly caused problems between her and her brothers, who believed they would share profits equally. Helgi told her: “In malice are we brothers easily excelled by thee.”

But Freydís Eiríksdóttir didn’t stop there. As the The Saga of the Greenlanders recounts, she pretended to make peace with Finnbogi by asking him for his large ship so that she could “go from hence.” Then, she went home and told her husband that her brothers had beaten her.

“[T]hey beat me, and used me shamefully,” Freydís claimed according to the saga. Then, she asked her husband to avenge her, threatening: “I will separate from thee if thou avengest not this.”

In response, Freydís’s husband slaughtered her brothers and their men. But he hesitated before killing any women. So, Freydís demanded an ax.

“So was done,” the saga recounts, “upon which she killed the five women that were there, and did not stop until they were all dead.”

Though Freydís Eiríksdóttir allegedly tried to conceal what she had done once she and her people returned home, word soon reached her brother, Leif Erikson. History Extra writes that the revelation ruined Freydís’s reputation and that she spent the rest of her life as an outcast.

According to the Viking Herald, some historians believe this portrayal of Freydís may be Christian propaganda painting her as a ruthless, conniving killer who wouldn’t conform to Christian values.

But that’s not the same story told in Eirik the Red’s Saga. 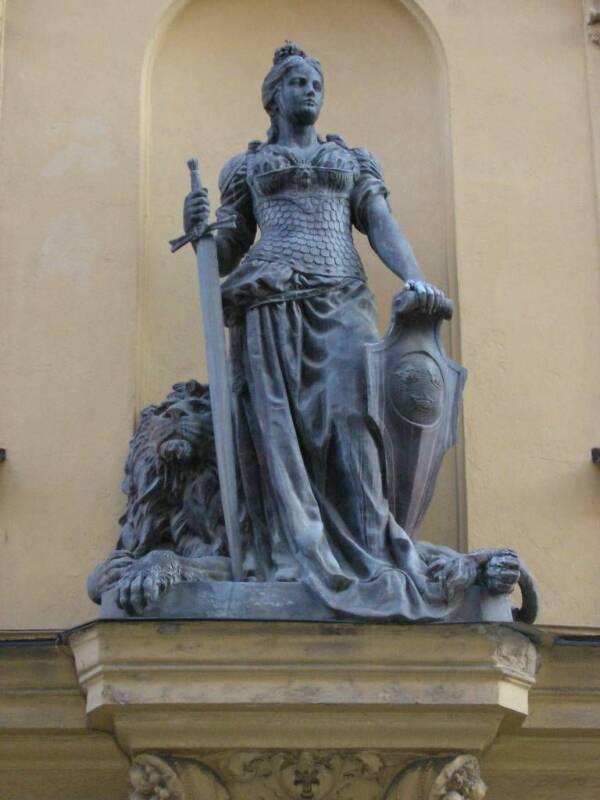 Eirik the Red’s Saga is thought to have been written in the 13th century, though Viking Herald reports that it was written after The Saga of the Greenlanders. In this Norse legend, Freydís Eiríksdóttir is portrayed in a more sympathetic light.

Like in The Saga of the Greenlanders, Freydís is described as part of the Viking expedition to Vinland. There, History Extra reports that she and the others made contact with “skrælings” (Indigenous people) and that their early peace overtures soon devolved into outright violence.

When Freydís was eight months pregnant, the Viking Herald reports that skrælings attacked their camp, causing many of the men to run away in fear.

“Why run you away from such worthless creatures, stout men that ye are, when, as seems to me likely, you might slaughter them like so many cattle?” Freydís cried. “Let me but have a weapon, I think I could fight better than any of you.”

Freydís tried to flee with the others but soon lagged behind. When she came across a dead man from their company, she grabbed his sword and turned to face the oncoming skrælings. As they approached, Freydís beat her naked breast with the sword — frightening the skrælings, who fled.

In this version, Freydís is presented completely differently. Instead of using her femininity to provoke her husband into slaughtering her brothers, Freydís is the epitome of feminine bravery.

But in recent years, a third saga of Freydís Eiríksdóttir has emerged. In Netflix’s Vikings: Valhalla, she is yet again depicted in a different way. 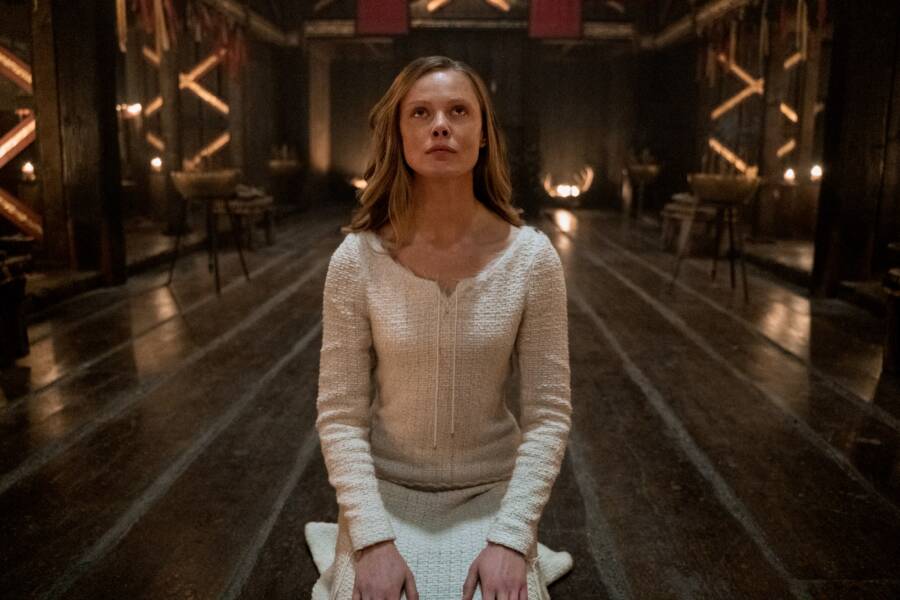 The Freydís Eiríksdóttir character depicted in Netflix’s Vikings: Valhalla (played by actress Frida Gustavsson) bears little resemblance to the woman from Viking lore. In the show, Freydís doesn’t go to Vinland at all.

Instead, hers is a story of vengeance. The Freydís of the show takes vengeance on a Christian Viking who raped her. Because of this her brother, Leif, is sent to fight for the King of the Danes.

Freydís soon becomes a Viking shield maiden who defends the city of Kattegat, even beheading an enemy in the season finale.

Though Netflix’s narrative is quite from Freydís Eiríksdóttir’s depiction in Norse legend, there are some similarities. In all three sagas, Freydís is Leif Erikson’s sister, and a fierce and determined warrior in her own right.

At the end of the day, it’s unknown if she existed at all. But something about the Freydís Eiríksdóttir legend has remained alluring for over 1,000 years, from the Norse sagas to Netflix.

After reading about Freydís Eiríksdóttir, discover something new with these 32 fascinating facts about the Vikings. Or, go inside the surprising truth about Viking helmets, which likely didn’t have horns despite their ubiquitous portrayal in popular culture.