Soviet Suppression And The Second Coming Of Genghis Khan 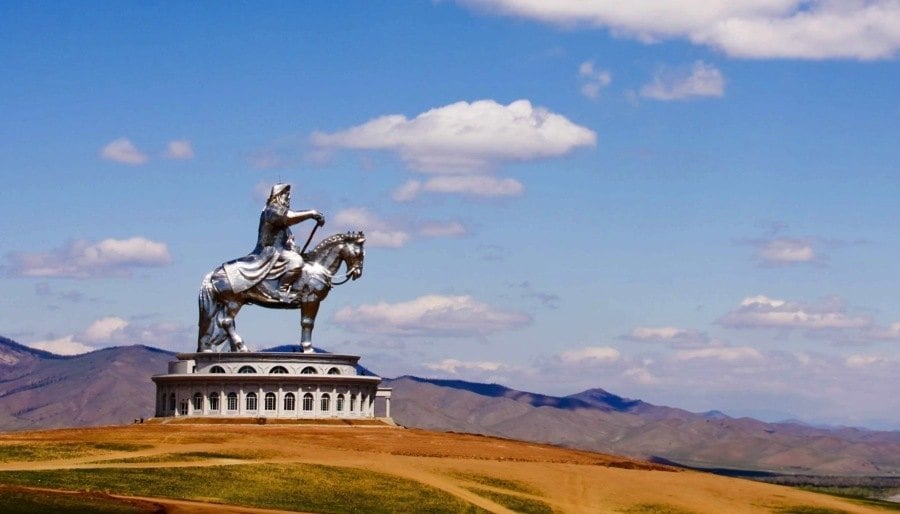 The 40-meter tall statue of Genghis Khan looks out over Mongolia. Source: flickr.com

Centuries after his death, Genghis Khan still puts fear into the hearts of powerful governments. In July, China announced that it was deporting 20 foreign tourists for watching a documentary about the 12th and 13th century Mongolian conqueror. Chinese authorities arrested the group of South African, British, and Indian travelers after discovering they had put on a feature about Genghis Khan in their hotel room. Apparently, the Communist officials found the documentary to be terroristic propaganda.

For much of the 20th century, another regional power, the Soviet Union, actively persecuted Mongolians interested in the life of Genghis Khan. For them, as for the Chinese officials in the news this summer, the idea of a powerful leader from the steppe organizing his people to accomplish great feats was inherently threatening.

The Soviet era in Mongolia was swollen with repression. In the 1930s, Stalin’s henchmen killed between 15,000 and 20,000 Buddhist monks and razed over 2,000 monasteries in a so-called Great Purge of Mongolia’s majority religion. By the end of that bloody decade, the Soviets had killed between 3 and 5 percent of the total Mongolian population. Two Mongolian prime ministers were among the dead.

Sometime during this period, the sulde, or spirit banner, of Genghis Khan disappeared. In medieval Mongolian culture, the sulde was a horsehair flag believed to preserve the soul of great military leaders. Though it had flown in a Buddhist temple in Ulaanbaatar since at least the 1600s, the sulde never reappeared after the Soviet purge. 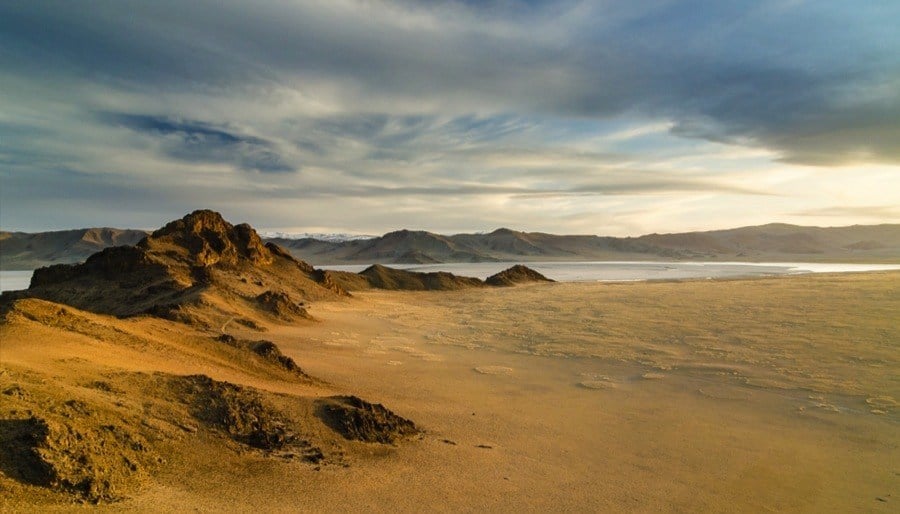 From the steppes of Mongolia, Genghis Khan conquered lands stretching from Beijing to the Balkans. Source: flickr.com

The spirit banner was almost certainly hidden or destroyed by the Soviets. Perhaps it will turn up one day in a basement archive in the Kremlin. Whatever its fate, its disappearance was likely connected to a wider Soviet campaign to obscure the history of Mongolia’s national hero.

The Soviets aimed much of their wrath at scholars trying to decipher ancient texts. As Jack Weatherford writes in Genghis Khan and the Making of the Modern World,

“Teachers, historians, artists, poets, and singers stood in danger if they had any association with the history of Genghis Khan’s era. The authorities secretly executed some of them. Other scholars lost their jobs, and together with their families were expelled from their homes in the harsh Mongolian climate. They were also denied medical care, and many were marched off into internal exile at various locations of the vast open expanse of Mongolia.”

In one instance, the Soviets jailed a very talented Mongolian archaeologist named Damdiny Perlee for tutoring Daramyn Tömör-Ochir, a member of the Politburo of the Mongolian People’s Revolutionary Party. The Communists expelled Tömör-Ochir after he supported a mild 1960s Mongolian nationalist movement that produced a Genghis Khan stamp series. Years later the former high-ranking Communist was hacked to death by an ax in his own home, and many suspect the killers were Soviet spies.

Genghis Khan Today: In Mongolia, Back With A Vengeance 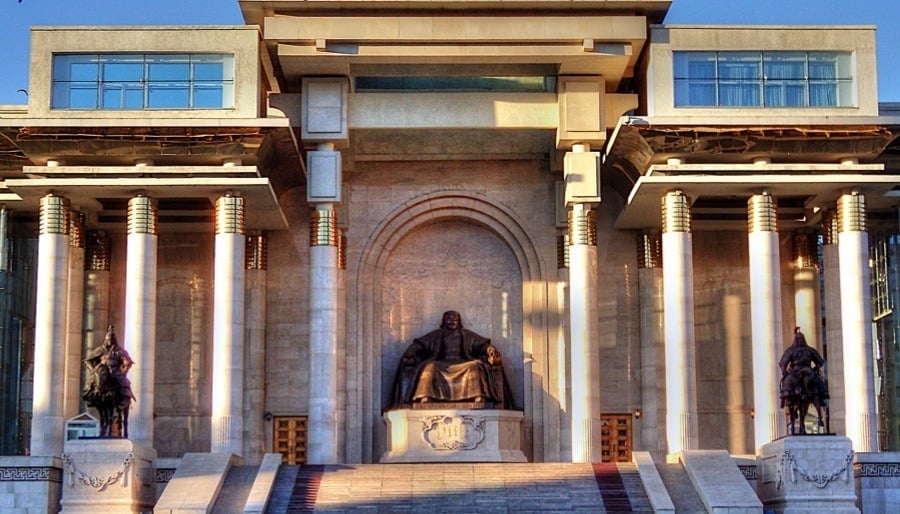 This statue of Genghis Khan in Ulaanbaatar was unveiled in 2006. Source: flickr.com

In 1990, as the Soviet Union was fracturing from the inside out, Mongolian activists marched in the streets and organized hunger strikes in protest of their Communist rulers. The protestors successfully forced the resignation of the government, and the democratic period of Mongolian history began.

Since the expulsion of Soviet influence, Mongolia has almost overdosed on all things Genghis Khan. From vodka brands to school and street names, it is hard to turn a corner without seeing an image of the revered conqueror whose armies subdued twice as much land as any other empire has ever controlled. The country is reveling in a heritage it could not freely express for most of the last century.

Two of the most prominent manifestations of the Genghis glut are massive statues of the old warrior. In one, the Khan sits Lincoln memorial-style and stares out over Sükhbaatar Square, the center-point of the capital of Ulaanbaatar. This statue, which embellishes a wall of the governmental palace, was finished in 2006, the 800th anniversary of the year Genghis Khan united the majority of Mongolian tribes under his control. 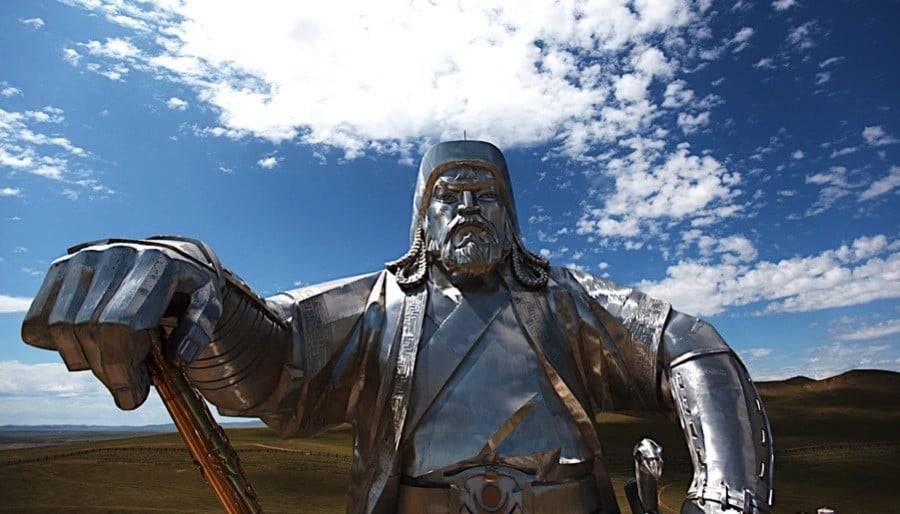 Since the Soviet expulsion in 1990, there has a been second coming of Genghis Khan’s popularity in Mongolia. Source: flickr.com

The other famous mega-statue commemorating Genghis Khan stands over 40 meters (130 feet) tall, about a half-hour drive outside of the capital. Completed in 2008 at a cost of over $4 million, the statue depicts a stoic, victorious Genghis Khan gazing out over the Mongolian steppe.

His message seems clear: leave these people to rule themselves.