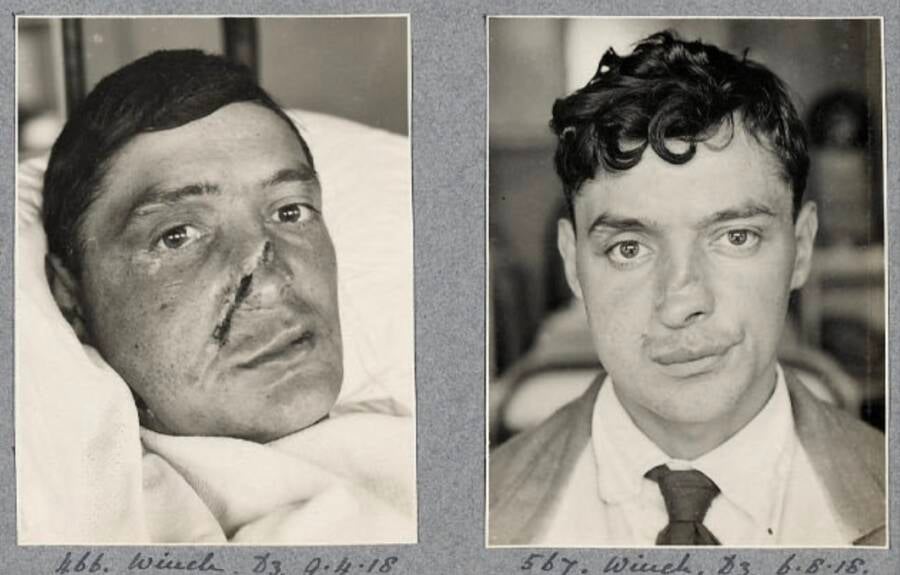 When British soldiers returned from war with these wounds, they were called the “loneliest Tommies.” If they ventured from the hospital, they were told to sit on bright blue benches so the public could avoid looking at them.

But one surgeon named Dr. Harold Gillies was determined to help patients with facial injuries. And in doing so, he pioneered modern plastic surgery. 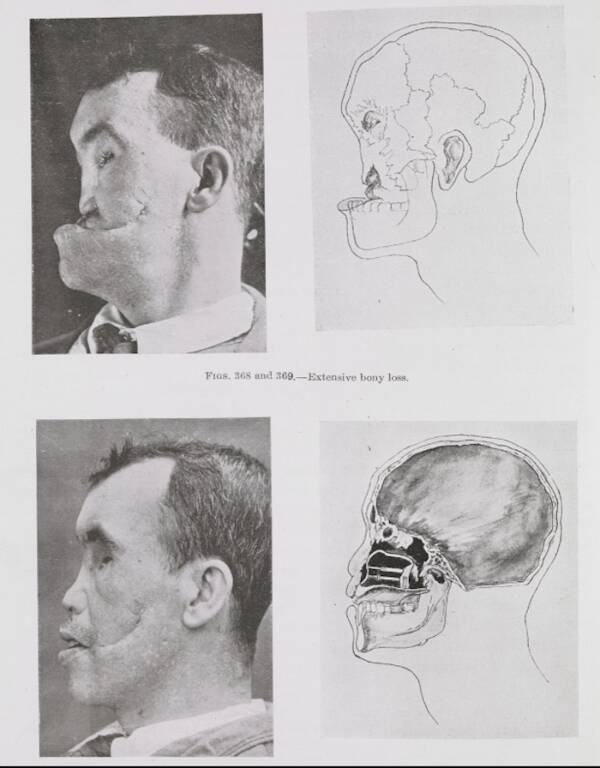 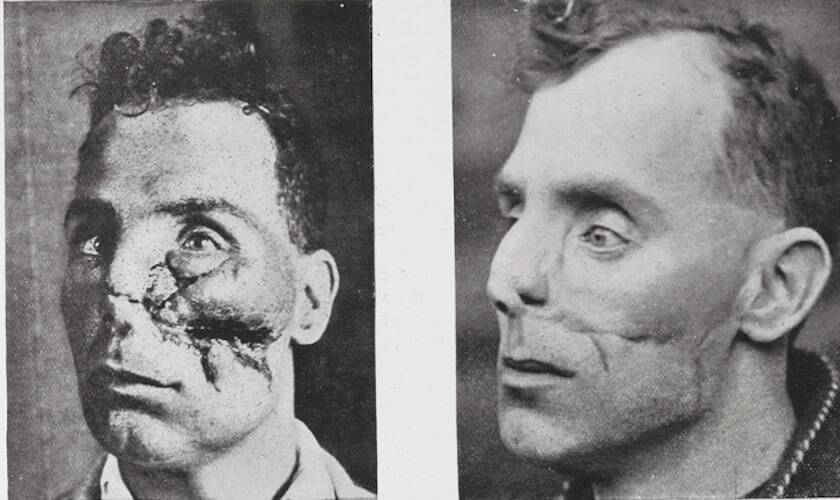 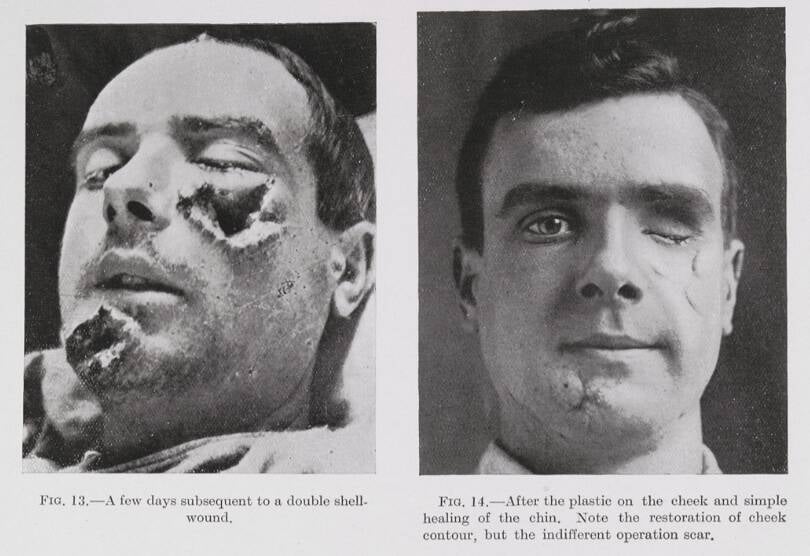 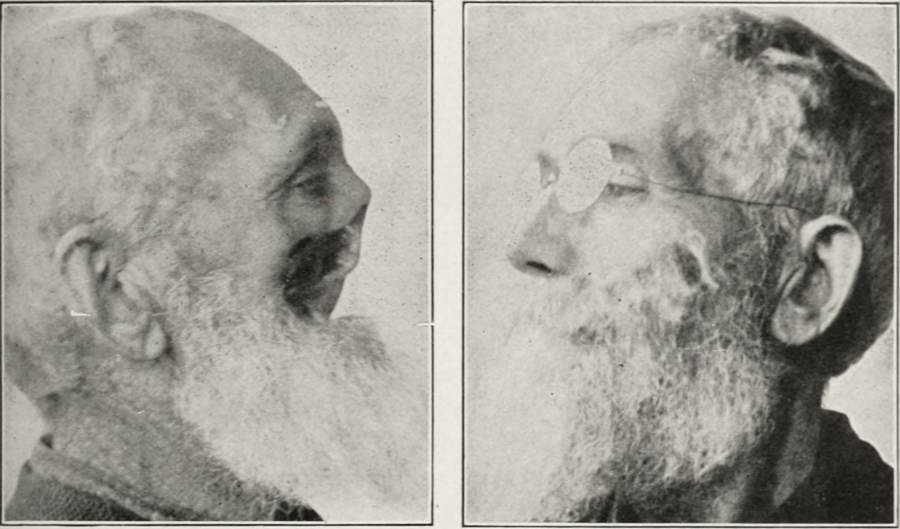 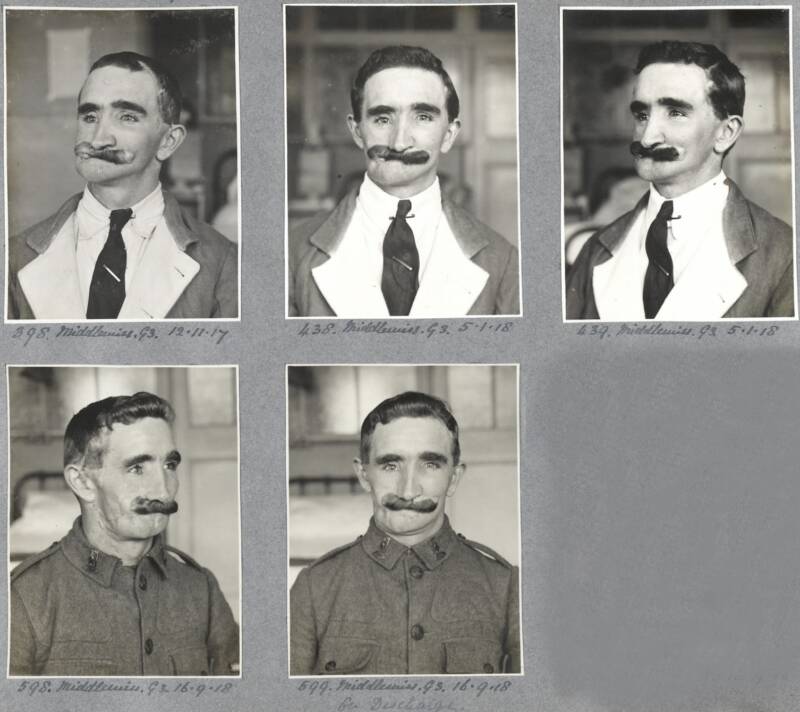 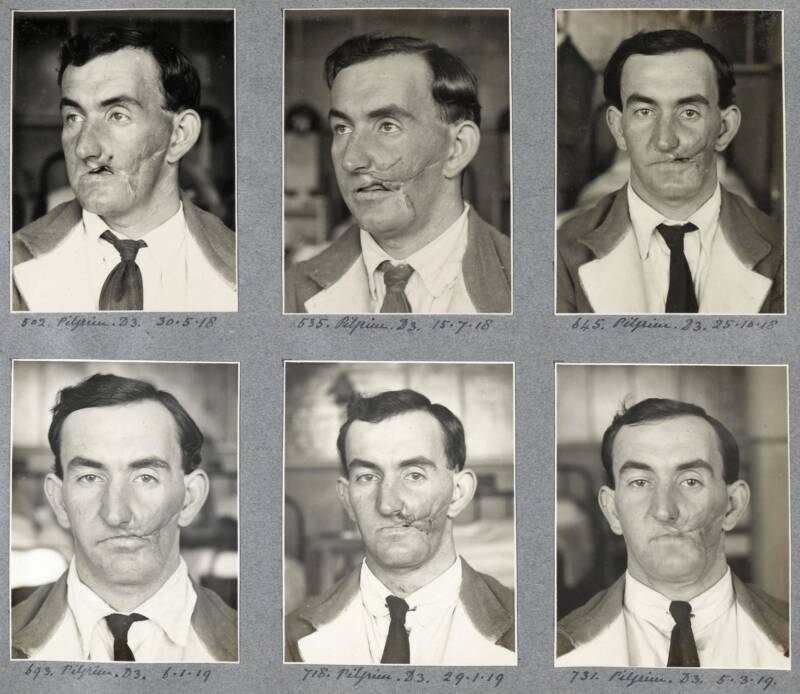 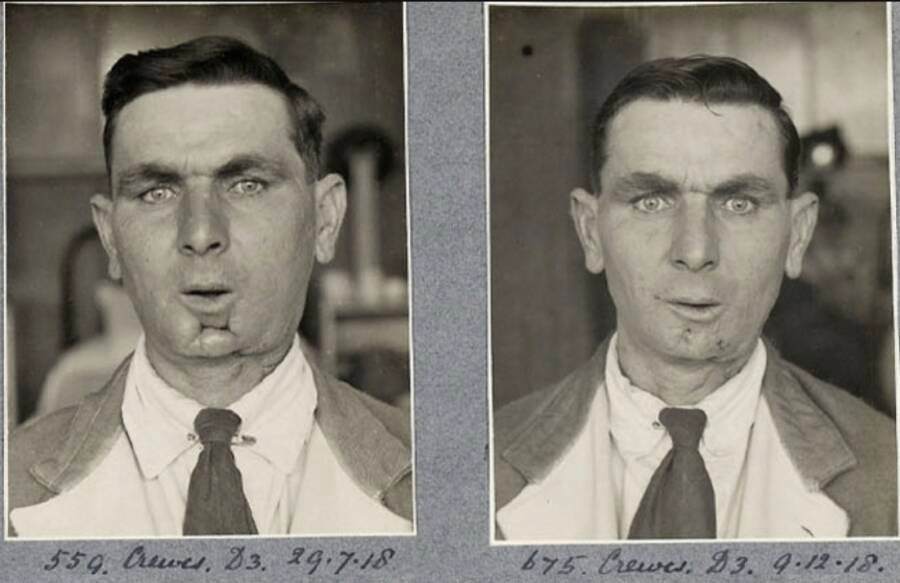 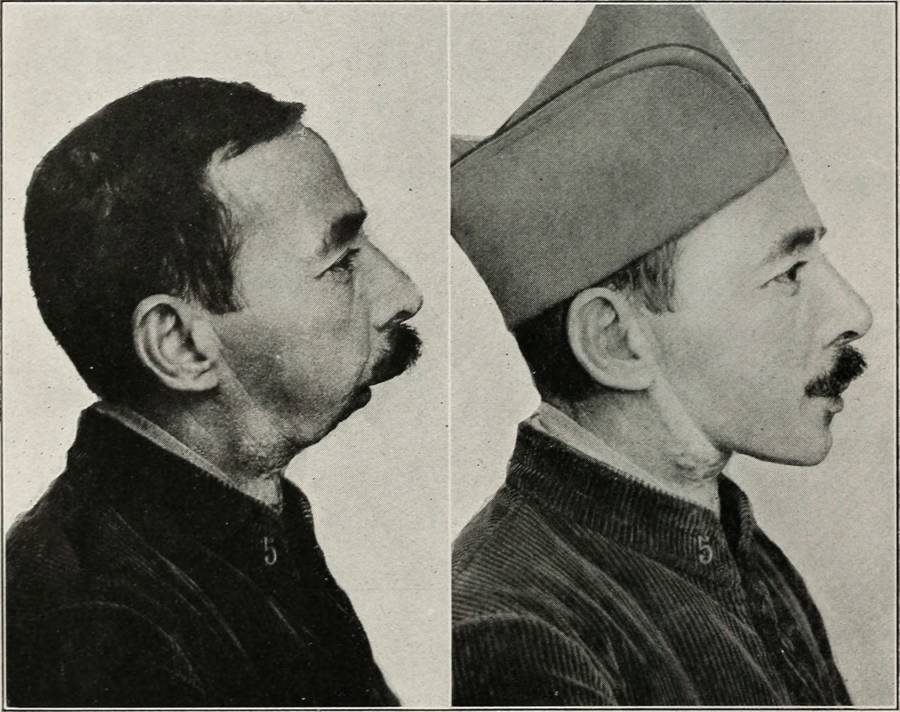 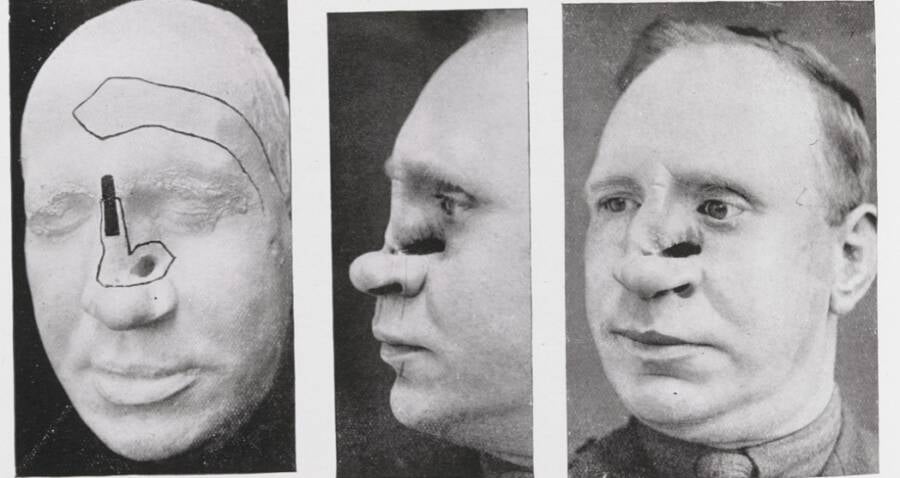 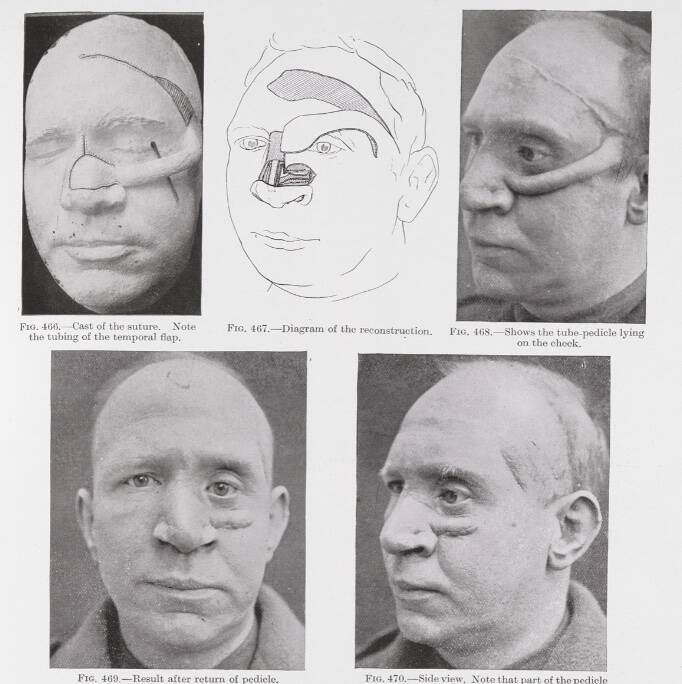 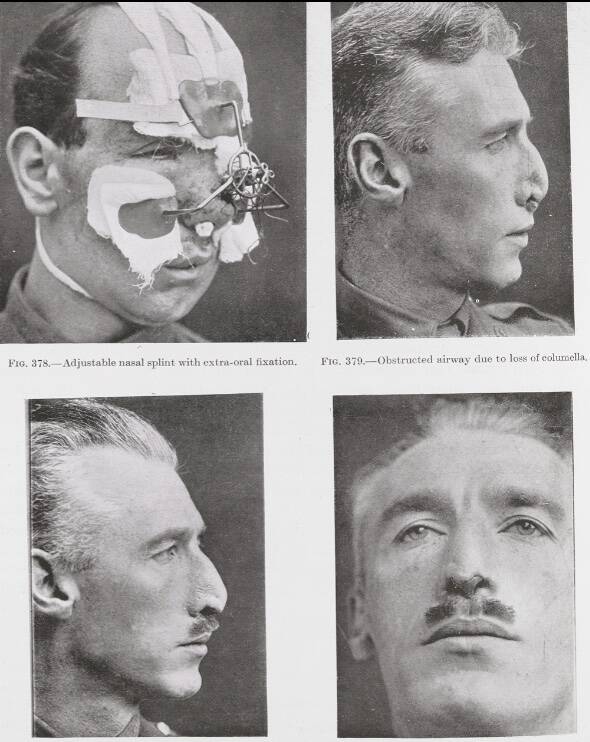 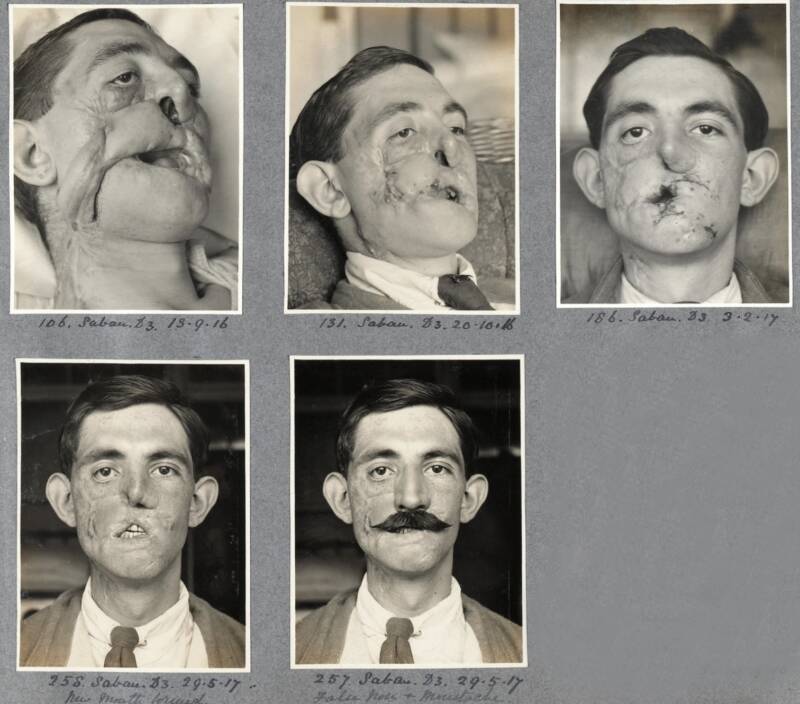 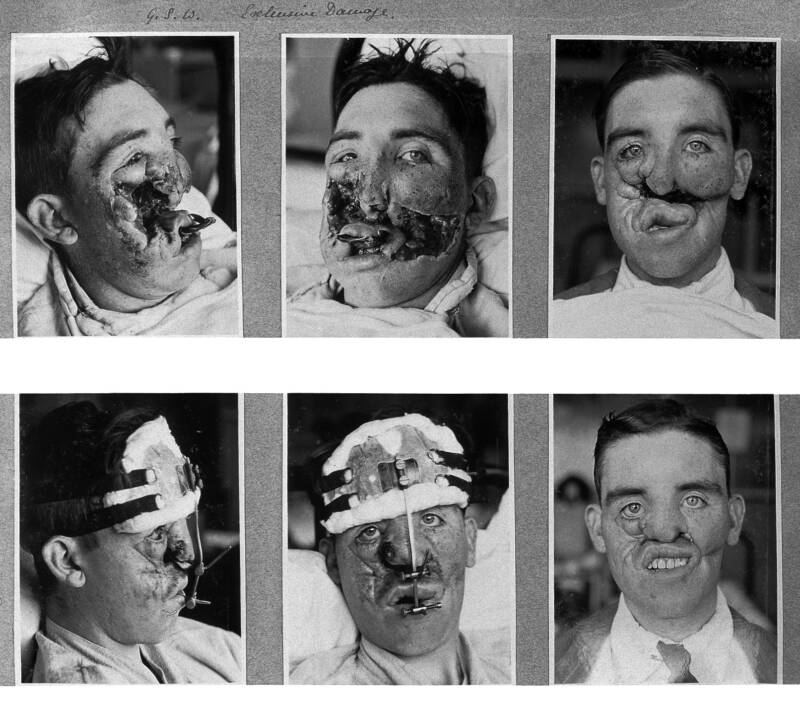 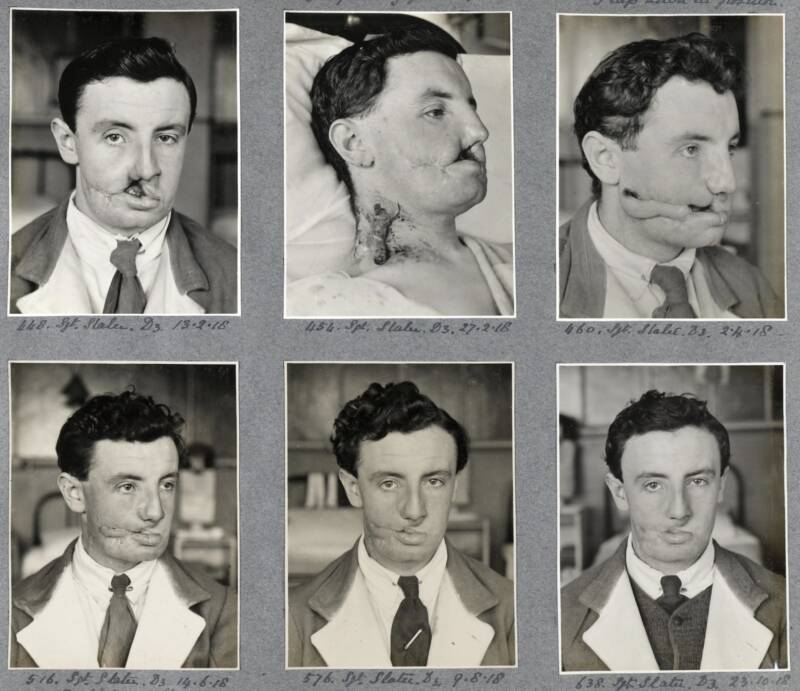 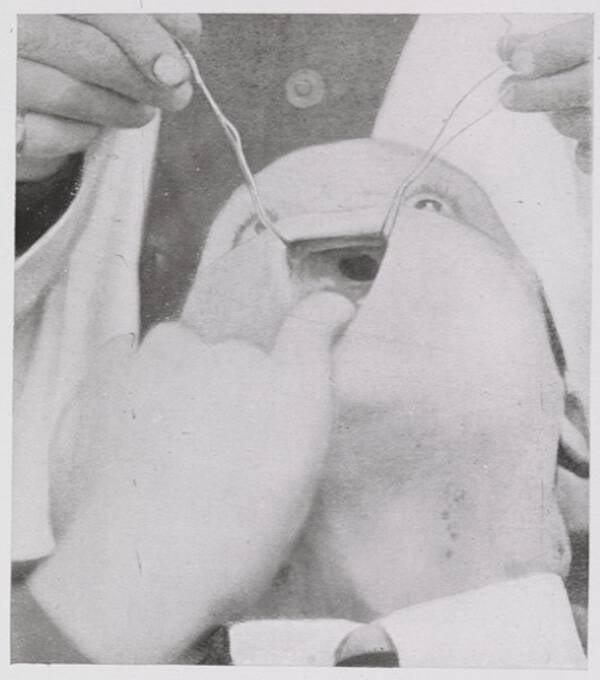 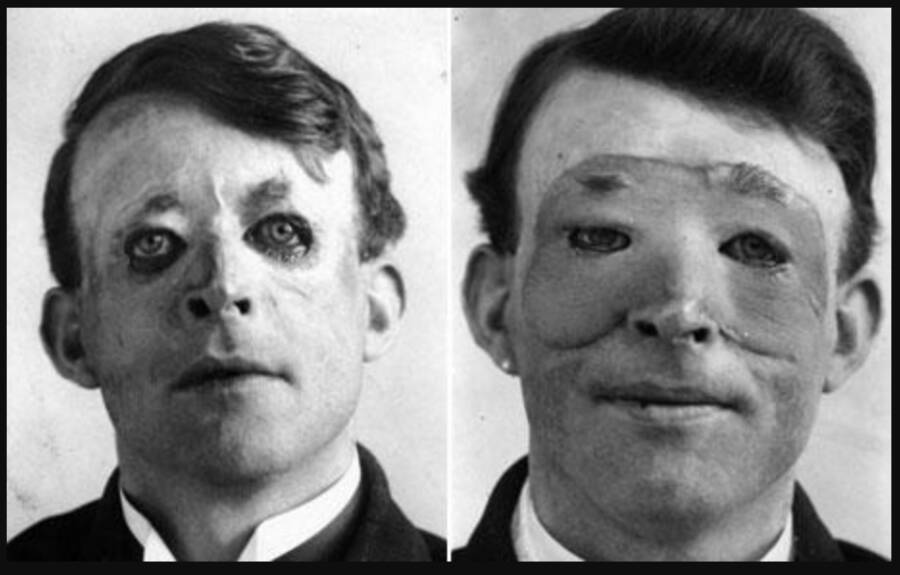 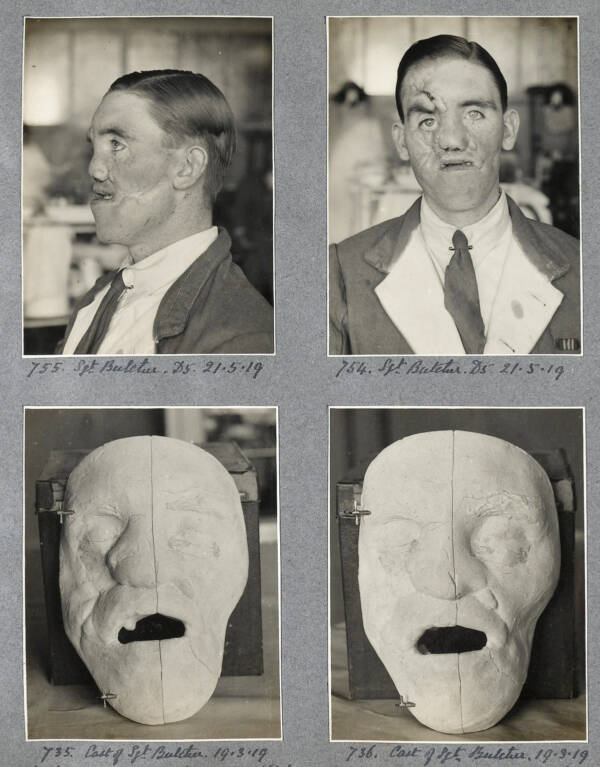 1 of 26
A soldier's mouth injury, which was treated by Dr. Harold Gillies between June and October 1918.The Facemaker
2 of 26
Born in New Zealand and trained as a surgeon in England, Dr. Harold Gillies worked with a team of medical professionals to treat World War I soldiers with facial injuries, such as the man shown in these 1917 photos.The Facemaker
3 of 26
During the Battle of Passchendaele, 19-year-old Sidney Beldam suffered a horrific facial wound. The soldier, who served with the 9th Scottish Division, wasn't expected to survive his injuries. But thanks in part to the work of Dr. Harold Gillies, he lived another 60 years.The Facemaker
4 of 26
Dr. Gillies's book Plastic Surgery of the Face contained examples of how his team rebuilt faces.British Library
5 of 26
Soldiers at Gillies's hospital often required a series of procedures, like this man, who needed extensive reconstruction on his cheek and neck.Wellcome Images
6 of 26
These striking before-and-after photographs show a patient before he was admitted to Gillies's hospital and after he underwent a cheek procedure.British Library
7 of 26
This patient suffered a double shell wound to his face, which Gillies and his team helped repair. British Library
8 of 26
A series of cheek surgeries, which were performed at the King George Military Hospital. Wellcome Images
9 of 26
The first photo in this series includes notes on the reconstructive procedures that would later be used to repair the soldier's injuries.The Facemaker
10 of 26
Dr. Gillies did not use artificial implants. But sometimes, his doctors created custom masks to help the patients cover facial injuries. In this case, the man's glasses helped hold the mask onto his face. Internet Archive
11 of 26
A series of plastic surgeries, performed between November 1917 and September 1918, helped repair this soldier's facial injuries.The Facemaker
12 of 26
A soldier identified as Pilgrim, in a series of photographs taken from May 1918 to March 1919.The Facemaker
13 of 26
Dr. Gillies and his surgical team repaired this man's neck and facial injury between July and December 1918.The Facemaker
14 of 26
Surgeons reconstructed this patient's nose by grafting skin from his cheek. Internet Archive
15 of 26
This patient who lost his chin received a custom molded mask that he could wear. Internet Archive
16 of 26
Dr. Gillies often used casts to plan out the skin grafts that he would use to repair facial injuries.British Library
17 of 26
These photographs show how Dr. Gillies would construct a tube-pedicle to repair certain facial wounds and keep the patient's grafted skin healthy.British Library
18 of 26
Sometimes, facial injuries obstructed airways. In these photographs, Dr. Gillies explains how to restore a person's airways if they sustained such a wound.British Library
19 of 26
Plastic surgery helped this World War I soldier, identified as Saban, recover from a major injury.The Facemaker
20 of 26
A series of major reconstructive surgeries performed at the King George Military Hospital in London.Wellcome Images
21 of 26
During the Battle of the Somme, a man identified as Private Seymour lost part of his nose. Reconstructive surgeries helped rebuild it. The Facemaker
22 of 26
A soldier identified as Slater, in a series of six photographs taken from February to October 1918.The Facemaker
23 of 26
In his book, Dr. Gillies explained how his surgeons repaired damage to airways and facial functions. But aesthetics were also important to him. British Library
24 of 26
English sailor Walter Yeo underwent one of Gillies's first plastic surgeries in 1917. This procedure used grafted skin flaps to treat his facial injuries.Unknown/Wikimedia Commons
25 of 26
Plaster casts played a big role in helping early plastic surgeons reconstruct faces, as seen in these 1919 photographs. And the procedures ultimately paved the way for modern-day plastic surgery.The Facemaker
26 of 26 As trench warfare raged on during World War I, soldiers sustained far more facial injuries than in previous wars. When men ventured above the trench, they could easily be hit with bullets or shrapnel. "They seemed to think they could pop their heads up over a trench and move quickly enough to dodge the hail of machine-gun bullets," complained one World War I surgeon.

In August 1917, a shell fragment hit British soldier John Glubb in the face. "The floodgates in my neck seemed to burst," Glubb later recalled, according to London's National Army Museum. "And the blood poured out in torrents."

Glubb felt as though he had a chicken bone in his mouth. In fact, it was actually half of his jaw, detached and floating around. And although Glubb ultimately survived the war, his life would never be the same. 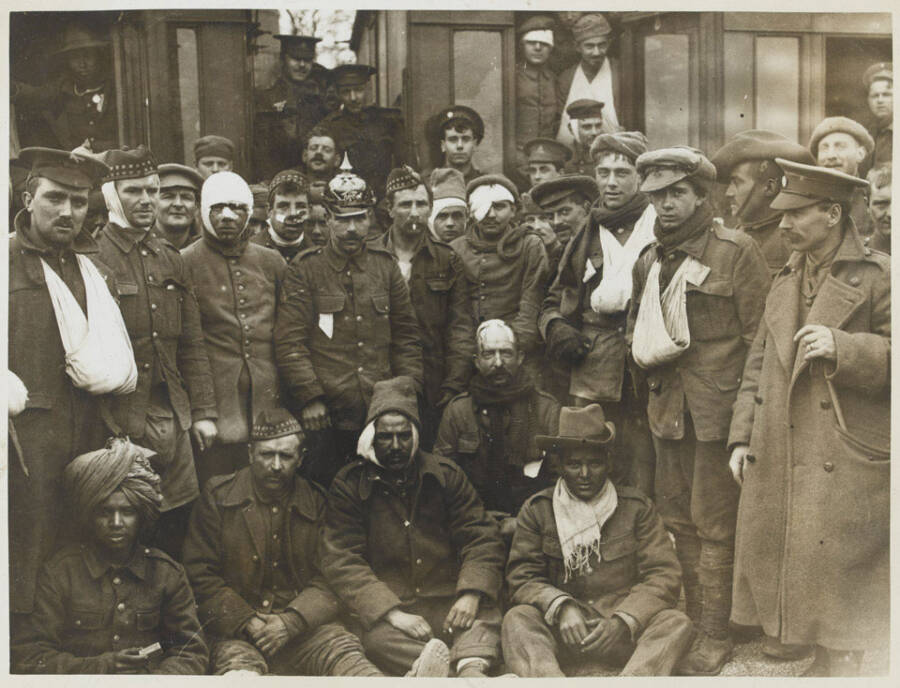 As medical historian Lindsey Fitzharris explained in her Gillies biography The Facemaker, "the reactions could be very extreme" for veterans who returned to civilian life after suffering facial injuries on the battlefield.

"This was a time when losing a limb made you a hero, but losing a face made you a monster," she said in an interview with NPR.

What happened to these wounded veterans? According to inspector Robert Tait McKenzie, who visited convalescent hospitals during the war, these soldiers often became "victims of despondency, of melancholia, leading, in some cases, even to suicide." But then, Harold Gillies stepped in.

The Surgical Treatments Of Harold Gillies

Harold Gillies was one of few medical professionals at the time who focused specifically on treating facial injuries and helping despondent soldiers.

Born on June 17, 1882, in Dunedin, New Zealand, Harold Delf Gillies eventually moved to England for his education and trained to become a surgeon. Though it was clear he had a keen scientific mind, many were also impressed by his skills as a painter. His eye for aesthetics would later help him change thousands of people's lives during World War I.

Shortly after the "war to end all wars" began, Gillies volunteered for the Royal Army Medical Corps. Initially posted to France, he had a front-row seat to the grisly facial injuries that many soldiers suffered there. Gillies was later transferred to England, where he petitioned the British War Office to build a hospital devoted to rebuilding the faces of wounded veterans.

By 1917, he had received permission to open The Queen's Hospital, the first facility in the world that only treated facial injuries. And he got to work. 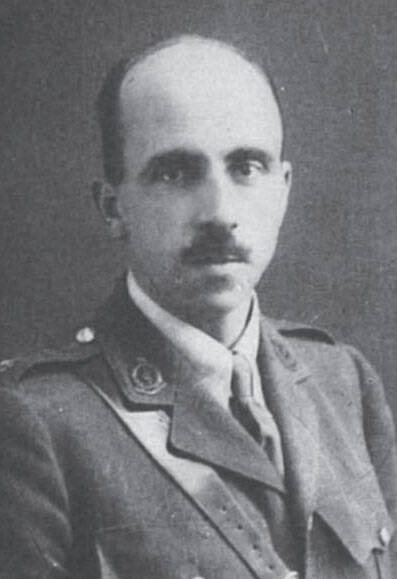 To treat his patients, Gillies worked tirelessly on developing new methods to rebuild bones and skin grafting techniques to reconstruct soft tissue. Remarkably, he also banned mirrors in some sections of his hospital so that newly wounded soldiers wouldn't be upset when they saw their injuries.

But of course, Harold Gillies couldn't do all the work by himself. He soon realized that his hospital would require specialists. Mask makers created custom masks for patients, while dental surgeons helped rebuild jaws and mouths. X-ray technicians captured images that showed the extent of the damage. And his fellow surgeons performed multiple procedures to heal patients.

As Fitzharris explained, "Gillies is really operating without a net... He doesn't have anybody teaching him how to do this. He's really got to make this up."

As a pioneering plastic surgeon, Gillies did not rely on artificial implants. Instead, he believed in replacing skin with skin. When repairing bone, the surgeon often took bone from the patient's body. Certain body parts like ribs and thighs provided cartilage and bone to rebuild the face.

As he worked, Dr. Harold Gillies balanced two goals. He wanted to restore the face's function, making it possible for men to eat and speak. But he also prioritized aesthetics. Gillies wanted his patients to reenter society without worrying about the stigma attached to facial injuries in the early 1900s.

"This was a strange new art," Gillies said of his plastic surgery work, "and unlike the student today, who is weaned on small scar excisions and gradually graduated to a single harelip, we were suddenly asked to produce half a face."

World War I ended in 1918. But the need for plastic surgery continued. Ultimately, Gillies provided more than 11,000 operations for over 5,000 men from 1917 to 1925. And many of his patients were grateful for his services. 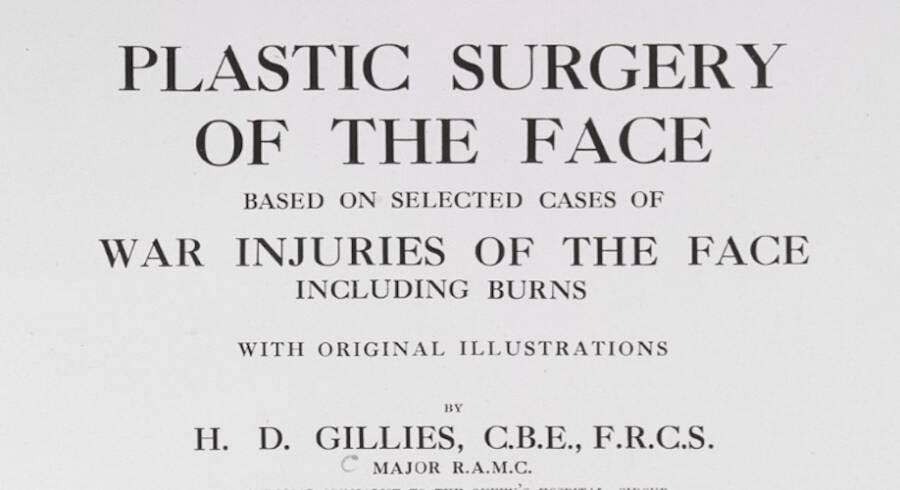 Gillies then continued in private practice for years. When World War II broke out, he once again leaped into action to help British soldiers.

But even during times of peace, Gillies did whatever it took to improve his patients' lives — performing some of the first sex reassignment surgeries on transgender people during the late 1940s and early 1950s.

Indeed, Dr. Harold Gillies remained devoted to his work even in his final days. He died in London at age 78 on September 10, 1960 — shortly after he suffered a stroke while performing an operation on a patient's leg.

After reading about Harold Gillies, learn about Walter Yeo, the soldier who underwent one of the world's first plastic surgeries. Then, check out more early plastic surgery before-and-after photos.