The Heinous Crimes Of Henry Lee Lucas And Ottis Toole, The Confession Killers 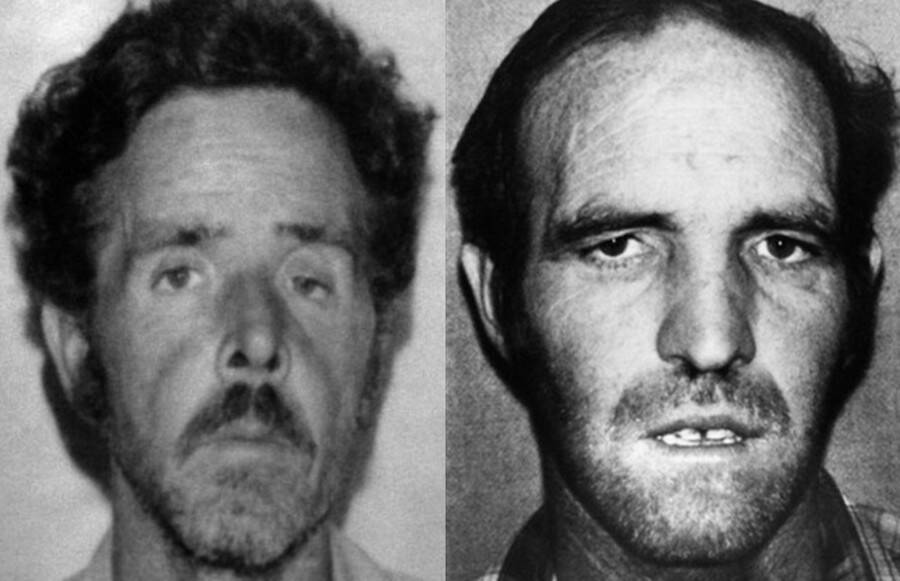 Henry Lee Lucas and Ottis Toole killed hundreds of people together. Or so they claimed.

In the 1970s, this serial killer couple embarked on a horrific murder spree across the United States. They raped, killed, and even cannibalized unsuspecting victims wherever they went. And if Lucas is to be believed, they killed more than 600 people together — an astounding claim.

But the truth is, no one knows how many people Lucas and Toole killed. After their arrests, police were eager to hear them confess to countless murders — which helped them close a number of unsolved cases.

Unfortunately, it was later revealed that Lucas and Toole were not telling the truth about all of these crimes they supposedly committed. Thus, they would go down in history as the “Confession Killers.”

But within the folds of their falsehoods lie some terrible truths. Henry Lee Lucas and Ottis Toole may not have killed hundreds. But they did kill — violently and indiscriminately. 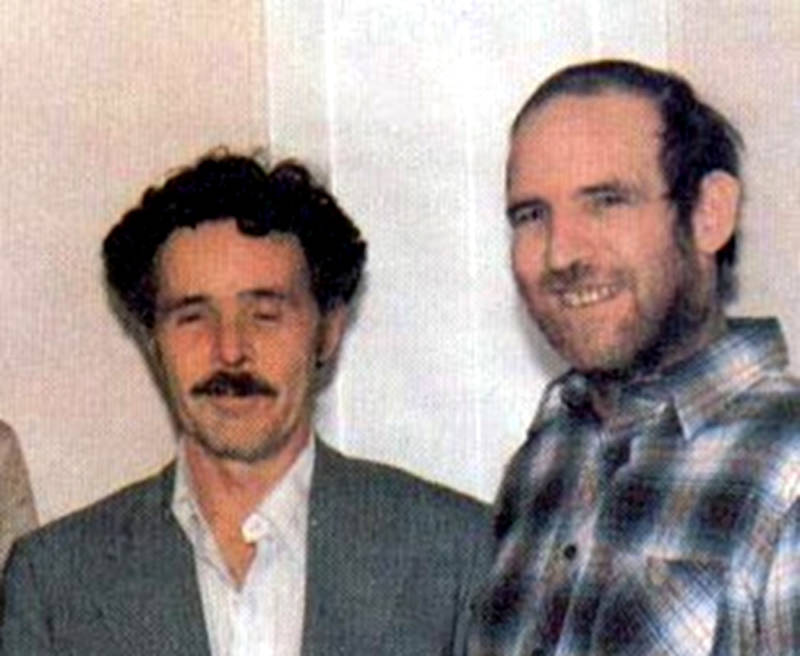 Henry Lee Lucas and Ottis Toole met in 1976 at a soup kitchen. They quickly became lovers, jumpstarting a relationship that was based on mutual attraction — and a mutual desire to kill.

Both Lucas and Toole had been raised by abusive mothers who had forced their sons to dress like girls. Both had suffered sexual trauma before the age of 10. And by the time they met, both were already murderers.

In fact, Lucas had already served 10 years in prison for the murder of his mother. He had killed her in 1960 — when he was 23 years old.

“All I remember was slapping her alongside the neck,” Lucas would later tell the police. “When I went to pick her up, I realized she was dead. Then I noticed that I had my knife in my hand and she had been cut.”

Lucas had long despised his mother for abusing him. He also hated the fact that she was a sex worker — and forced him to watch as she serviced customers. When he was just 10, he lost an eye because his mother ignored an infection for too long. By the time Lucas reached puberty, he channeled his rage into torturing animals and sexually assaulting his own brother.

As for Toole, his childhood was just as bad — if not worse. He was assaulted by almost every person he thought he could trust. His mother dressed him up as a girl, his older sister raped him before he was 10 years old, and his father prostituted him to a neighbor when he was only five.

When he was just 14 years old, Toole killed a person for the very first time. After a traveling salesman tried to pick him up for sex, Toole ended up running him over with his own car.

Drawn together by shared childhood trauma, Henry Lee Lucas and Ottis Toole quickly fell for each other. And when they realized that they both had a taste for blood, they soon embarked on a cross-country killing spree. 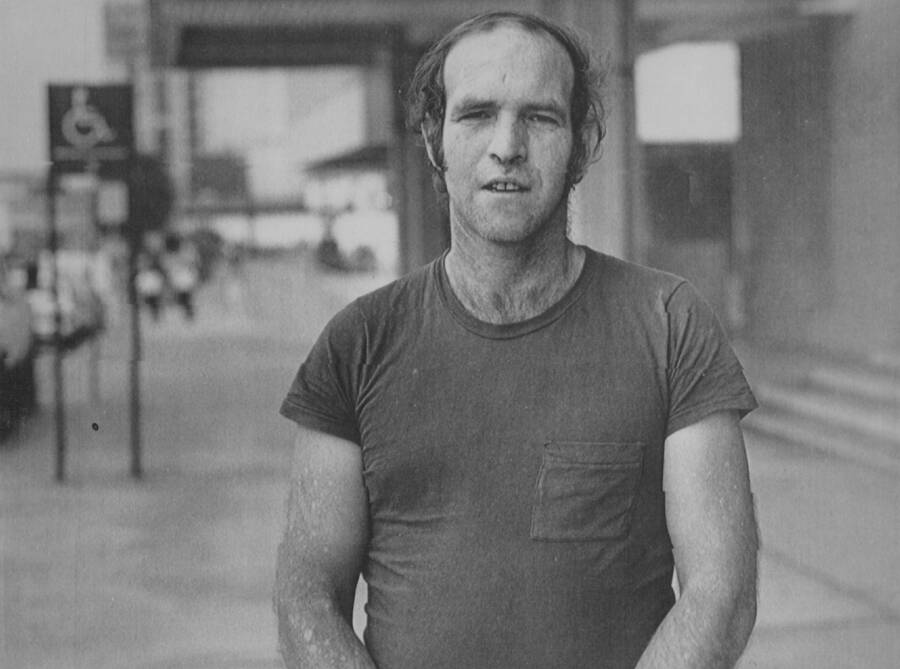 Getty ImagesOttis Toole in custody in front of a police station in Jacksonville, Florida.

Henry Lee Lucas and Ottis Toole traveled across 26 states in the 1970s, killing wherever they went. They preyed upon anyone they could find — including hitchhikers, sex workers, and migrants.

For Lucas and Toole, killing was just a way for the young couple to bond. They talked about it openly, comparing notes and giving each other tips.

Lucas later claimed that he coached Toole on how to get away with murder. “He was doing his crimes all one way,” Lucas said. “I started to correct him in his ways, in doing the crime where he wouldn’t leave information.”

But Lucas and Toole didn’t just kill. Often, they would rape and torture their victims before murdering them. And after their victims were dead, the couple would mutilate the bodies. Lucas later said that they didn’t feel the slightest amount of guilt for their actions. He even joked that he once crossed two state lines with someone’s severed head in the backseat.

As if that weren’t bad enough, the serial killer couple also dabbled in cannibalism. Years after their arrest, they were caught discussing cannibalism over a prison phone. Toole sounded almost nostalgic.

“Remember how I liked to pour some blood out of them?” he asked Lucas. “Some tastes like real meat when it’s got barbecue sauce on it.” 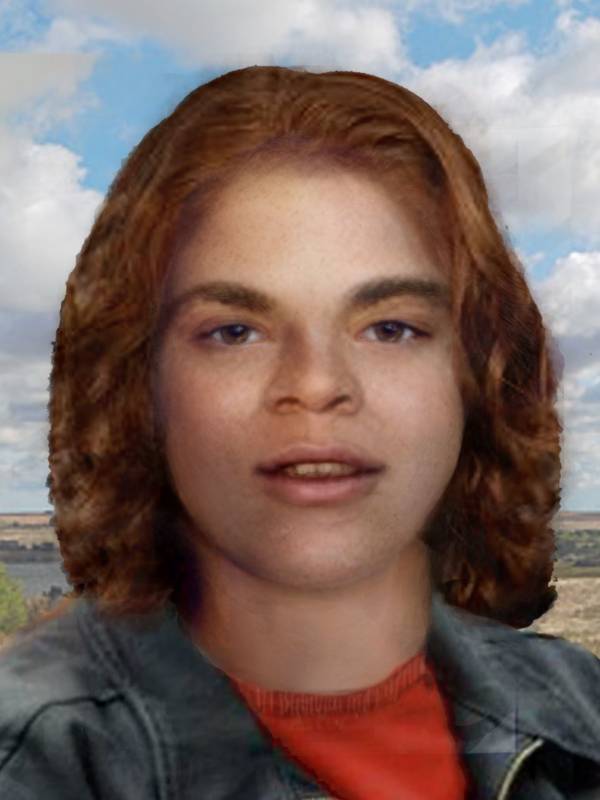 Wikimedia CommonsA police recreation of one of Lucas’s alleged victims. She was known as “Orange Socks” — because that was the only item of clothing found on her mutilated corpse. Georgetown, Texas.

While it might seem like these two terrifying men were made for each other, their relationship fell apart when Henry Lee Lucas became interested in Ottis Toole’s teenage niece, Becky Powell. Lucas later said that he liked having someone look up to him — so he ran off with her and left Toole alone. Toole was so upset that he allegedly killed nine people just to blow off steam.

But Henry Lee Lucas and Becky Powell didn’t make it very far. While they apparently settled down on a ranch in Ringgold, Texas, the two soon got into a heated argument. In response, Lucas lured Powell to an isolated field. He then killed her, dismembered her body, and scattered the remains.

Then, Lucas lured the woman who owned the ranch out to the same field, killed her, and stuffed her body into a drainage pipe.

Soon afterward, Lucas was arrested in Texas in 1983. Meanwhile, Toole was separately imprisoned in Florida in 1984 for burning a 64-year-old man alive.

At long last, the killer couple was behind bars. But the mystery behind their murder spree had just begun. 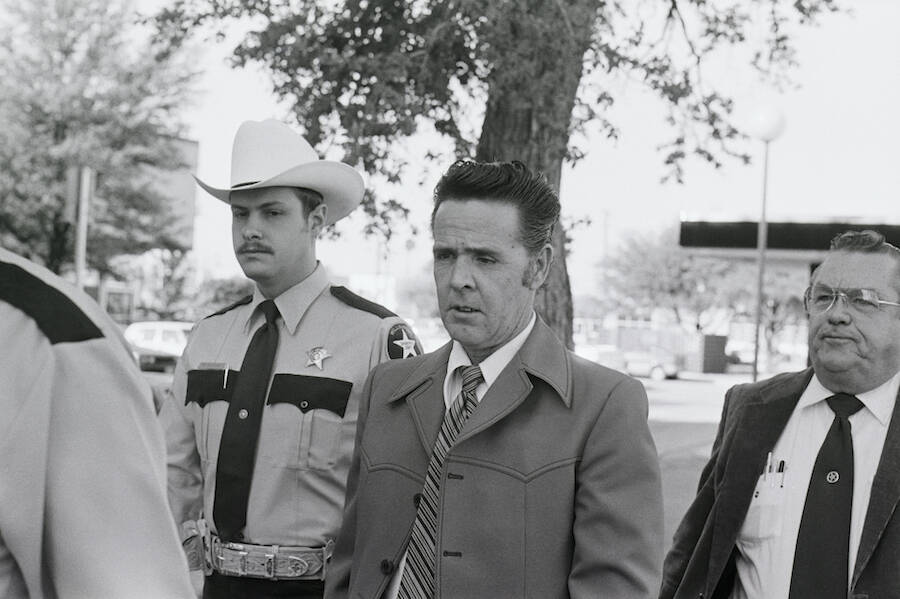 Getty ImagesHenry Lee Lucas is escorted to his capital murder trial by the police.

Surprisingly, Henry Lee Lucas wasn’t arrested for murder. He’d been snagged for possession of a deadly weapon. But once he was in custody, he began to talk about his murders to any police officer who would listen.

As for Ottis Toole, he was far more reluctant to talk about his crimes at first. But once he learned that Lucas was taking cops on guided tours of their murder sites, Toole soon began backing up his former lover’s claims. By his count, they’d murdered 108 people — including 6-year-old Adam Walsh, the son of future America’s Most Wanted host John Walsh.

Toole insisted that he was the young boy’s murderer. He even argued with the police when they doubted his claims. He told them, “Oh, no, I killed him, too, there’s no doubt about that.”

According to Toole, he had snatched the child from a Sears parking lot in 1981. After decapitating the young boy with a machete, Toole drove around with the head in his car for so long that he forgot it was there. When he later happened upon it, he simply tossed it into a canal.

Walsh was perhaps one of the most well-known victims killed by Toole or Lucas — since his murder would result in new child protection laws and his father getting into television and criminal justice. 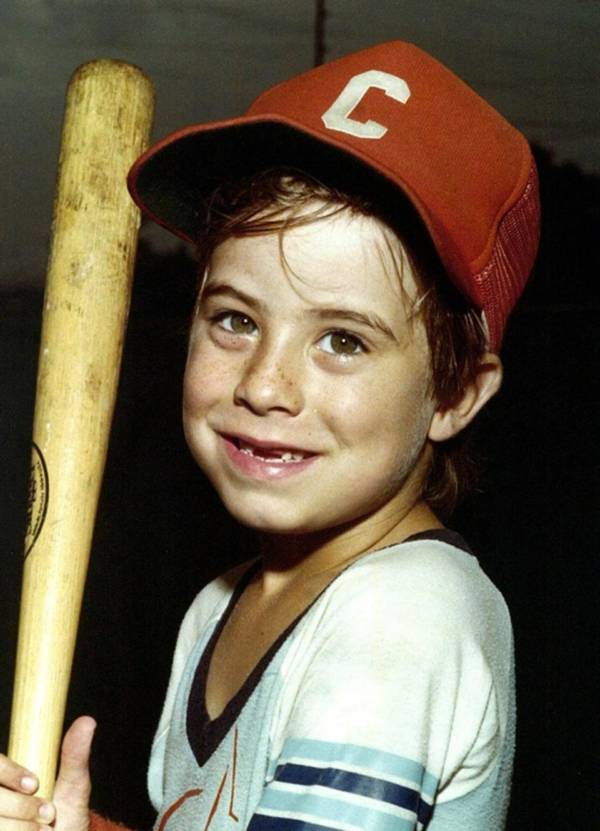 Meanwhile, Lucas readily confessed to more than 600 murders. But he had his own motivations for doing so, far beyond bringing the truth to light.

“I made the police look stupid,” Lucas later boasted. “I was out to wreck Texas law enforcement.”

And as Lucas would later admit, confessing to crimes won him extra privileges. The police would often drive him out to the scene of the crime and even let him get fast food on the way.

For a man who had already been sentenced to death row, confessing to murder upon murder was just a way to spend some time outside. 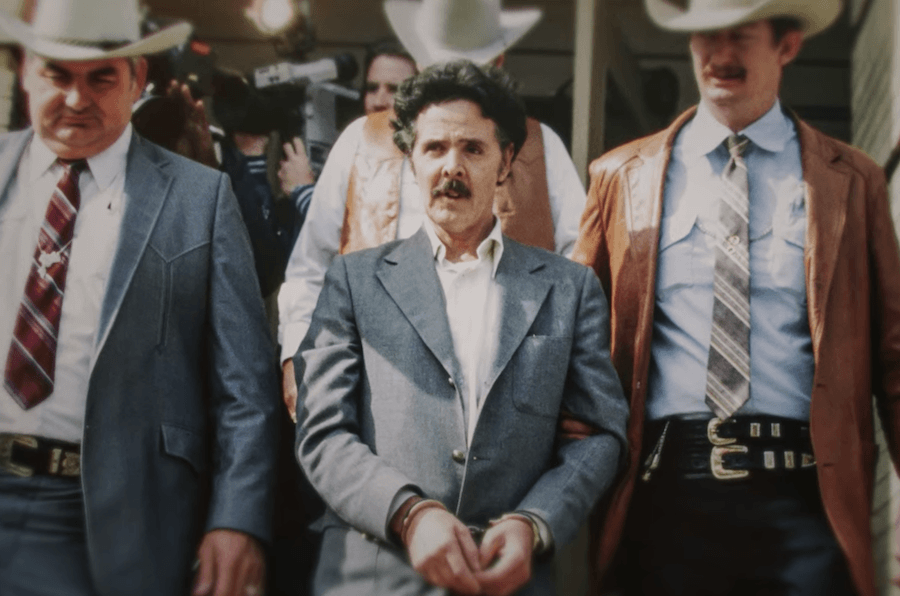 NetflixA still from the 2019 Netflix docuseries The Confession Killer.

For a long time, police took Henry Lee Lucas and Ottis Toole at their word.

Lucas’s confessions were so plentiful that they led the Texas Rangers to establish a “Henry Lee Lucas Task Force,” assigned to oversee his crimes.

In turn, Lucas offered the Rangers gratuitous and grisly details of every single murder he confessed to. He even drew detailed pictures of his alleged victims — much like another prolific serial killer named Samuel Little. Eerily, Lucas’s pictures were so precise that they even included eye color.

But then, his confessions began to slowly unravel. 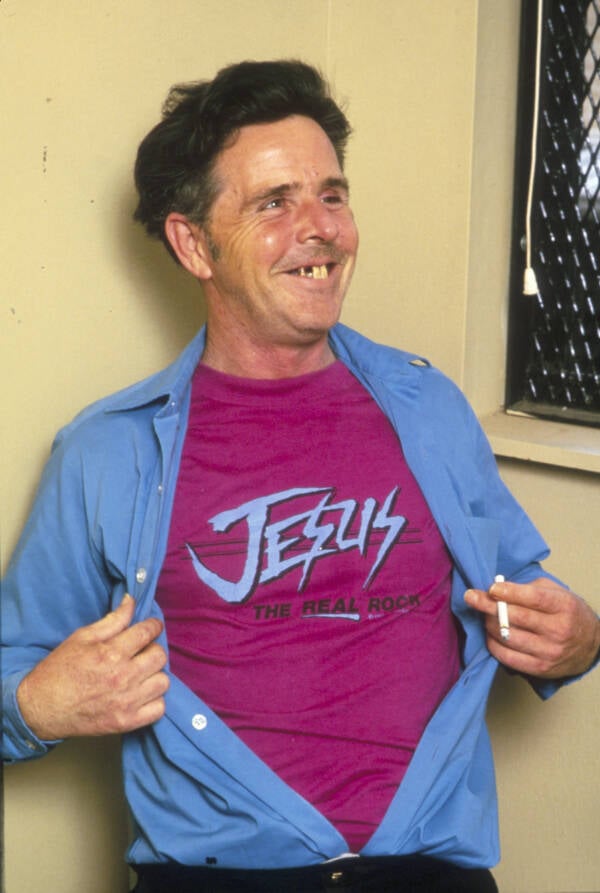 Getty ImagesHenry Lee Lucas in the Williamson County Jail in 1979.

As time went on, law enforcement began to pick up on some major discrepancies in Lucas’s timelines. Plus, DNA testing began to contradict some of his stories. And on top of that, Lucas didn’t offer much hard evidence to back up his increasingly farfetched tales.

It was later revealed that some members of the task force assigned to him secretly provided him with evidence and asked him leading questions in an attempt to get more confessions. That said, some Texas Rangers remained convinced that he was telling the truth about at least some of the murders.

“I remember him trying to cop to one he didn’t do,” said retired Texas Ranger Glenn Elliott. “But there was another murder case where I’ll kiss your butt if he didn’t lead us right to the deer stand where the murder took place. Ain’t no way he could’ve guessed that, and I damn sure didn’t tell him.”

Lucas himself admitted to exaggerating — and making up stories. “I only got three [murders],” he claimed. “But they’re (law enforcement officials) goin’ wild every time I tell ’em about some more.”

Given Lucas’s habit of lying, it’s impossible to know what his real body count was. The same goes for Ottis Toole. A 2019 Netflix docuseries called The Confession Killer tried to get a little closer to the truth. But to this day, no one is exactly sure how many people Henry Lee Lucas and Ottis Toole killed.

The Horrific Legacy Of The Confession Killers 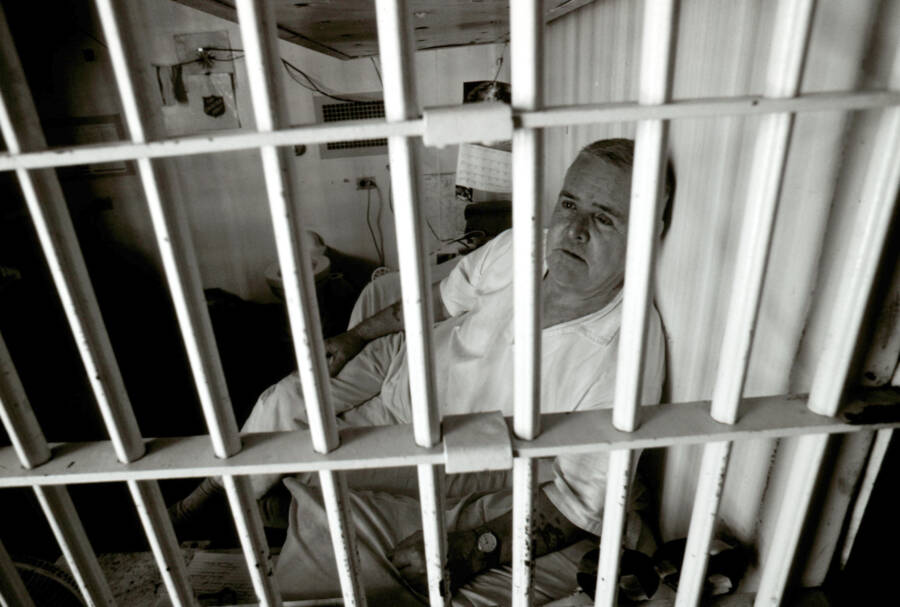 Getty ImagesHenry Lee Lucas in prison in 1997. He was eventually pardoned from death row and sentenced to life imprisonment.

There’s no telling how much of Henry Lee Lucas and Ottis Toole’s story is true. A district attorney named Ken Anderson who prosecuted Lucas said he believed the murderer had killed anywhere from three people to a dozen.

“I don’t think he knew exactly,” Anderson said. “It’s difficult to imagine you can rely on anything he said, but the fact remains he was a serial killer, even though we’re unable to pinpoint the exact number.”

To this day, many people are still trying to get to the bottom of this twisted, bizarre story. Other than The Confession Killer docuseries, two other documentaries and four films have been made about this case, including the critically acclaimed Henry: Portrait of a Serial Killer.

But the real number of murders may never be known. And tragically, the potentially false confessions from the killers have had horrifying consequences for the families of murder victims. They went from feeling a sense of closure that Lucas and Toole were behind bars to questioning whether those men had even killed their loved ones in the first place.

In the worst-case scenario, the real killers behind some of the fake confessions might even still be out there. It’s no wonder why some families have been lobbying to get cases reopened.

Not only did Henry Lee Lucas and Ottis Toole murder people, but they also left a scar of uncertainty that the families of murder victims feel to this day. And that may be one of the worst parts of their horrific legacy.

After reading about Henry Lee Lucas and Ottis Toole, take a look at serial killer Edmund Kemper, whose story is almost too gross to be real. Then, learn about Richard Speck, the man who killed eight women in one night.