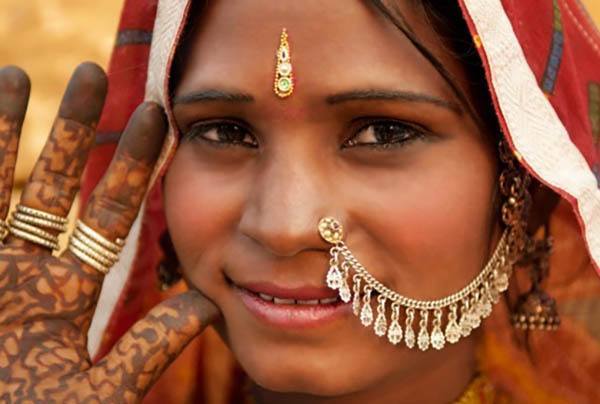 The first recorded mention of nose rings is in Genesis 24:22. When Abraham decides to find a wife for his son Isaac, he chooses Rebekah, and gives her a gold nose ring to seal the deal.

According to The Naked Woman: A Study of the Female Body by Desmond Morris, “it is still a common practice among the Berber and Bedouin peoples of North Africa and the Middle East, where the husband gives his bride a gold nose ring when they are married. The size of the ring indicates the wealth of the family, and, if a divorce occurs later, the rejected wife can use the gold in her nose to provide her with financial security.”

Mughal emperors brought the practice to India in the 16th century. A stud or ring is often worn in the left nostril by women, as the left side is associated with female reproductive organs. The piercing is supposed to lessen the pain of birth and menstruation.

Nose piercings didn’t reach the West until the 1960s and 1970s, when hippies started traveling to India, and were taken up by the punk movement in the ‘70s as a sign of nonconformity.