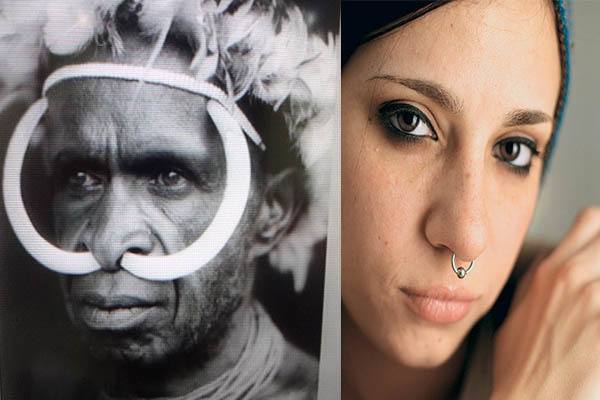 Septum piercings are common across many cultures. Left, a member of the Asmat tribe. Right, an American woman. Image Source: Pin Image

Septum piercings are quite common among tribal peoples, often used to make warrior men look fierce. The Asmat tribe in Irian Jaya, Indonesia will stretch these piercings to as much as 25mm in diameter, allowing for the leg bone of a pig or the femur of a killed enemy to be placed within it.

The Aztecs, Mayans, and Incas pierced their septums with gold and jade to symbolize the water and sun gods, a practice still kept up by the modern day Cuna Indians in Panama.

In India, Nepal, and Tibet, an amulet called a bulak is attached to the piercing, often so big that it has to be lifted so that the person with the piercing can eat. It is believed that piercing the nose prevents infection, though the bulak itself seems to be purely ornamental — and the bigger, the better.

Among the Aborigines in Australia, the piercing is used to flatten the nose and therefore make it more “beautiful.” 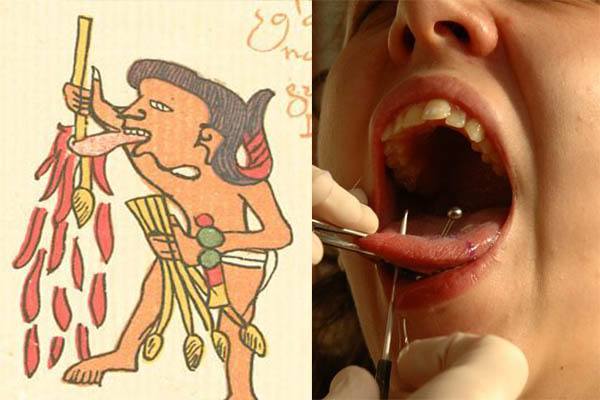 Not much has changed since Aztec times. Image Source: WordPress

Between the 14th and 16th centuries, tongue piercings originated as a ritual among the Aztecs and Mayans as a form of blood sacrifice. They would often pass a thread through the piercing to enhance the flow of blood. Priests and shamans in these cultures would also pierce their own tongues to create an altered state of consciousness so they could communicate with the gods.

20th century carnies learned about tongue piercings from religious ascetics, and would perform them as a sideshow attraction. Its resurgence came in the 1980s, with the opening of Gauntlet in LA, the first professional piercing shop in the US. Elayne Angel, who founded Gauntlet, is often credited with promoting the piercing, both for shock value and for the enhancement of oral sex.